Explore Day, a Hike and a Drive and Meeting Readers

I went over to Gaelyn’s rig this morning and said how about a walk in the desert to check that stuff out over there.

We could see an old wind mill and some other stuff in this direction so that’s the direction we started out on our hike. 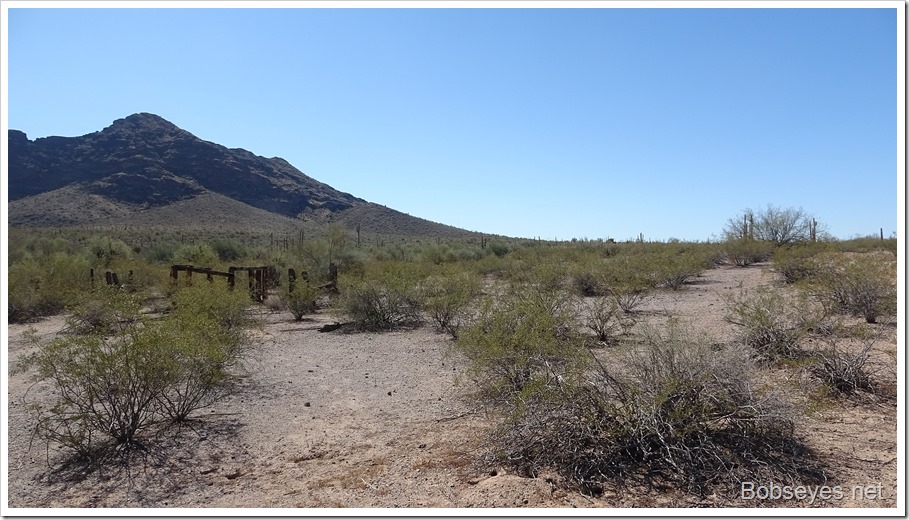 We had to pick our way through the bushes sometimes turning back to find another way. I put the boss up ahead to flush out any snakes. :O) 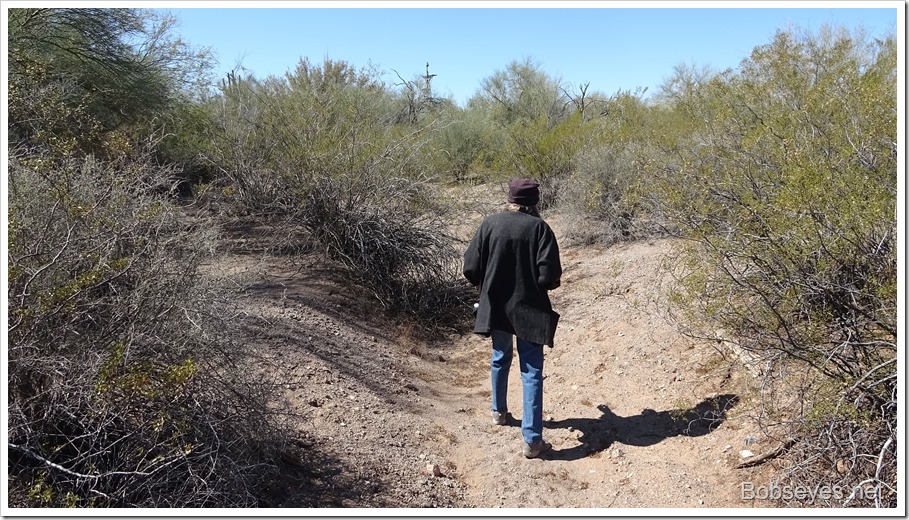 As we got closer we could start to make out what we saw from a distance. It appeared there was some old mining stuff behind a gate with a private property sign on it so we didn’t enter, although we should have as there was no one around. 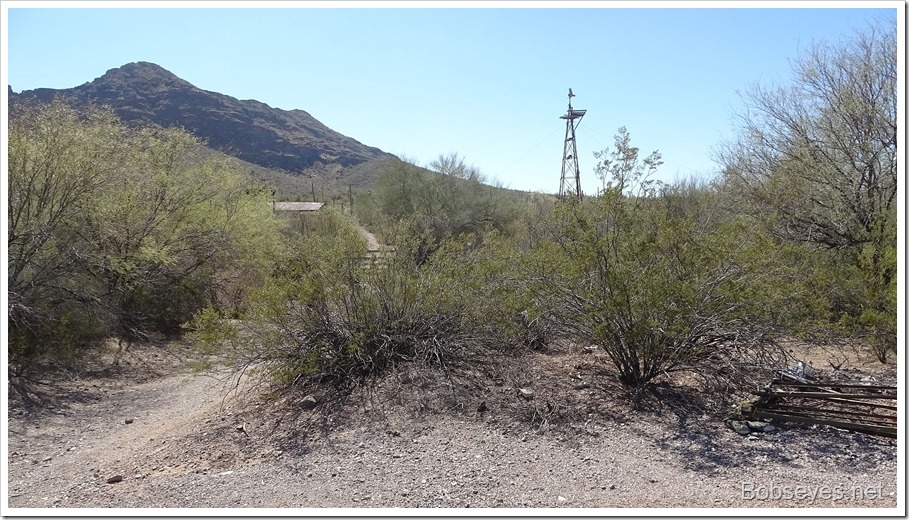 After leaving the mining area we continued to make a circle slowly headed back to camp going through here. In the background are part of the tailings from the huge Ajo mine and Ajo is on the other side of them. 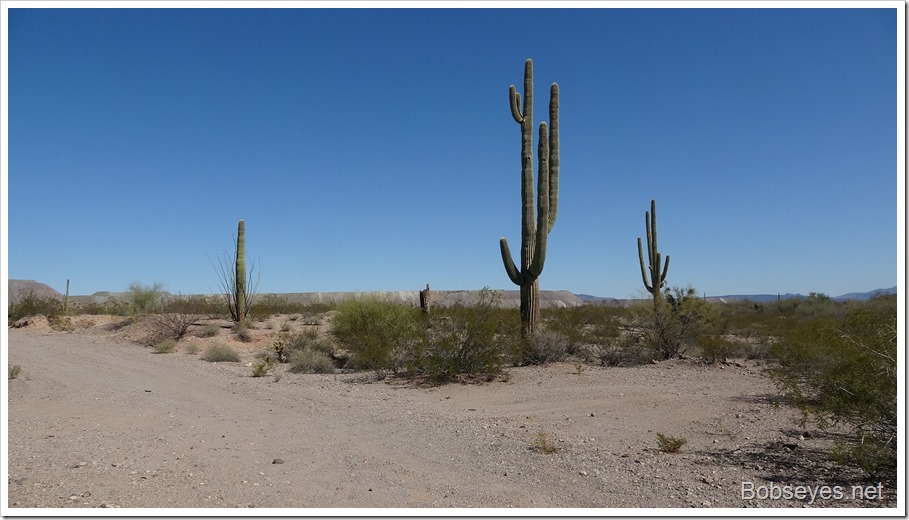 We stumbled onto this big flat that looked like an old mining site. 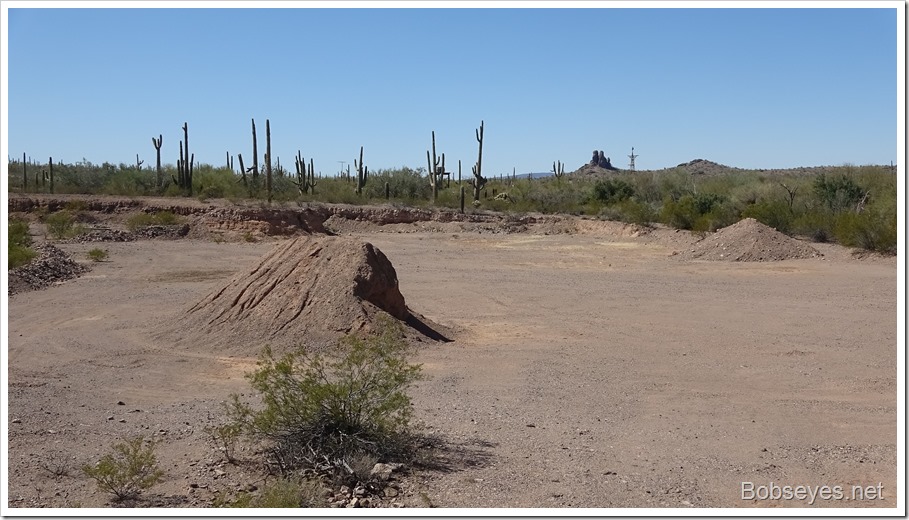 I checked out this cactus and thought, ouch. The cactus teaches one quick around here.. 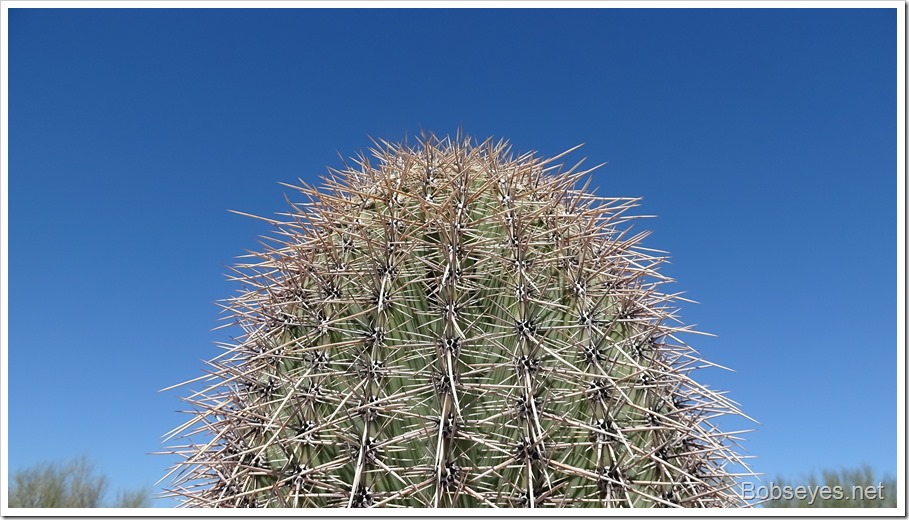 We walked through this spot , a fairly lush area. 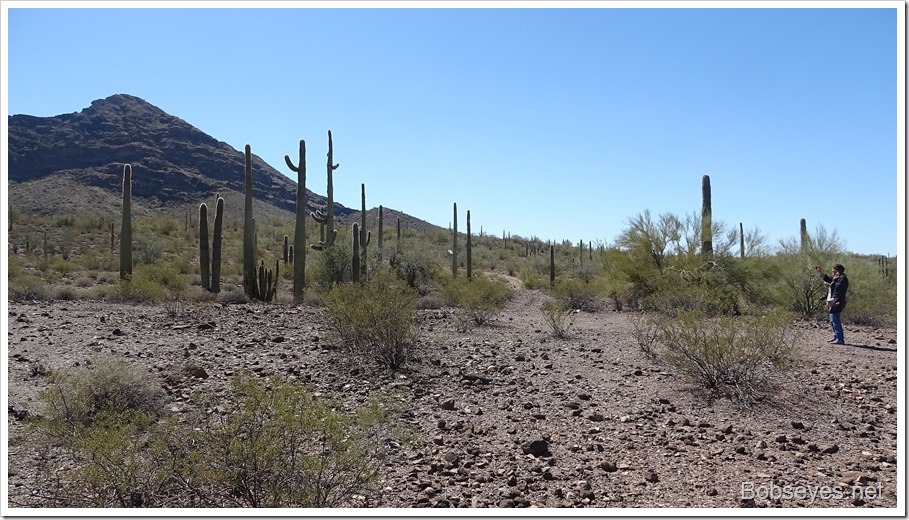 I spotted some sticks on the ground and a lot of little white plastic jars and asked Gaelyn if she knew what this really is and she did. A mining claim. She decided to make a video  of it but she had a hard time reading the paper that was in the jar as the wind was blowing a bit. I heard a bit of cussing from her direction. 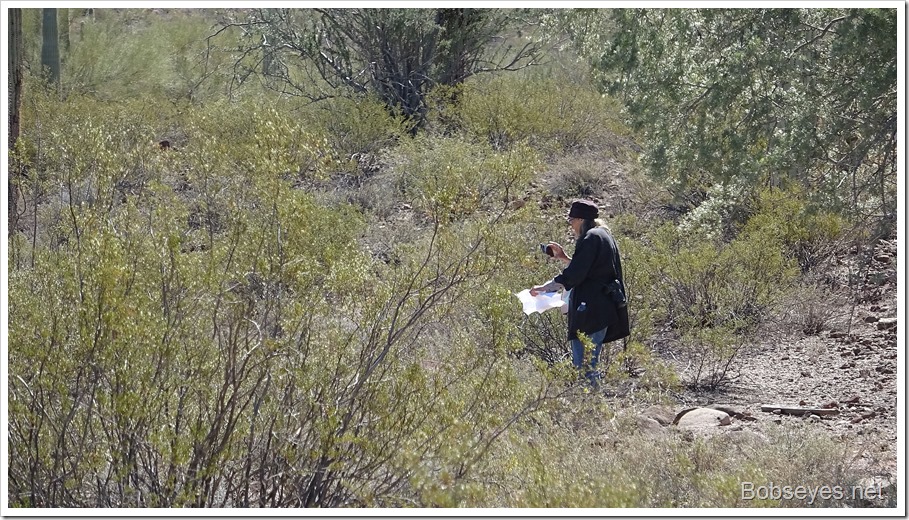 We made it back to the van and it was nap time for me.

Around two I told Gaelyn it was time to take the van out for a ride so she got her stuff together and joined me. We planned to continue out a road off Darby road called Bates Springs road to see where it went and what was out there.

We stopped here to take some photos. 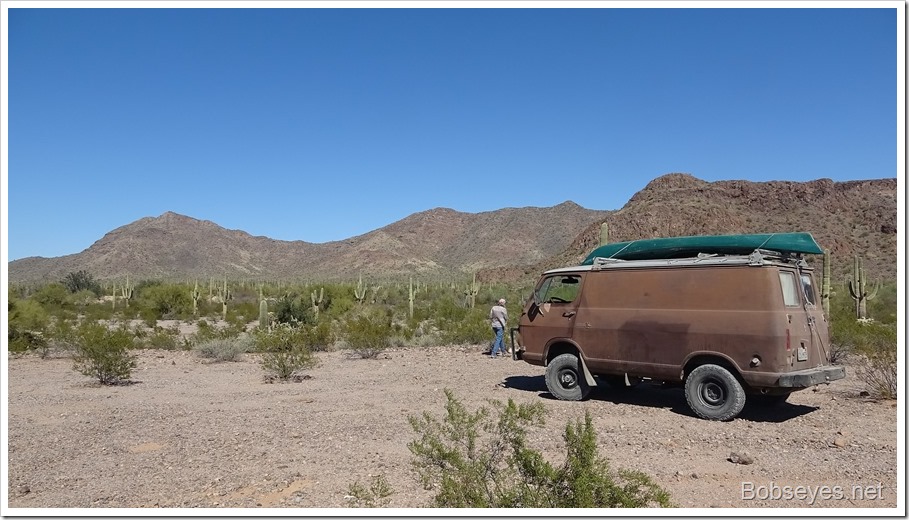 The road was fairly good with some washboard but not much traffic. Another photo shoot spot. We did that a lot. 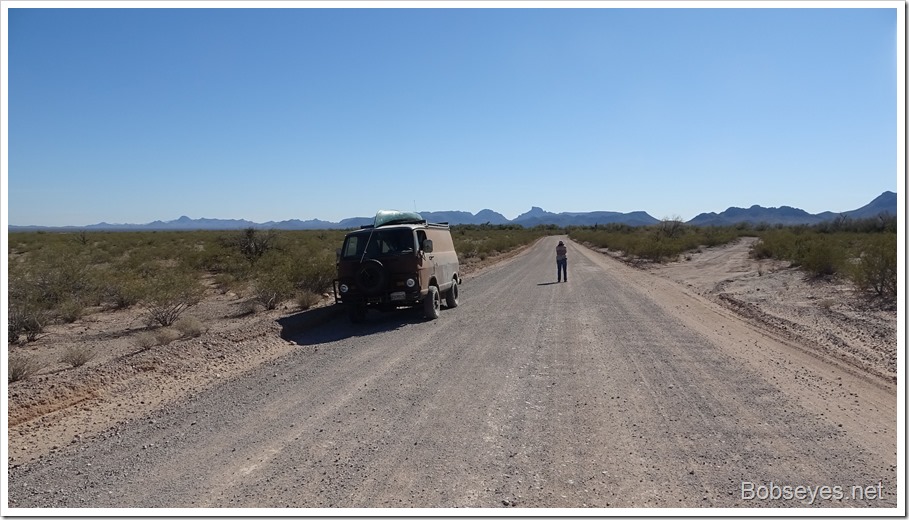 We were pulled over in a big parking area taking a break when a truck with a camper came down the road and pulled in where we were parked as if to ask a question and that’s what he did.He says to me, who’s taking care of the chickens? What? It took me a minute to realize he  must be a reader. We chatted for a bit then they took off down the road to a camp spot they like.

As they took off another truck comes up the road that Gaelyn knew, Paul. We shot the bull with him for a bit then I had to drag Gaelyn off as she can be a real chatter box. :O)

We continued on down the main road a couple more miles then turned around and started back, intending to check out the place the BobKat guys went to camp.

We drove into the road they were on and went down the road to check out the camp spots. On the way back we stopped to shoot the bull for a good bit. I said I likely won’t remember your name because of older age stuff and they said, it’s easy, I’m Bob and his wife was  Kathy, or Bobkat. That’s my spelling as I think they spell it Bobcat.

Here’s their rig parked at their camp spot. 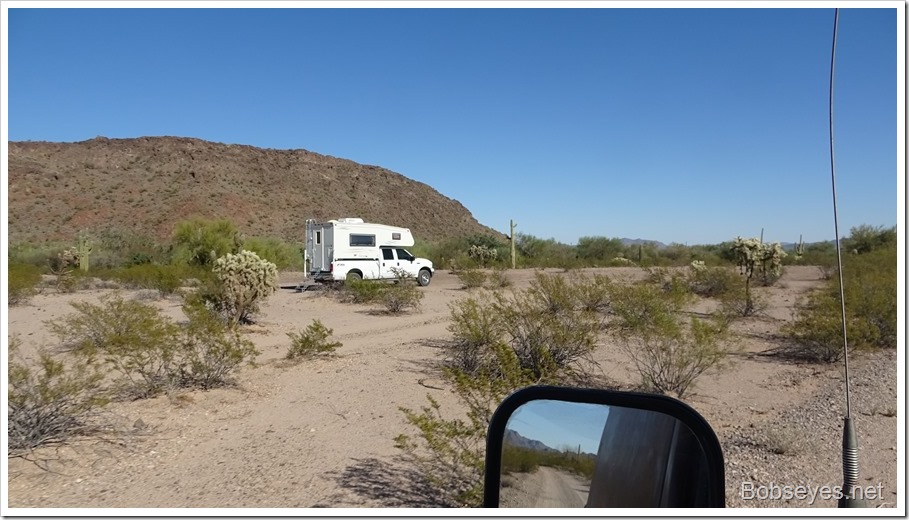 Here’s the Bobcat’s with their two little doggies. We’ll likely see them again tomorrow as we plan to move our camp over to this spot. 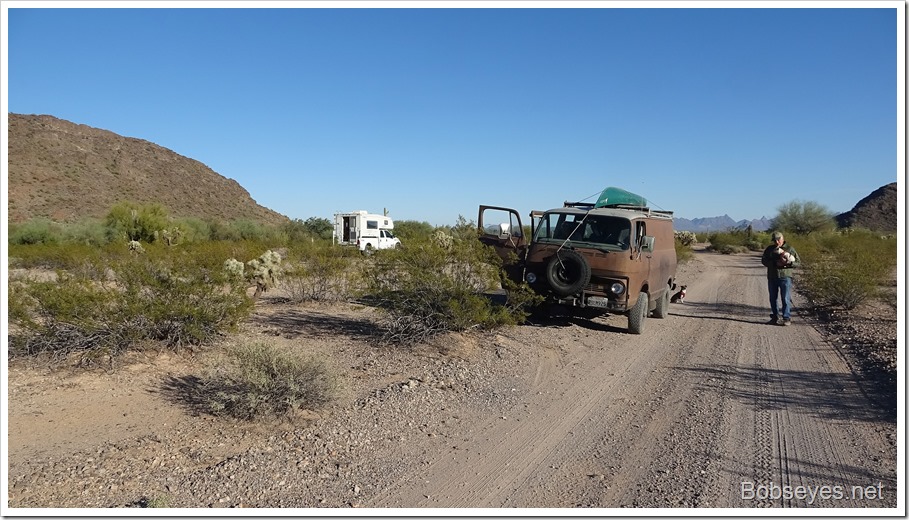 This area is a fairly lush area so the cactus are pretty big and dangerous. 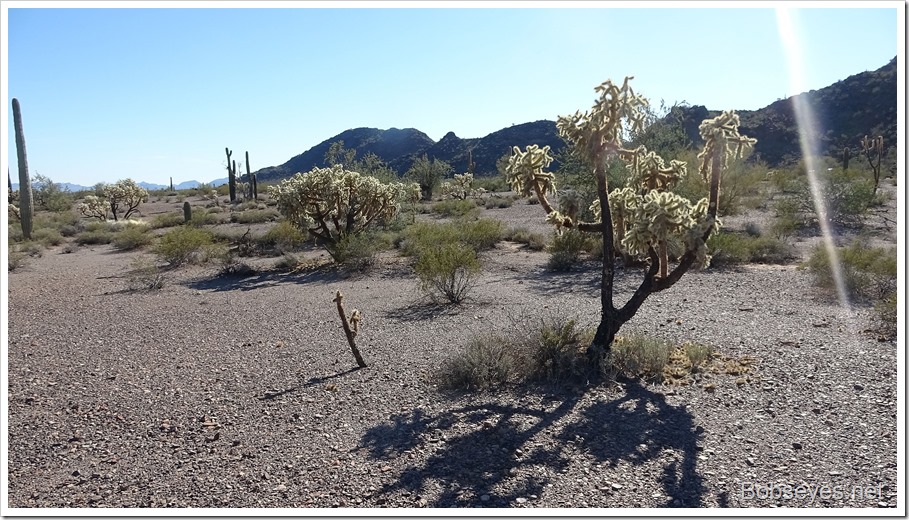 We drove on back to camp and took it easy for the rest of the day.

I spotted these two ants doing their best to haul away this clump of sugar I’d dropped. 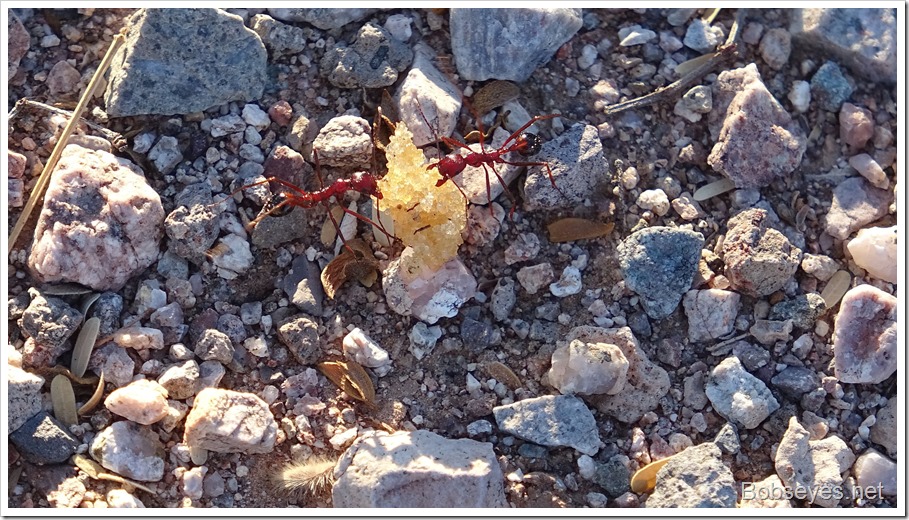 5 Responses to Explore Day, a Hike and a Drive and Meeting Readers