I tended the peeps keeping them out of trouble, ate some cherries and raspberries and worked on the old well a bit and had a good nap in the afternoon.

Around 5 I decided to go down to the river for an evening paddle, even though it was a weekend and I usually don’t paddle on weekends leaving the river to all the other people.

As I pulled into the boat ramp area I had a surprise. The whole boat ramp was full of kayaks pulling out for the day and so it was all blocked up with a group of rental yakkers waiting to be picked up.

They don’t know any better

Well these types of people have no boat ramp edicute which isn’t really their fault but the rental people don’t educate them as they aren’t too bright to do it in the first place. When a large group of people gets out of the water they should carry their boats up to a pickup place and not block the whole ramp waiting for the pickup trucks to come.

Anyway I pulled up to the top of the boat ramp and got out to inform them that I would be backing my car down to the water and they better move it.

Just as I was ready to back my car down one of their trucks pulls in and takes cuts and backs on down. I mentioned it to the guy but he just ignored me so I told him to get it going and get loaded and out of my way.

I know better then to get mad so I kept my cool and waited for them to clear out and put my boat in the water.

Here’s the river as I put my boat in the water. 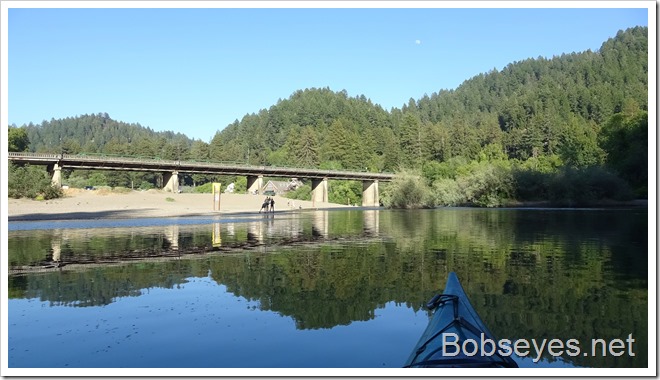 I turned and headed down the river going by this night heron which I don’t see that often around here, especially in this spot. 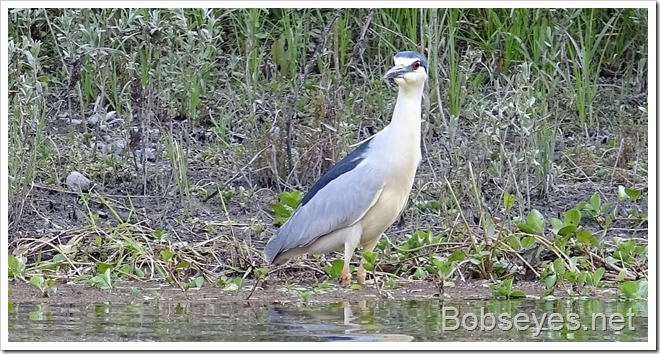 I continued on down the river and could see some fog up ahead where I was going but it  moved out when I got there. 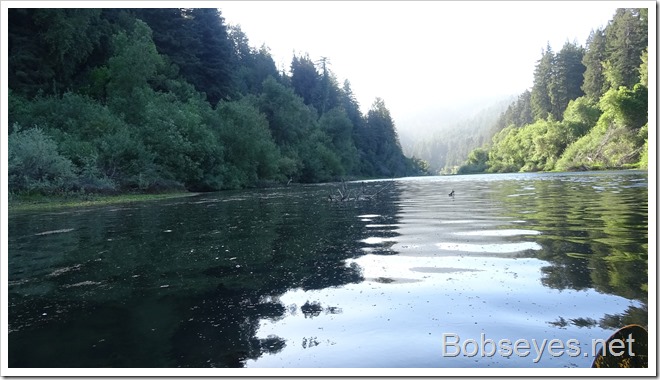 I pulled into this duck weed the river had piled up and almost got stuck in it as it was about six inches thick. 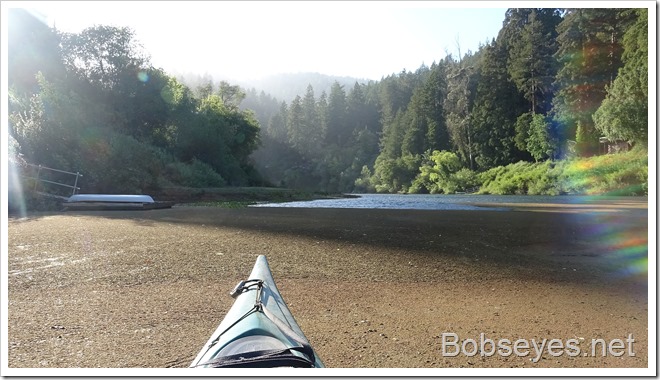 I made it down to this spot about a mile down river where I sat and enjoyed the evening for awhile. 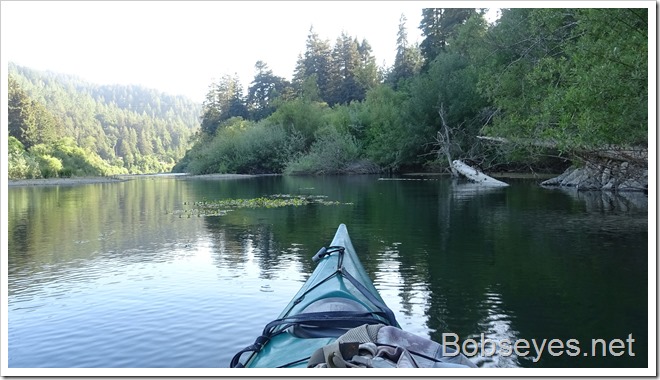 Headed back up the river at my slow pace going by that male mallard duck feeding ahead of me. 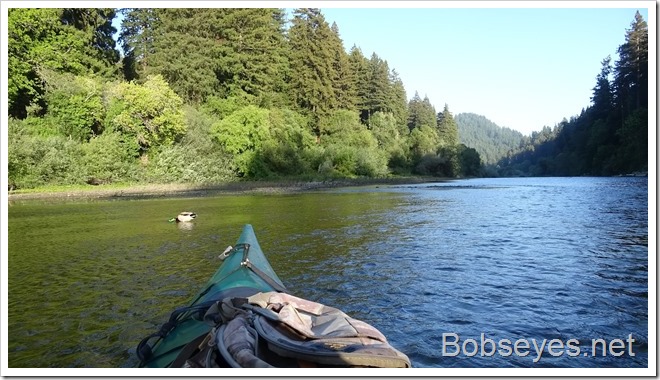 He only stopped feeding for a moment then continued as I paddled on past. 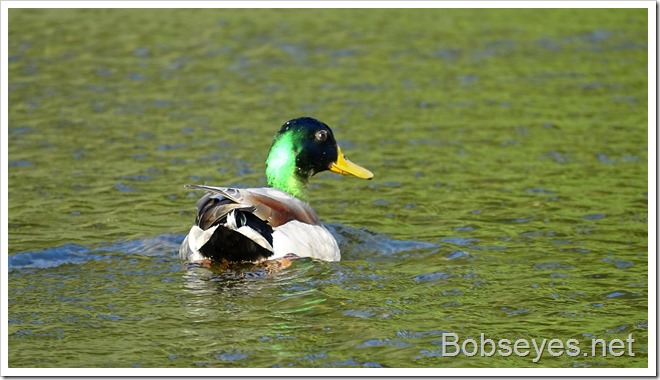 Paddling on up the river going by these ducks on the  left. 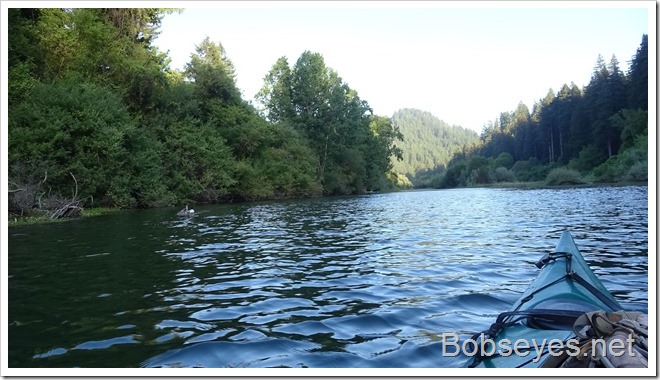 Mergansers. One male with three females. 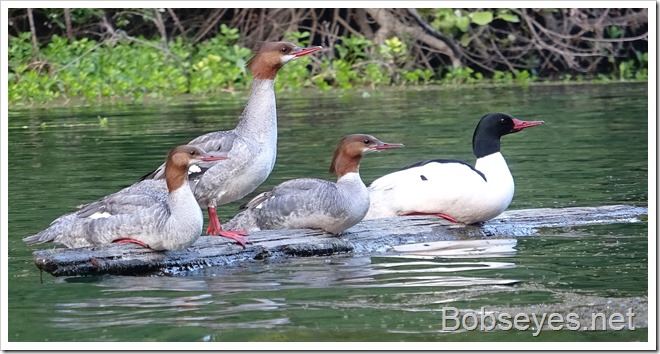 Almost back to Monte Rio here where I stopped in the green weeds up ahead for a bit. 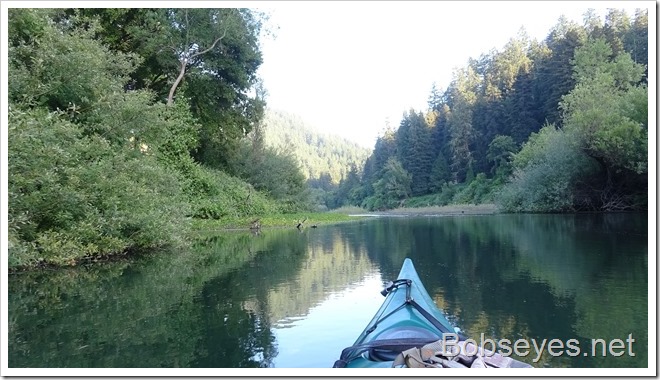 This pair of merganser ducks swam past me and I saw the night heron in the background. 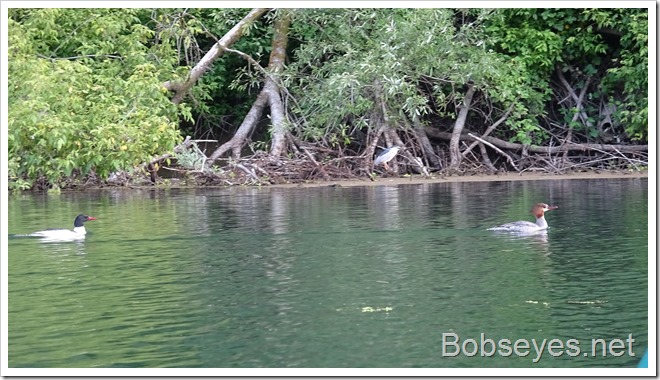 It’s likely the same night heron I went by on the way down. They fish along the shoreline in the trees and the brush. 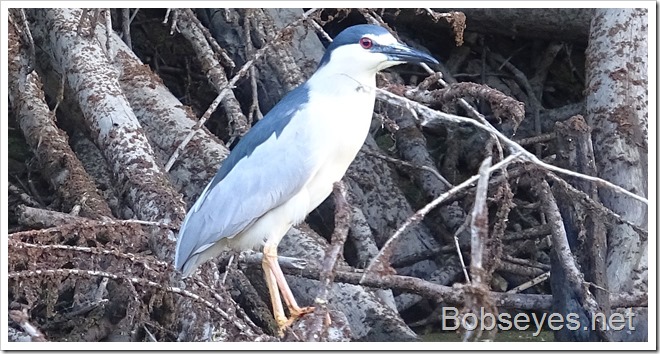 There was no one at the boat ramp when I got there so I pulled my boat out and drove down to the ocean at Jenner to have a look from the overlook.

This is looking over the river where it enters the ocean  looking south. 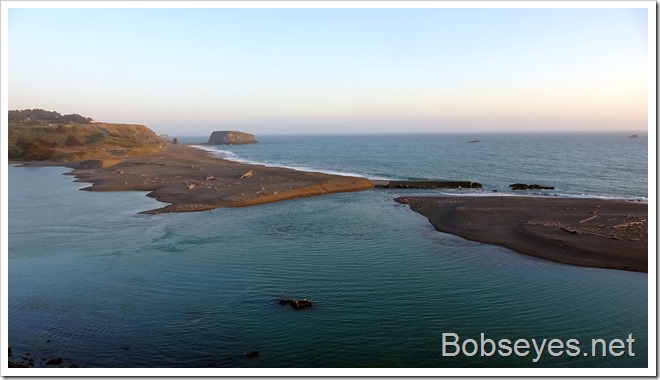 Some harbor seals and birds were resting on the sand down by the river’s open mouth. 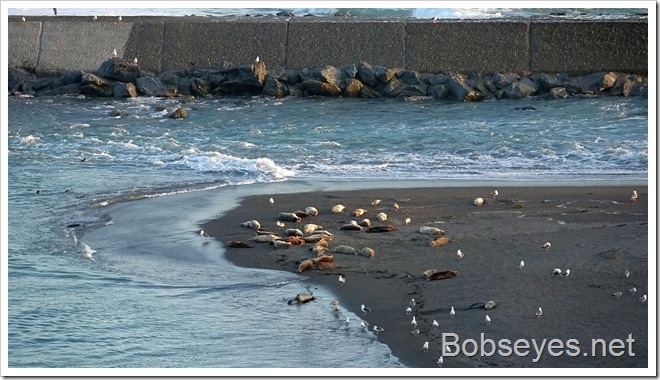 One of the reason I drove down here was to maybe see a sunset but I was just a little bit too early and besides with no clouds the sunset wouldn’t be much anyway. 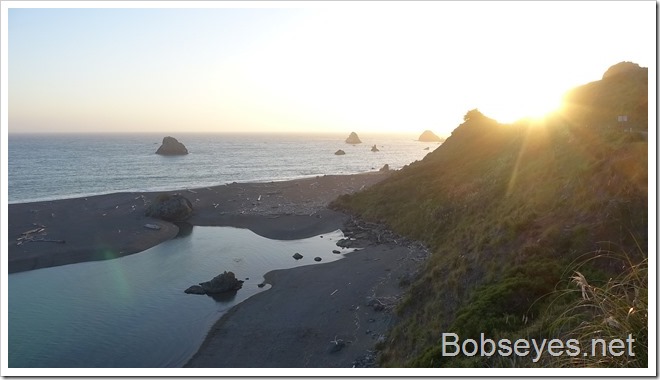 After a short stay there I headed on home for the day.