With a break in the rain today, I thought I better go down to Jenner and get a yak in , so I headed on down that way about eleven AM.

The wind was down and it was a bit overcast as I put my boat in the water at the visitor center. It was going to low tide, so there was a bit of current but not nearly as strong as I’ve been dealing with from the recent heavier rains we’ve been having.

Just an interesting note. They’ve been blaming all this rain on global warming, but I see no difference from the type of rains we had around here when I was a kid back in the fifty’s. It rained like this almost every year. I guess these guys are too young to know that? It seems they blame everything on global warming these days. Maybe we were having global warming back then, eh.

I crossed over to Penny Island heading for this great white egret I could see fishing along the shoreline on the island. It didn’t seem to be doing too good with the fishing today. 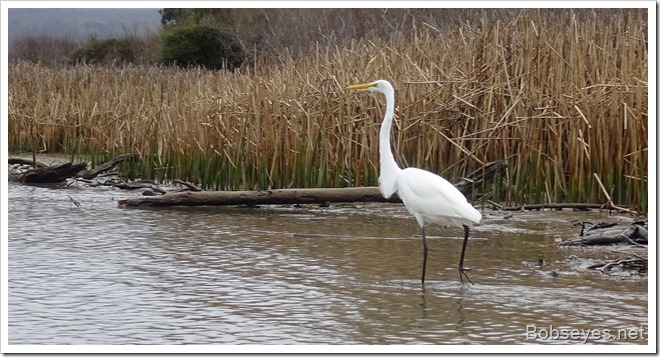 Going with the current

I was thinking of going up the river but at the last instant put my boat into a drift headed down along the side of the island, going with the current along here. 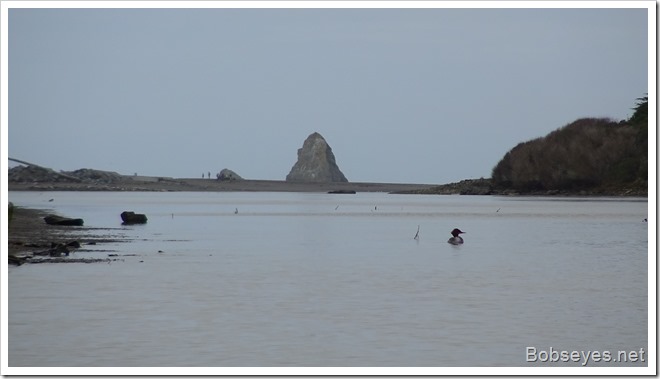 Near the bottom end of Penny Island I could see these ducks and some big type bird just behind them which  sorta looked like a bald headed eagle, but I wasn’t sure yet. 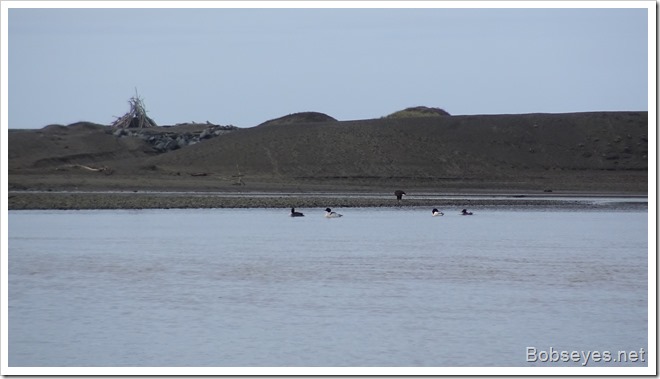 The merganser ducks were moving up the river towards me and stopped here as I drifted on by. 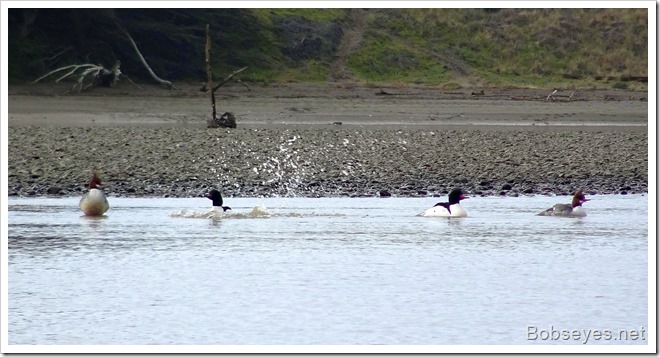 Sure enough, it was an eagle and it was eating what was left of a larger fish, maybe a steelhead. 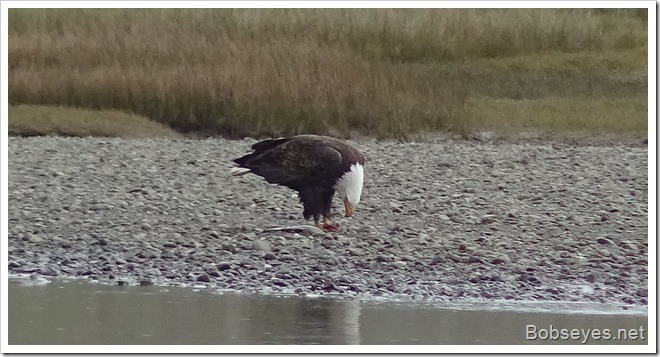 It stopped to check me out as I drifted on by but didn’t fly off. 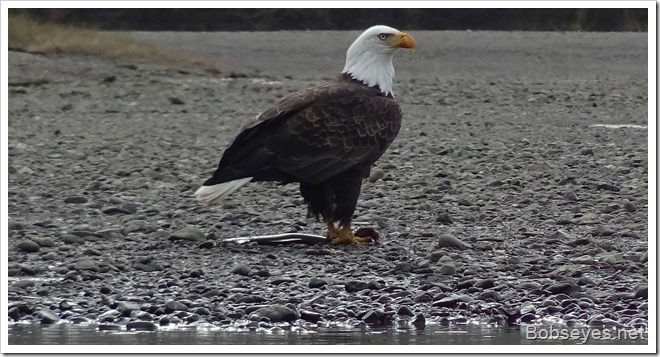 I continued on just past the lower end of the island and stopped for a spell where there was no current and just sat around in this spot, looking back up the river deciding which way to go from here. 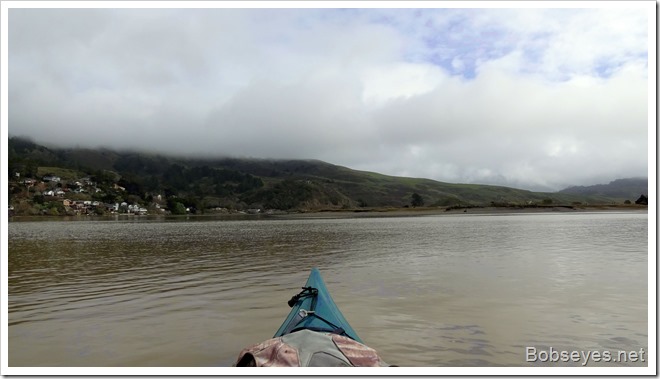 Headed up the island’s back channel

Eventually I decided to paddle on up the island’s back channel and pulled into this spot that I call the Slot and sat for a bit as it’s out of the current, looking over the island towards the town of Jenner. Big clouds where slowly moving around. 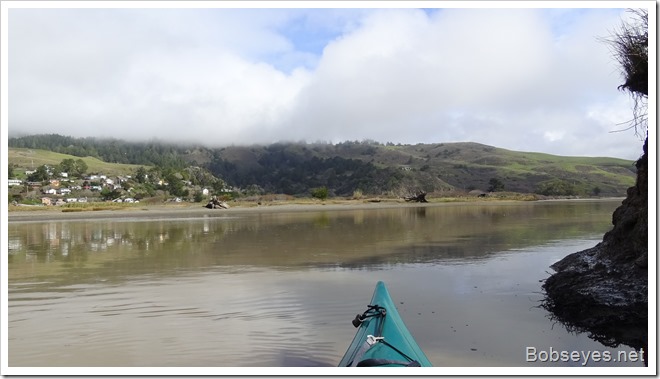 There was a bit of current going up the back channel so I had to work a bit as I went up along the south edge going past this grebe that seemed to be just floating around headed down river with the current. 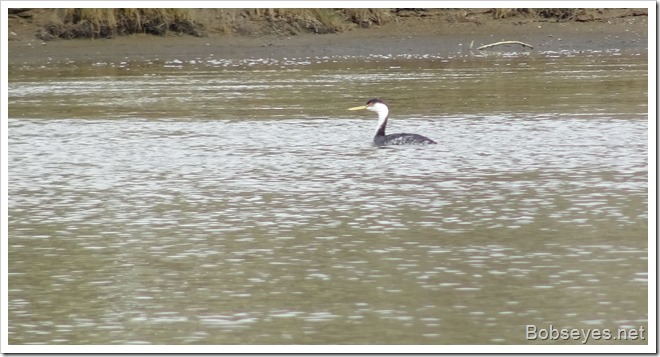 Here I’m moving up the channel staying out of the current as much as possible. 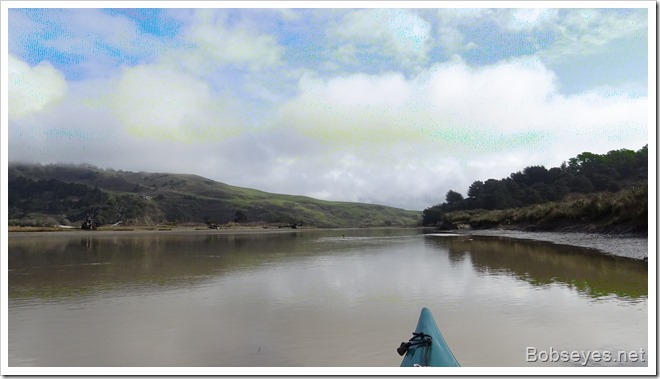 There’s always a back eddy behind things in the water

Near the top of the channel the current picked up so I had to work some and pulled in behind this big redwood stump to take a break as there is no current behind things like this in the water so it’s a good resting spot. 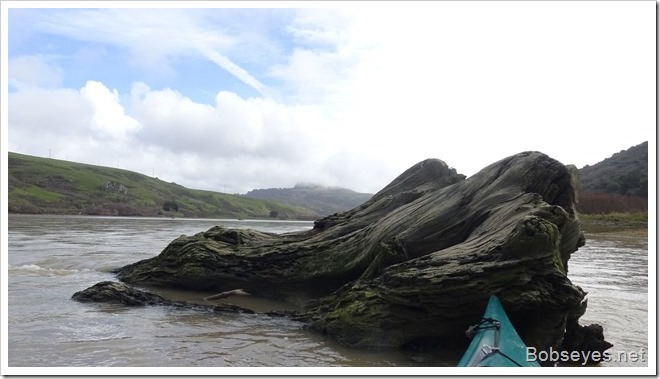 I wasn’t sure how far I wanted to paddle up the river against the current. I just kept moving up the river a little at a time and ended up at this spot which I call Eagle’s Landing where I stopped for a good break sitting in my boat and looking back down the river. 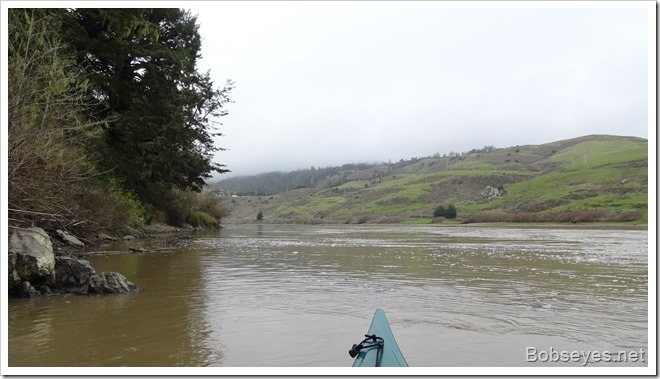 By now I’d had a good paddle and worked enough for the day, so eventually I put  my boat into the current and started a slow drift back towards the boat ramp down that away. 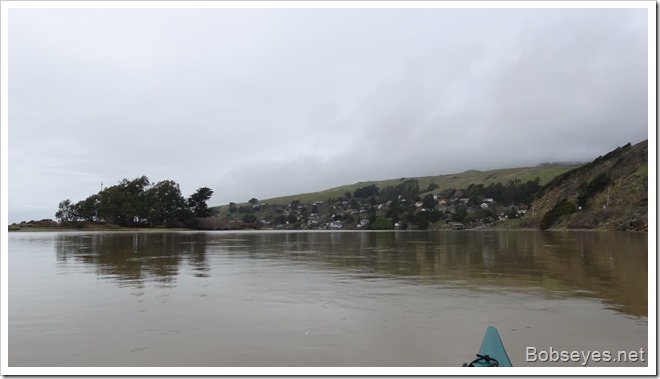 Eventually I pulled onto the boat ramp and put the yak up on the car and headed for home. I did stop and check out the boat ramp at Monte Rio. The river had come back up from yesterdays rain and it was under water about ten feet. I bet there will be a lot of gooey mud there when the water recedes as it’s been under water for quite some time now.

Knock at the door

I made it home and was taking it easy when there was a knock at the door. My brother Tom wanted some help finding out why his four wheeler wouldn’t start even though he just put a new battery in it.

So I found my volt meter and tried to measure the battery voltage, but there seemed to be something wrong with the meter. I found another one I had and we started trouble shooting the problem. The battery voltage measured ok. After checking this and that and determining the starter and the starter relay was ok, I discovered the battery wasn’t holding much of a charge and so we put the charger on the battery to give it a good charge. His new battery either needs a charge or is defective so we’ll see after it has time to charge up.

And that was pretty much my day.