With the river so high and at flood stage I decided not to go kayaking today as it wouldn’t really be much fun, so I decided to stay home and pick up some of the fruit tree brush I had pruned a few days ago.

But before I got it going there was a knock at my door. My brother Tom wanted some help finding out why his backup beeper on his e-z-go golf cart wouldn’t stop beeping.

I wasn’t booted up yet

I told him to bring it over once I woke up and got it going and we’d have a look at it.

After about an hour I was awake enough to check it out, so he brought it by and I got out  my electrical tools. 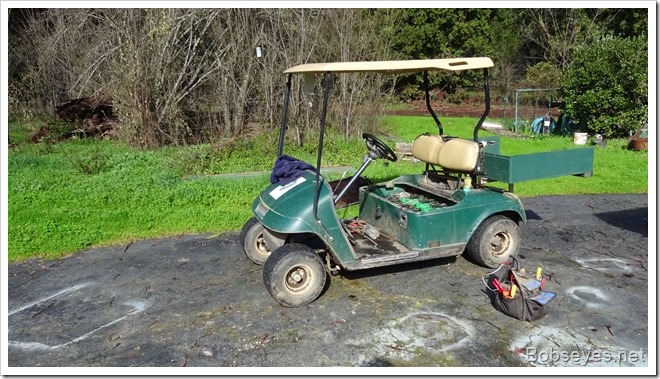 I looked around and finally located the beeping beeper. Even though it was beeping it was hard to tell just where exactly the noise was coming from as the beeps are fairly load.

Turns out it’s the doughnut looking thing in this picture and it’s mounted on the forward-reverse switch. 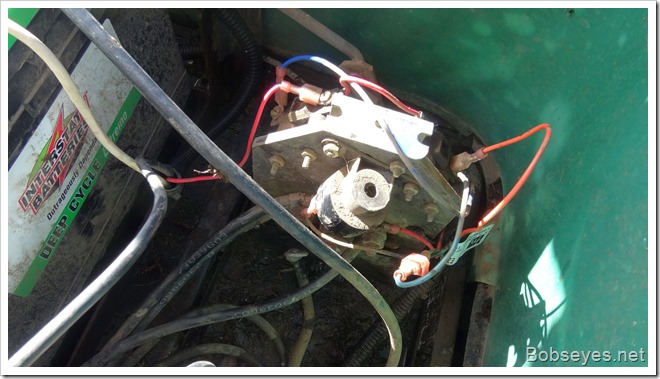 One of the main contactor studs was loose

While checking it out, I noticed one of the main lugs on the forward-reverse switch was loose which isn’t good as it would heat up and burn out eventually, so I had him remove the whole assembly hoping maybe to find out why the reverse beeper wouldn’t shut off too.

Good thing we took some pictures

It has a lot of wires on it, so we put some tape on some of them and I took photos of it all and it’s a good thing we did. The lug at the very bottom with the big black wire off is the loose one and the other side of it is a contactor. 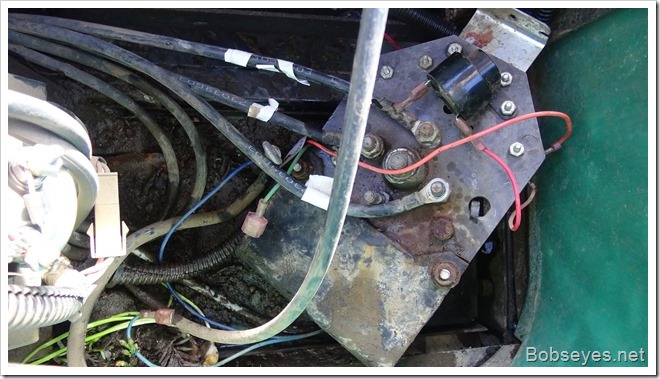 We got the part off and started disassembling it. The lug had a nut on it that was frozen so we had a hard time getting it off. The lugs were made of copper. We had to work at it and finally got it off and disassembled the whole thing and cleaned it all up using sand paper to renew the lug contacts.

This is the forward-reverse assembly once we had it out ready to disassemble. 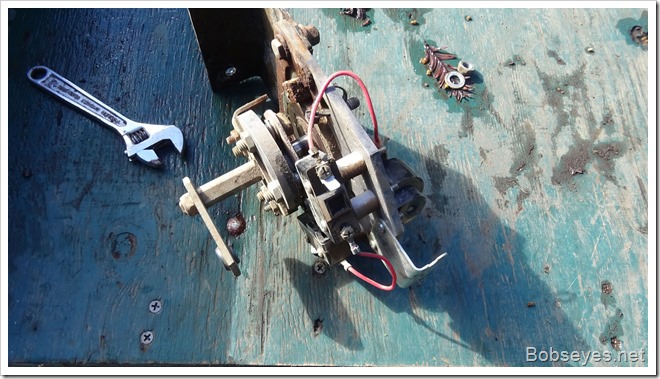 And again good thing for the pictures

When we started to reassemble this part, I realized we hadn’t marked how the assembly goes together as it has a cam on it and the lever had to be just right for it to work properly, but lucky we took photos of it all, so I went in the house and looked at the photos on the computer and we got it put back together properly. Of course we were so busy working on it, I forgot to get any photos of what we repaired.

Tom puts it back together

Tom put the part back in and we had to check the pictures we took to get all the wires back on properly as where he put them all from memory was not right. 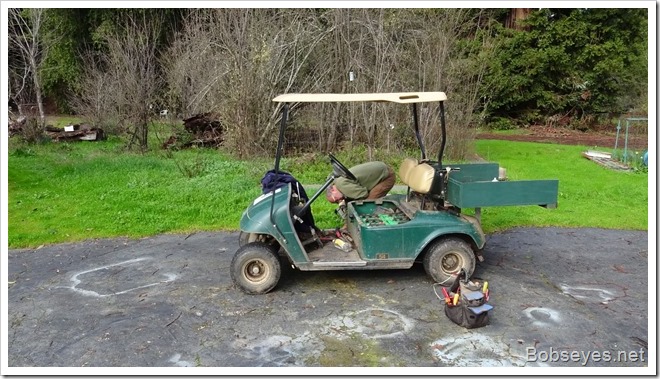 But we didn’t fix the beeper

The cart worked well, but when we hooked up the backup beeper again, it just kept beeping, but my brother didn’t want it to beep anyway, so we disconnected it and pronounced it fixed.

Picking up the brush

After a short break I started doing what I had planned to do today.

First, I’d pick up the brush and put it in small piles that I could drag over to the big brush piles I call habitat piles for the critters. I stared in the back yard first. 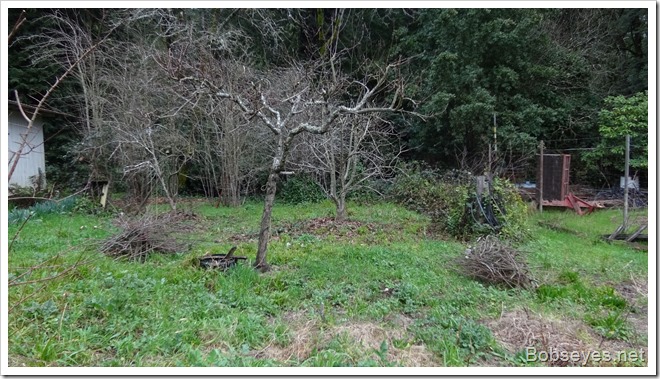 I did get some blackberry thorns in my hands a couple of times and they hurt good, so after that I was a bit more careful, but still got stuck a couple more times. Maybe I should of puts some gloves on, eh.

No permits for me

We used to burn the brush, but when they started requiring permits and inspections of what one wanted to burn I started making critter habitats instead as I especially do not like government type people on my property telling me what to do, especially city type people which most of them are.

Then I moved out to the front yard and started piling up this brush. 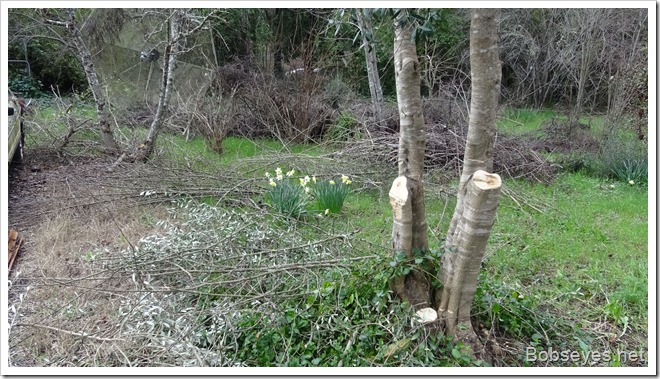 These say spring is on the way 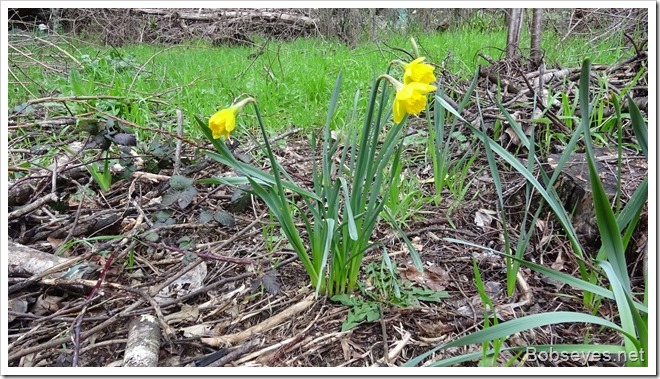 Big piles for birds and critters

I dragged the small piles to this big habitat pile and piled them on top as best I could. 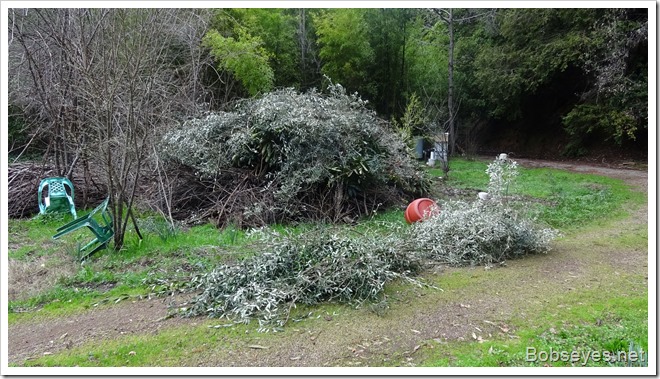 After some time, the big pile shrinks down so I can pile on more the next year.

My back was starting to hurt some and luckily it started to sprinkle which was my cue to quit doing that for the day.

So I went in the house for a break while waiting for the rain showers to pass which they did in a short time.

I had one more thing to do today even though my back was hurting a bit.

I wanted to move some rock to the place the fuel truck broke through the other day, so I rounded up a shovel and loaded the wheelbarrow up and dumped it in this spot and spread it out. 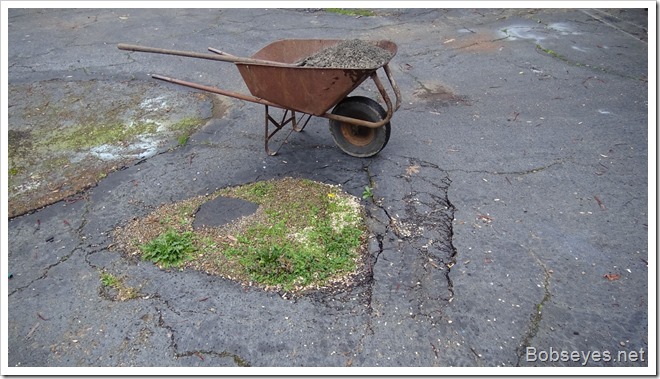 By now it was almost dark so I went in the house for another break and it was dark after that.

Figuring out why the beeper kept beeping

I was still thinking about why his cart beeper wouldn’t shut off, so I studied the wire schematic for it and after some thought realized the problem has to be the micro switch that activated it is stuck on.

That’s the black thing there with the spade and red wires on it. I’m pretty sure it’s stuck on and might not be a problem, but one of the wires goes to the computer controller so maybe we should fix it. 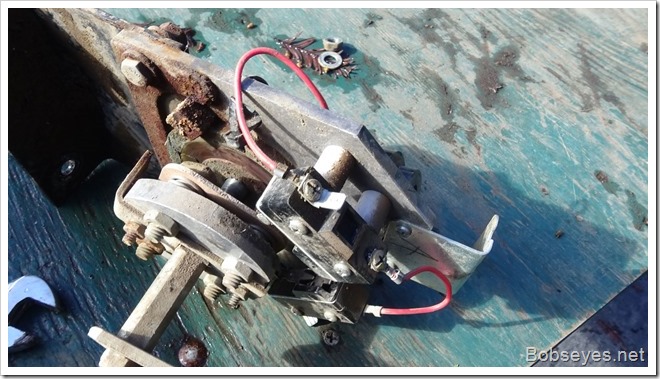