Drizzled Out, Sleepy and Fixing the Golf Cart Again

Not windy but drizzly

The weather guys said it was going to be a bit windy down at Jenner today, but not too bad, so I headed down that was.

About half way there I drove into a drizzle and about that same time I  was tired out so pulled over by the road and had a break. With the corn allergy itching sleeping isn’t easy, so I haven’t been sleeping well, so I do what ever has to be done.

Overlook at the mouth

After a short break I headed on down to Jenner where wind wasn’t the problem but it was still drizzling just enough to get you wet if you stay out in it, so I drove on down to the river’s mouth overlook instead of putting my boat in the water.

The drizzle made it look like this from the overlook,looking out towards the ocean. 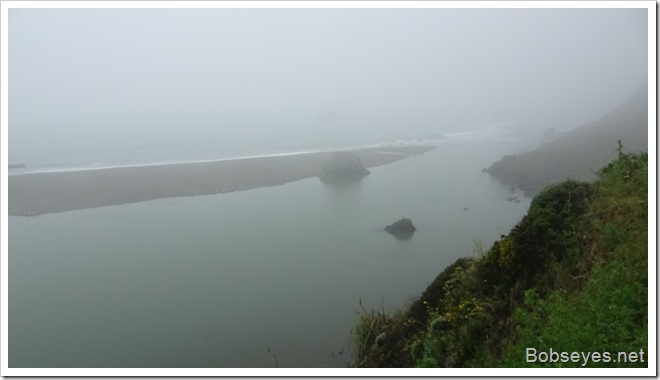 So much drizzle it wasn’t good for pictures, except to show the mist. Some seals and birds down there on the sand. 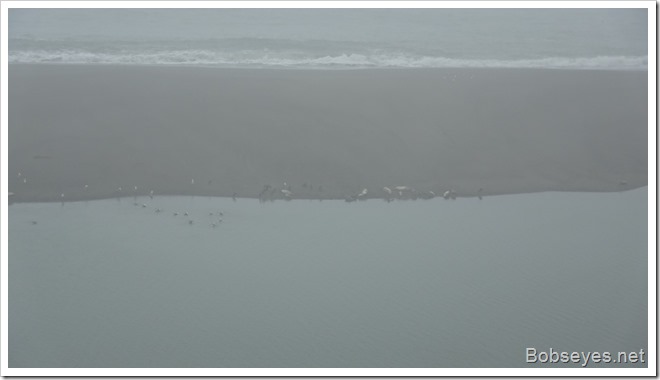 Always nice to talk with Andy

I saw a county car parked next to me and as I was walking by I noticed it was Andy a seal type biologist, so I shot the bull with her for a bit. I asked her if she thought the seal pups were born late this year or was it just me. She said it was me as her records show the seals start to pup the last week in March.

Here’s Andy looking through her scope and counting the seals down below. 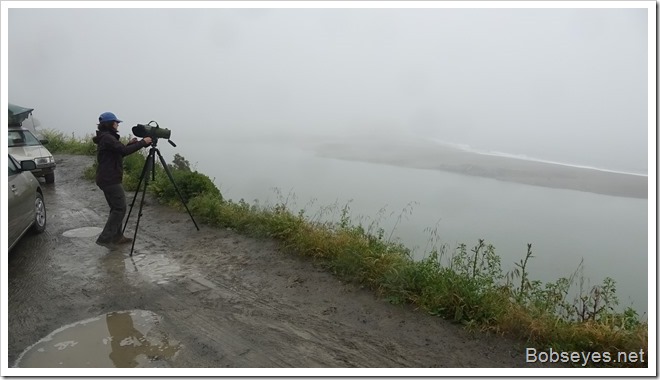 No yakking for me today

The mist cleared slightly just before I left, but not good enough to entice me to kayak. 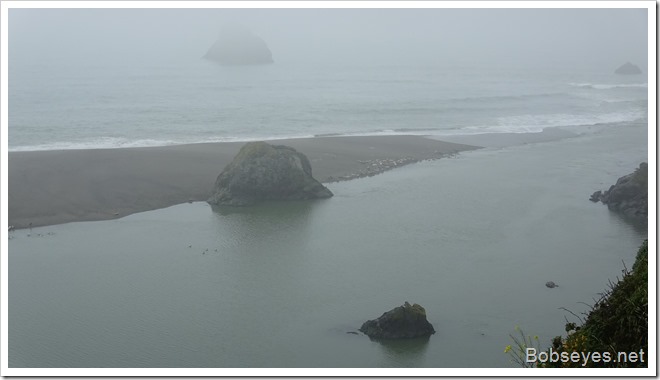 So the weather guys were wrong again. It wasn’t windy, just drizzly.

So I drove on home feeling like i needed a good sleep.

I napped a bit when I got home and then went out in the yard to putter around a bit.

When I walked by the roses I noticed the big pink ones had finally opened up. 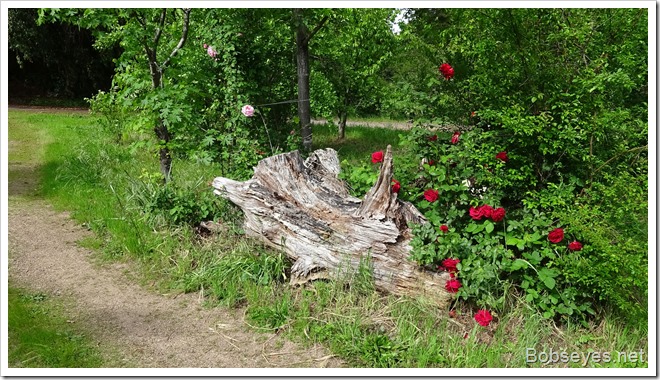 A bit pink climbing rose, one of the first to open up this year. 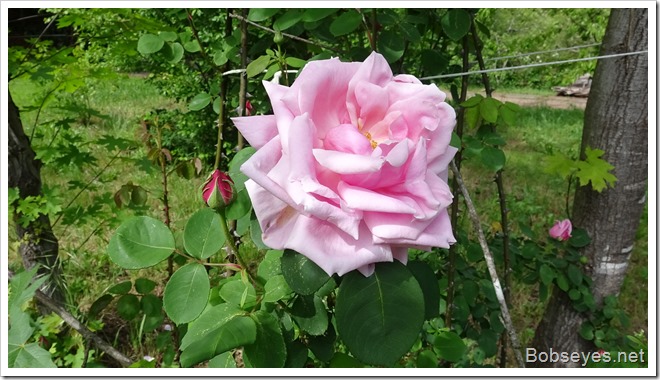 The red roses are looking good too. 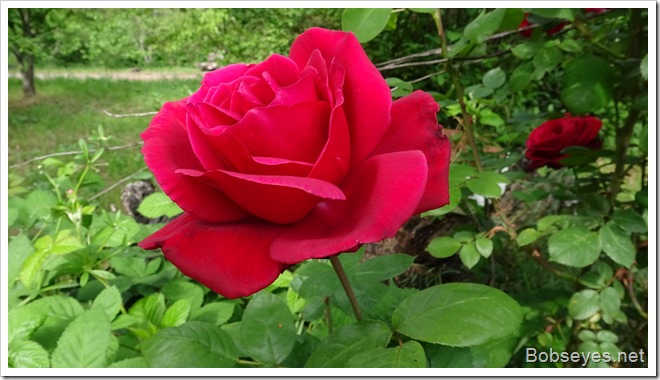 My brother  told me the other day one of his golf carts needed fixing so when I saw him pull into his yard I went over to tell him he better get it to my yard if he wanted me to work on it, before I left for a trip soon.

He found a chain and pulled it into my yard with his good cart. 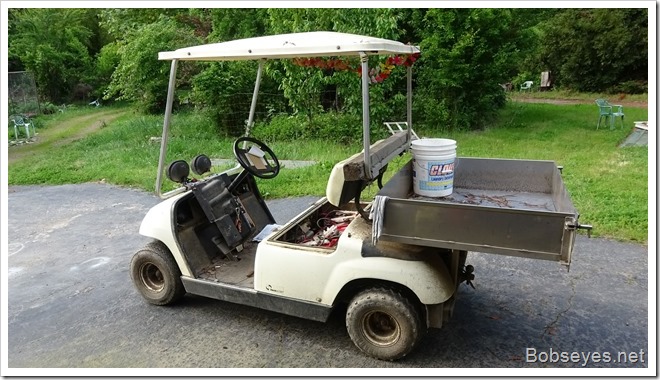 I got my tools out and started taking measurements to see what was wrong. I have wiring diagrams from working on this before so I had a chance to figure it all out.

I pulled the main computer socket apart and discovered a wire that had corroded where it connected to one of the pins in the socket. 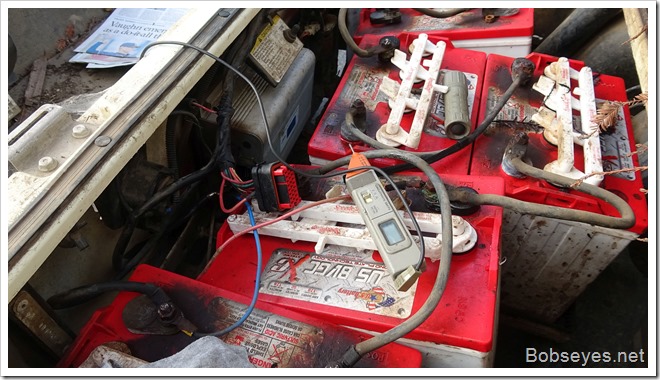 It corroded so much the wire was gone so there was no power getting through it. Turns out I had this same problem before and fixed it the best I could but used the old pin.

The red wire there corroded and broke off at the socket pin. 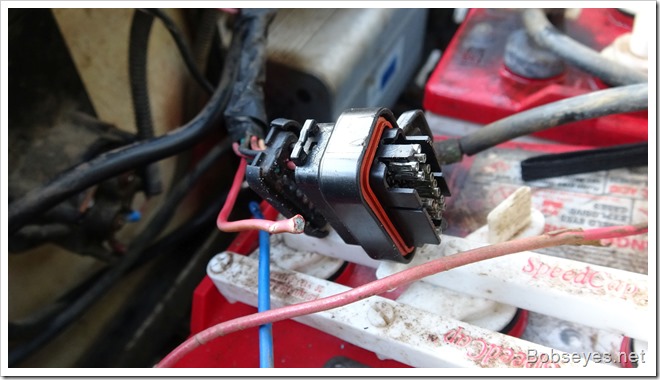 Here’s the pin that the wire corroded off. 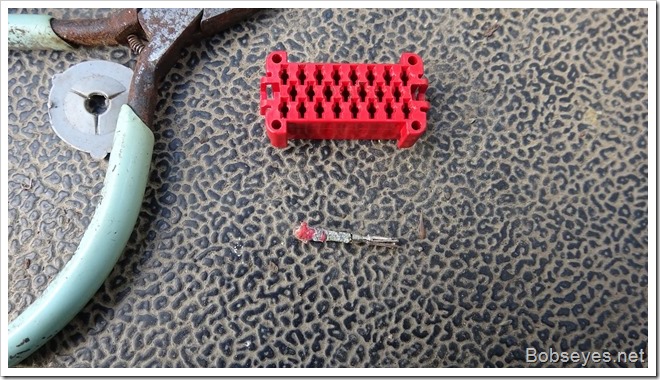 I found a little bag for the pin and took it over to my brother so he can get a new one as this time I want to fix it right and replace the bad pin with a new one.

There wasn’t too much left in the day after that and I was still tired out, so I went in for another nap.