I decided to remake the box trap trigger I made yesterday as I thought I could make one a little better then the first one. The new one is on the left and the little notches in it are the improvement as the notches are smaller and should be easier to set off by a critter and easier to set the trap. 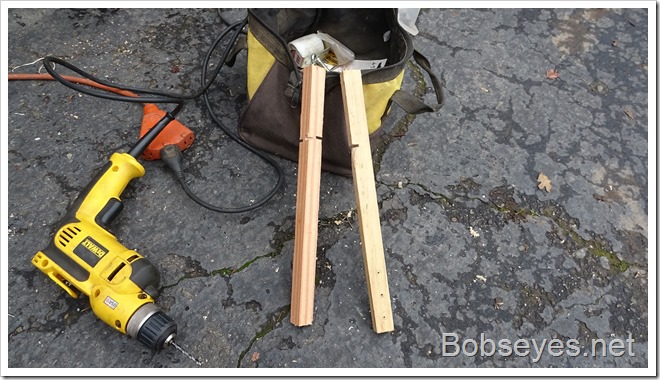 The cat came by to check things out as I was installing the new trigger piece. She was smart enough not to go into the trap. 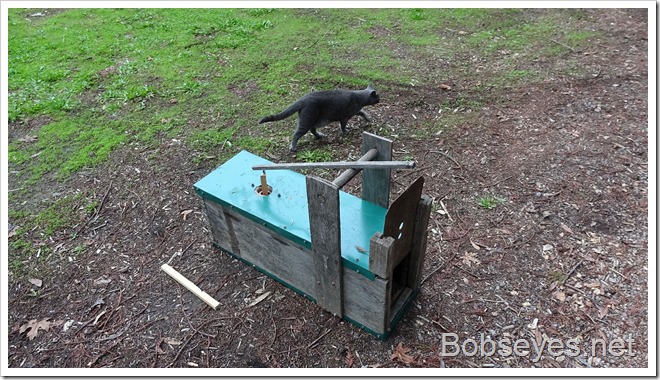 This is the new trigger stick that a critter just has to hit slightly to set off the trap door to close shut. 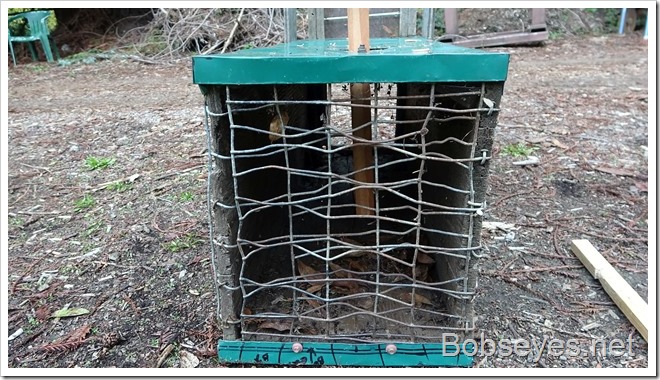 I left the trap  here for Tom to pick up on his way by to take care of his chickens. 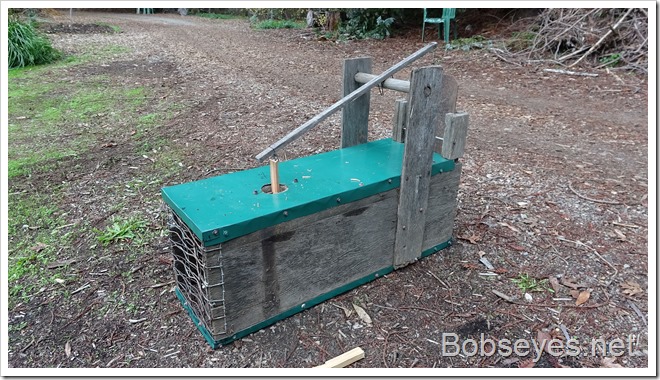 Next I loaded five gallons of fuel for the dozer and took it over to  put it in the machine. 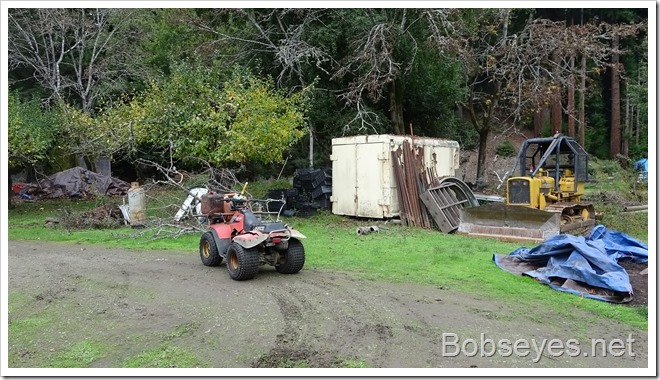 The full container on the left was more then my sore right  arm could left so I had to transfer some to another container so I could get the fuel into the dozer. That worked. One has to do thinks differently sometimes when one gets older if one wants to get stuff done that used to be simple when younger. 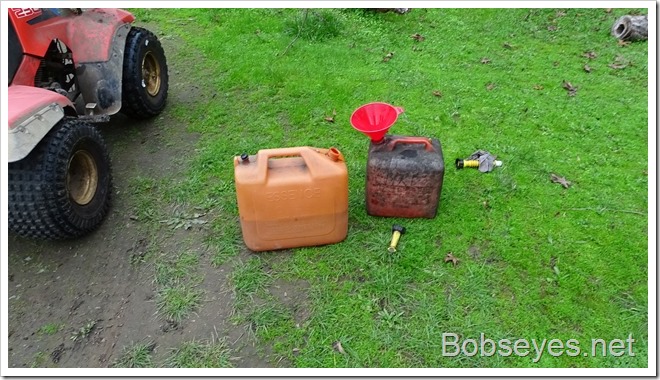 After that was done I rode up to  this washout area and  put a few more rocks in the crossing. This one will take quite a few rocks before I’m done with it. 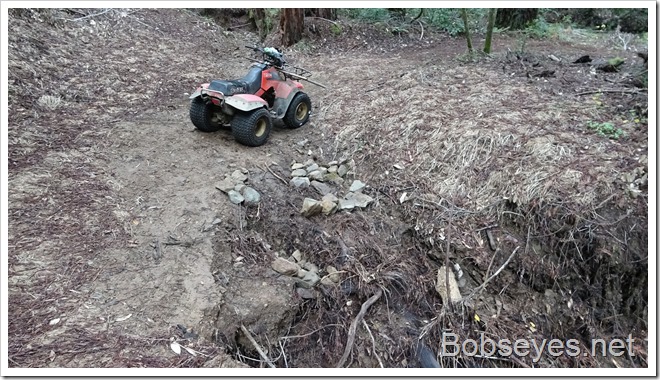 And then I continued on up the trail to this spot where I parked and am now walking up the trail a short distance. 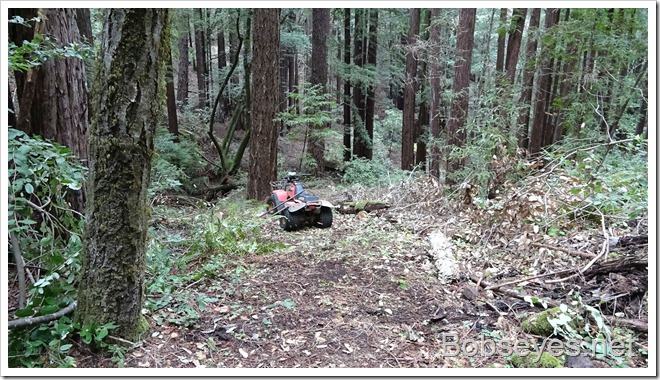 Today that green fern covered rock has to get removed as the old trail here is too narrow and needs to be widened out. I hope that rock will break up so I can move it. The big steel wrecker bar was brought up to do the job. I should of brought up a sledge hammer too as it would have made breaking up the big rock easier. 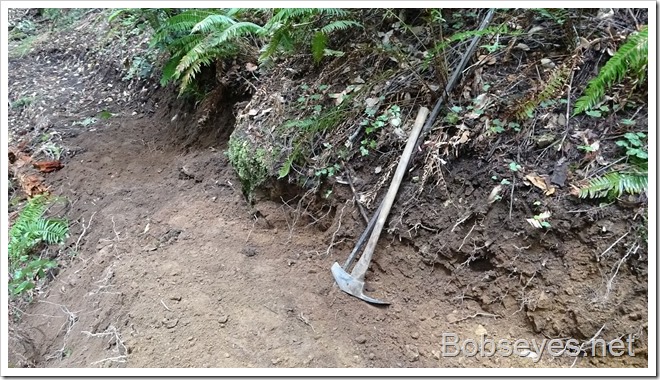 That rock turned out to be part of the whole mountain so I couldn’t move it, but had to break up into smaller pieces.

I worked on breaking up the rock and building that rock retaining wall until it got too dark to do any more. 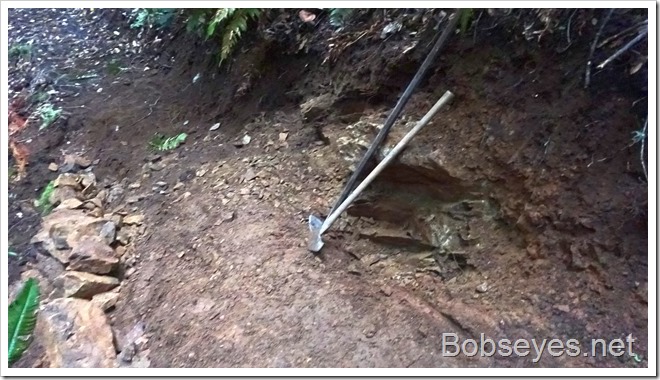 Got dark on me

The dark had creped up on me so I  had to ride on home in the dark. 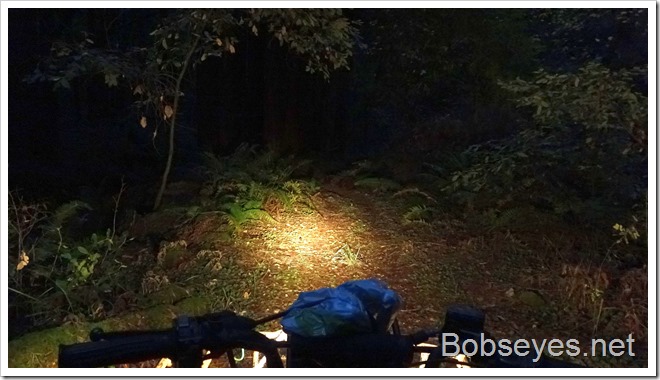 When I got home I went to close up the chickens for the night and found a young rooster dead by the gate to the pen.

It’s not the fox

Tom came by to tell me a hawk had killed the young rooster not the fox.

I buried the dead rooster just like Tom buried his 50 dead birds He used his tractor though. I only needed a shovel.

Nice day in the forest, bad day for the rooster.

(Visited 105 times, 1 visits today)
This entry was posted in Uncategorized and tagged box trap trigger, trail work in the forest. Bookmark the permalink.

1 Response to Dozer Fuel, Trail Work and a Hawk Get’s a Young Rooster