Dozer Battery, a Ride Up the Hill and the Walnut Tree Comes Down

I was thinking of going kayaking today but with some more rain coming in soon I thought it’d be a good idea to ride up the hill and start the bulldozer to charge up it’s battery as it’s been quite some time since I last did it, maybe too long.

I like to take some fuel up there when I do this so I filled up a container with fuel and loaded it on my old quad to take up the hill and put in the dozer. 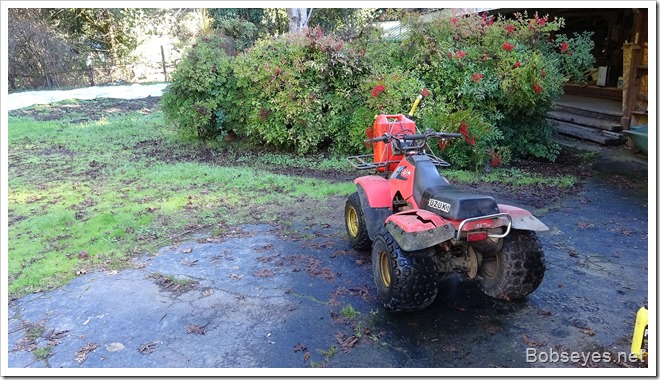 Gloves would have been nice

The sun was out but it was cool on the ride up the hill to the dozer. I was thinking I should of put on some gloves, but oh well, tough it out.

Here’s where the dozer has been parked up on the hill. I put the fuel in the dozer and checked the transmission oil which was low. 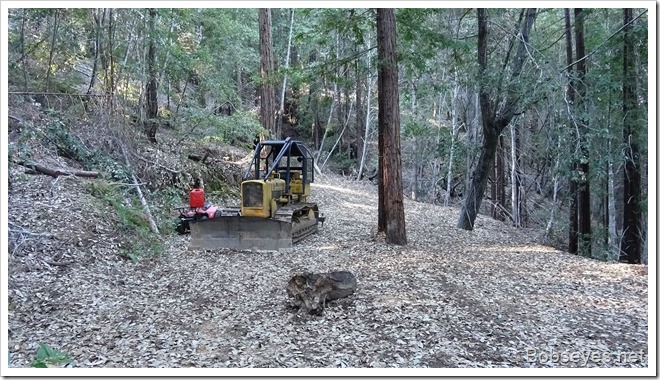 Not going to start

I tried to start it and it would almost turn over but with the cold it would not so I left the battery too long between charges.

The battery is stuck

I’d bought up a couple tools to disconnect the battery just in case so I started to try and unhook it but one of the clamps was stuck on and it wouldn’t come off and I needed a hammer that I didn’t have. I hunted around for a hammer and found a small piece of wood that I could hit the screw driver with and it finally came off. It was sure stuck on there. 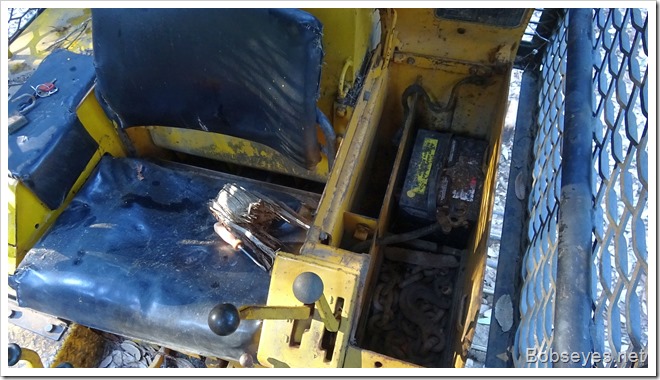 I left the battery and the fuel can there and went off for a ride headed for the top of the hill where I could see the town of Guerneville down in those trees. 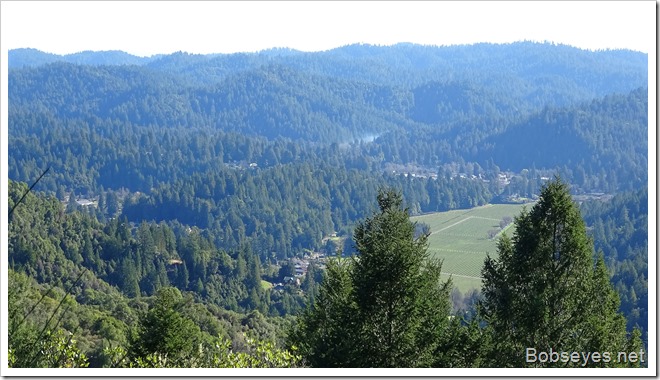 After that I took this road just to ride around a bit. 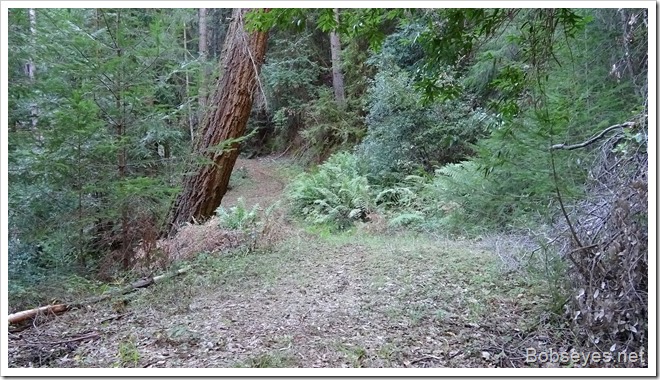 I ran into a downed tree here and there and if I could I moved them off the road. 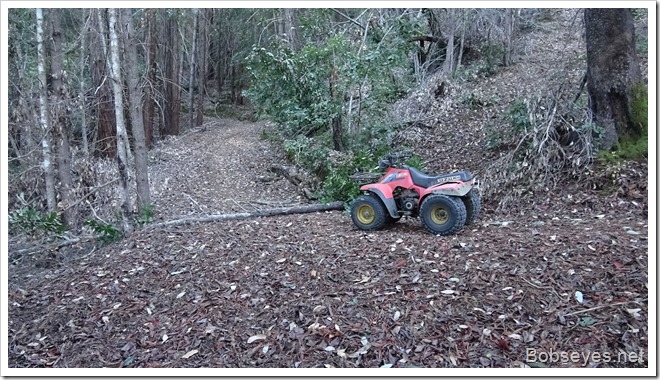 There’s always lots of tree stuff and rocks on the roads. Here I stopped to throw this stuff off the road. 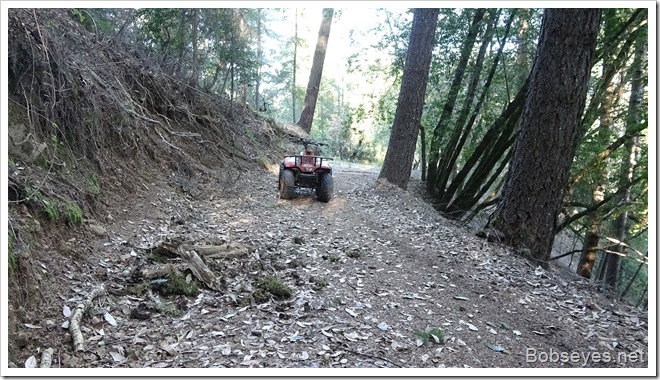 This is always a nice drive through this road. 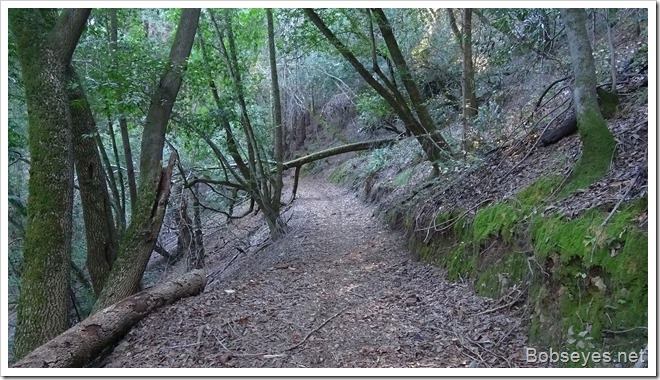 I made it back to the dozer and was able to secure the battery to the quad bike and also the fuel can and continued on down the hill.

It’s always good to stop at our water tanks to make sure they are full and everything is working as it should. These tanks collect spring water for our houses.

Down with the black walnut tree

Back home after a bit of a break I got my chainsaw out and sharpened up the chain as I wanted to cut this black walnut tree down as it blocks the sun and I don’t use the nuts. The tree I’m going to cut down is by the red chainsaw. 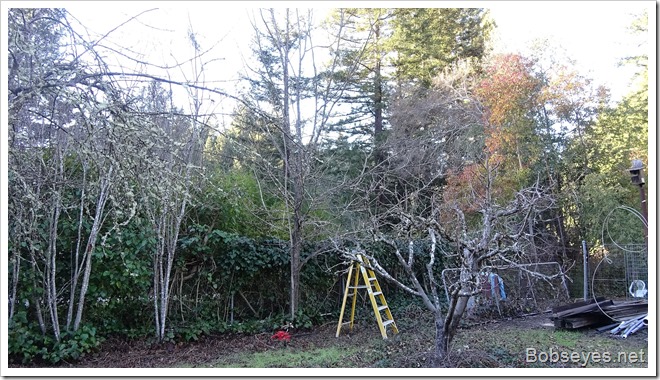 I remembered to put the dozer battery on the charger to charge.

I installed a rope to keep the tree from falling the wrong way which was out on the public road which wouldn’t be good.

I cut it down taking out a bit of one of my apple trees. 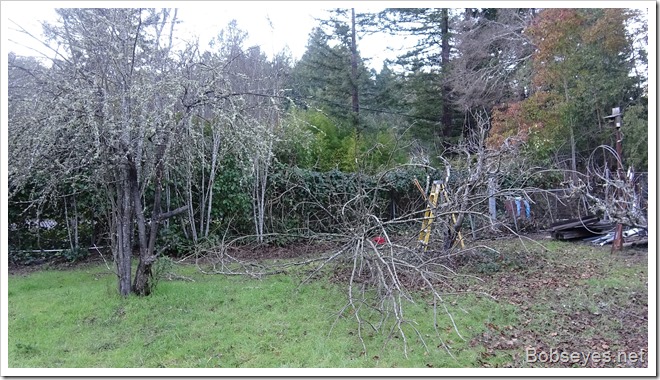 While I was cutting the stump off at the ground after falling the tree I hit a rock and it dulled the chain real bad so that was that until I sharpened the chain again but at least I got the tree down.

I would have sharpened the chain but the day was almost over and I didn’t feel like it.

A short time later I let the chickens out in the yard to graze.

Here they are in the raspberry patch. My new gate isn’t working to keep them out, maybe I need to add some wire. 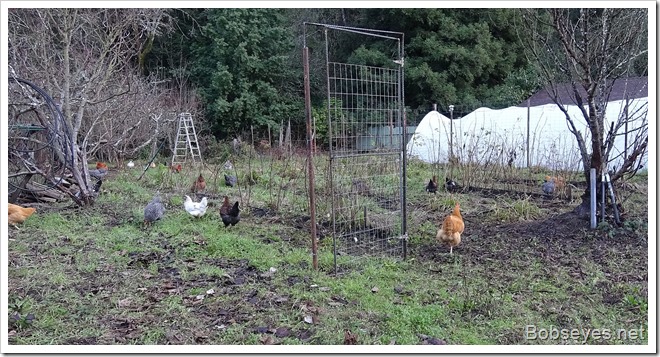