Yesterday while taking the bulldozer up the hill I was supposed to pull a big tree down off the hill my brother cut down which got stuck in another tree,  but I forgot.

So today I was going to move that tree for him. It was supposed to rain in the PM which I though was evening but I think they meant after lunch time. Anyway I didn’t prepare for rain as I thought I’d be ok.

I put some fuel in a container and drove the quad runner up the hill where the dozer was parked and put the fuel in the dozer’s tank. 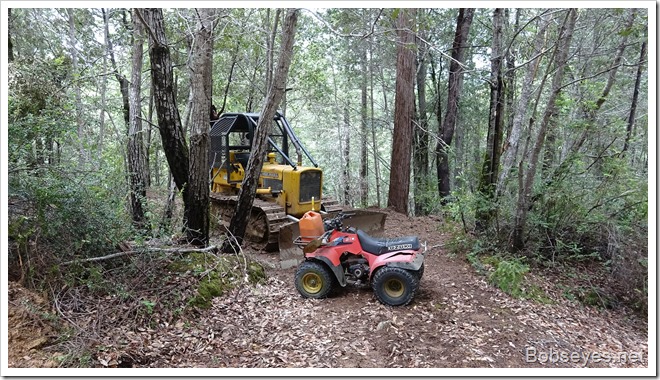 It was only a couple hundred yards to the tree I needed to tug on but it was down a steep hill. Last nights rain made the trip down the wet road a bit more exciting than usual. Noting like skiing your dozer down a steep  muddy hill. 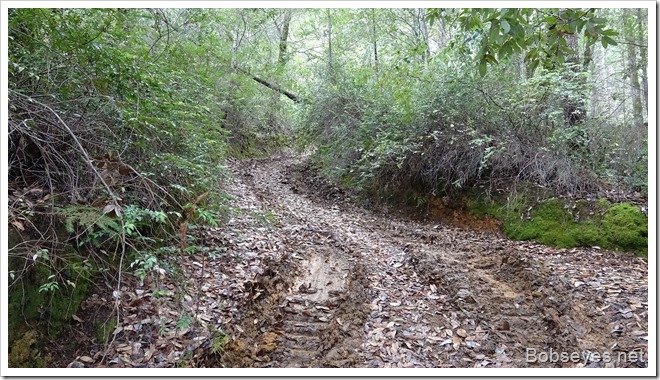 The tree is hard to see but it is in front of the dozer and now on the road ready for my brother to cut it up when he’s able. I think that might be the tree that the butt hit him on his leg when he cut it down. He says he has to wait to cut it up as he tore a tendon in his knee and has to take it easy. Anyway it’s there waiting for him. 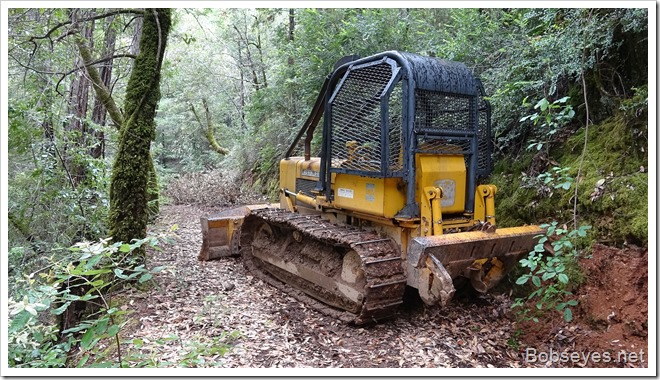 Then I tried to get the chain hook off the dozer’s blade where I hooked it on but it was stuck. I tugged it a bit but decided that was only going to wear me out. I decided to try driving the dozer forward to see if the hook would pull off as the other end was still attached to the tree.  That worked. 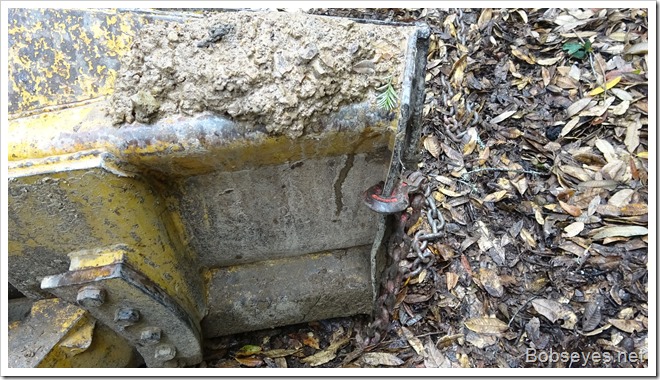 I decided not to try and get back up that slippery road and parked the dozer here and walked back up the hill. 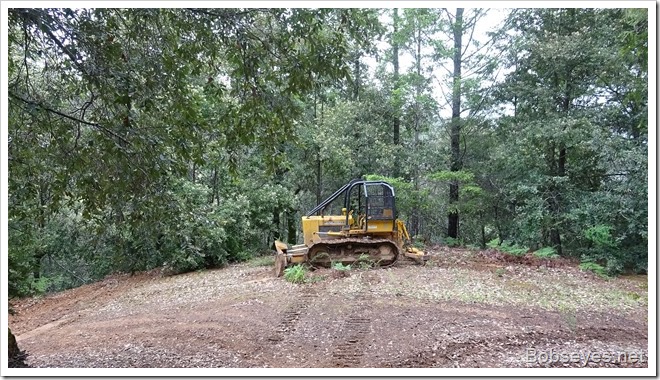 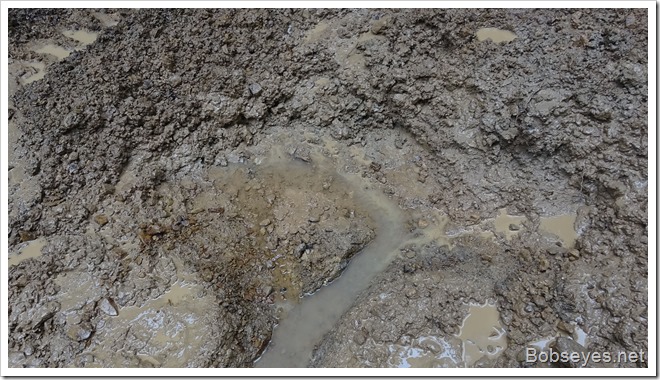 I made a small dam and put a pipe in to measure how much water is coming out of the ground using a gallon paint can and a watch to measure how long the can takes to fill.

I was impressed with five gallons a minute. Let’s see, 5 gallons per minute times 60 minutes an hour, that’s 300 gallons an hour, times 24 hours, that’s 7,200 gallons a day. It’s a bit dirty because of my digging but will clear up nicely and is a very good tasting spring. 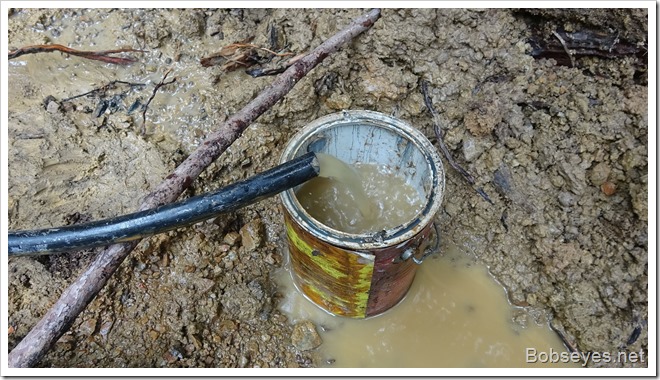 I will need to put a good tap in that spring soon.

Once  home I had to wash off my muddy shoes. Sticky stuff that mud and now I had wet shoes. 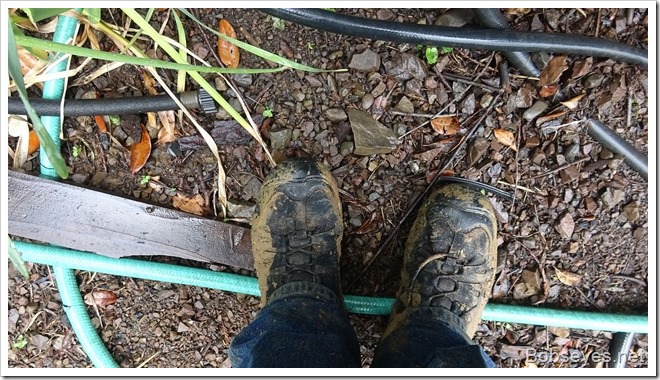 After a good break I went back outside where it was still showering and did a few things.

This box needed it’s wooden side glued up as I want to use it for the new peeps that should be arriving in a few days as a brooder to keep them warm. 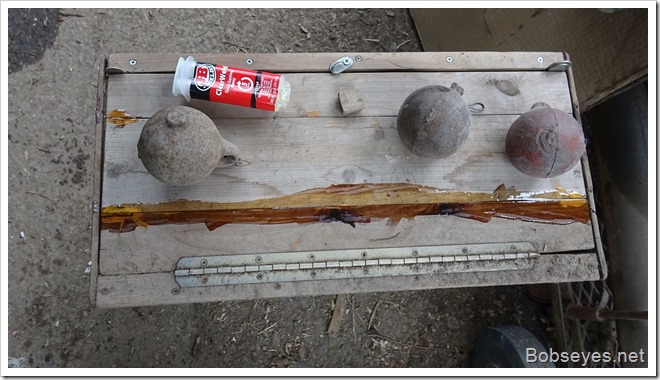 While the glue was setting I fixed a water leak in this chicken;s waterer. I just needed to reseat and tighten up the hose clamp and that got it. 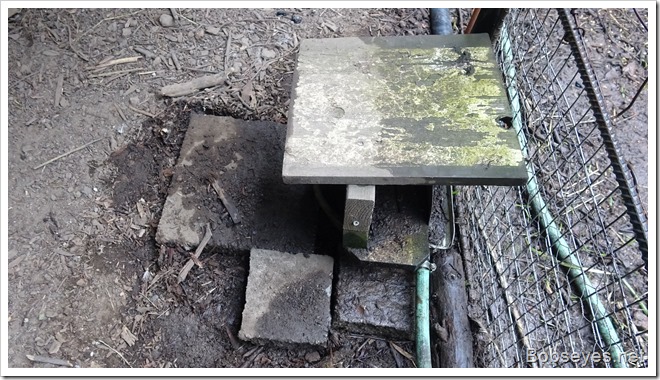 By then the day was getting late and the momma hen and her chicks had gone into their box for the day. 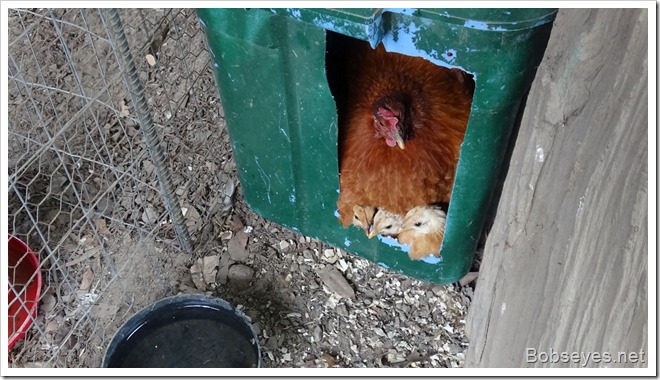 A reader asked in comments

I am just curious why you won’t allow the hens to sit and hatch their eggs but insist on hatching by mechanical means.

Hi, It’s mostly a matter of logistics. Last year I let the hens do it and they’d sit on a dozen eggs and hatch out four or five of them and then I’d have to take care of their needs all summer long. Some hens would be nesting throughout the summer. I did learn a lot about them though. The result after doing that and some hawks getting some of them meant I really didn’t’ hatch out enough chickens for eggs and meat as with my corn allergy it takes a lot to feed me throughout the year. So this year I decided I’d try an egg incubator and get it all done and over with and hopefully do better than last year. My plan was to hatch them out early so I can have some meat birds by summer;s end instead of by Christmas. I got the incubator a little late but that’s my plan. Also when a hen is on a nest and nesting one doesn’t get any eggs from her so that puts a dent in things too.

More to the story

There’s more to that story too. When I first got the chickens I thought I’d only need to keep around 15 or so birds but I was wrong about that. I had about 25 hens last year going into winter and when they go into their molt around September to December they don’t lay many eggs. I’d get about 1 to 5 eggs a day for the period. If I butchered any birds I figure I’d get even less eggs so no meat until the summers young roosters started to crow, all night around Christmas. When the young roosters mature they start to crow, all night and they work off each other so they  make a lot of noise which is an indication it’s time to butcher them which I did around the new year, but I was without meat until that time so I needed to do something different this year as I like to stay alive which means I need to eat.

So that’s why I decided to use an  incubator. I can get my birds hatched out earlier so I can have some meat much earlier in the year.

I also realized from last years experience I’d need closer to 50 birds a year to make this all work out. I have 56 eggs in the incubator but usually not all will hatch from what I’ve read.

Nice day puttering up in the hills and in my yard.

1 Response to Dozer and Spring Work, Rain and Fixing Stuff