Doing Some Repairs On the Forest Roads With the Dozer

I’ve been prepping the old bulldozer to get it ready for today. I need to go up in the hills and make sure the rain water will drain in the right directions not to cause any washouts like the one I also need to go up and fix today. 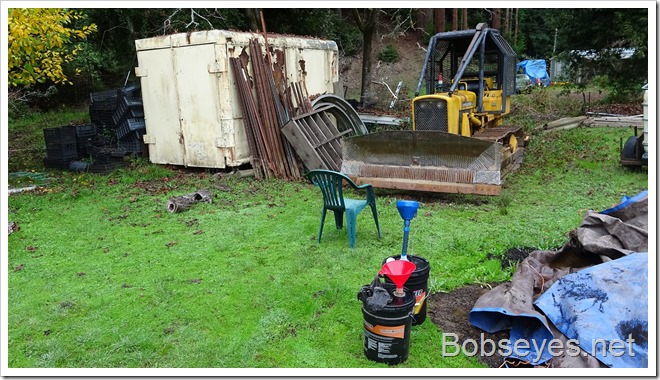 I got it filled up to where I thought it was full reading on the dip stick but I was wrong on that one which I found out a bit later.

Anyway I took off headed up to the hills by this road. 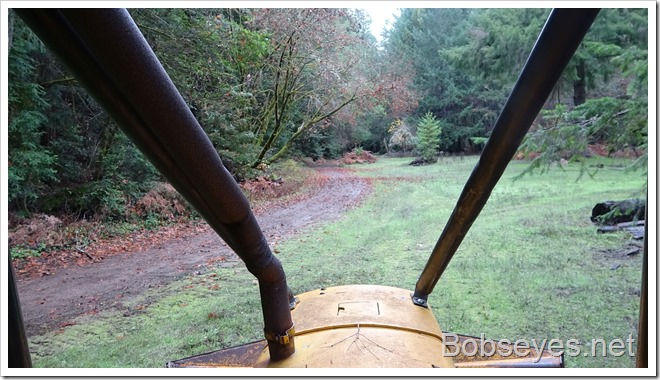 I did some light blade work making sure the water could get off the road here and there instead of running down the road and causing damage. It didn’t take much as water was mostly headed off the road there anyway.

One of my drainage ditches. 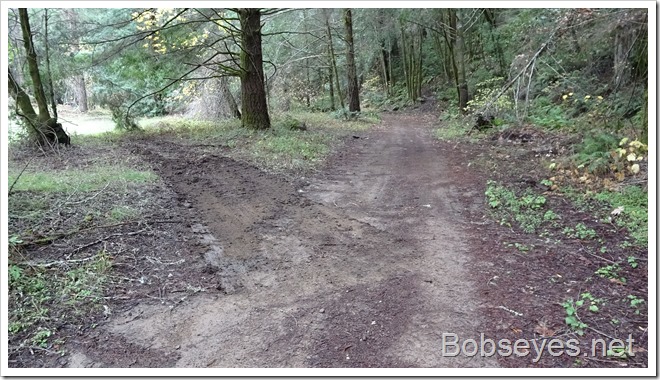 Most of the work I needed to do was up near the ridge top where the fire crews  had been working on the recent forest fire.

I went past our water tanks on the way up the hill. 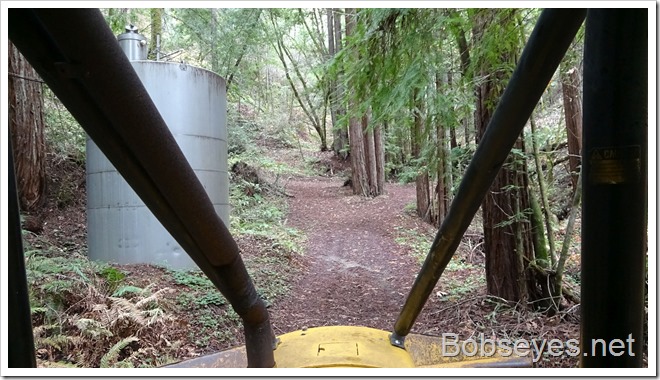 I fixed the road in a couple places that had real small dirt slides like this one. 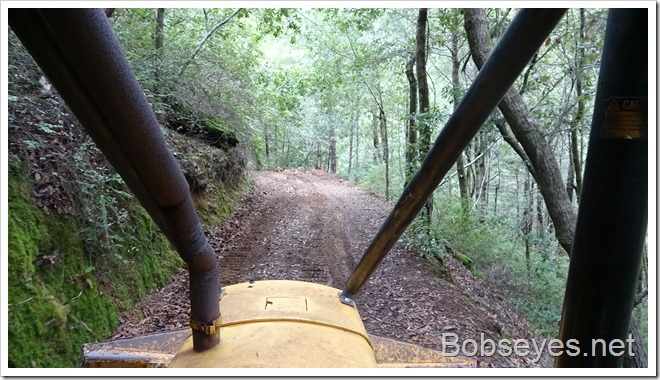 Well as I was going up the hill I noticed the transmission was going into neutral now and then but it took me a bit to figure out why.

I was over working on a place that my brother wanted me to fix on mushroom road when I decided the dozer needed more transmission oil as I must of misread the dip stick or something.

Working it like this was just too dangerous on the steep parts I need to repair so I aborted  that job after I started it and drove the dozer back down the hill so I could get some more oil for it. At least I was  hoping that was the problem because working on dozers isn’t much fun.

So I headed back down the hill going through this spot on the way. 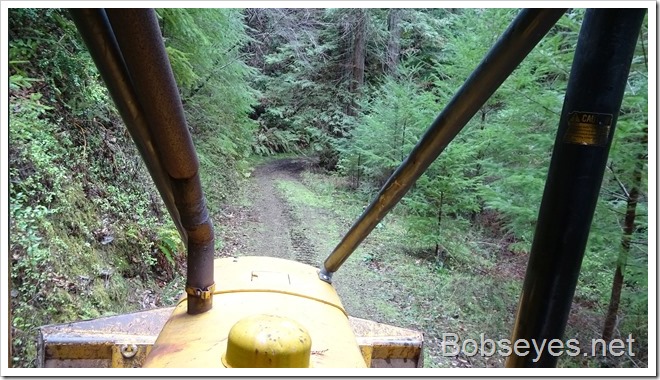 A little walk to the car

I parked the dozer at the bottom of the hill and had to walk down this road about a quarter mile to get my car with the oil. 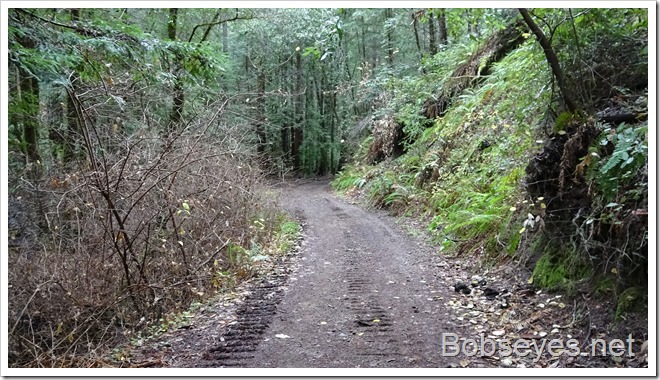 Yes, when I checked the dip stick the oil was real low so I filled it up and double checked the level just to make sure this time and it was a little over full. Great. The oil goes in that blue funnel. 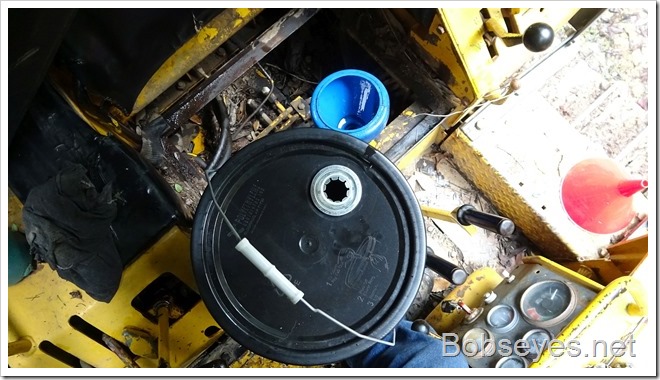 So the oil is full and I’m ready to head back up the hill leaving my car here for later. I noticed the signs over my car. 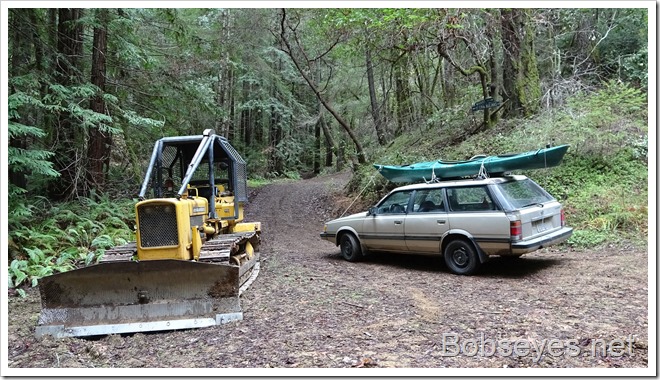 Hummm, maybe I can put my boat in the water. :O) 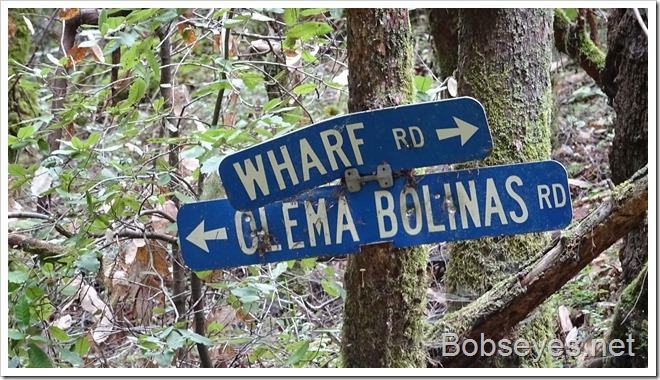 I headed up another road and was going to take this slide out, but I could use the big rocks so I just made a way around it for now until I remove the rocks for water crossings later. 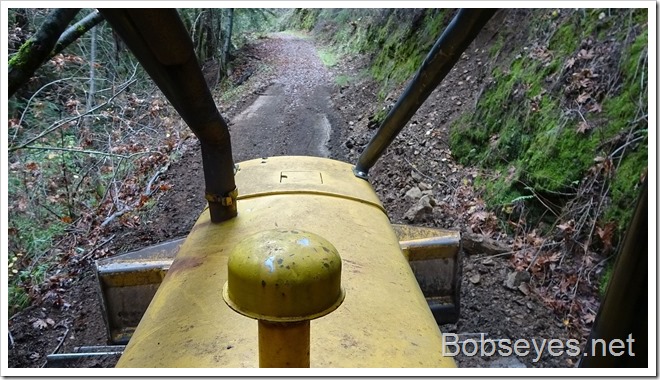 I made it up to this spot where the road was getting washed out by water on the right side so I made a ditch on the left side and built up the road so water can only go down the ditch on the left. The slide is making the road real narrow here so this needed to be fixed or eventually the road will be too narrow to use it and this is the main road up in this area called Pool Ridge Road..The fire guys used it heavily during the forest fire. 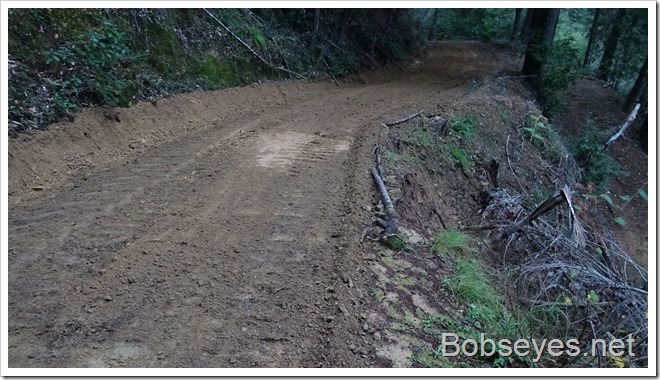 Here’s the same spot from the other side. You can see the road slopes into the ditch on the right side so this should fix the problem when it rains up here. 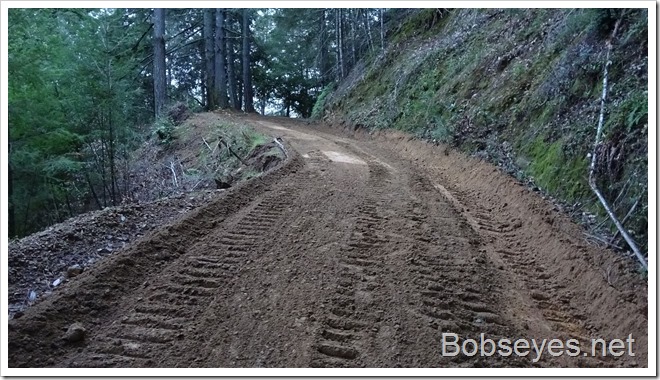 As I was finishing up that, a little  black and white dog showed up and soon my cousin with her husband showed up. She had heard me working as she lives up here. She knew about the wash out and was happy I was fixing it as this is a fire escape road for the neighbors if they need to use it.

Getting dark fast and me without a light

I finished up that washout just as it was getting dark and was going to walk back down the hill by way of the Talking Trees Trail but as dark as it already was I figured that would be too dark and the bogyman would be out and I didn’t have any lights on me. It would be real dark in the trees on that trail so I opted for this ridge road. Even it gets dark here where it enters the forest. 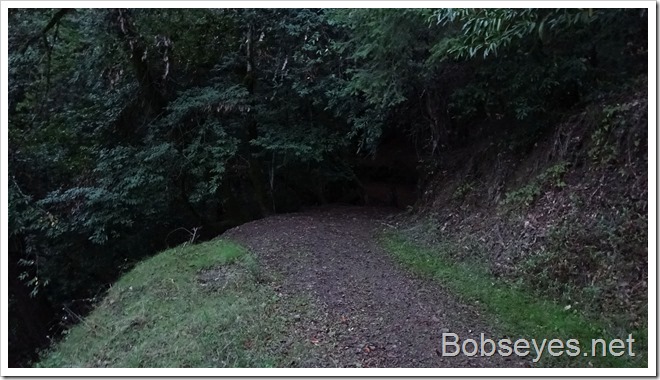 I hurried along on down the hill as it was getting dark fast now and I was sure that bogyman was just behind me somewhere.

Made it back to where I had the car parked and headed on home for the day.

(Visited 91 times, 1 visits today)
This entry was posted in Uncategorized and tagged bulldozer work in the forest. Dirt road maintenance. Bookmark the permalink.