Trying to get to Tuscarora the back way

Tuesday I left Winnemucca and headed out the Midas, Tuscarora Road which is a mining haul road that looks like this. It’s kept in pretty good shape. 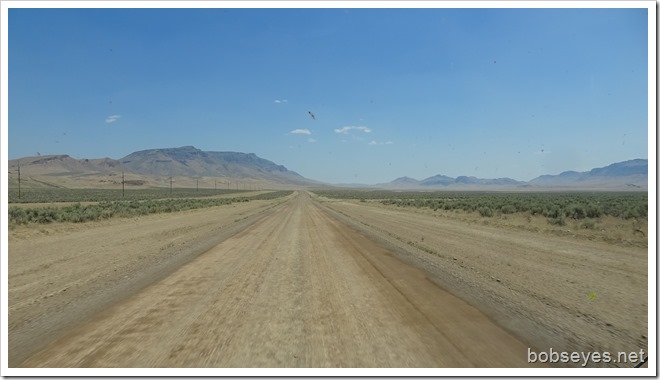 I made it to the Willow Creek Reservoir which turned out to be emptied as they were working on the dam. 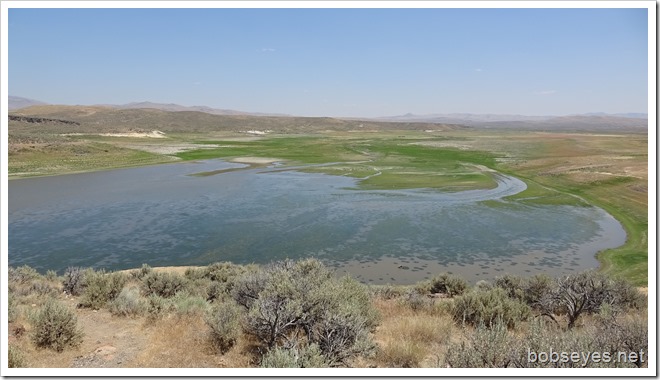 The water is down so the guys can get to the control gate to replace it. They’ve also sealed up the dam as it was leaking badly. 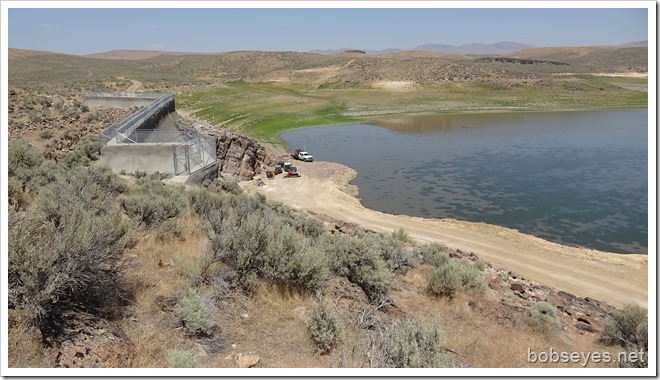 Decided not to camp here

I drove down below the dam where I usually camp at this spot, but because there was no water, the creek was also dry. 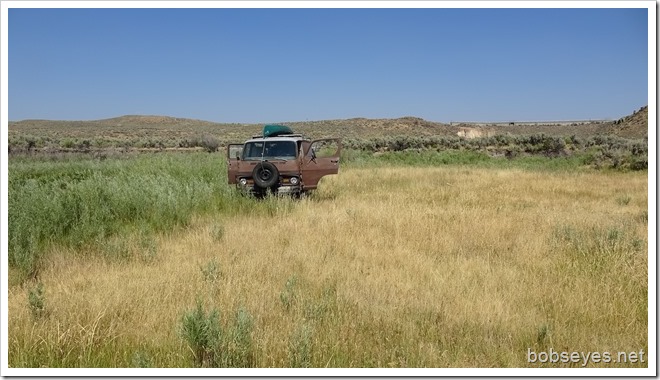 Back way to Tuscarora

I sat around for a bit, but the day was still early so I decided to go do some exploring. I’d passed a back road on the way in that was supposed to go to Tuscarora the back way if I could find the way.

At this point I’m really headed for the boonies. There was more than one road and I wasn’t’ sure which one might go all the way through, so I picked this one hoping it might. 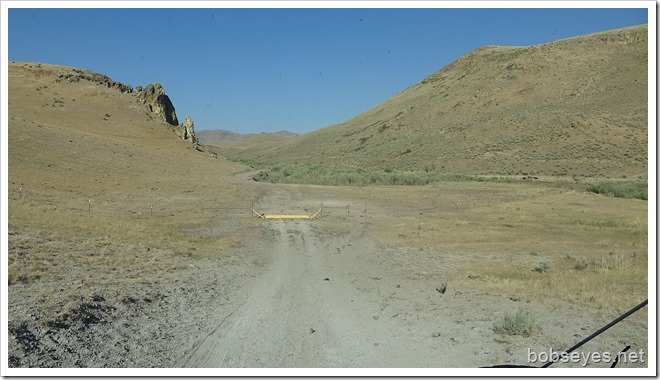 The road got rougher as I drove farther in. 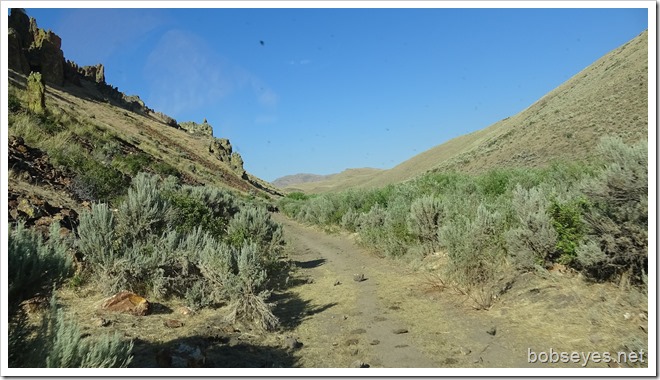 There were a lot of cattle back in here that I went by. 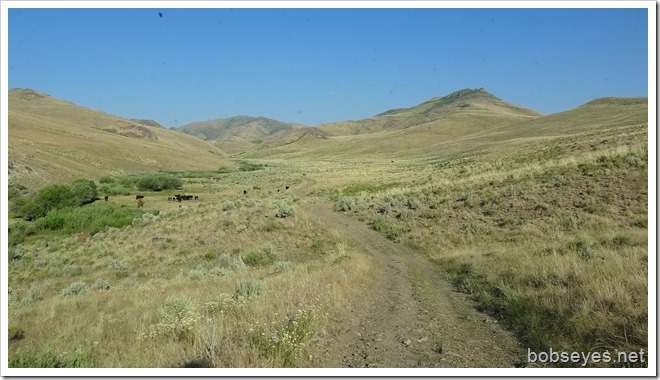 This road wasn’t traveled much. 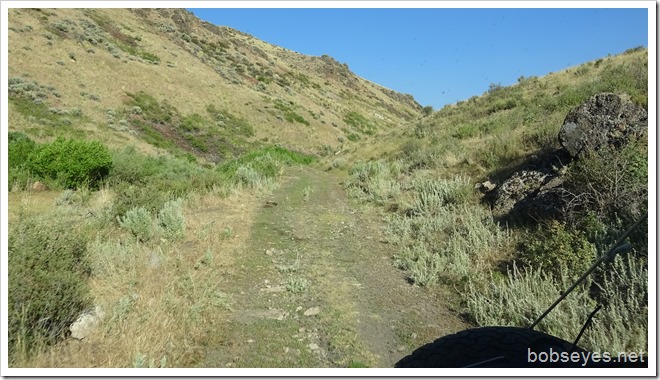 I had to cross some creeks. This one is called Rock Creek. 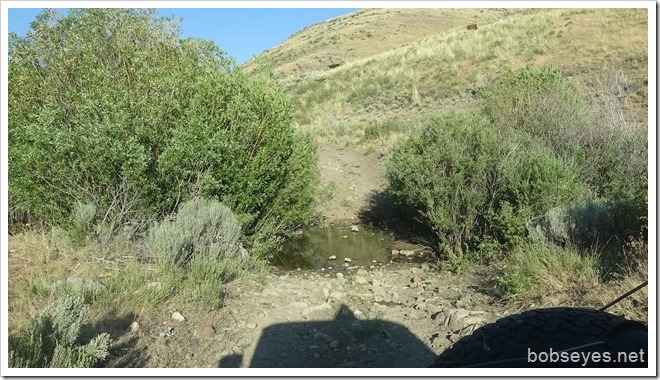 Stopped by this wash out

I figure I was only a few miles from Tuscarora when I ran into this washed out spot. 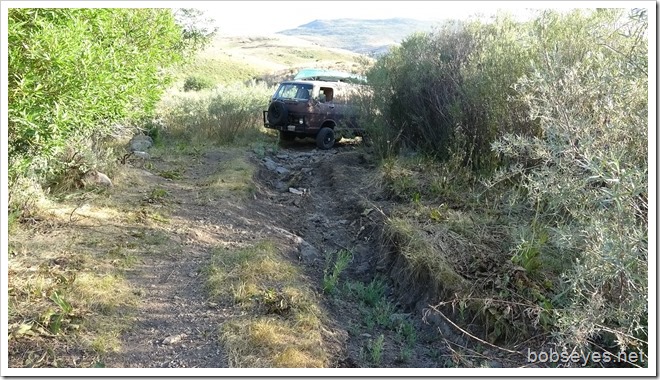 I got out to have a look and it just looked worse. 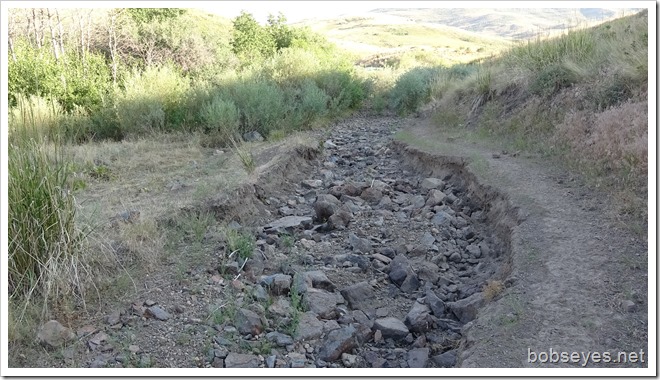 Turned around and found a camp spot

So being by myself I didn’t want to chance it, so I turned around and back tracked back down the road for about an hour or so until I came to this spot where I camped for the night. 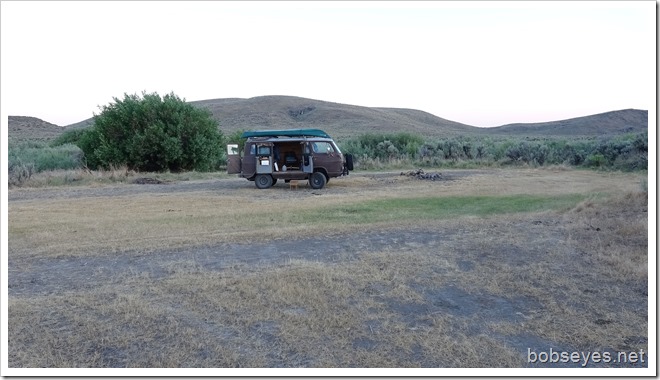 The spot was ok, but the mosquitoes were terrible. I wasn’t careful enough and a bunch of them got into my van so I was up most of the night trying to kill them, but not having much luck. I’d put up a bug screen across my front window and side doors but I didn’t do a good enough job putting them up so they just keep coming until I fixed the screen but by that time it was too late.

It was a reminder not to camp near water.

Back to Willow Creek Reservoir

In the morning I drove the rest of the way out and back to Willow Creek Reservoir.

There were some Ibis feeding along the shore. 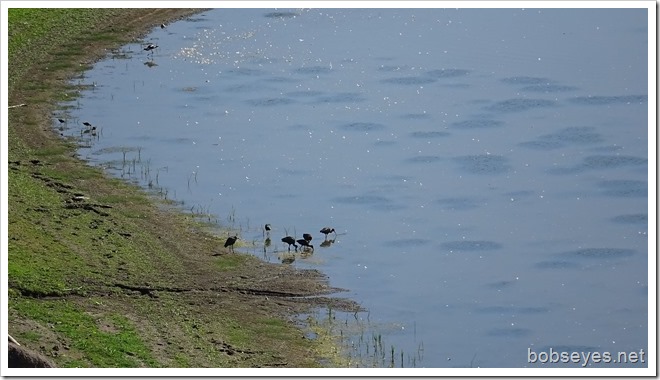 And a few white pelicans feeding in the water. 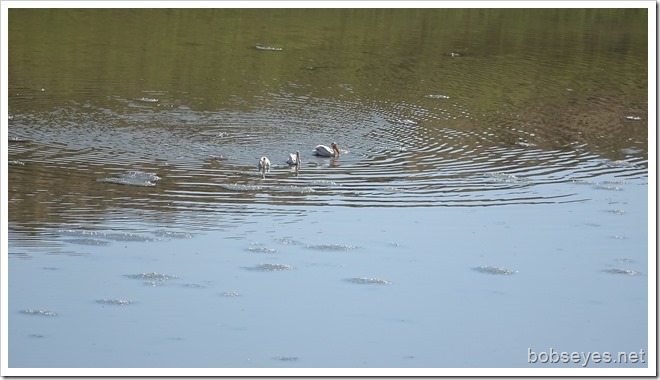 Here’s what the mostly empty reservoir looked like. I could hear all the geese honking down there as there was a lot of them but they are hard to see in this photo. 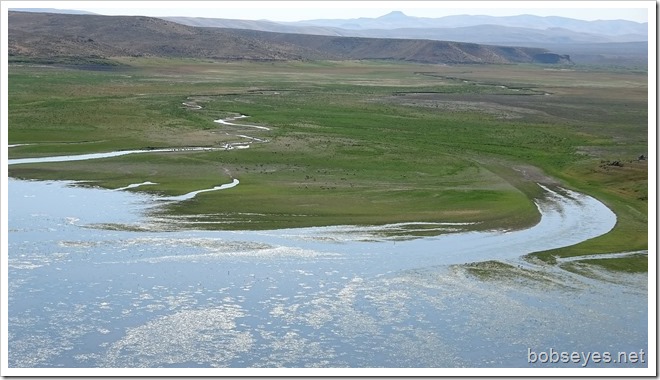 Here’s some of the geese. 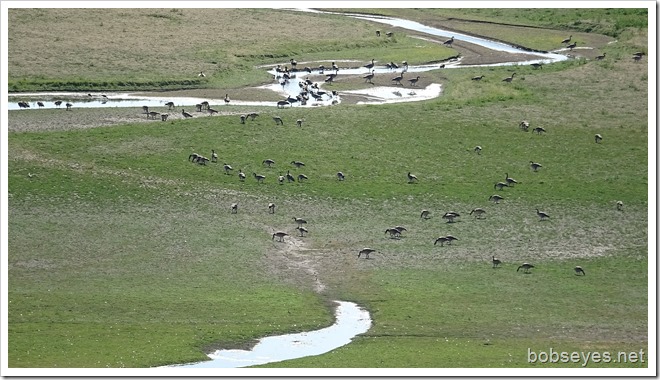 Checking out the dam work

The guys that were working on the dam weren’t there so I went down to have a look at what they were doing. 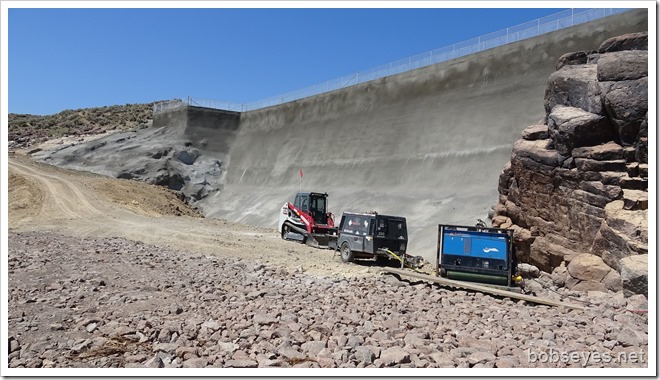 This is the output for the water. They are replacing the gated valve and not done yet. 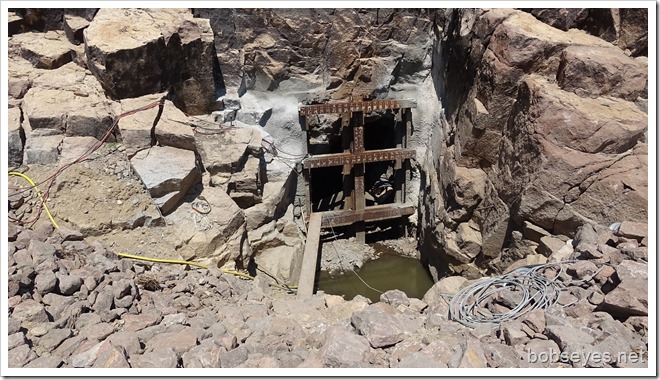 When I got back to my van I packed up and did my once around the van and found this tire low on air, down to 25 pounds, so I aired it up but couldn’t find the hole. It appeared to be a slow leak, so I decided to head out with it to the tire shop at the Indian Reservation a few hours away after I got my air pump out and put some air in it. 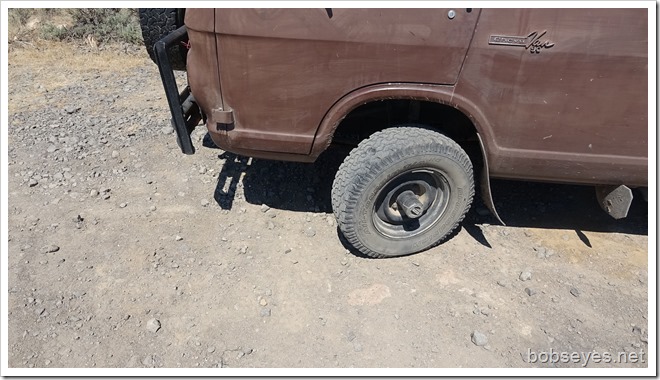 I traveled on this road for about an hour and decided to drive up to Tuscarora to see if there was a tire shop there. 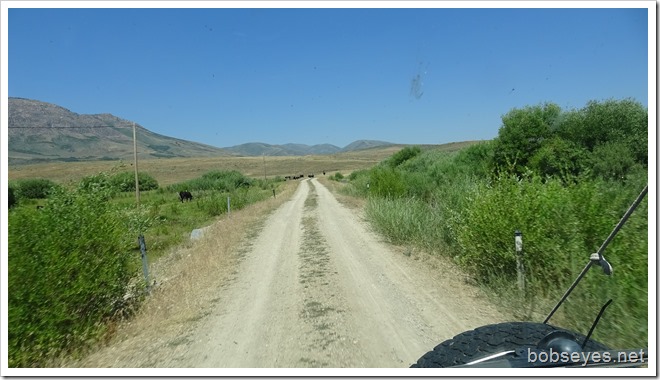 I stopped at the post office there and asked. The guy said no tire shop but try the café at the end of the road. He said Tom is a nice guy that runs the place and will likely help me out so I aired up my tire again and drove over there about fifteen minutes away.

I talked with Tom who runs the Taylor Canyon Club. He was busy prepping some steaks that they serve there. I bet they are real good. But Tom is on air so he said Ron can help as soon as we round him up so they called him as he lives right next door.

. At first we couldn’t find the leak, but with some work we found it. We talked mechanicing and he was interested in my four wheel drive van. He said you’re driving my van around. Ron who’s called Bubba put a plug in it. When we checked it out we found there was another small puncture right next to be big leak. It was too close to the other one so Bubba didn’t want to put another plug so close to the other one as he thought it might fail so he recommended I go to the Indian Reservation to get it fixed as they have more tire stuff there.

I asked how much, but since it didn’t get all the way fixed he said no charge, but at least now it was leaking a lot slower than before so I was much better off. I think it helps to talk mechanicing with guys like that too as it always seems to help.

These guys were very helpful. The Taylor Canyon Club is just a little south once on the paved road just at the end of the Midas Tuscarora road and it sure looked like they served a real good steak as well as other things.

Headed for the Reservation

I headed for the Indian Reservation as they could pull the tire apart and put a patch inside.

That was up the road a couple more hours.

I went by these antelope resting out in the field. 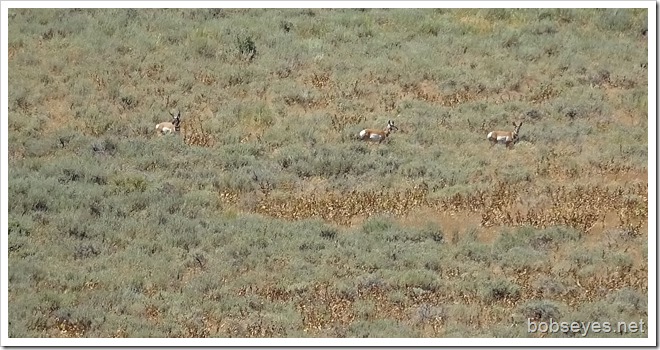 At the Indian Reservation I looked for the house with the Tire Repair sign out front and went up to the door and knocked. Of course I had to  pet the three dogs. A lady came out and said her husband was up in the mountains somewhere. I asked if he’d be back tomorrow. Yes so I’ll see him in the morning.

Camped for the night

I drove a short distance up the road just off the Reservation and pulled in this rock quarry and parked for the night here. 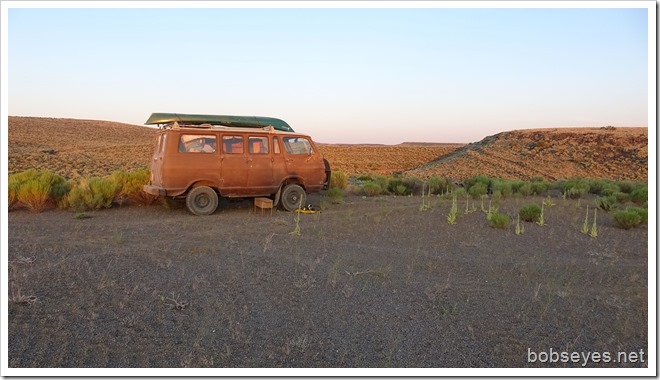 So tomorrow I’ll drive back to his house and see what we can do to get it fixed up.

I’ll also use the internet at the computer lab for the Reservation and gas up the van too.

I may abort this part of the trip

Since that tire isn’t in real good shape I may abort the rest of this part of the trip and head for the Deschutes National Forest in Oregon and then over to Port Orford to get some new tires. So we’ll see how it goes.

I made it to the tire shop at the Indian Reservation this morning at 8AM to get the tire fixed up.

I met Joe at his house and shop. We immediately starting shooting the bull, but finally got to the tire. 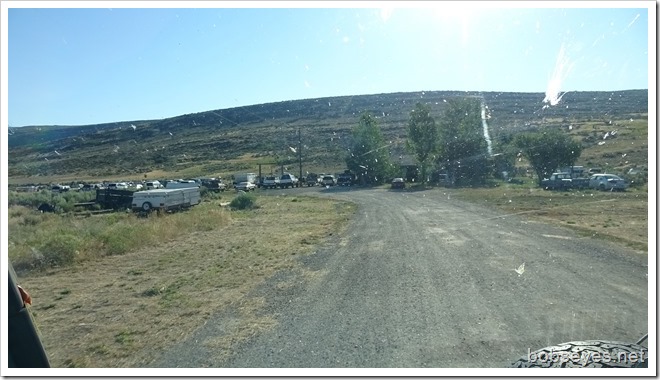 When he got the tire off we spotted something else we hadn’t seen before, a small split in the tire tread near the edge. I didn’t like what I saw. 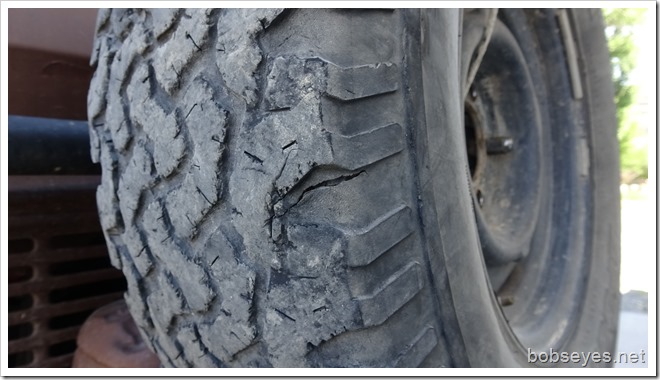 I have a fairly good spare so we decided to put that on instead.

We shot the bull until ten and I headed for the Reservation computer lab to post and check email. I learned a lot of history about this area from all the bull we shot. Joe’s good at it.

So with this bad news I will have to abort most of what I had planned and go get some new tires in Port Orford Oregon so that’s where I’m headed now which might take me a few days to get there.

I was headed that way eventually and had some places to check out, but now it looks like I better go get the tires first.

That’s the way it goes exploring around and having an adventure.