Doing Repairs is Hard On My Hands

Repairs are hard on my hands

I noticed my car making a weird noise on the right front the other day when I was driving it. That meant I better take the wheel off and inspect it to see what was going on. I suspected the big axle nut was loose as when one gets loose, it makes weird noises from past experience. Never the less an inspection of the unit still is a good idea.

So I got the jack out and jacked up the car and got a bunch of other tools out to do the job. 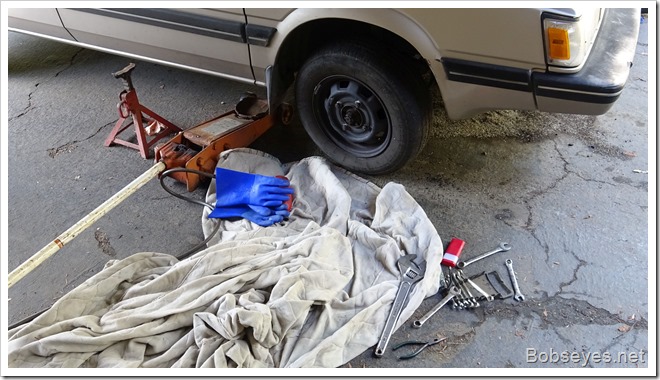 The disc brake parts all looked good and so did everything else, so I checked the big axle nut. It didn’t look loose, so I put the tire back on and lowered the car to stop the wheel from spinning when I put my big wrench on the nut and turned it, sure enough, the nut was loose just a bit, but that’s all it takes.

I tightened up the nut and put the big cotter key back in. I’m not sure why an axle nut comes loose as they have cotter keys in them and the way the thing is made there is no place to wear to come loose. The only thing I can think of is there must be a bit of dirt in there that finally works it way out.

I got that done and cleaned up my tools. It’s also good to know the brake pads still have a lot of meat on them. I didn’t get around to testing out my fix, but it should be ok as it’s fixed this type of problem before.

After a break, I decided to finish the repair on my oxygen bottle regulator for my welding equipment as the parts I needed to repair it had come in.

Here’s the gauge taken apart and the new parts. 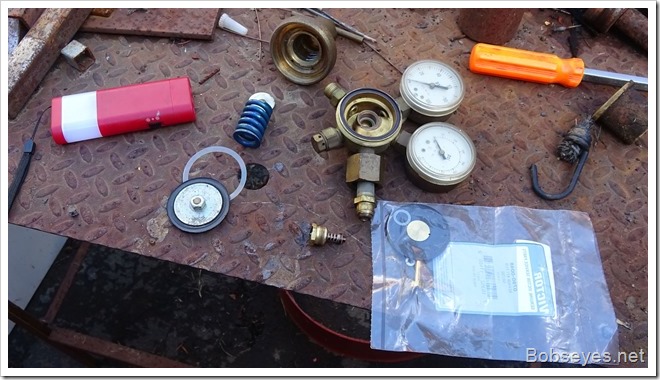 It’s a fairly easy repair. I put it all back together and installed the gauge on the oxygen bottle and turned it on and all was good to go.

Another a break, sitting around the yard in the sun for a bit, I worked on the new gas tank for my Toyota Land Cruiser.

Here’s the old tank and the new one on the right. The new one is actually for later years, but will work with  just a little adapting. The old tank was leaking gas. I fixed it with epoxy a long time ago and it worked just fine, but as long as I’m getting the old Toyota going again, I thought it would be a good time to repair the tank properly with a new one. 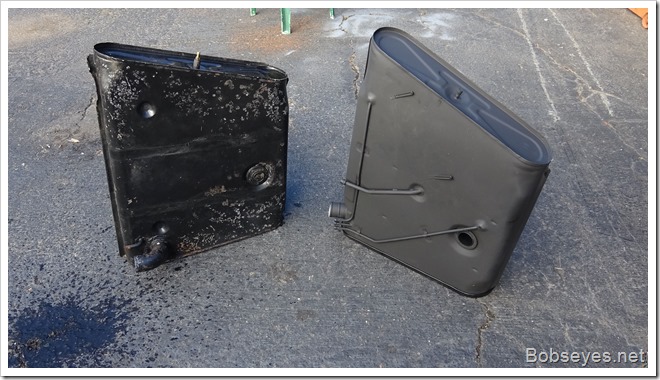 I needed to glue the pads in that the tank sits on so I used some silicone. This is where the new tank will sit. 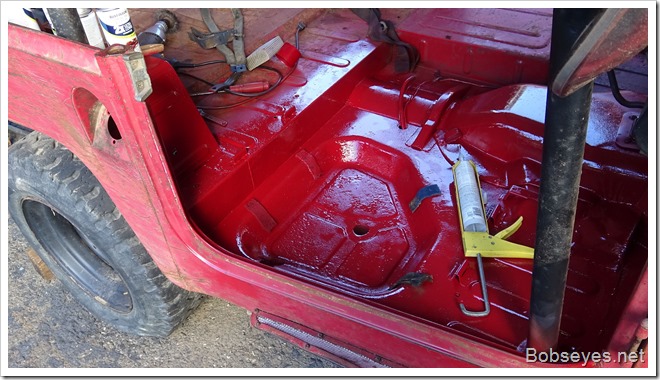 Personally I think this is a bad choice on Toyota’s part to mount the tank here inside the rig, especially when there is a big space under the back that could hold a good sized tank.

It’s a little late to be thinking about a tank underneath, but maybe I should look into that at least a little and see what it might take to do that.

In the mean time here’s the new tank put into it’s spot which is under the passenger seat. 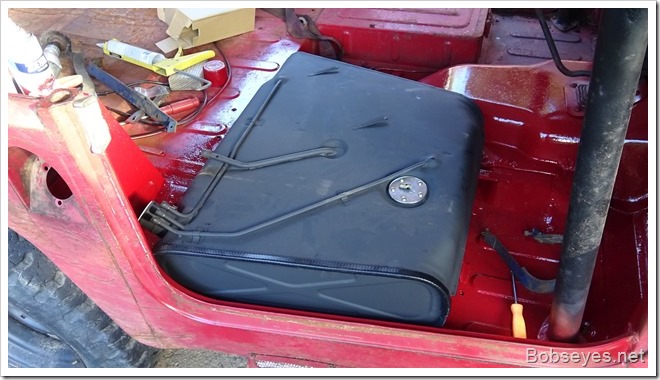 What pipes are what

I wasn’t sure what all those pipes were used for, so I went online to where I purchased the tank and they had a diagram that made it all make sense.

I bought the tank at  http://www.coolcruisers.com/  .

Hands are taking a beating

I wore the blue gloves you can see in the first photo to help protect my hands as they are having some cracked skin problems right now from my corn eating problem body rash.

The gloves helped a lot, but the forces applied to my  hands working on stuff caused more cracks unfortunately. All I can do is say ouch, apply ointment and continue on hoping the hands will mend soon.

I got corned the other day

I got into some corn in Breyer’s chocolate ice cream the other day as they changed the ingredients so that is partly what’s messing my hands up and slowing down the healing process. Once I get corned it takes a week or two of misery before things calm down as in mostly whole body itching and red rashes, especially strong about nine hours after I ingest something.