Doctors Appointment, Some Visiting and Some Chicken Feed

Headed to the Doctor

I got it going early this morning to make an 11 AM VA doctors appointment, my annual one.

No surprises there and things went well. Well except I’m what they call white coat when it comes to taking my blood pressure. That means they make my blood pressure high. I always inform them they’ll have a hard time getting acceptable readings for me but they try anyway.

I take my blood pressure readings at home because of this so I know what they are but they are still hard to convince. We go through the same thing every time I go for a doctors exam.

After that appointment I went over to Wal-Mart to do some shopping. I wanted a new pocket knife but the sporting goods department was closed so I didn’t go to the trouble of trying to find someone to open it so no knife. I did get a couple other things so it wasn’t a total loss. And I found some pole beans seeds I could use in the garden this year to grow some fresh beans.

From there I headed over to see how Marty was doing with his sore back that he’s had for about nine weeks now. On the way I stopped to talk with Rene whose house and all his stuff got burned up last summer in a big fire. He has a place in Port Orford Ore. too so we talked about that stuff and fishing too. He said I could camp park at his place in Port Orford when I’m up there so that was good.

I made it over to Marty’s and found him on his bed but he was feeling good enough to come out to his chair and we shoot the bull for a bit. He’s starting to improve a bit and I hope he continues.

When I left his house the traffic had gotten worse and I had a lot of stop and go trying to get to the feed store which was on the way home.

The feeds store was on the edge of town so once I got there the traffic finally thinned out a bit. I’d ordered some seed that had come in and picked up some more feed too.

I made it home ok and parked the car for a break before unloading the fifty pound bags of feed.

First I got the sacks out of the car to this spot and after another break organized the shed and put all the bags away. 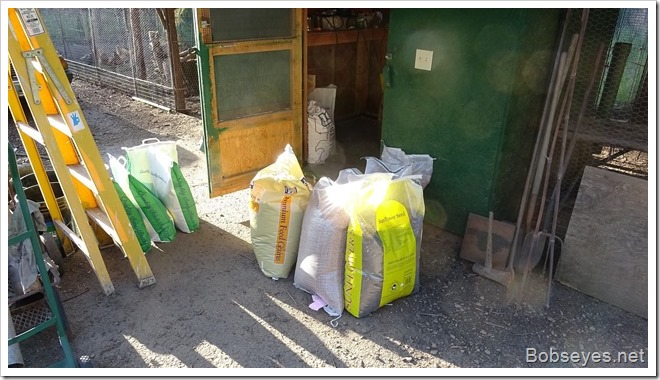 Putting the chickens to bed

After that it was nap time so that’s what I did until just before dark when I went out to close the chickens up for the night. They were all up on their roosts so all I had to do was put the new eggs away and close up the pen doors.

I went in the house and that was my day.

2 Responses to Doctors Appointment, Some Visiting and Some Chicken Feed