Today I was going to my yearly doctors appointment at the VA at 10:30 so I had to get up a bit before I usually do. Just after eight I was about to hop out of bed when the phone rang. Usually I don’t bother answering the phone before I get up but when I have something going on such as this appointment I do and good thing I did as my doctor called in sick so my appointment was canceled so no use getting up yet.

Going to Jenner for a  yak

Around ten I got up and checked my computer and found an email from John saying he’d be down at Jenner around 10:30 for a yak, so I quickly got it going and headed down that way as they’ve been having some real big waves the last day or so.

I found John and his brother Ray there just in front of the boat ramp in their boats so I backed my car on down the ramp and joined them.

We headed down towards the river mouth as we could see the waves were coming over the sandy beach down that way.

I’m following Ray and John down along the river’s edge to the ocean up ahead about a half mile or so. Nice day just after a big storm with almost no wind. Nice, nice. 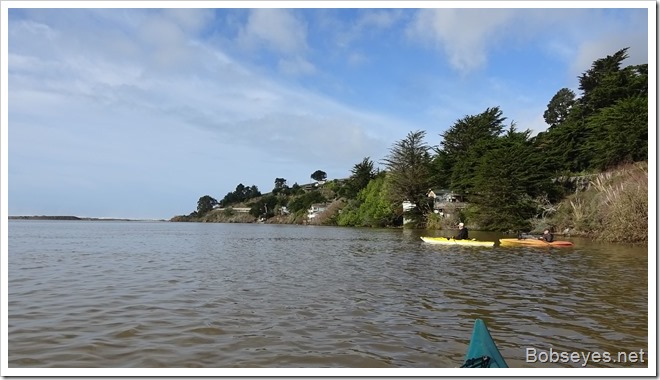 The view as we paddled along looking into the river’s mouth out into the Pacific ocean where the white water is in front of me which is the open river’s mouth where we are headed as that’s where all the action is today. 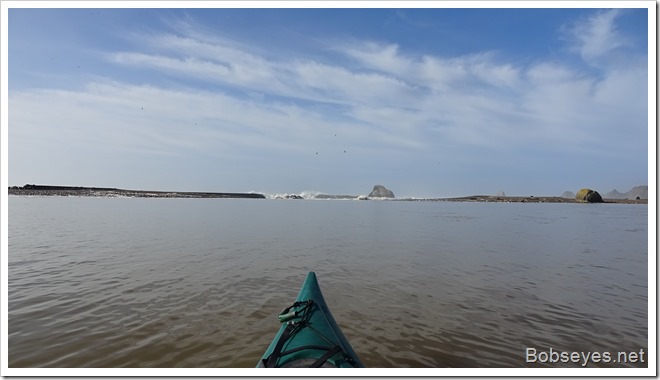 As we paddled closer we could see a bunch of birds and seals resting on the sandy beach and the ocean was fairly rough, but not as rough as it was yesterday as I  heard it was the roughest then. 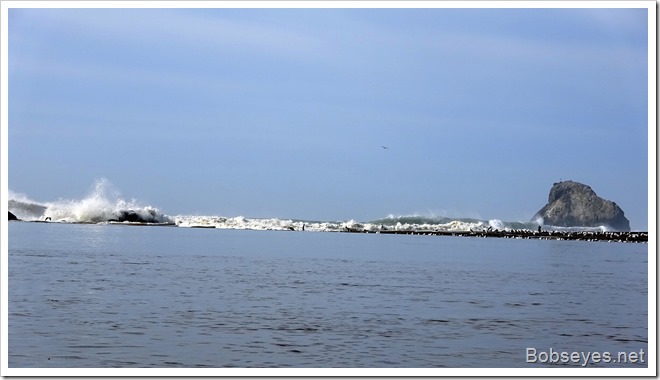 Of course we were all shooting the bull as we slowly paddled along. John talks with his hands and arms a lot. 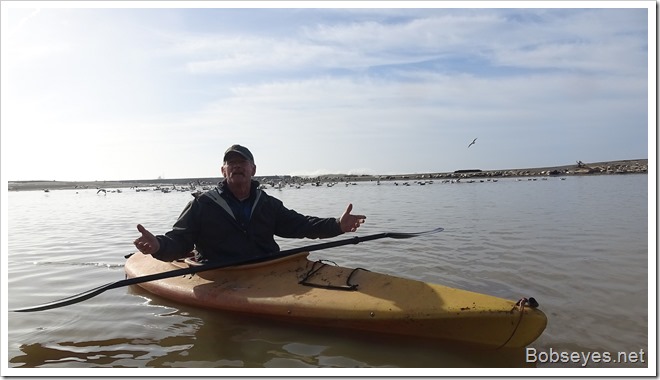 Paddling to the end of the river

We decided to paddle past the mouth area to the end of the river just up ahead where we went by these harbor seals on the sand. We could see a bunch of foam and wood debrie at the end of the river and maybe we might find some fishing equipment there for John as he fishes a lot and is always looking out for stuff. 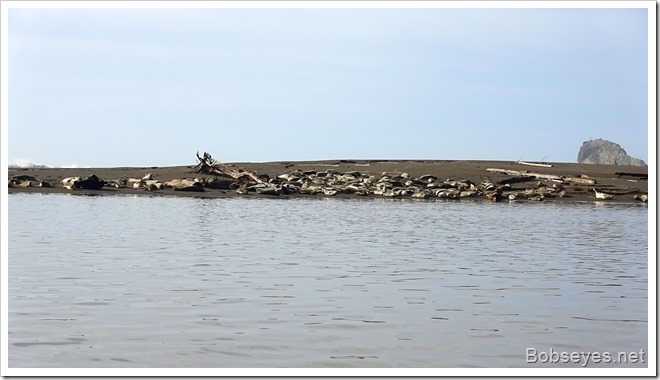 Here we are at the end of the river where all this foam and debrie has collected. With all the foam on top it hid most of any goodies that might have been in there, but John looked hard anyway. 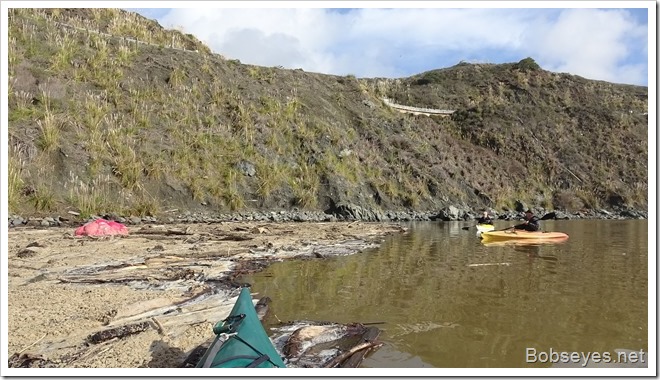 John beached his boat and got out to have a look around for stuff while Ray and I sat in our boats in the foam looking for stuff. 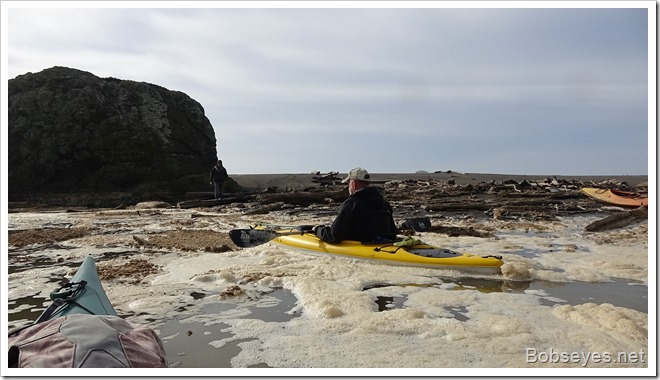 We didn’t find anything that was useful to us. Although John found a nice peace of clear  heart redwood board that was temping him but it was a bit large for his boat and he wasn’t sure he wanted to deal with it. He decided to put it up on the rocks where he could come back on a hike to get it if he decided to keep it. There are lots of nice pieces of wood coming down the river most of the time. Lots of it looks old and maybe not go good, but inside a lot of that wood is real nice especially the redwood pieces as redwood doesn’t rot much like most other woods do.

After sitting around there for a bit we headed back over towards the mouth. The waves smashing into the rocks blow a lot of haze into the air. 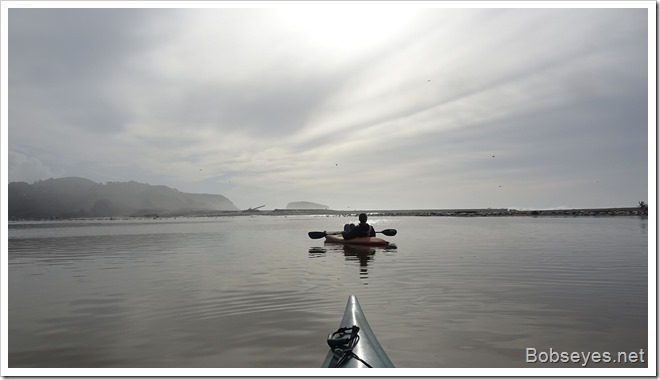 Even though it was low tide we think, the waves were still crashing over the rocks as we approached the area again and did I mention the waves make a lot of noise pounding away. 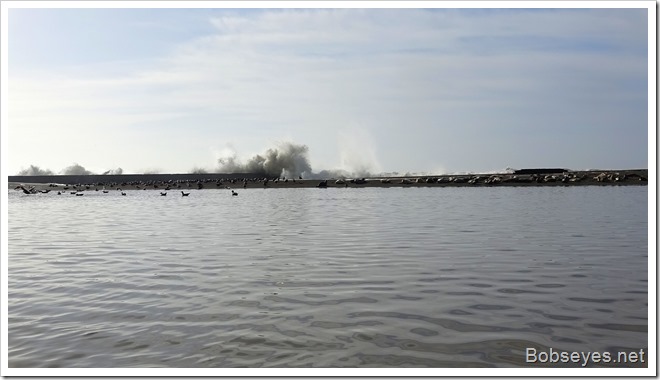 I went by some of the harbor seals a bit closer than earlier. 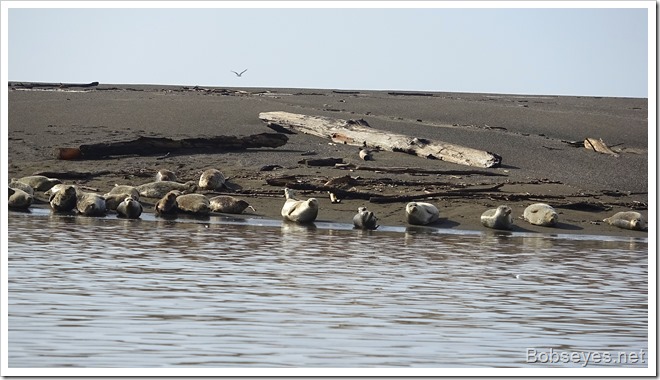 John said he was going to paddle nearer the open mouth to see how strong the current was so he headed over that way while I watched. If you get into the current of the river headed for the ocean you may have to paddle like hell to keep from going out into the ocean. Sometimes that sneaks up on you when you might be watching and you all of a sudden realize you are in that current. I’ve been in it and know it will make you pucker a bit as the ocean is no place you want to be if you value your life, especially on a day like today. 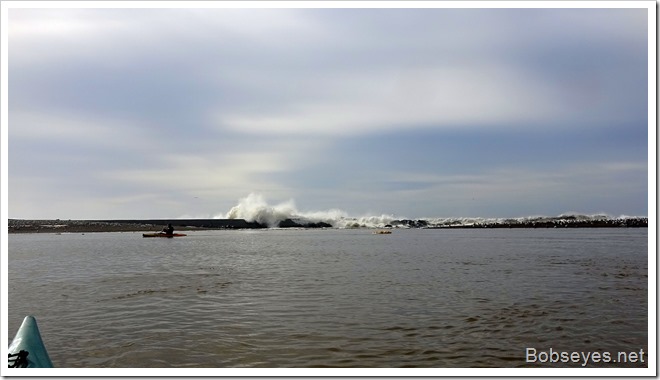 These seagulls took off as I approached them to get on by to meet back up with John. 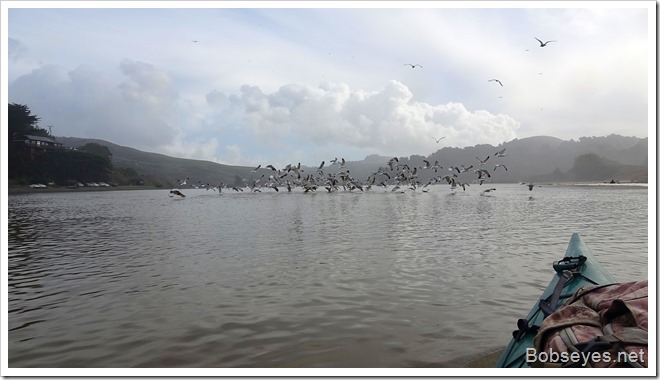 When I caught up with John he was sitting in a big pile of foam which comes off the ocean and I read somewhere the foam is mostly made of of dead plankton. 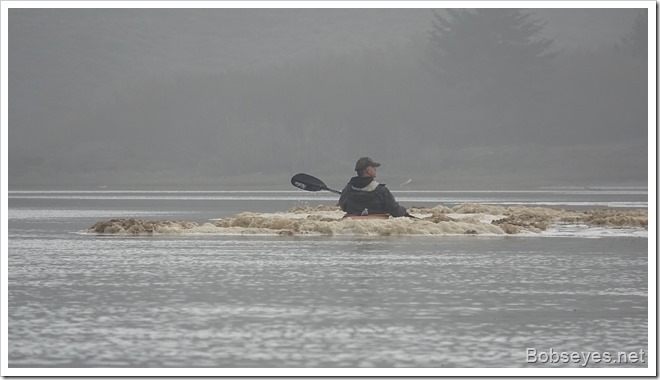 I asked John how the current was. He said he got into it and had to paddle like hell and felt the pucker factor. I just smiled as I’ve been there myself.

Going up the back  channel

We paddled on up the Penny Island back channel which was nice and flat and calm, what a nice day. 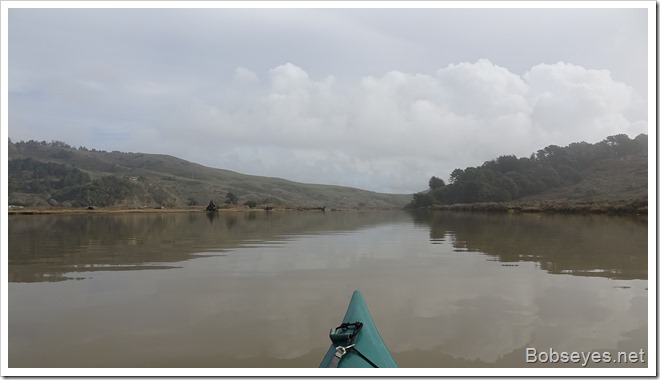 At the upper end of Penny Island Ray pealed off and headed back to the boat ramp while John and I headed on up the river a bit more along it’s edge shooting the bull and just moving along slowly enjoying the day.

We didn’t go very far as John had to meet someone so when the time came we headed on back to Jenner putting our boats into a drift in the river current. 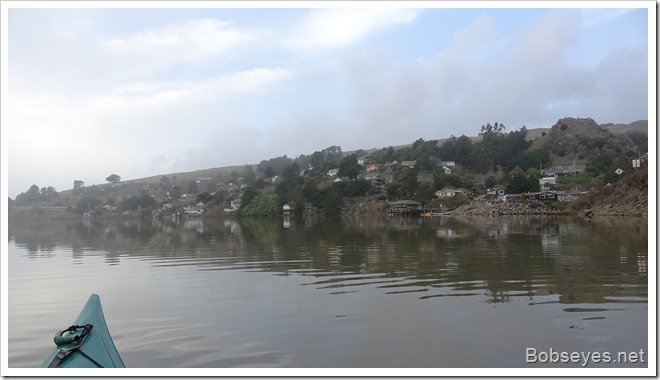 I think I might have caught John sleeping. He’s always real relaxed in his boat. He looks like he’s sleeping but I think I just caught him with his eyes closed. 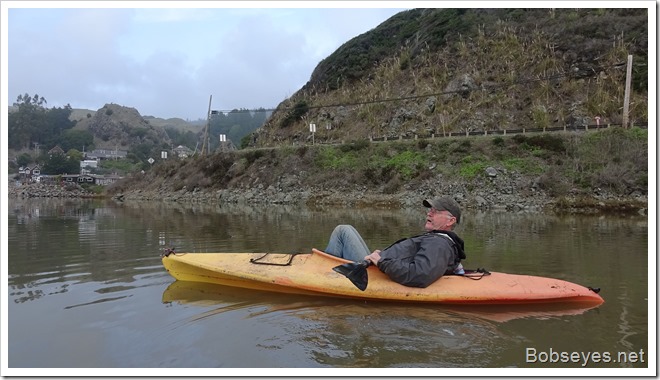 John and I made it to the boat ramp and loaded up our boats and went on home for the day.

Once home it was almost time to let the chickens out to graze, but first I had a cup of coffee then when out and let them out for a bit before it was time for them to go to bed.

Time for me to go in for the day too stopping at the wood pile to grab some wood for the wood stove.

Thanks to the doc

And that was my day for a nice one. Thanks Doc for being out sick today. A paddle at Jenner is much nicer than seeing a doc.

I don’t really have to see the doc as the VA puts my lab stuff on a web site I can go see so I checked out my lab stuff last night as I’m interested how I’m doing as I can only eat a few things and might be low on something.

I found three things of concern. My vitamin D was just a tad low which is expected for this time of year so no worry I’ll just a get a bit more sun.

My Psa was high at 5. something which isn’t good, but I’ve had it there and looked at before so that wasn’t as bad as it looked. I think part of it being high is that’s where I itch the  most from the corn stuff. It hasn’t going way up since the last time so I’m ok with that.

There was a surprise

A surprise was my cholesterol was high. Considering how I’m mostly eating vegan that shouldn’t be so maybe something went wrong with the test. At any rate I don’t really care because with the corn sensitivity problem I have I only have certain things I can eat and that’s that so I don’t give a hoot what it reads. As a matter of fact because of the corn thing I don’t give a hoot about most of the modern doctoring they do these days. Most meds have some kind of corn stuff in them and it’s hard to tell for sure what has and what doesn’t.  Since I’ve been trying to get all the corn stuff out of my system for over fifteen years without succeeding, I no longer do any meds, not even any pain pills.

So now I don’t really need to see the doc but they’ll likely insist and I’ll have to defend myself to keep them from doing anything to me. :O)