I needed to keep working on my Toyota’s brake repair job, but when I went out in the yard this morning the sun was still behind some big redwood trees as the sun has moved south for the winter so it gets blocked when you need it most. It’ll pop out in an hour or so.

I’m always moving dirt from one place to the other so I got the shovel and the wheelbarrow out and moved some dirt from under this log to a spot that needed some dirt in the back there. The dirt was slowly moving onto the rocked road bed and I could use  it in the other spot, so that’s why I was moving it. 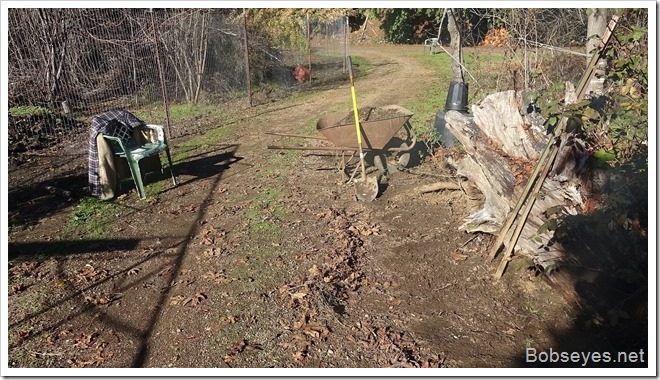 I moved it to this spot that was low. 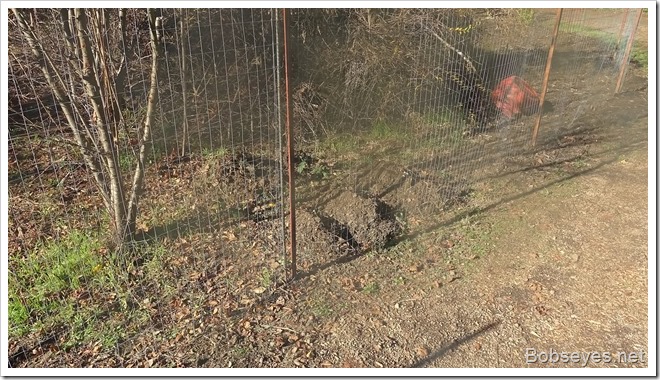 During the process I found these daffodil bulbs which I had a good use for. 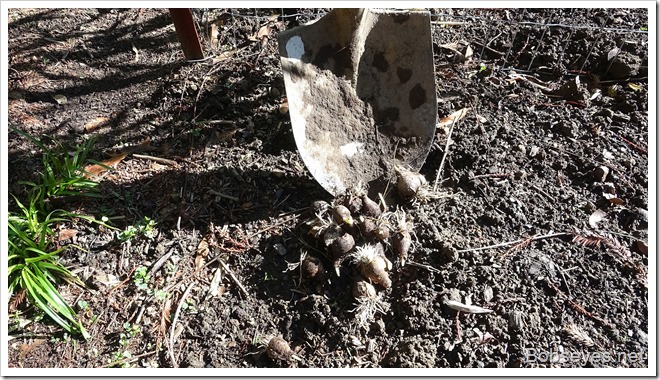 I planted the bulbs along this fence so they should pop up for spring. I like daffodil bulbs as they are no work once they get planted and they reward you with some of the first spring flowers every year once you get them planted and they are easy to plant. 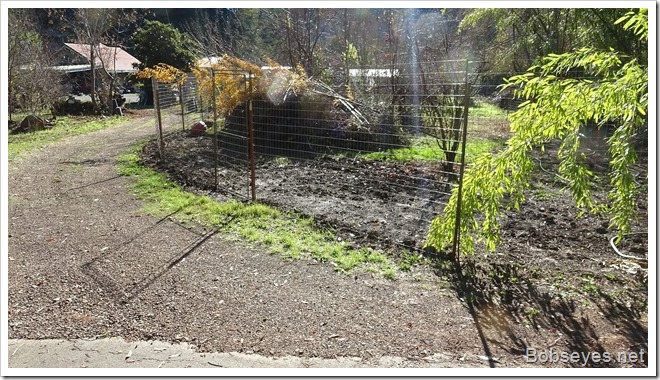 Gave the chickens some more room

I’d been thinking of letting the chickens into my other main pen as it’s not being used right now and would give them more room. Right away they went for the small grow panel in there and ate the tops of the weeds off. That’s how a grow panel works. It keeps the chickens from killing the plants as they like to eat them down to their roots. 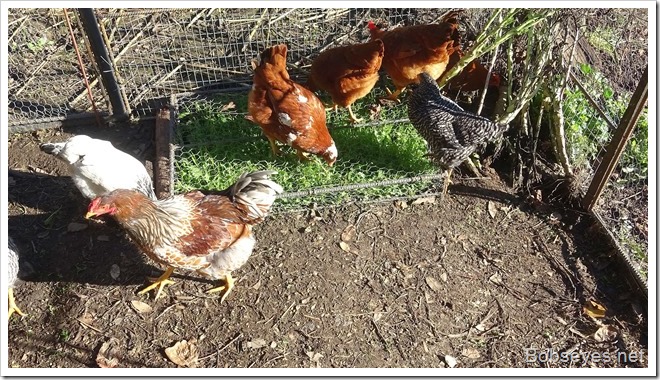 I was sitting their in a chair watching them when this one jumped up on my lap. 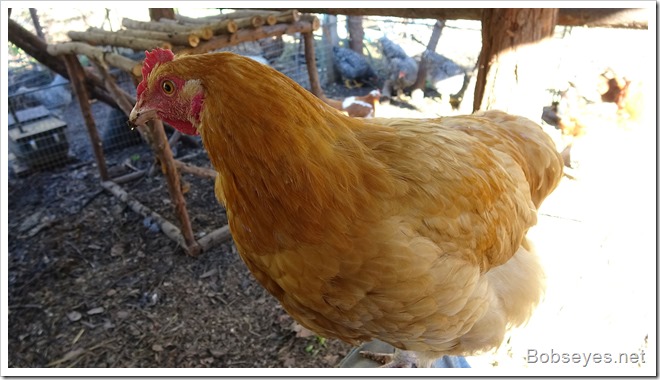 I was looking at the  chicken poo under their roost and decided to put some wood chips under there to help collect the poo as it would be good spread under some of my fruit trees.

Here’s the wood chips just as the chickens came over to inspect my work. 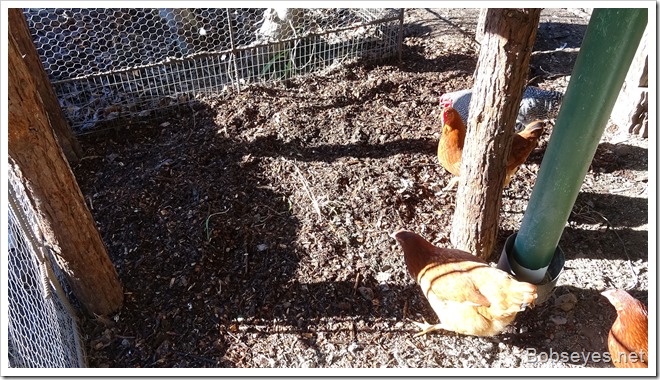 Getting the rear door wires repaired

In the afternoon my brother Tom came by to fix Dominique’s broken rear door wires as most of the stuff including the door lock didn’t work anymore. I set him up with the soldering tools to repair it. 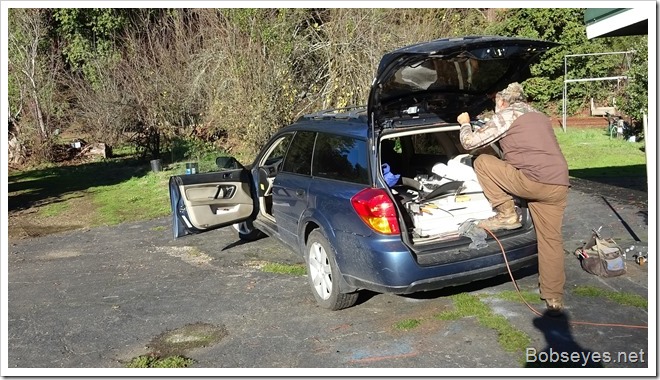 We had to get the ends of the wires tinned with solder and then solder them together with some insulation over them.

Here’s Tom doing the wire surgery. We had to add some extra soldering acid as auto wires seem to oxidize easily and don’t like to be soldered without the extra solder flux. I say extra as there is already flux inside the solder but it’s resin which is a milder acid. 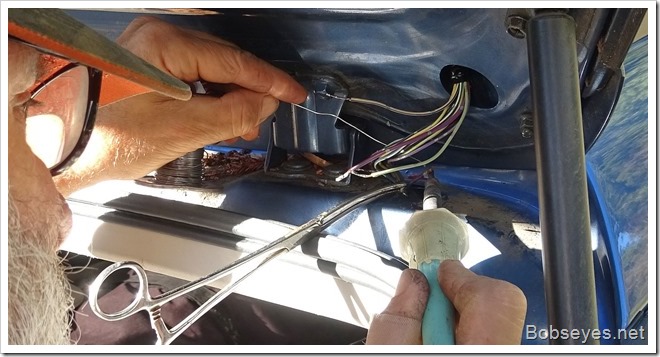 There not much room to work there but Tom got all the wires soldered and insulated.

When he tried the lock I think he was surprised it worked as he got a big smile on his face.

I mostly supervised that job and helped when he needed it.

After a short break I got a bag and walked over to one of Tom’s gardens. 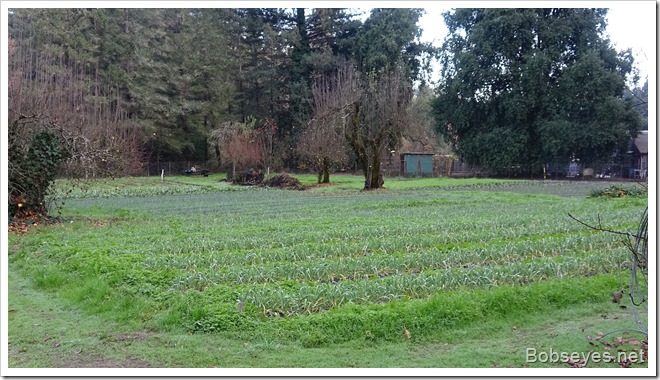 I wanted to get some kale for a big pot of vegetable stew I was going to make tonight. The dark stuff is the kale. And yes there are lots of weeds there as he does organic type gardening and the weeds don’t really hurt much and are much better than any sprays. 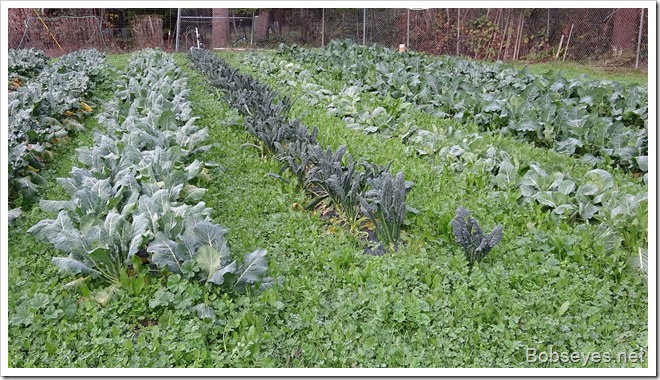 I took the kale home and was thinking some carrots would be nice so I went to the carrot patch and dug up these little guys and washed them and ate them as I like them better fresh than cooked. They were sweet and crunchy. 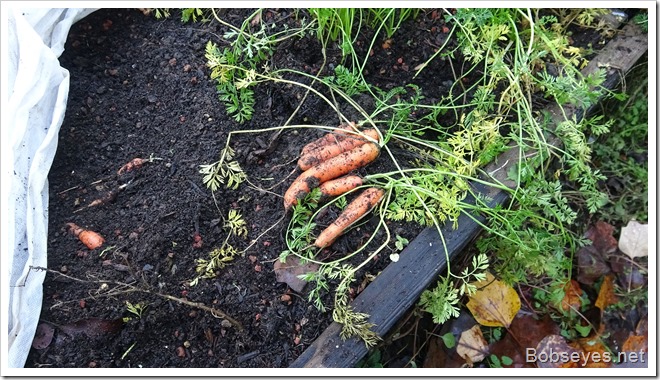 By now it was just after 4 and the chickens where making a lot of racket wanting out to graze for the day so I let them out. They go right to this spot in the raspberry patch as it’s the luscious place in the yard right  now to eat weeds and bugs. 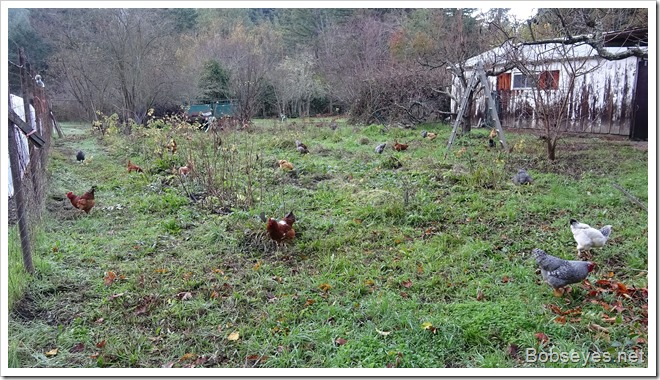 Around 5 the chickens go to roost and I close them up for the night.

I never did get to work on my Toyota brakes. Another day.

That was my day for a nice one as I didn’t work too hard. :O)

Now I need to get all the vegetables cut up to get that big pot of vegetable stew cooking away. Interesting enough, I like the vegetable stew much better than eating a vegetable with my dinner. It  makes lots of rich broth that I can add other stuff to like noodles or rice or just eat a big bowl of the soup which is good too. Yummmmmm.