I was expecting my brother Barry over with his dirt bike around noon for a dirt bike ride up in the hills.

He showed up and dawned his riding gear and got ready to go. 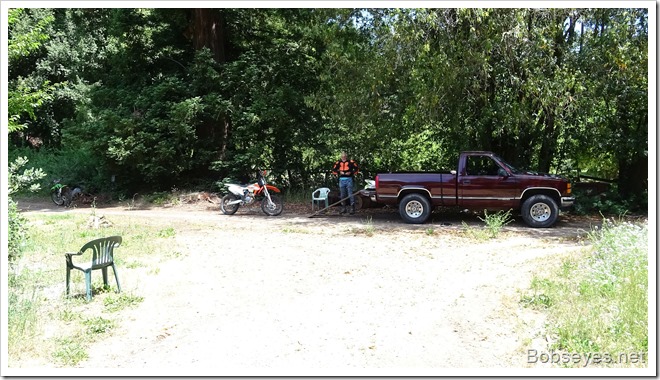 OK we’re ready and off we go across the highway and on up into the hills. 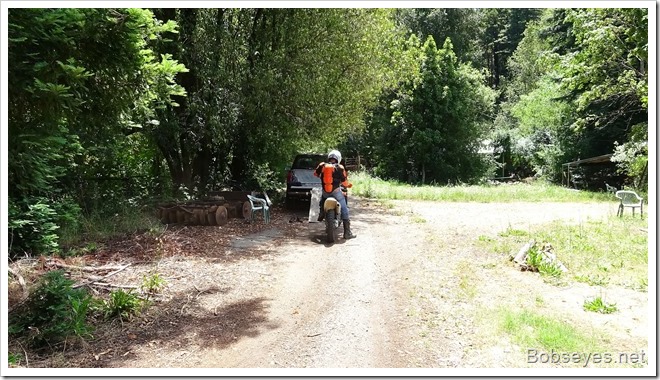 We rode around on some roads and eventually made it to the over look for a break. There’s a little bit of shade there under the tree and Barry’s taking a break on the ground. 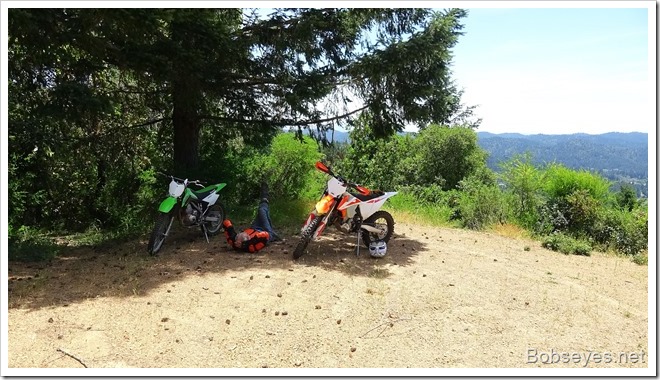 A walk checking out a slide

From there we rode down the backside of the hill to check out a slide on the road. We stopped here and walked the last several hundred feet up the road to have a look at the slide. 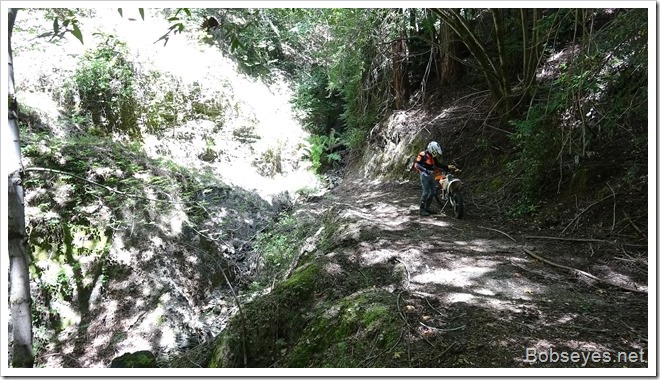 It looks like a water spring popped out here above the road and the hill sled out last winter. Not passible without at least a bit of shovel work. 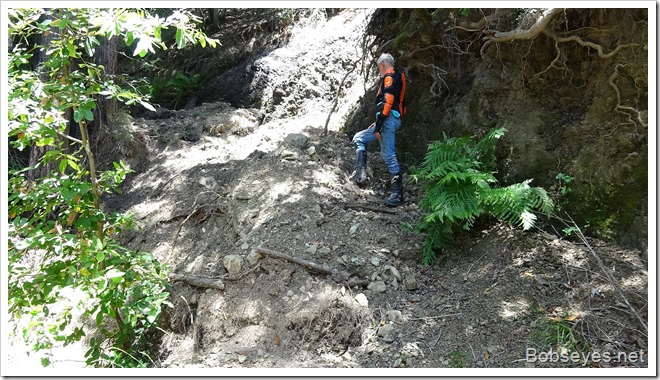 My bother looks like a space man with his riding duds on as we walk back to where the bikes are parked. That walk was just enough to stretch older bones and muscles. 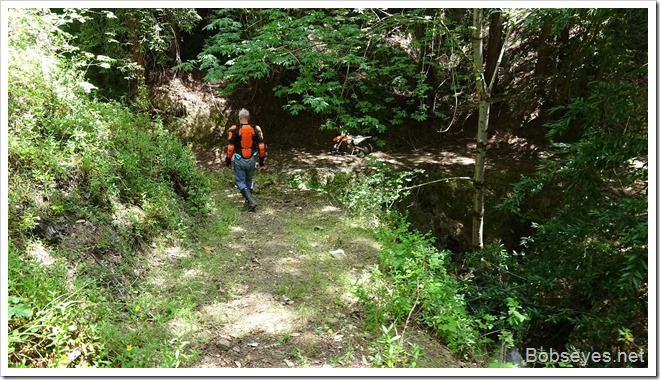 I was leading and had to make a sharp left turn to get onto this road, but the back tire spun out and I came to a stop on this little hill and couldn’t hold the bike up so it and me went down. I rolled off the bike and into a summer sault and got up laughing. Fortunate for me they taught us a lot of tumbling in school on rainy days as automatic rolling when falling really helps keep from getting hurt. Barry had just pulled up as I rolled off in front of him. 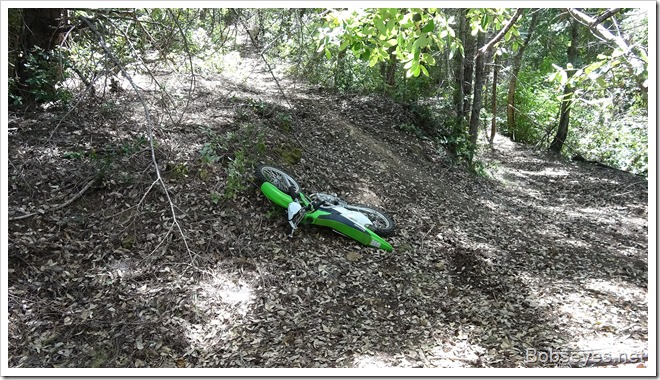 A bit of blood

I did suffer a little blood on the right elbow and realized I’d likely suffer for this tonight, but what the hey, it’s all part of dirt bike riding which really puts an older body in shape if you can stand it. :O)

I picked my self up and got the bike back up too. No damage to the bike which is a good thing as the bike is another  brother’s who reads this blog. :O) I ride the bike to keep his battery charged up as he’s not been riding it for awhile now. Older age doesn’t always let one do what they want to do.

After getting going again we made it the short distance to Top of the World here and took a bit of a break. 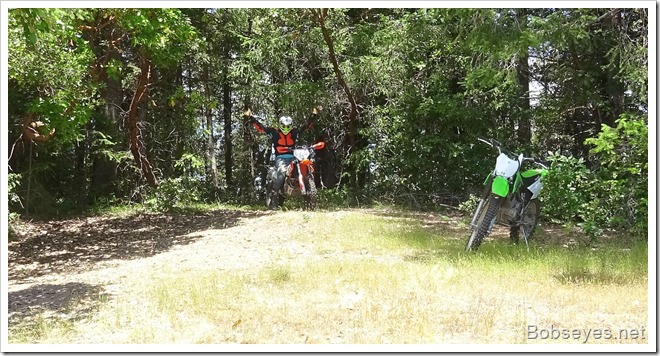 Here’s the view from this spot out over the forest looking south more or less. 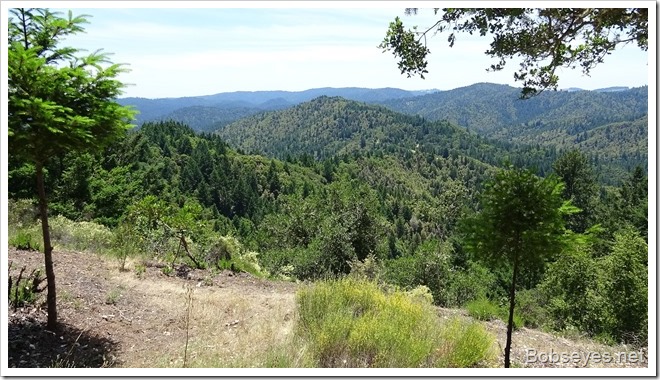 We rode around some more and made it back to the over look area where I was going to take a break as I was beat by now. But my bother was hot in all his gear and it was a rather warm day so we headed on down the hill towards home.

Barry took off for home and I went in for a nap as I was pretty beat. It’s not like the olden days when I could ride a dirt bike all day without getting tired out.

Later in the day I went outside to enjoy some of the day. I let the chicken’s out into this area to graze. 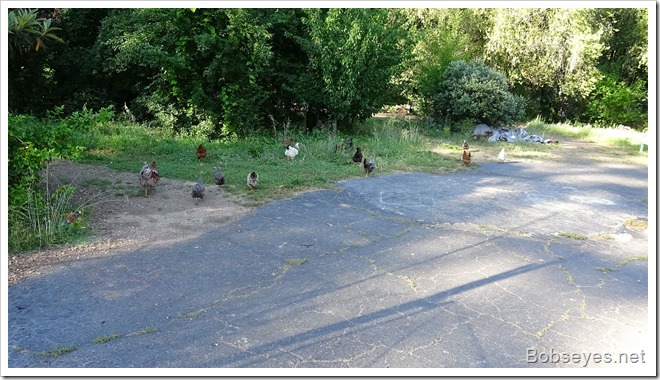 I knew some new chicks were about due so I checked the nesting box that was due and sure enough there were some new chicks in there. I counted three so far but some more eggs might still hatch out.

This is the nesting box and that little fuzzy thing is a chick that just hatched out. The rest of them are under the momma hen staying warm. 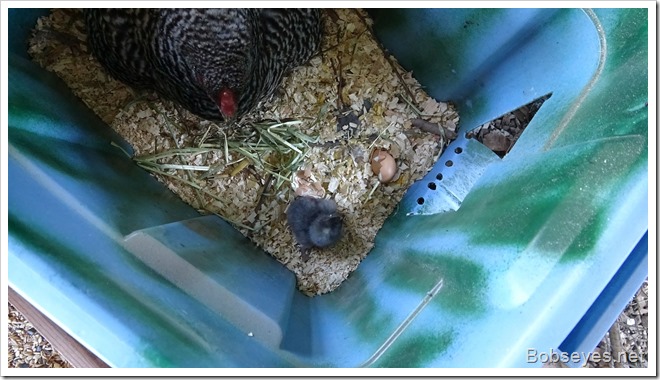 I was walking around my orchard eating some plums off the trees when I noticed a lot of buzzing up above me.

When I looked up this is what I saw. Some honey bees are swarming. 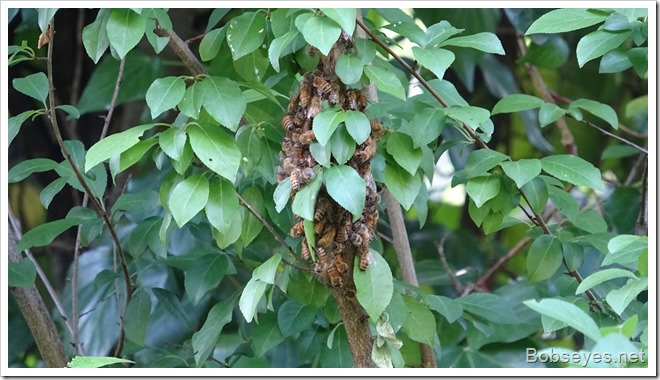 I spent some time chair hopping and walking around the yard just before it got dark and that pretty much was my day.

Nice day and I got some good exercise.