Dirt Bike Ride With Tom and Barry Through the Fire Area

Barry came by this morning after he and Tom did some fire prevention on another piece of our property across the river.

We had a mission to find the Cal Fire rehab guy as Barry wanted to talk with him, but where was he?

The best way to find him was to go look for him on our dirt bikes as he was supposed to be in the fire area somewhere. So Tom and Barry and I hopped on the dirt bikes and took off up through the state park. 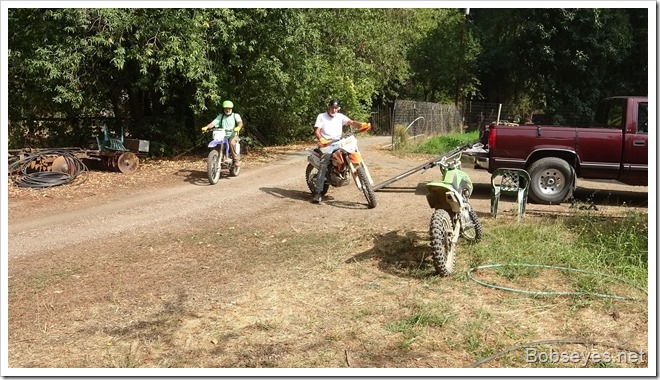 We stopped in the park to talk with Brandon thinking he  might know where he might be. Turned out he was at some other location today.

Brandon informed us this was the last day we could ride through the park without getting cited. We knew that was coming soon so no surprise. 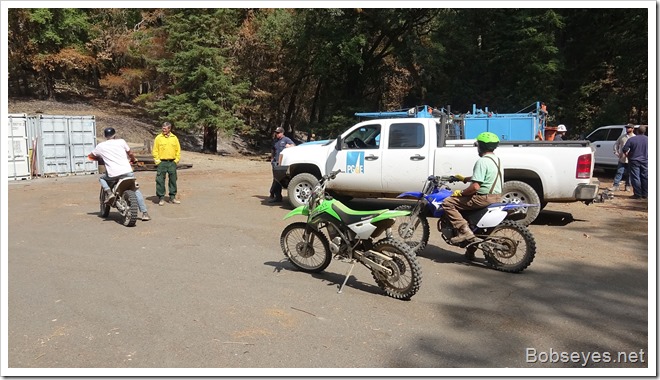 The power guys said the hermit would get his power restored by Friday. He’s been home for a couple of days without power and can get by as he didn’t have any power when he first moved there.

So no one else knew we knew where the rehab guy was so we had an excuse to go for a dirt bike ride and look for him in the fire area up through the park.

We stopped here so Barry could use his phone to call the Cal Fire rehab guy. He was able to get the guy and told him what he needed to know. 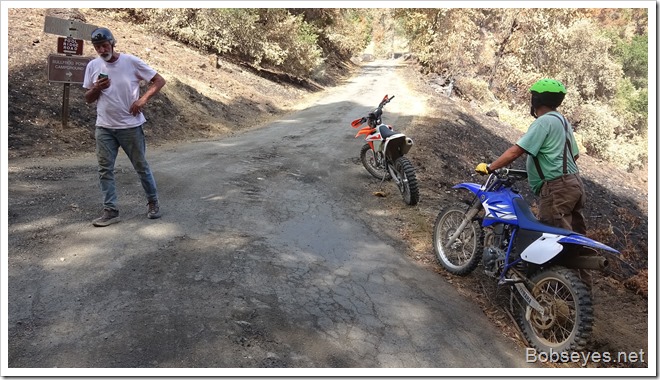 My brother Tom hadn’t been up to Bull Frog Pond so we headed up that way stopping here to check out the view. Still lots of smoke in the sky. 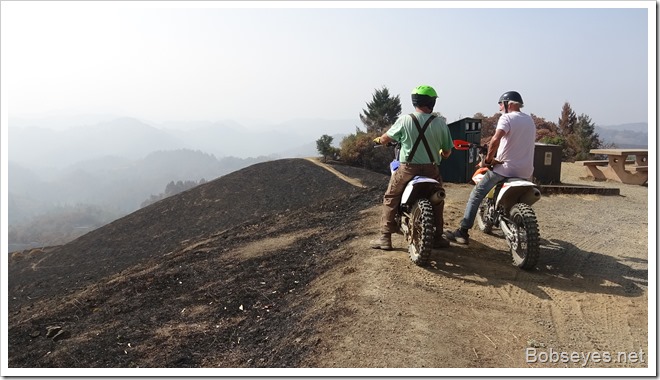 This was the view from that spot. 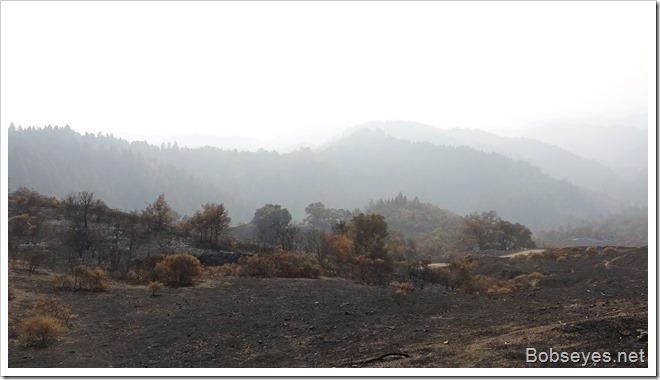 We made it down to Bull Frog Pond. Not much water in that pond or for that matter any bull frogs. 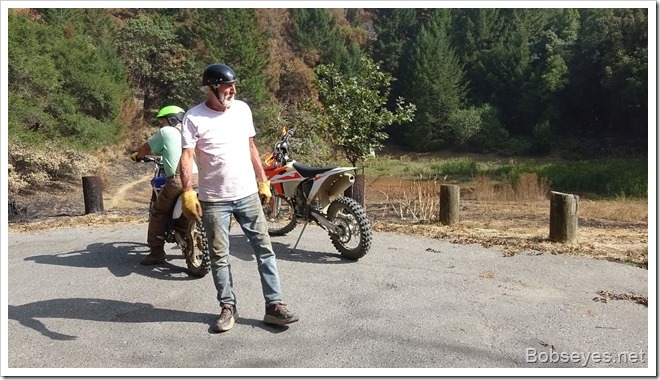 Tom hadn’t been as many places as Barry and I so we took him to some of the spots we rode to yesterday. This is a State communication tower up above Bull Frog Pond. 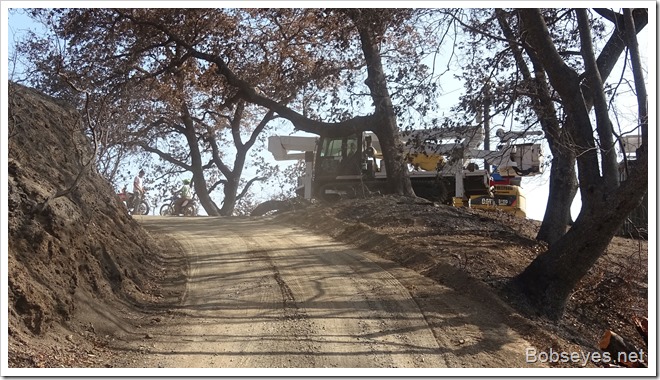 The fire burned right up to it and took the power out. Barry is checking out the pole as it was different than most poles. It appeared to be made out of fibber glass, likely so it didn’t interfere with the radio signals. 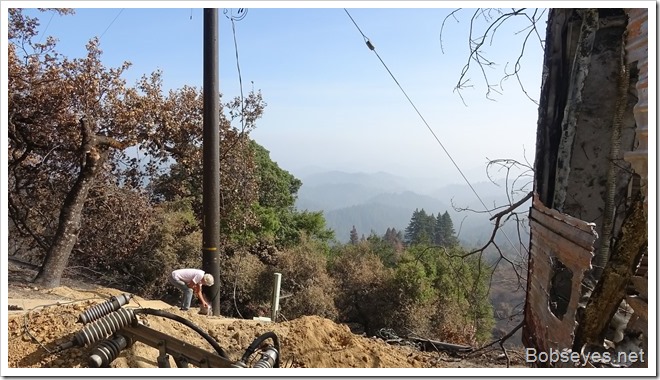 This area overlooks what they call Horse Heaven which burned pretty good. 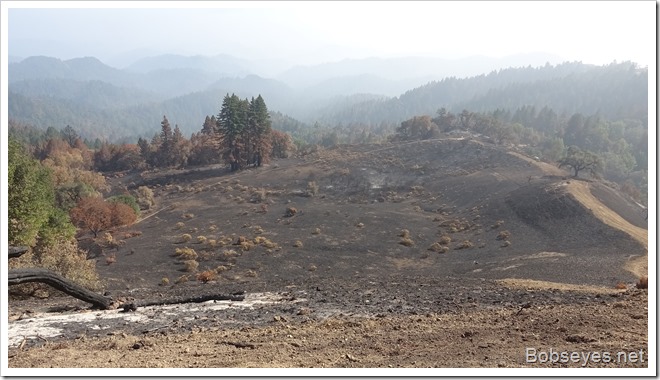 We rode around some fire roads then headed back towards Robert’s place when we ran into this smoke in this debrie pile. Tom tried to put it out but it was hot down deep in the dirt so Barry called the Cal fire rehab guy to report it. We did get it mostly out so put some green tape on it so the guys that were coming up that the rehab guy sent would find it. 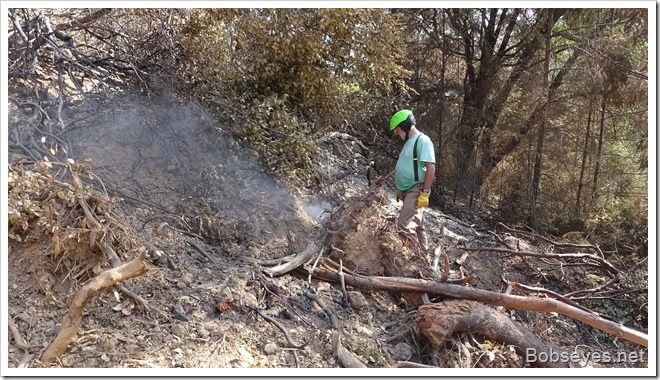 Then we continued our ride towards the Robert place stopping at a burned up house. 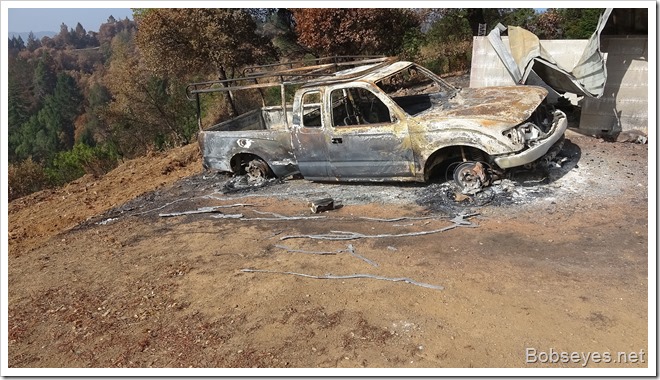 This was the house site where we stopped. 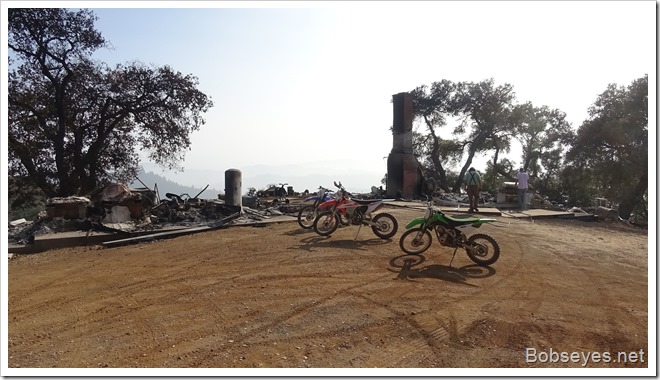 We rode on down to Robert’s place and talked with them for awhile and then headed for home.

I did a bit of chair hopping and some watering and that was it for me today.

(Visited 292 times, 1 visits today)
This entry was posted in Uncategorized and tagged 2020 forest fire walbridge mop up. Bookmark the permalink.