I heard Barry outside this morning with his dirt bike so I got up and got it going and joined him for a ride in the forest.

We took off and right away ran into a downed tree from the storm a week or so ago. If the trees were small enough we moved them off the road otherwise if they were bigger we jumped the bikes over them if they were small enough, or we turned around like at this one and will  have to come back with a chainsaw eventually. There’s enough roads that if we can’t get through one way we can usually turn around and get through on another road. 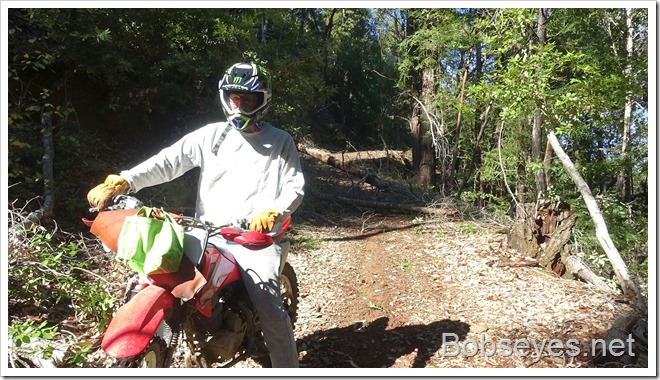 We rode on up to the main road and headed on out it until we got to the neighbors gate where we turned around and rode on back. 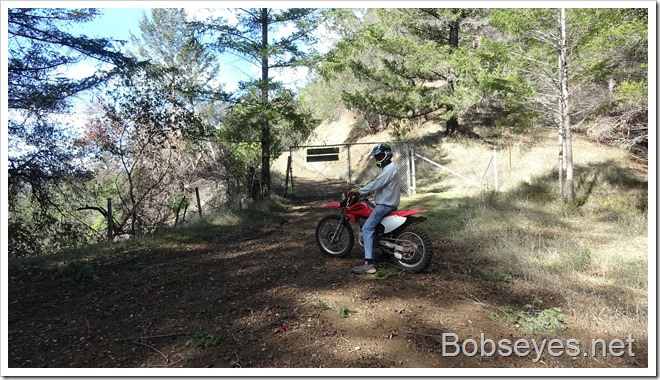 Since Barry was leading he got to throw most of the smaller logs off the road while I watched and took pictures. 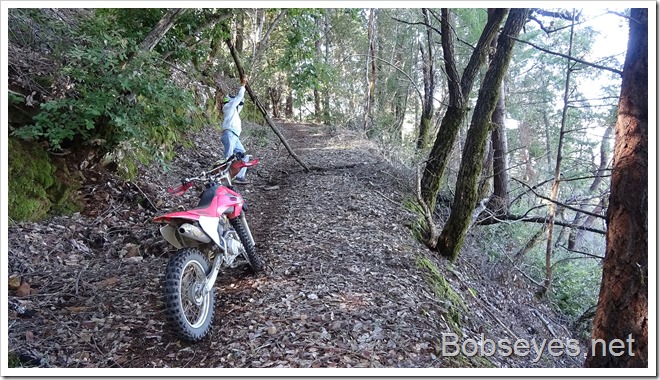 We were able to  make it to the Top of the World for a rest. 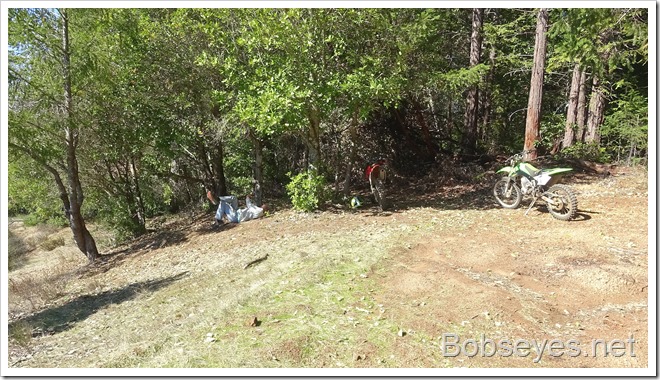 We noticed there were a lot of little red ants on the ground and in the leaves were we were resting. They were busy doing something and didn’t bother us too  much.

The view from that spot looking west towards the ocean which is just over those hill tops. 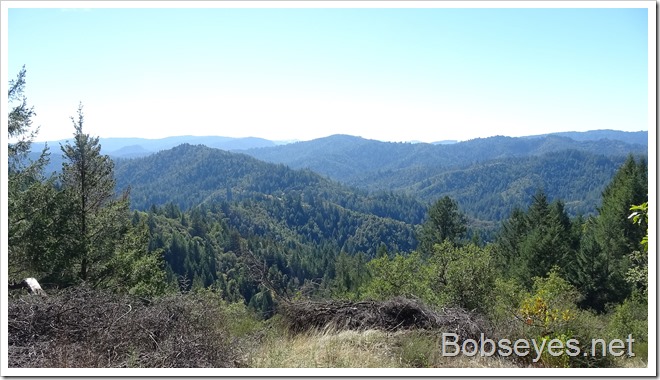 This was a pretty heavy one so Barry got it lower to the ground so we could run over it. 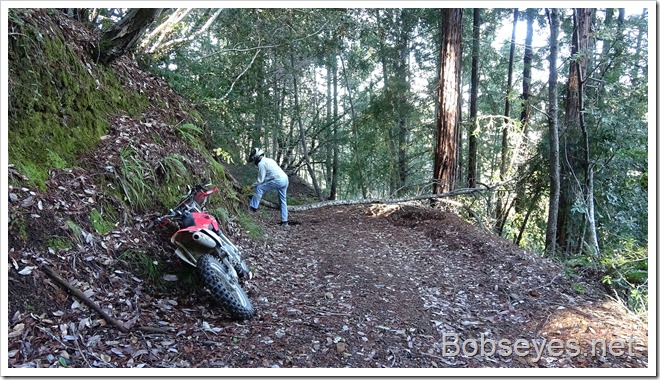 And this one was just too much stuff so we turned around and went another way.

We rode the other way and turned around at another neighbor’s after checking out the view from that spot. 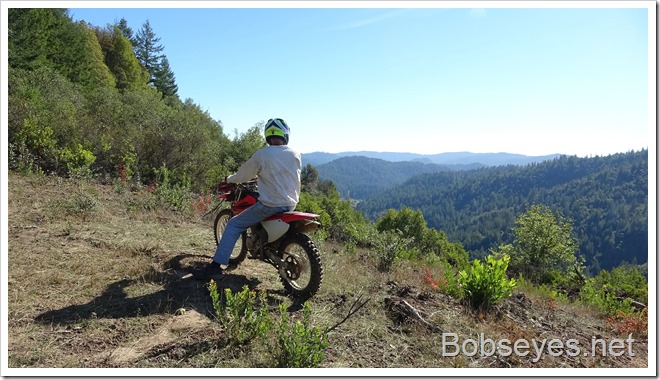 We headed towards home but still  had more road clearing to do. That storm was fairly windy and knocked a lot of stuff down. 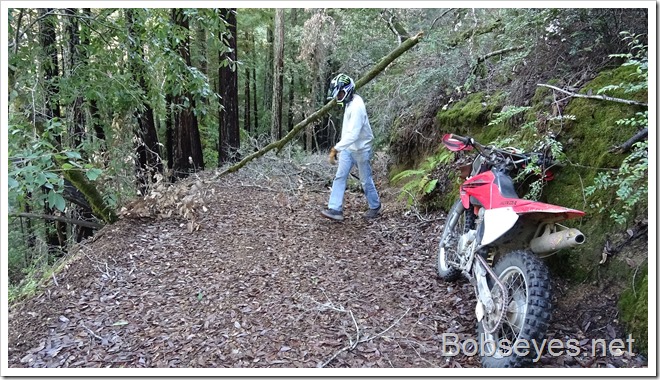 We made it back to  my house and Barry took off for home and I went in for a  nap as all that riding tired me out a bit.

I loaded up the wheelbarrow here and hauled it to the garden area about six times. 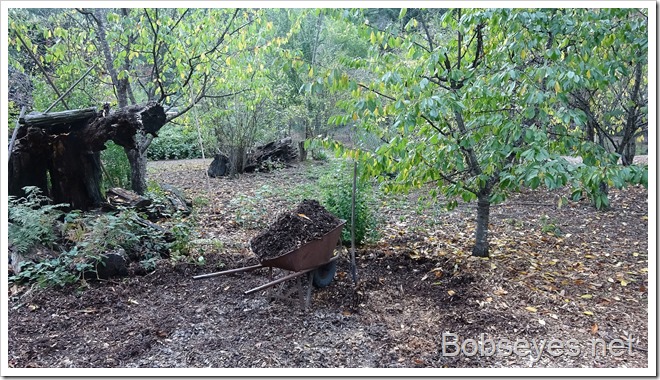 At sunset some clouds were coming in off the Pacific ocean like some rain is coming in, looking west. 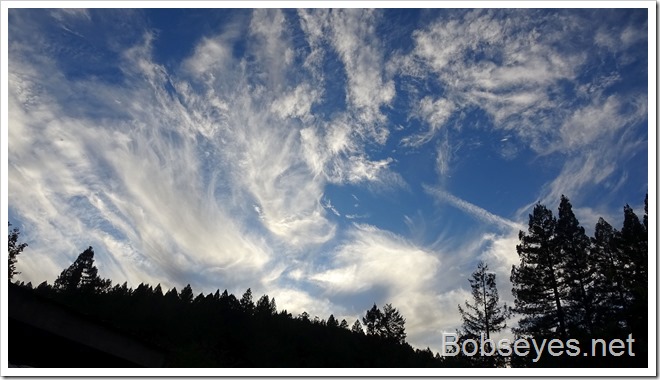 This looks like it is upside down but it’s not. It straight up in the air and those are some tall redwood tree tops you see. 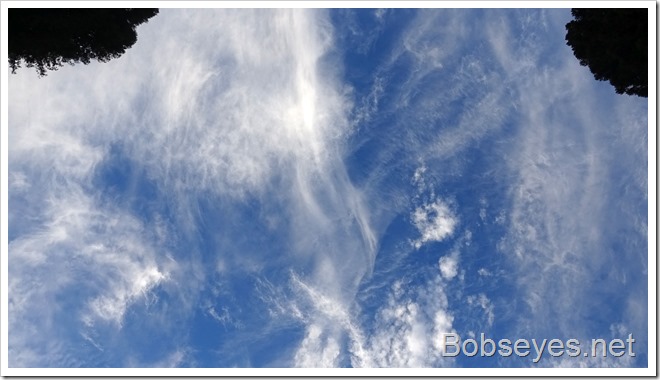 There was no red sky which means there are a bunch of clouds out over the ocean blocking the sun and maybe full of rain on the way in.

(Visited 103 times, 1 visits today)
This entry was posted in Uncategorized and tagged dirt bike ride in the forest, trees down. Bookmark the permalink.