Once I got it going today I did some chair hopping around the yard and took care of the chickens needs for the day.

Middle afternoon I hopped on the dirt bike to go check on what the dozer did up where I cleaned out the road as a fire break above  my house on the neighbors place. I wanted to see how bad the dozer guy opened up the road into the State Park as an open road would invite too  many park visitors to come down our way and get lost.

I rode up to the end of the original road and parked at the turn around  here. The road I wanted to check out is in back of the bike through the forest and it never was a road, just forest. 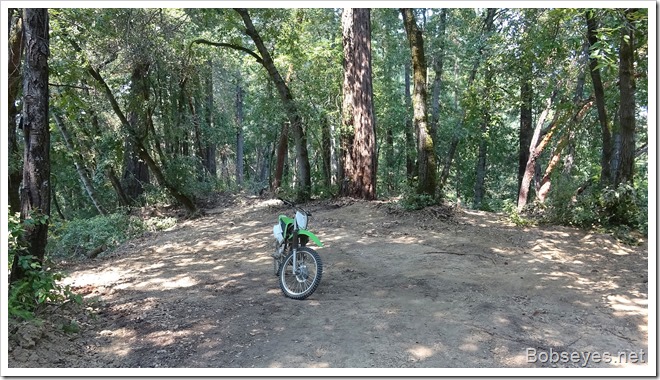 The dozer guy that was up here told me the State Park guys wouldn’t let him drop the blade in the dirt when he came through here to get to a burning ridge but he could knock down trees to get through the forest to where he needed to be to stop the forest fire from cresting the ridge and burning down into our area.

So things looked pretty good as there wasn’t much of a road as he just knocked enough trees out to get through and up to the ridge top. 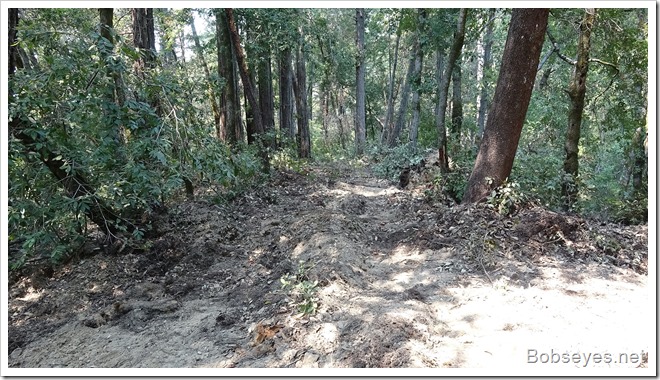 This will heal up and go back to forest fast. 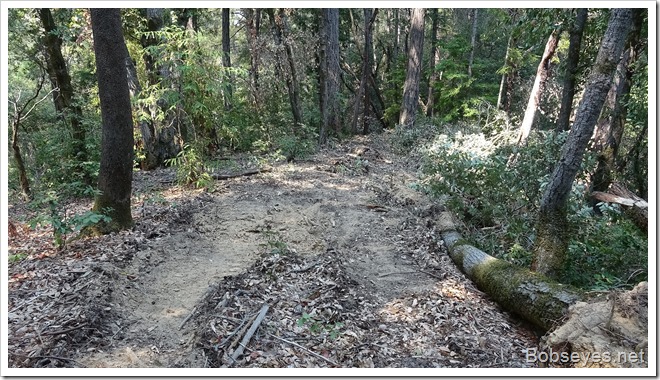 It’ll be hard to tell where he went through this open area soon as he didn’t mess it up much which is good as it won’t attract hikers down through here and into our place. 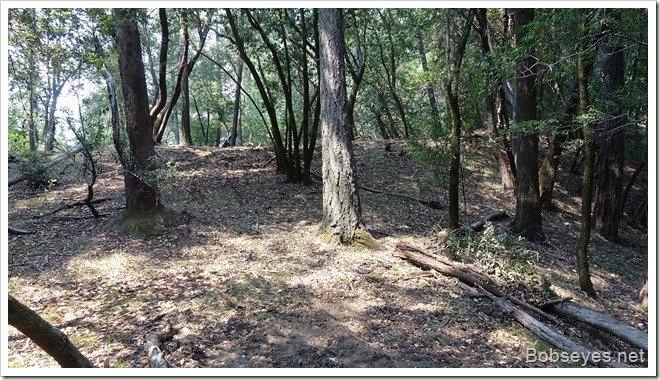 Checking the fire area west and up in the hills

I rode on home and headed for the hills west of me to check things out and I wanted to visit a neighbor to chat.

Ripping along on the dirt bike

The road on the ridge was real bumpy and dusty when they first got up  here but they’ve improved it a lot with the dozers and were finally able to get some water onto the road then they have the water trucks go back and forth to pack it in and it’s a nice road to rip on the dirt bike. 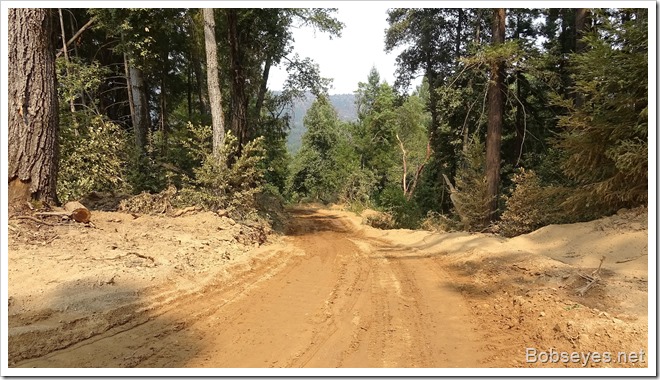 I headed up to the turn around place where I ran into these guys supporting fire mop up guys down in the canyon behind them. 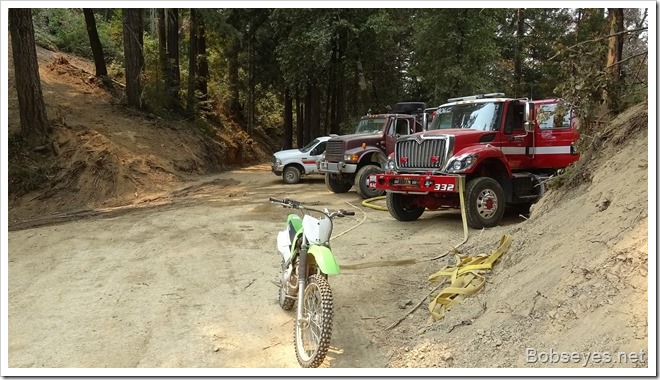 Another view of the spot. I talked with the two fire guys on the right for a bit before continuing up the road towards some neighbors. 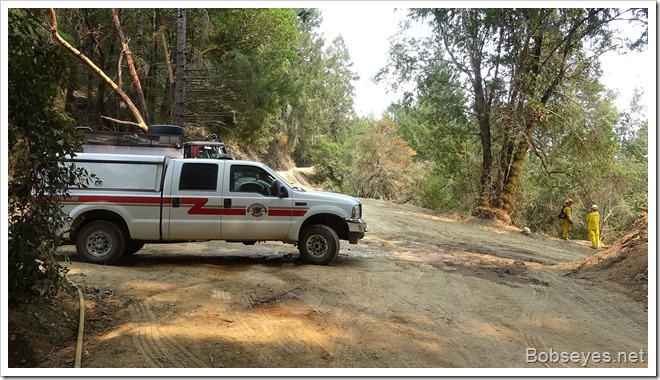 This is the road I was on to get to the neighbors where there were some fire trucks parked along it to watch for any possible flare ups. 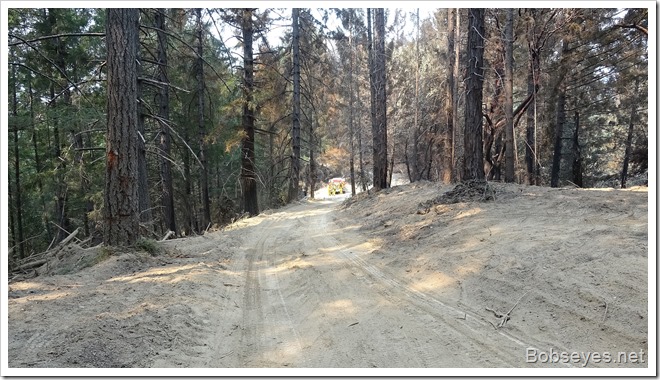 I stopped and talked with these guys. They asked me to check out the road ahead of them for any problem areas and I said I would and stop and report on my way back. 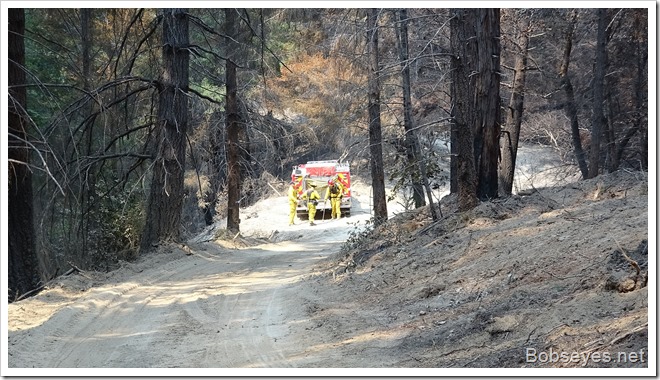 I rode on up to the neighbors where I could see this smoke down in the upper Hulbert Creek Canyon where there are some houses. 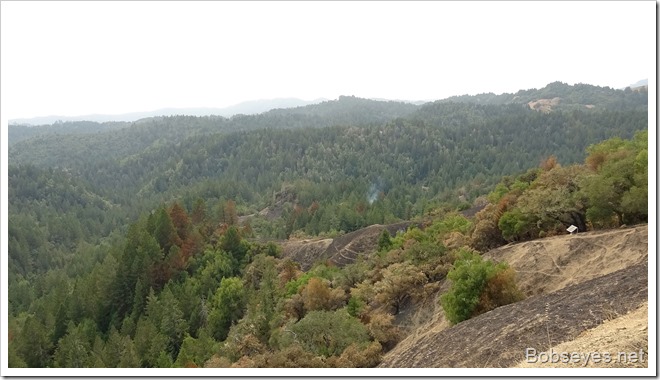 No one is home

Shortly I ran into a fire trucks near the neighbors and I asked the guy if he’d seen the flare up and he had but was trying to figure out how to get down there to deal with the fire. I told him how to get there and then I rode on to the neighbors place but the gate was closed and no one was home. I suspect they had to go out to stock up on supplies as they’ve been up here for a couple weeks fighting fire and protecting their home. Their dog was friendly so I gave him a pet and headed back down the road and stopped to let the guys know there were no hot spots along the road and I filled them in on the hot spot down below them.

Like I said they’d fixed up the main fire road so I could ride licity split and I did watching for any traffic but there’s very little now.

I didn’t run into any rigs until I got down to the Y where this guy was parked. I answered his questions about where the roads went and took off for home through our place. This guy was driving around the roads to pack the wetted surface down which was making the dirt roads real nice. 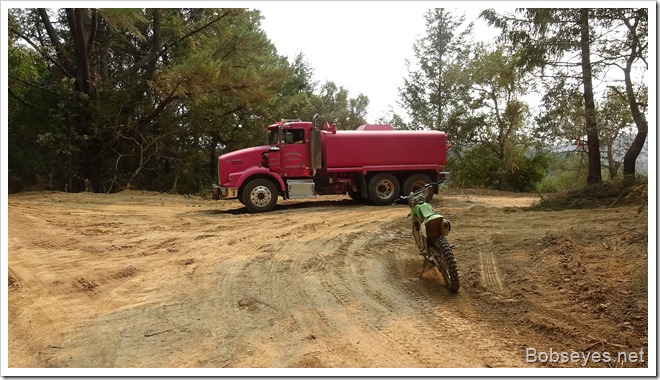 Fixed this crossing up

On the way down I stopped at this crossing a macerator machine messed up early on in the fire. He got stuck in the ditch and just piled up some of the rocks. 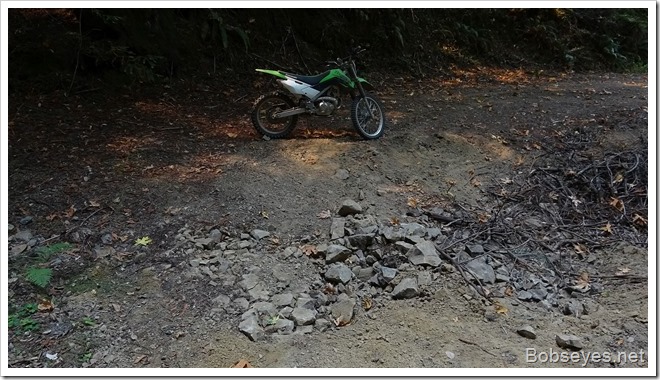 I spread out the rocks and kicked some dirt around with my feed and it was good to go for now. 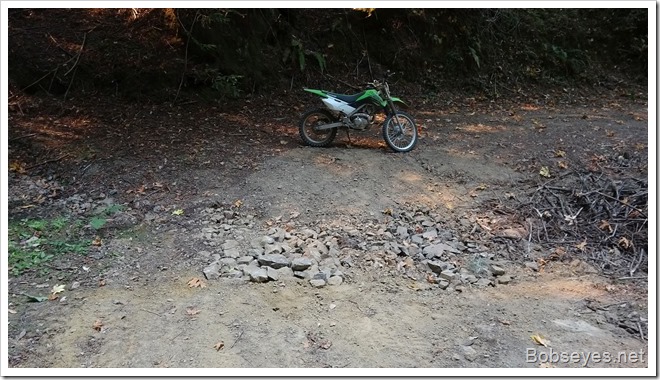 I rode on home and finished out the day chair hopping and enjoying the day.

I want to thank all the people commenting and emails that gave me a lot of well wishing’s and all, for being so positive. Much better than negativity. Thanks, I have a bunch of nice readers.

(Visited 234 times, 1 visits today)
This entry was posted in Uncategorized and tagged 2020 forest fire walbridge mop up. Bookmark the permalink.