Dirt Bike Ride and Talking History With a Neighbor

I saw my brother Barry out front today with his dirt bike. Looks like a dirt bike ride day. 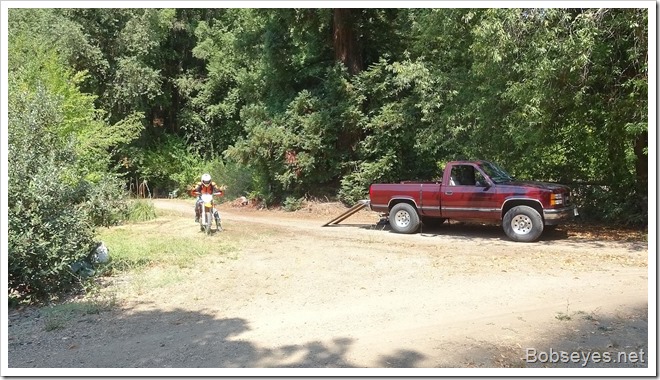 So I joined him and we rode up into the hills to the Guerneville overlook here. 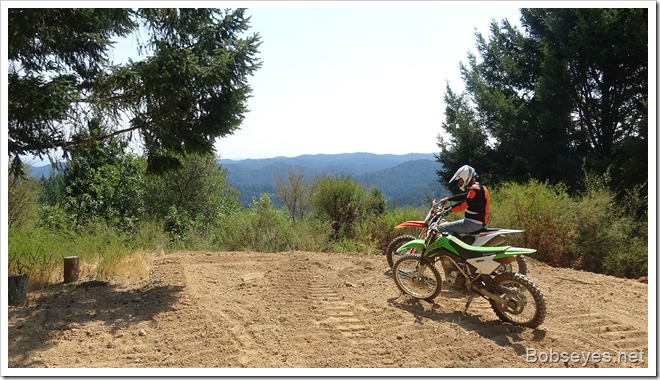 The town of Guerneville is down there. The forest fire didn’t get down there fortunately. 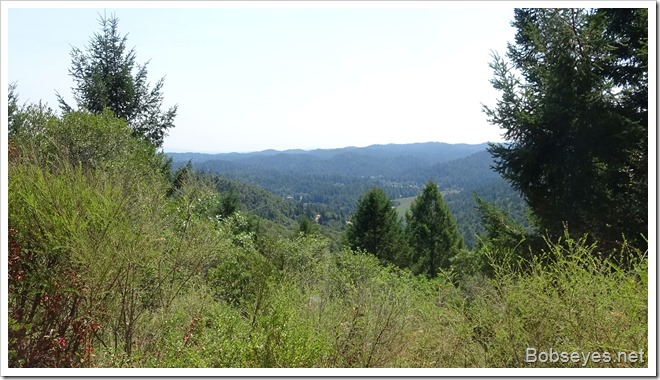 Barry wanted to go down to Hulbert creek so we headed down this road. 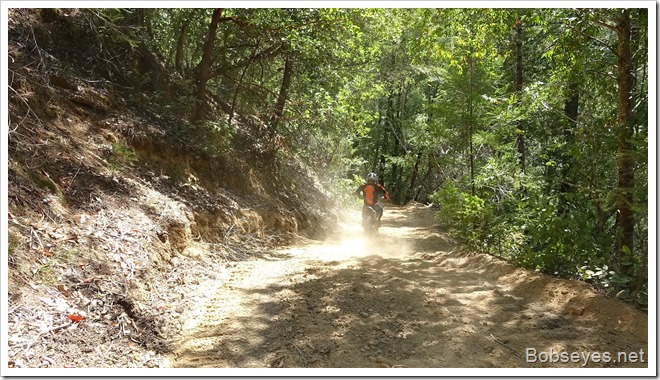 Then he wanted to take the dirt road down to Guernewood Park so off we went until we got to the first paved road where we talked with a lady where we turned around. The lady used to work in the State Park by my house.

Then I tried to find the Bush place. I think we found it but no one was home but the dog. When we shut the motors off the dog moved in and started biting Barry’s bike’s tire so I started the motor again to ward him off and that worked. Good dog doing his job.

Then we rode back up the road and came out here where Warren was parked serving water down that hose to some fire guys putting out spot fires down below.

Warren was a talker and really knew how to shoot the bull. 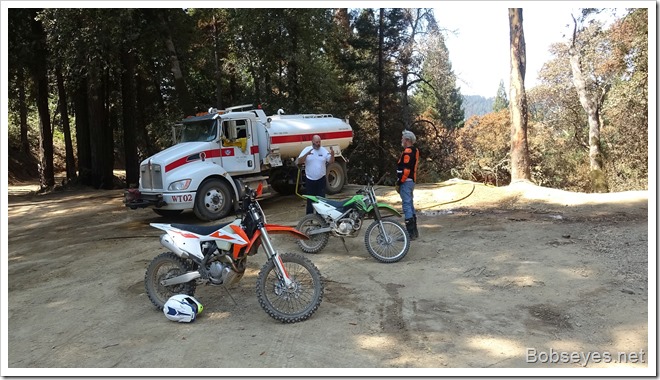 We were headed over to visit with Robert going by here were we could look down where the fire was. No smoke down there today. 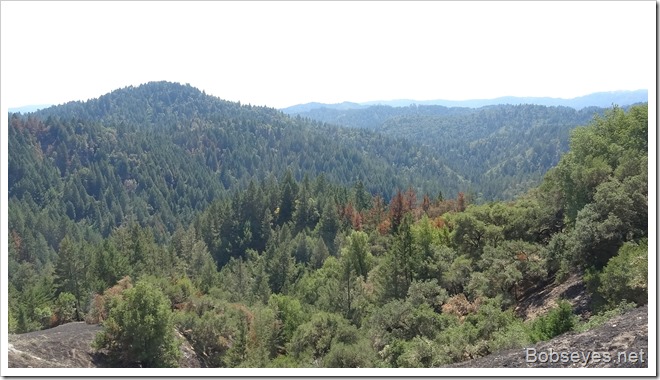 We rode up to Robert’s place but he wasn’t home, but his wife Laura and her two dogs were so we sat down for a nice visit. We talked about the fire and old history which brought back a lot of memories.

At some point she brought out an old picture of the Jack Lutrell meat market of old in downtown Guerneville. Guerneville was hopping in those days. Note how many people he has there working for him. Jack is the one on the right I believe. I knew him when he was a bit older when I was a kid. Also note the drinking fountain there which is interesting. Maybe to keep men from spitting their chew on the floor as lots of men chewed tobacco in those days. 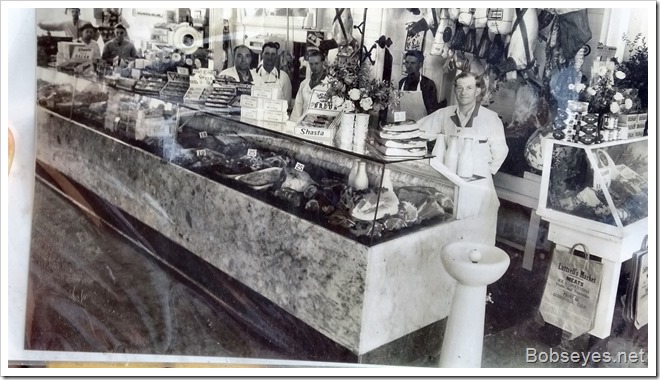 Now I’m not sure but his meat shop might have been in my grandpa’s grocery store which I have an old picture of I stole from somewhere. My grandpa was Birkhofer and this is in the place of where Lark’s drug store used to be. Interesting enough those ore wagons are likely my great granddad who lived in the house where I now live. He hauled ore from back in the Redslide country which is way back in the park at East Austin Creek where this big forest fire started. He was a teamster and owned all those horses and wagons and bought the best part of the Armstrong Ranch which is where I live. I think there’s some kind of parade going on. teamsters in those days were drivers of animals and wagons as there were no tractors or trucks yet.

You see what I see which means you rarely see me.

While I was looking for that pic I came across this one of me. 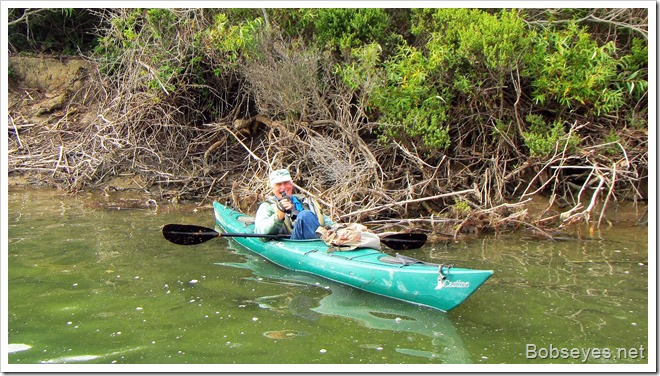 While we were there talking with Laura this fire truck pulled in just to check in as they were working on putting out spot fires that start up. The boss knew me so we had a chat. These guys were here when the fire came through so everyone was real friendly. 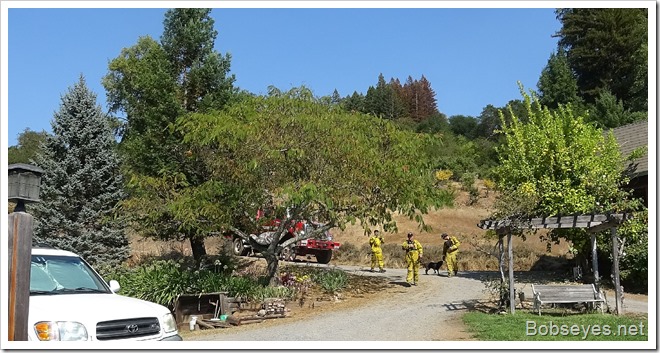 Eventually we left and headed back down the fire road. 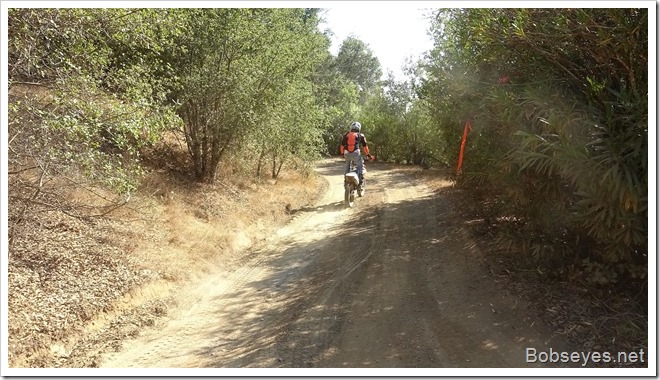 Mop up stuff and a chat with Jim

On the way we passed by a smoky spot that was still smoldering.

When we got to here there was a black dog and then Jim came out of the woods which I’d run into during the fire and we had a good chat when the same fire truck up at the house pulled in. I told him about the smoke he just went by. It’s easier to smell smoke on the dirt bike than in a fire truck. They said they’d check it out on the way back from where they were headed. 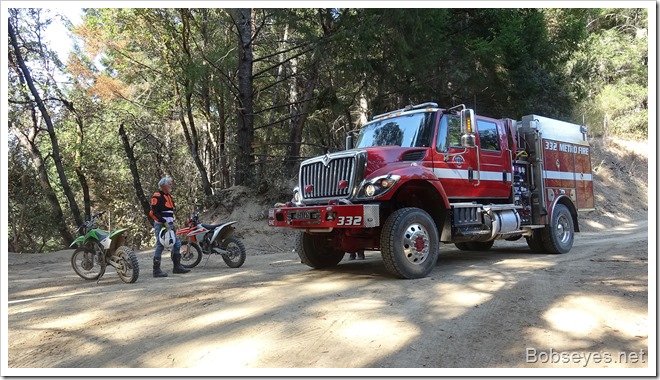 From there Barry and I raced down the hill back to my house and Barry took off for home and I had a bit of a nap.

I sit in the chicken pen a lot and this little chicken likes to come up for  a sit. She’s my only real friendly one and gets under my feet a lot and I have to be careful not to step on her. 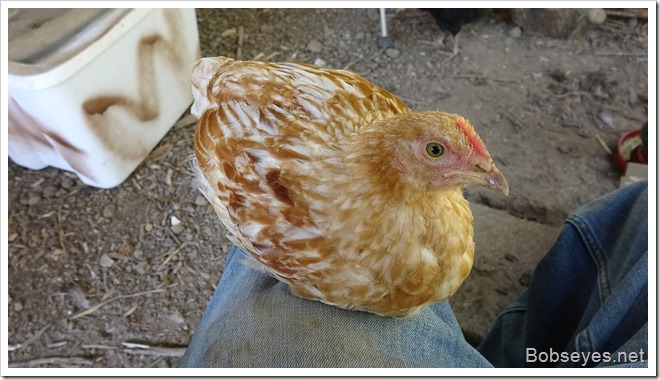 I like having the chickens running around the yard as I chair hop. 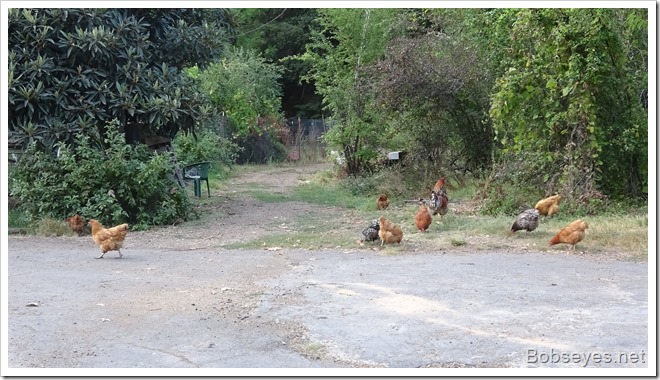 Here’s my rooster Carmelo. He’s a good rooster that is fairly friendly and doesn’t cause a lot of trouble. 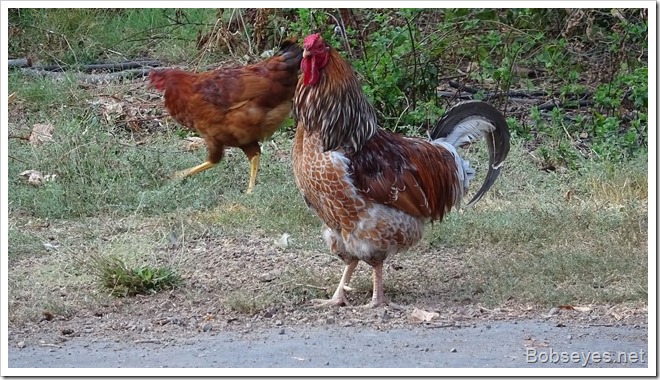 The grape plant I planted on the side of the chicken pen looks real good there. I’ve been eating a lot of nice grapes off the plant for the last couple of weeks that were real good. 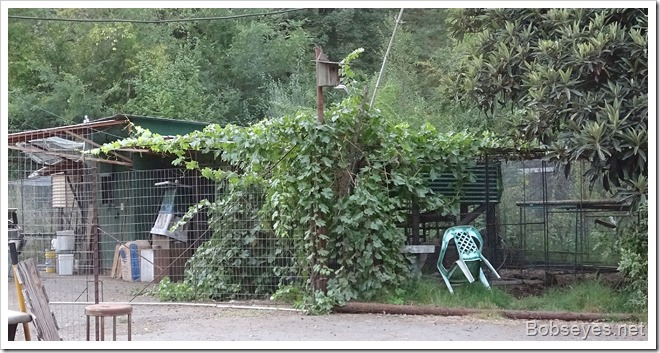 I chair hopped and sat around the yard until the day started to chill down when I went in for the night.