Barry shows up for a dirt bike ride

I was headed out to feed the chickens this morning when I heard Barry in the blueberry patch. He had his dirt bike in his truck so we were going for a ride up in the forest. 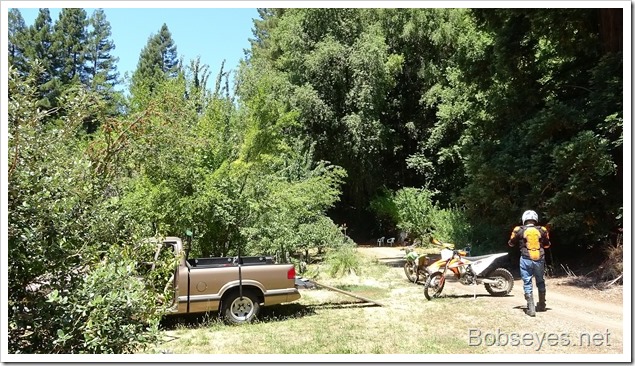 We rode up in the hills all over the place. 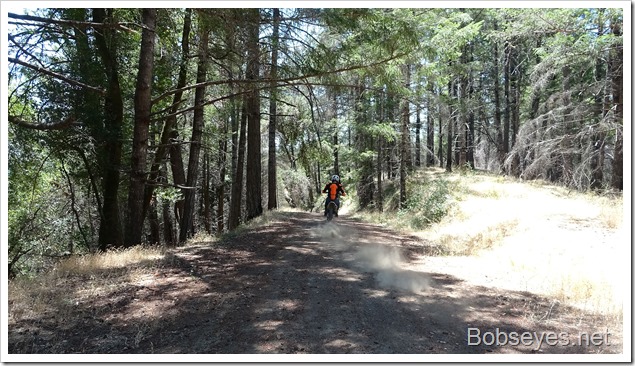 Eventually we ended up at my cousin’s place who lives up on the top of a hill at this spot. 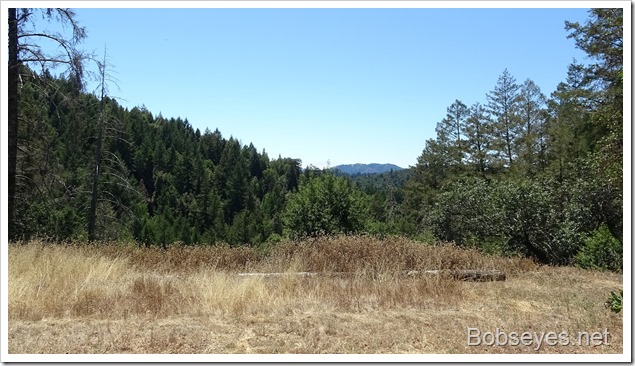 We shot the bull for an hour or so, then went up to the Top of the World with this view. Fog seems to be creeping over the hill tops from the ocean . 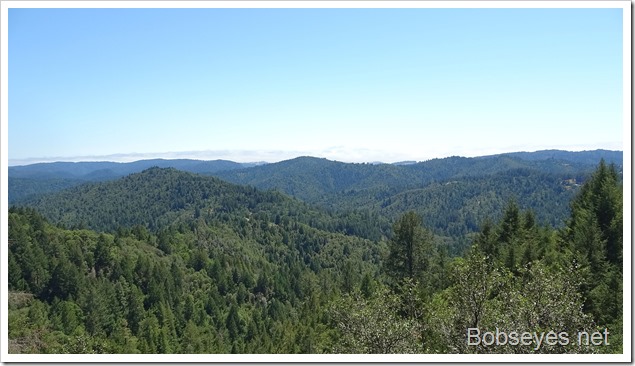 That fog is over the ocean and trying to sneak in a bit. It usually waits until night time to sneak in, in the dark. 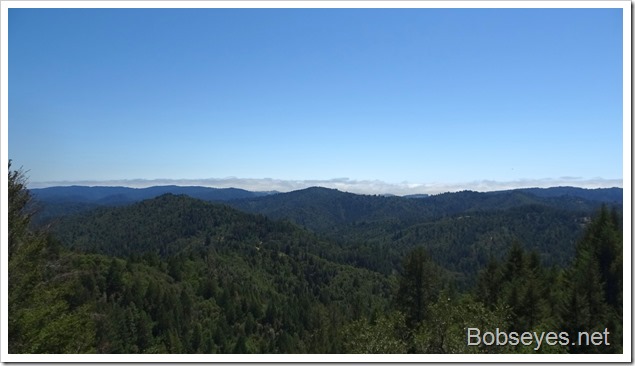 Barry enjoys his hammock which helps keep him here longer for a nice break. 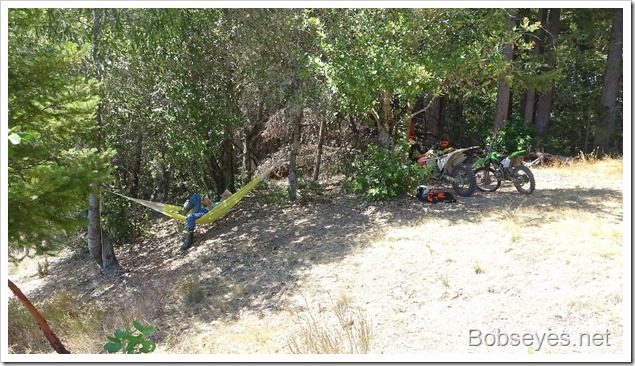 After a good break in this spot we hopped back on the dirt bikes and rode around some more. 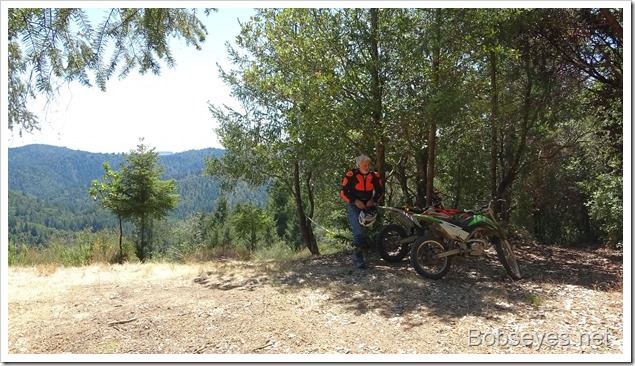 We stopped here at the spring for a drink of water. 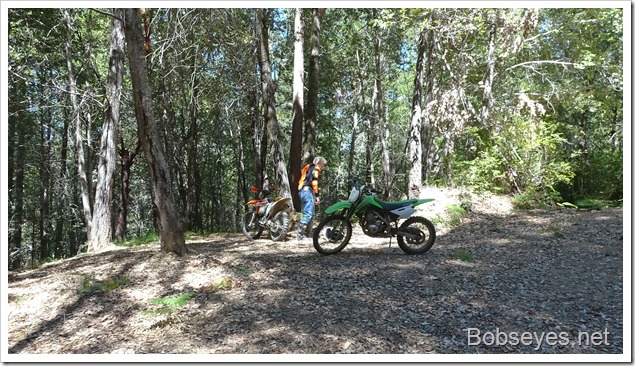 On the way home we stopped at Tom’s garden for a few veggies. 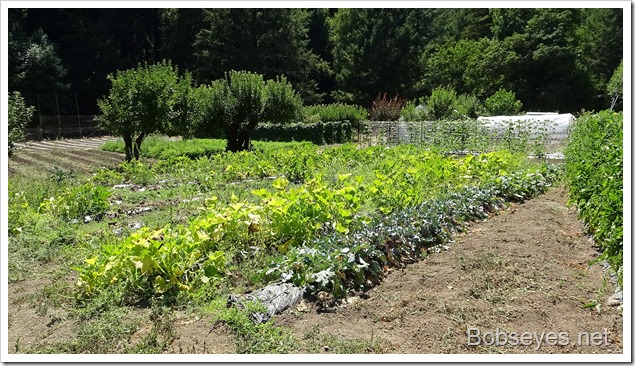 I picked another one of these things, only in purple this time. I’ve already forgotten how to spell it’s name. :O) 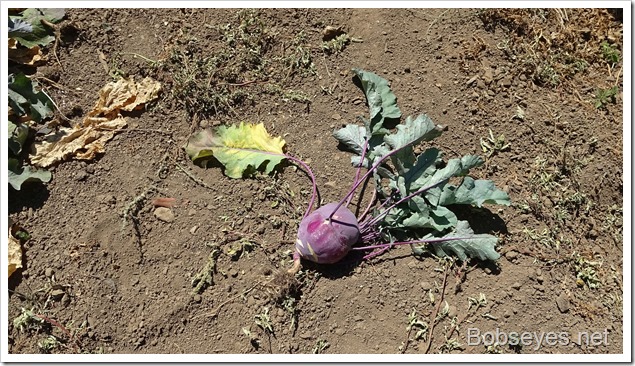 From there we headed on back to  my house and my brother Tom came by and joined us in a bull session for a spell, then Barry headed on  home to his place and I did some fertilizing and watering for the rest of the day.

Comment:
Is that a lovely silver something chicken in the header photo? WAIT! It’s gone. Looked like a tureen or something. And a head-on view of a pecking chicken made of metal. It as great. Where did it go? I’ll go back to yesterday.

I think I know what you are seeing and I’ll see if I can get some photos together and answer your question. I have over a hundred header photos that are served up randomly each time you visit my site.

Looked like a piece of dinner serving ware, or something…made of silver, which the view of resembled a chicken to me. Well, never mind. It was not an actual chicken.  If you’ve got more than a hundred photos on the circuit, you probably don’t even remember it. Ha. I will just have to live with my curiosity. As usual.

I think it was this thing

This is likely what she saw. It’s a sea urchin dish I made out of sea urchins and is cast in silver. The urchin’s have a beak that has five teeth in it. The top knob is the beak with five teeth and the five feet are each of one of the five teeth. It’s really made of two sea urchin shells, one slightly larger than the other. It’s made using the lost wax process. 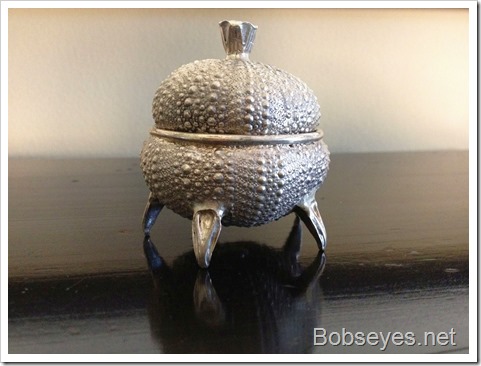 I started casting in bronze first but decided as long as I had to do all the same work I should do it in silver so I switched to that.

Here’s some of the stuff I made. The big crabs are about 5 inches across and they are solid silver. There is one bronze dish, the open one and one bronze crab on the right. 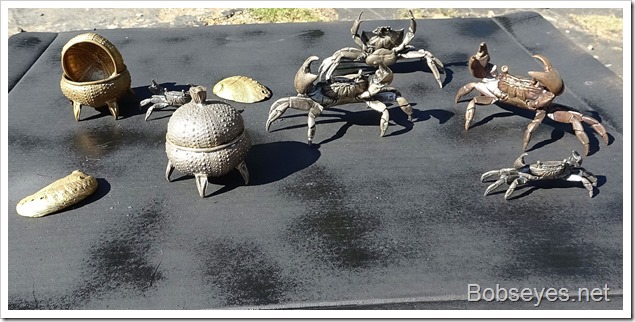 You can see the detail in the inside of the dish of the urchin shell. 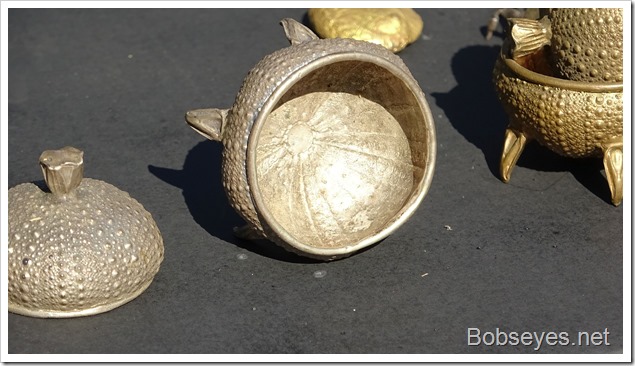 Another view of things. 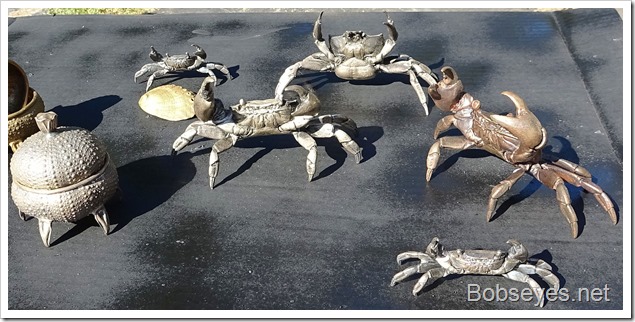 And a little closer shot of the crabs. 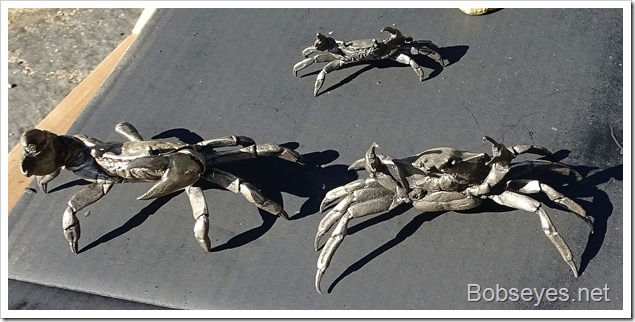 I did sell some of the objects but eventually decided against making any more as the process to make them took a long time and I didn’t figure I could make much at it.

At that time I looked at all the things I could do for a living and decided that the thing that I could make the most money for the least amount of work was doing electrical work so I did that just enough to get by until I reached retirement age.

That’s the story on the chicken looking things and I could see how Judith could see a chicken in there from only seeing the dish briefly.

Felt better just giving them away

Oh and after stopping selling the stuff, I enjoyed giving them away more. I sold a number of crabs but no one would pay for the expensive dish. It’s two parts so needed twice the money for a sale. I’ve given two of the dishes away to two special people I know.