I heard something out on the road early last night. It was this D8 dozer being loaded and moved to another hot spot east of here. He’s start off in the morning making more fire breaks. 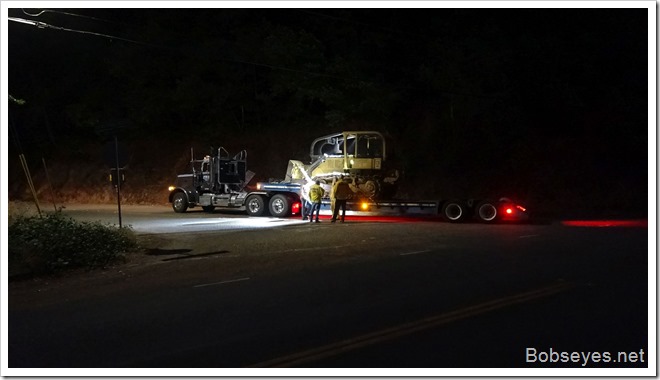 I didn’t sleep too good last night, just too wand up.

My brother left last night to stay with another brother so I had to go over and feed his chickens by his garden. 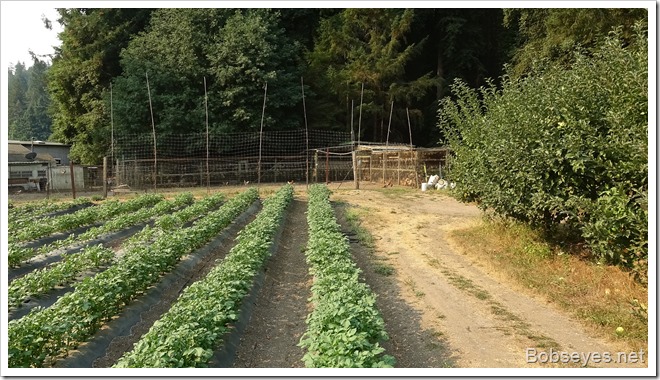 He’s got several hundred of them and boy were they hungry.

Here’s some of them diving in. 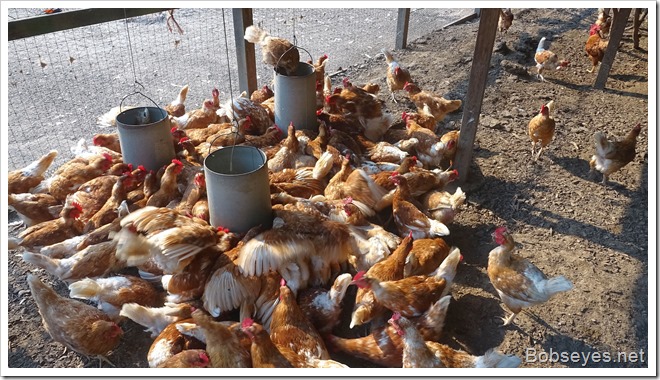 Hopped on  the dirt bike for a look see

Since I didn’t sleep well I tried to nap some but didn’t do too good so eventually I decided to hop back on the dirt bike and go check things out.

I road up to this spot but couldn’t get a real good view of what was burning. 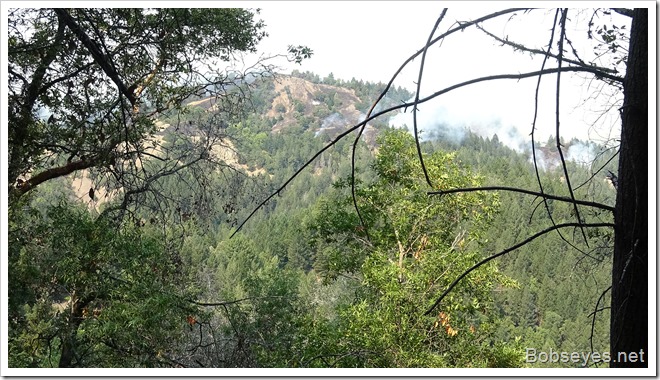 Armstrong park has not burned down

So I decided to get a lot closer. I could see this smoke which burned down to here late last night after I left. I’m wanting to go up to that peak which they call Devils Slide and we call Bald Mountain. I haven’t been to that top for about 50 years. I tried to find it yesterday but got lost and never did find it. But this morning I checked on Google Earth maps and found all the roads I needed to take to get up there. By the way that smoke is as close as the fire has gotten into Armstrong state park so far and it’s not in the big trees as reported. 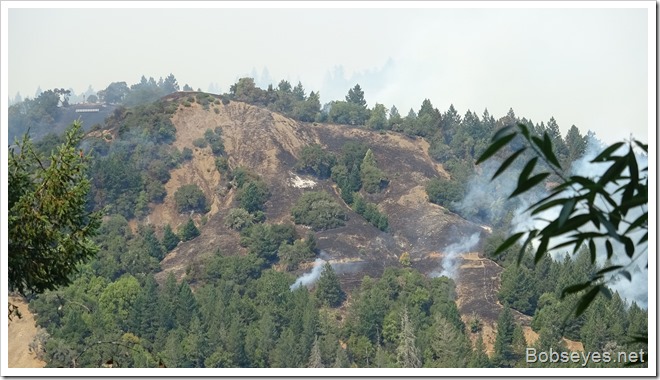 Riding up the fire break

I ran into John a neighbor riding around on his quad so  he joined me and I led him around and up this road that the fire burned down to last night. The fire break held here. 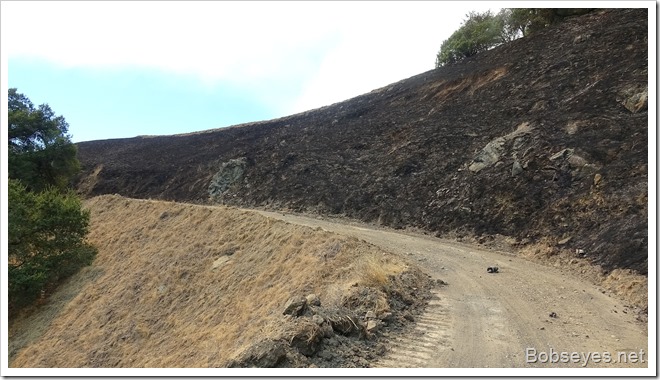 We shortly ran into some of my neighbors that live up here. They were putting out spot fires along the road and working to protect their houses up here as there weren’t any fire guys up here to  help out last night. We shot the bull for a bit and exchanged info on the fire. 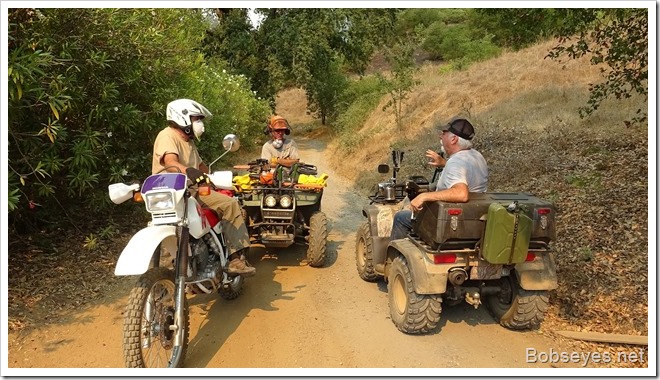 Headed to the to of bold Mountain

I told them I wanted to get to the top of Bald Mountain and that is where we headed on up this road where the fie burned last night. 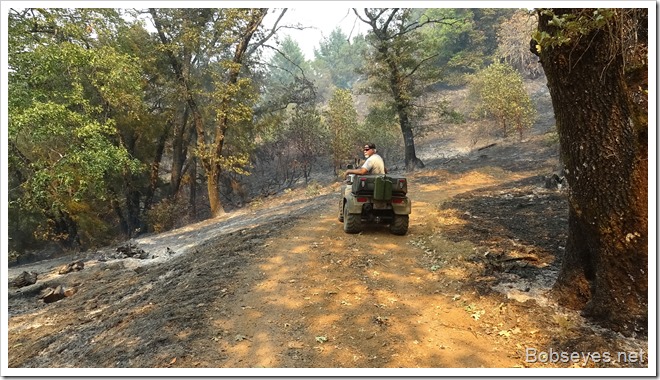 We ran along this ridge top road heading to the top. 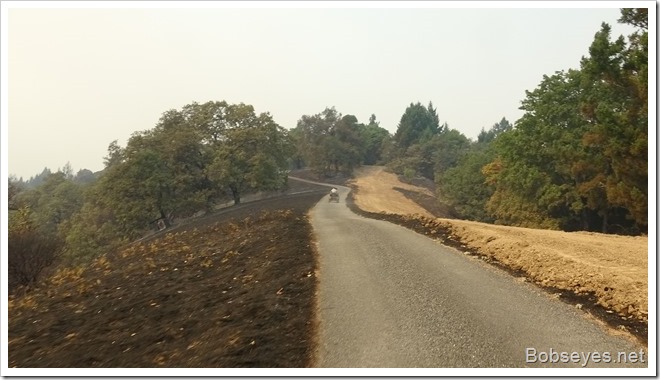 We missed the road but that was ok as I wanted to check the ranch entrance road anyway as that’s where I saw the fire burning yesterday and decided to head up the dozer road in the center as I wasn’t sure where it went to. 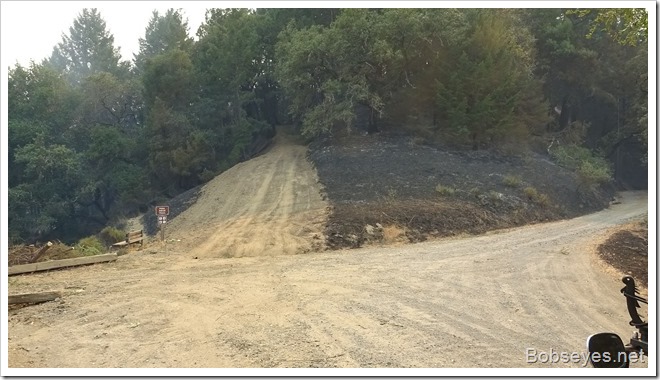 Neighbors couldn’t save this house

It went to this big house on the ridge top that burned last night. We ran into some of the neighbor guys up there. They said they tried to save this house last night but the wind was too strong to do much with what they had. 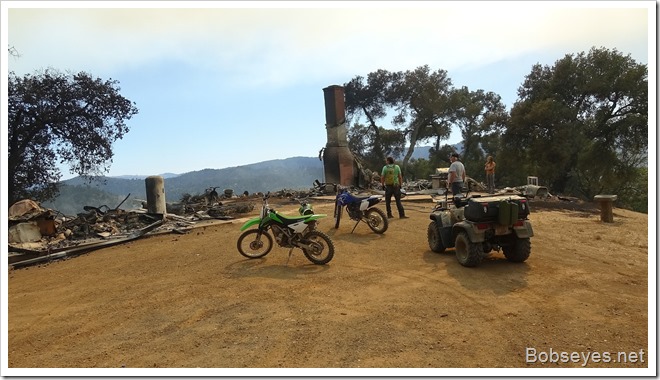 From the burned house we could see the Bald Mountain ridge top there across from the fire break and that’s where I wanted to go so off we went. 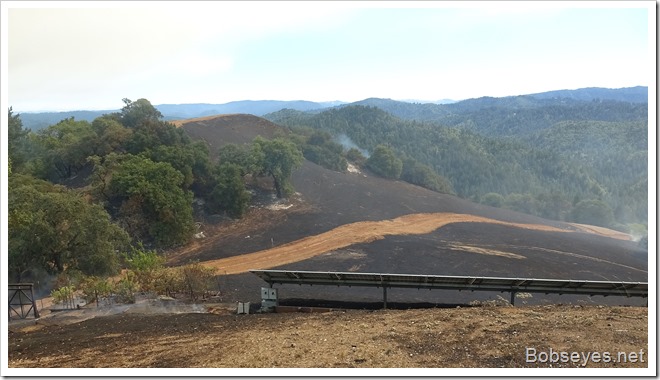 We made it up to the ridge top without too  much trouble.

Now I’ve heard the news media has reported that Armstrong state park has burned but bull. This shows the closest the fire has been to the park which is down below the smoke on the right.  As we watched this hot spot got more smoky and needed some attention if it was to stay out of the park but nothing we could do. The thing you can see in the upper center left is Korbel winery and vineyards. 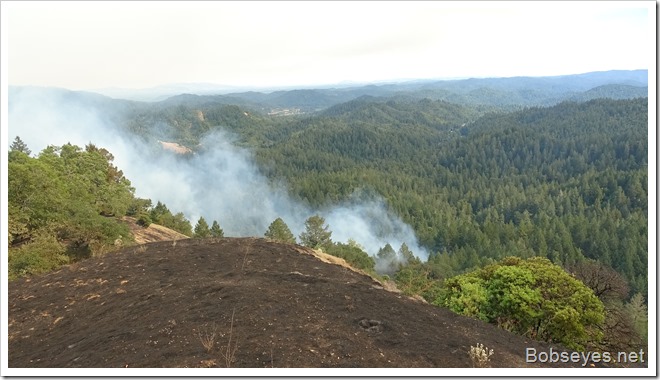 Korbel winery in the smoke

Tis is a closer look at the Korbel Winery place through the smoke. 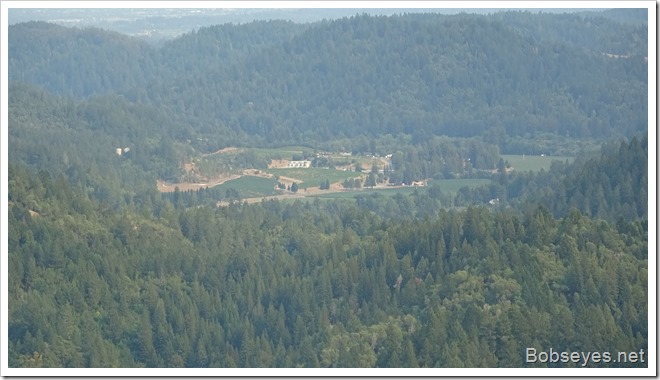 The fire to the west was heating up too and no fire guys in the area. 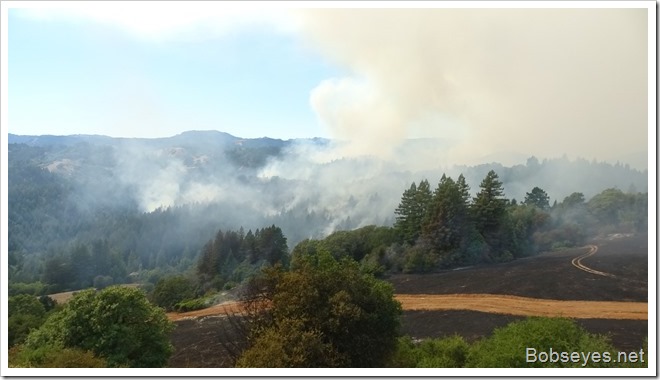 Behind us to the north the fire was also heating up with  the afternoon winds picking up. 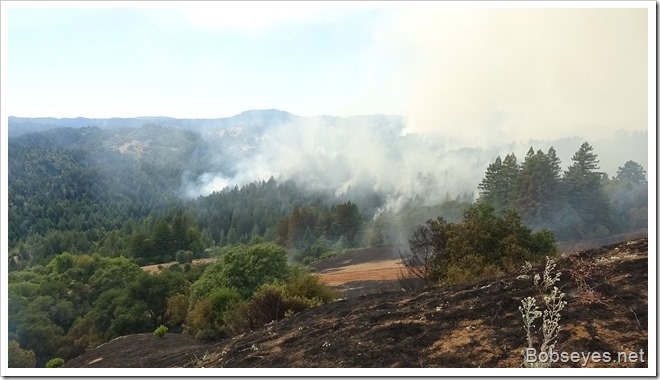 This is the same view looking out over Armstrong park and the smoke is picking up as we watched. 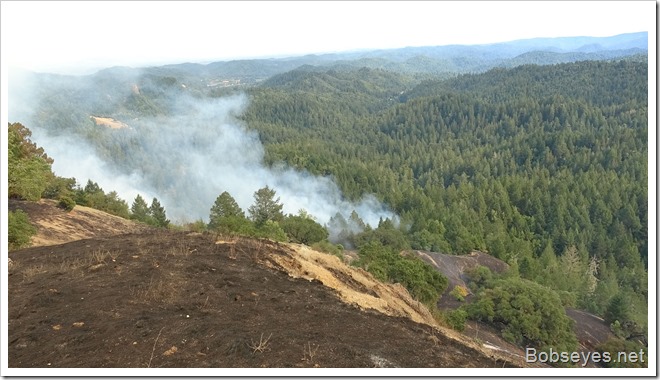 To the west the smoke plume was getting even bigger. 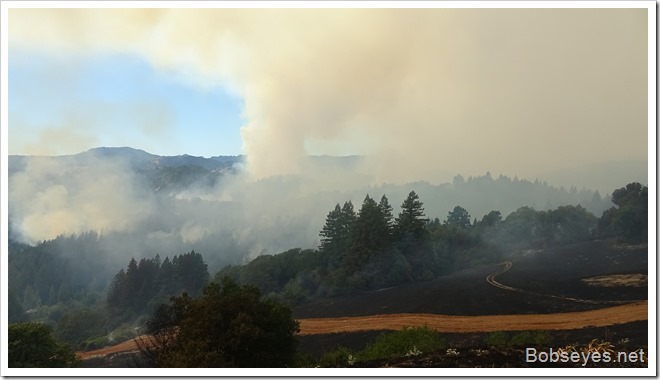 As it was I wished I had stayed on the ridge top for about another half hour and we would of gotten some really good chopper action, but not knowing that we started back down but ran into our neighbors that own the property again. Last night fire had burned a hole in their houses water line so they were working to repair it as they’d need the water tonight as the fire moved in by their houses more. They were having a good time with it and and just doing what ever needed to be done on the fire and to save their property as much as possible. 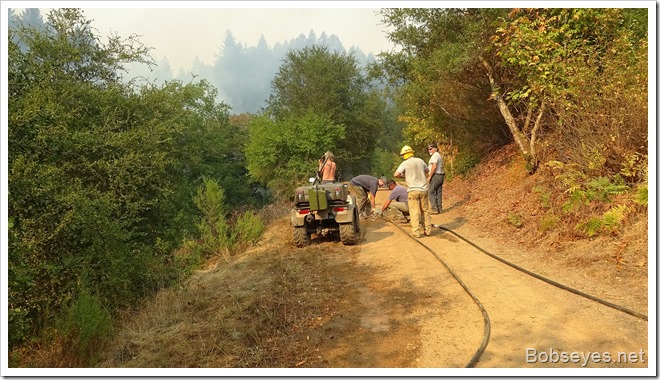 Headed home down through the park

John and I started back when I said I’m going to ride the dirt bike down into the park to get some photos to show people the park is still there.

Something I Wouldn’t normally do

I rode right over to the Armstrong Tree and took a picture. See the tree still stands and is not burned down. It actually would take a lot to burn these guys down as they’ve been through quite a few fires in there two thousand year old lives and have a bunch of fire scars to prove it. 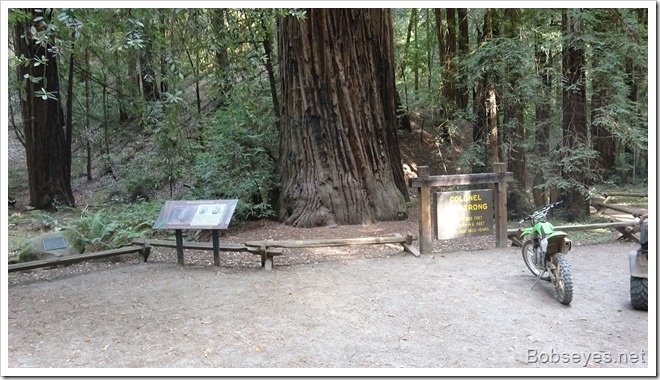 No fires in the park proper

And see the park is till there with tall standing trees. No fires in here.

And this big tree called the Parson Jones tree I think is standing tall. 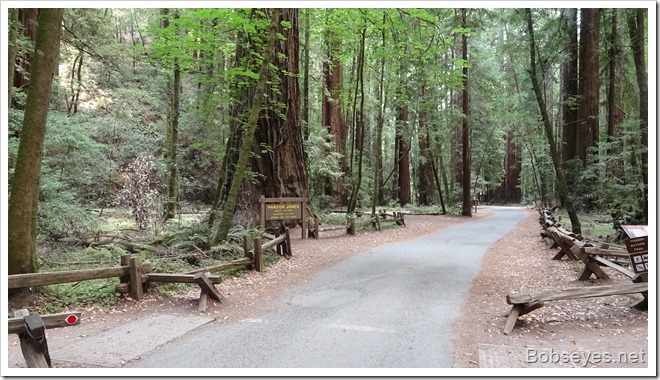 There wasn’t a sole in the park, totally evacuated.

The fire above the park could use some attention to keep the fire out of the park and this is what we heard and saw go over our head headed to the hot spot’s where we just were to take care of the hot spots before dark so I think they did what they needed to do to safe the  park. I listened to the Cal fire radio web ap and heard them working on the area with the chopper and some bull dozers  before dark. 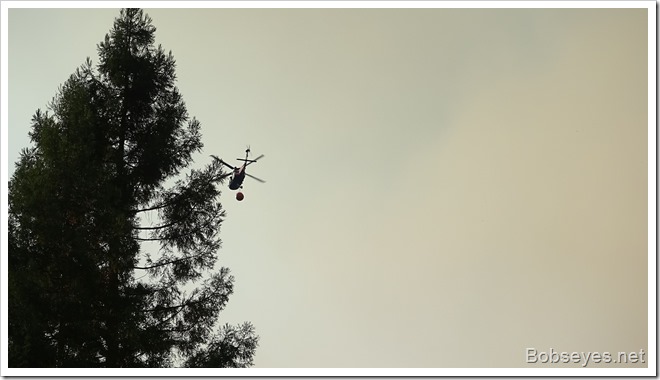 I had a nice day on the dirt bike riding around some neighbors places checking out the fire and doing some visiting with neighbors I never talk with. I have another place I want to check out tomorrow if all goes well and hope my brother Barry can join me if he can get by the road blocks to get to my place.

My brother Barry informed me that the fire had jumped the fire line to the Rio Nido area in the evening but I haven’t heard anything about that so they must have that under control, I hope.

The afternoon winds have been blowing past my place and up into the hills which is good for us, but not for all the many places north of here.

Nice day for us.

While writing this I was listening to the Cal fire guys on the radio ap and it appears they helped the neighbors tonight and are going to help them more tomorrow which would be good as they haven’t had much help.