Dirt Bike Crash and a Good Tumble Down the Hill

Barry showed up at my house around noon with his dirt bike so I joined him in a ride up into the hills.

We took off from here. 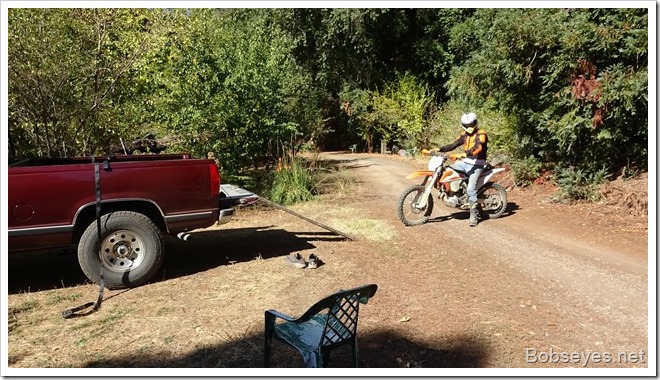 He had to make a phone call so we went up to the Guerneville overlook where his cell phone would work.

View of the Guerneville area. Looks a bit smoky down that way. 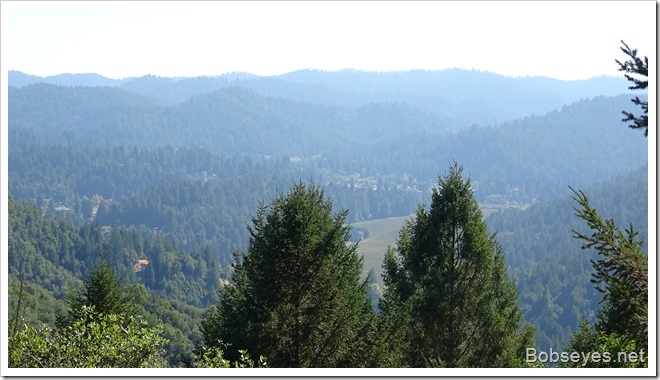 The lookout site where we stopped. 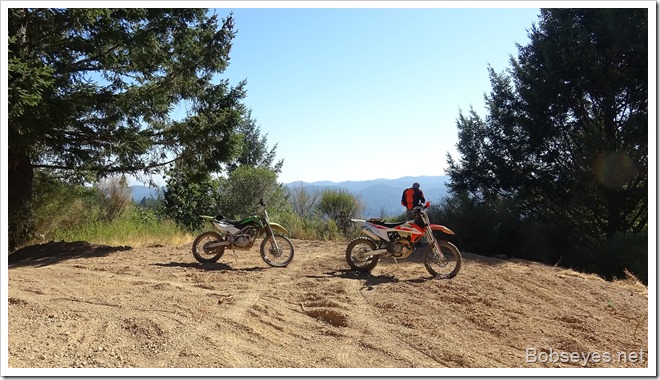 Once the phone call was made we took off and did some dirt bike riding. 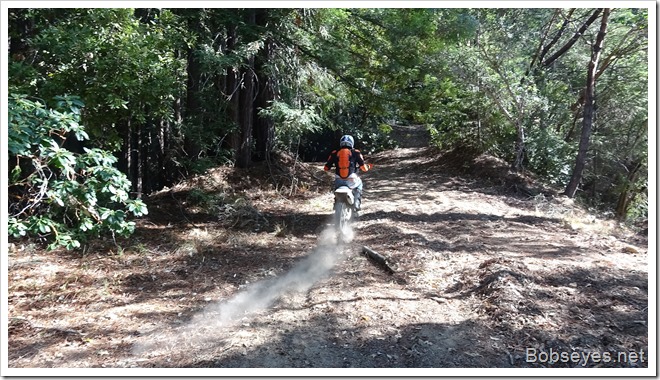 I was doing ok, until I didn’t make it up this long steep hill. I almost make it but had to shift into first and the bike spun out and went sideways which was ok, but that hill is much steeper than the camera shows. I was sideways on the hill holding the bike up but couldn’t keep it from falling over, almost on me. The bike stayed but I rolled down the steep hill 5 or 6 or 8 times rolling on my side instead of flipping over head for heals which was good. 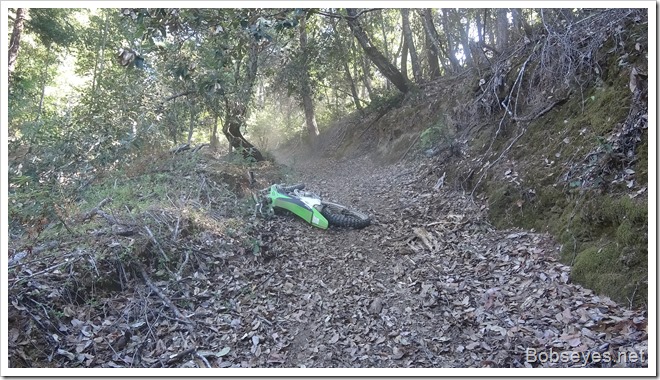 While rolling I thought should I spread eagle and try to stop or just roll with it until all the energy was out. I picked roll with it as there were no trees to run into and I came to a stop eventually.

This is the hill I rolled down which again is much steeper than the camera makes it look. 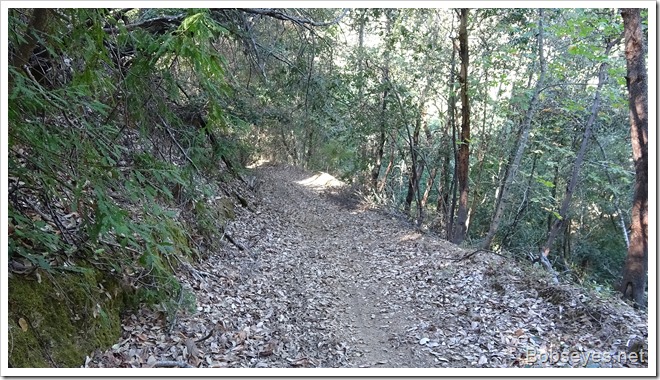 I got up and checked things out and all I had was some blood on my left elbow, no big deal, first blood of the day as I usually get some most days doing projects.

About that time Barry comes back and asks if I’m ok. Yes, I had a nice tumble.

I said I’m not going up that hill so we went back down it and rode off in other directions. Of course getting the dirt bike standing back up and headed down hill was a bit of a chore.

We ended up at the Top of the world for a good break.

Top of the World view. 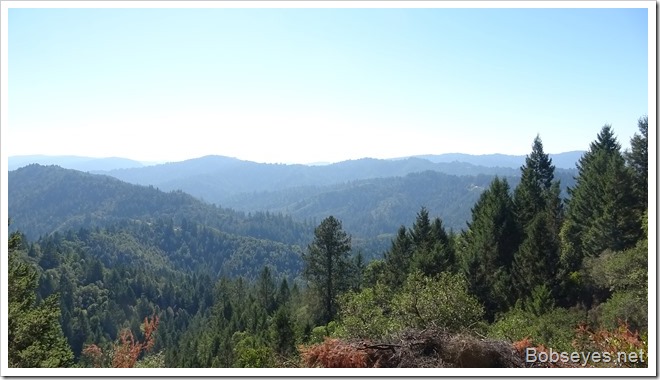 Resting up and enjoying the day at the Top of the World. 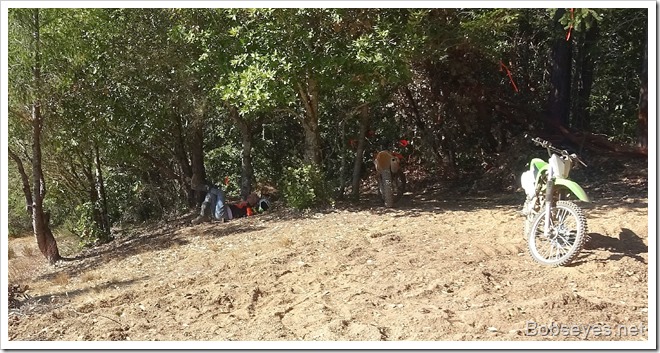 Once rested up we took off to do some more roads. In the process we got separated and spent a good amount of time riding around looking for each other which was some good riding before we ran into each other.

A short ride after that on the way home. Barry took off for home and I had a nice break.

I spent the rest of the day chair hopping and puttzing around the yard doing little projects here and there.

One of the projects that needed done was to repair this little chicken door that the bigger chickens had cracked trying to get through it.

I use these little doors in places I only want the smaller chickens to go so they have some space of their own from the larger chickens.

This is the repaired door. 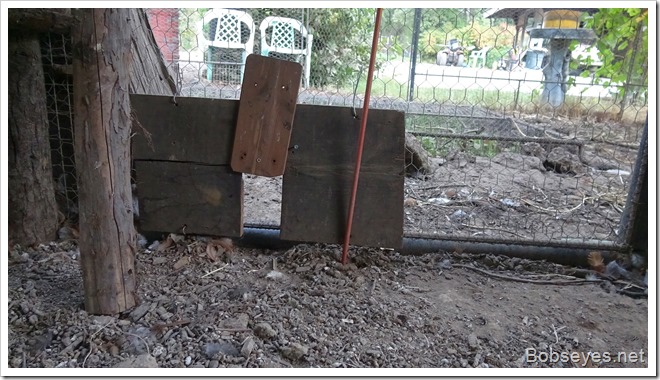 Tis is the back of the door showing my repairs to fix the crack. Just some boards screwed to the  door board to hold it together. 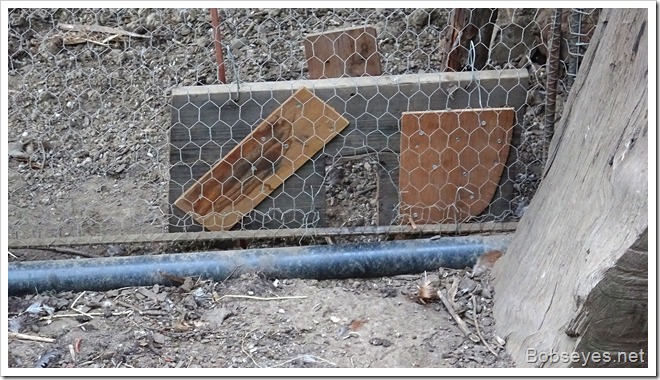 Towards evening it started to cool off so I came in the house and got the wood stove going to warm things up a bit.