No work, but a good motorcycle ride

My plan today was to do some work on my Toyota Landcruiser’s new gas tank.

But before I got out of bed I heard some motorcycles running out front.

Motorcycle’s  in the yard

I got up to see who it was and it was two of my brothers Mike and Barry.

Seems they wanted to do some maintenance on their motorcycles so I got it going and went out to supervise and watch the goings on. :O)

Adjusting what they call sag

They adjusted Mike’s bike ok and then they wanted to do Barry’s bike just to check it. They found the sag in Barry’s bike way off.

Have a problem get a bigger hammer

Barry wasn’t having much luck with his smaller hammer so I gave him a bigger one so he could be more forceful. 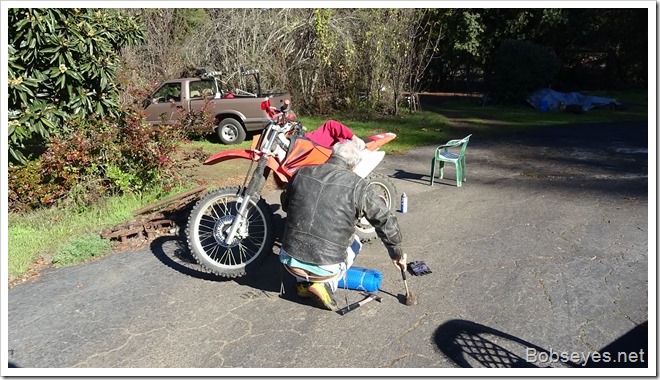 After some determination he finally got the nut loose so they could adjust the shock in the middle of the bike. 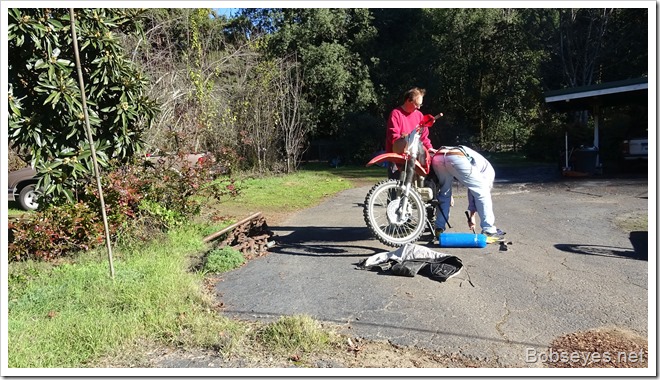 Some discussion about the specs

They were going back and forth on the specs so I mostly watched. Mike’s reading out the specs to Barry here. 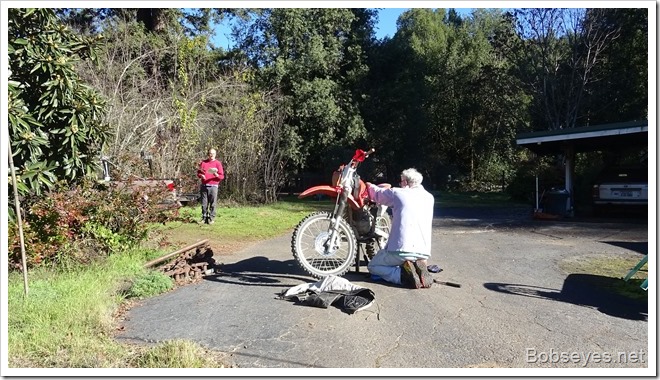 Once we got that done Barry wanted to go for a ride, but Mike didn’t want to, I think he was sore. So I said sure as long as you don’t go up any real steep stuff, stay on the roads. Barry’s been riding more than I lately so is way ahead on me as far as being confortable on the bikes.

So off we rode on up the hill with me leading and Barry’s bike just off my rear tire, scooting along. I was trying to move out a bit as I knew Barry would have a hard time going slow.

We made it to the top of the ridge overlooking Guerneville where we stopped for a picture.

Barry’s giving you the wave. 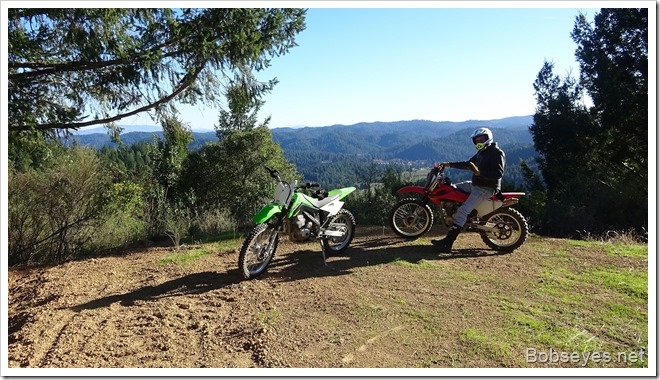 Steeper than I remembered

So Barry says how about we go down the backside and around the loop, which I remembered as being rather steep. I hadn’t been on that road for several years so I’d forgotten just how steep it was or I might not of tried it.

Will the bike make it

I led the way going down was easy, but once I started back up the hill, it got steeper and steeper and I was wondering if the bike would make it without spinning out or powering out, so I kept up my speed as much as possible and plowed on.

The bike had plenty of power and didn’t spin out, fortunately for me as I would have had to deal with a stopped bike on a steep hill.

Now in my younger days that wouldn’t of mattered much, but at this age, something like that would of caused me to stretch a bunch of muscles which would have been a bit hard on me.

As it was I stretched the muscles enough. I was thinking the bike was actually good for older bones as it did cause me to use muscles beyond what I normally do.

Barry goes for the steeper stuff, but not me

I led the way back down the hill back to the house. At the bottom Barry said he was going for a ride for a bit so I left him and went on home. Without me he could go up the really steep stuff, which was ok by me as I haven’t ridden the motorcycles enough to get to be real comfortable on them, yet.

Mike was waiting back home so I shot the bull with him until Barry returned.

Sun’s headed down and the day cools

The sun started to go behind the western mountains, the one we just rode up, so the day started to cool down fast.

They went on home and I went into the house and got the heat going and then put the coffee makings on the stove.

That was my day. I didn’t get done what I’d planned, but life is or should be more of enjoying oneself, so that’s what I did.

(Visited 160 times, 1 visits today)
This entry was posted in Uncategorized and tagged motorcycles. Bookmark the permalink.