Yep, dentist day today around noon. I just needed a cleaning. I usually have a fairly good time at the dentist because from over the years they know me pretty good so we all shoot the bull a lot. Maybe a bit too much as all the bull cuts into my cleaning time a bit, but I think it’s worth it as they take extra good care of me. The hygienist was a new one who originally came from the Russian area, Lithuania or something like that. Boy did I get some real history about that area. And boy she really worked over my teeth, lots of extra work on my calcium deposits.

When it got time to pay the receptionist said I bought into the yearly plan and was all paid up. I’d forgotten about that.

Then it was off to the feed store that had some feed I’d ordered. It turned out they had ordered the wrong stuff  or got sent the wrong stuff but it was chicken seed feed so I bought it as the chickens wouldn’t care much as long as they got fed.

From there I went to Walmart. More than anything I wanted some shoe polish to start marking my chickens to see who was laying eggs and who was next to get butchered. But would you believe they were out of shoe polish. I couldn’t think of anything else that would work for that and I didn’t want to use tie wraps on the legs so the chickens have a reprieve for now.

I did find some shoes and low cut socks which I’ve been switching to as it’s getting harder to get down there to get my socks started on as my older back says ouch early in the morning.

And as a treat I bought 5 big chocolate candy bars which I hope I don’t eat too fast. One disappeared on the way home.

From there I drove on over to  my friend Joe’s which was on the way  home.

The gate was unlocked but no one was home. He must of gone out to make a quick trip to a store as the gate is usually locked when he’s not at home.

Anyway as long as I was there I wanted to check out the chicks he bought from me a few months ago as I suspected one of them was a big rooster by now. The chicks were small when they got them and they tried to pick out all hens.

I had to walk through his garden to get to the chicken yard. Looks like fall to me. 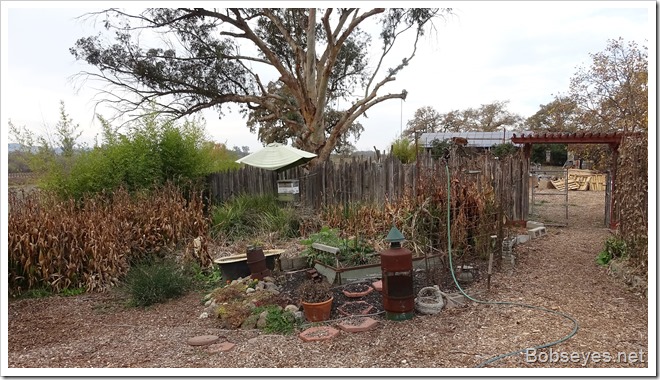 His chickens saw me coming as I approached, but I had no food for them. 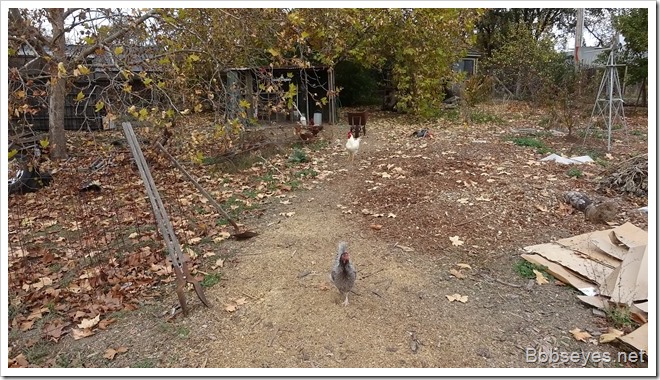 The white one was one of the chicks he got from me and yes sir it was a rooster all right. A nice looking bird. There were a bunch of other birds hiding under the wire things which I think are chicken runs just piled up there and not really in use and not keeping them in, but made a good safe hiding spot. 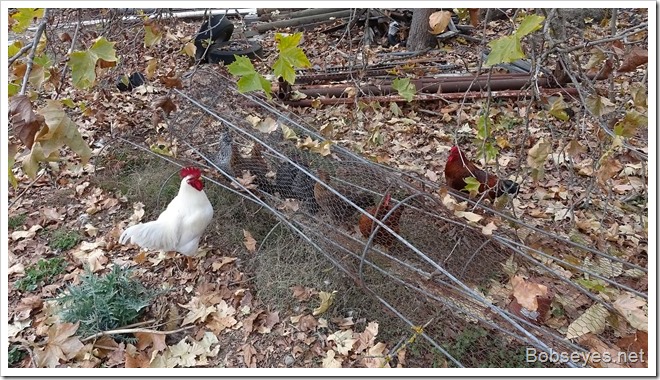 What are these things

On the way out of the garden I saw these things that sorta looked like giant string beans but they weren’t. I don’t know what they are, I’ll have to ask Joe when I see him. 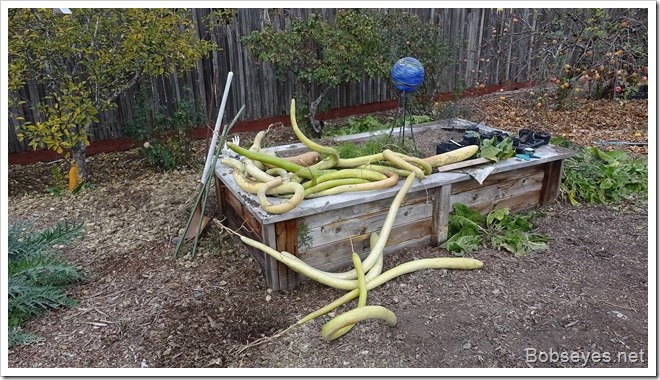 I got back in my car and headed for home about a half hour from there.

On the way I decided to detour and see if John S. was home as I hadn’t seen him in  a long time. He and his wife were home so we had a good visit catching up on stuff.

It was just getting dark when I got home so I left the chicken feed in the car for now and went out and closed the chickens in for the night as they were all up on the roost except the one little one that was stuck in a side pen which I picked up and put on the roost with the other little ones.