Trying to cut costs at the dentist

Today was dentist day, so I put on some clean clothes and drove on over to Forestville.

Made a deal with the dentist

I told the lady at the front desk I could only pay for a cleaning and not x-rays or a doc’s exam. So she talked with the dentist and my dentist gave me the x-rays for free, but said I had to see her on my next appointment so I agreed. Actually it’s not the cost so much of the x-rays as much as it’s the fact that I don’t like what I call routine x-rays. And all the years they’ve taken these x-rays they’ve never found anything.

My lose or my win

So I got my teeth cleaned and went on home. While I was sitting there taking it easy the phone rings, it’s the dentist’s office. My dentist found a cavity under a crown and another small cavity under another crown that she may be able to fill. But I will need to replace the other crown. Darn. I have a special fund that I keep to pay for this big stuff, but the cleaning stuff comes out of my monthly money so I’m ok with this cost. Sometimes I think I can’t win, but then again it’s nice to know there is someplace to get this stuff fixed up and not suffer some real pain.

Since the hardware store was right next door, I went in and purchased some pipe fittings.

Talked with the  dam guys

I headed on home and stopped to chat with the dam guys who where having lunch at the county yard. We shot the bull for a bit then they had to go back to work as they are in the final stages of installing the Guerneville dam and prepping the Vacation Beach dam.

I continued on home for a nap. It was rather warm out in the sun so I wasn’t into working on stuff much, although I wanted to hook up some water pipes which I’d planned to do before dark, but never got to it.

Getting the peeps to drink for the first time

My Brother Tom says the best way to get the new chicks to drink water is to just pour it on the floor which sounds reasonable to me.

When chicks hatch they don’t eat or drink for a couple days or so, so they can ship them fast and they are ok without water and food.

So when the chicks arrive it is important to get them drinking water and eating so they stay alive. One of the methods is to pick each peep up and dip it’s beak into some water, but if you have a lot of chicks that’s a big task, so Tom says he found a better way.

The problem with that is my paint is freshly painted and I don’t know what’s on it from drying so I wanted to wash it down just in case.

Washing down the floor. 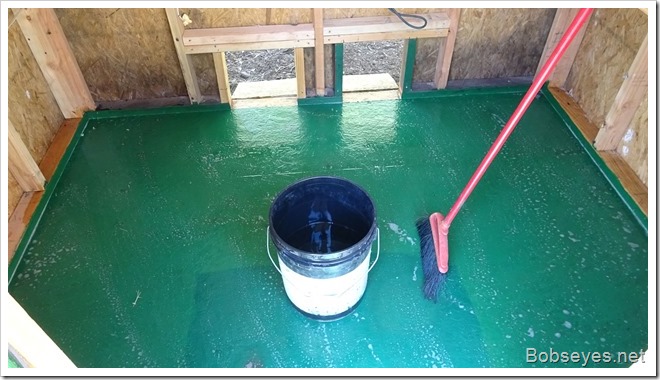 The only problem is where there was standing water the  paint changed to a lighter color until it dried out again so I’m a little concerned about that.

I spent most of the day puttering around in the garden and yard. I did pull a few weeds in the  garden and ate some blueberries. I also checked out my brothers raspberry patch as he has some real big ones that are just starting to get ripe. Looking around there’s more ripe ones on there than meets the eye so I ate a few and knocked some weeds down.

I went over to my brother’s house to check on the chicks and he said they were shipped yesterday so will likely be here Thursday or Friday. I thought they had shipped the day before but that was only an email stating they will be shipped. So as far as I know the chicks are on the way.

While I was there he said he had some squash out in the garage if I wanted some. I was planning to cook up a big pot of vegetables in a couple days but decided tonight is the night as he gave me this box of stuff. The orange is a big tangerine that my brother Mike grows in Healdsburg and Tom sells them at the farmers market. I sometimes get the blems which are perfectly fine and delicious, but don’t look good enough to sell.

Anyway here’s the box of stuff I took on  home. 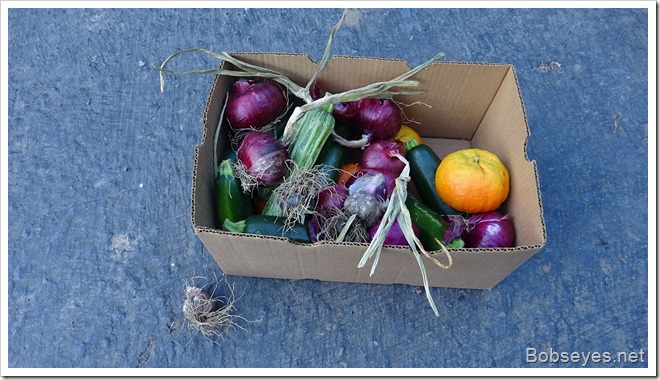 I cut up most of the stuff and some potatoes too and filled up a big pot and it’s cooking now. I like to cook it about two hours to develop a nice broth.

That was it for me today. I’ve been getting rested up and about ready to tackle some more work that needs to get done.

2 Responses to Dentist, Dam Guys, Cleaning the Coop Floor, a Raspberry Patch and a Big Pot of Veggie Soup