Dealing With Corn and Getting a Paddle In Below Monte Rio

Time on the river

What to do today. I had a bunch of projects that need to get done but it was suppose to rain tomorrow and the next day and today was rather cool and the projects just didn’t seem like they were going to get done.

Dealing with the corn thing

The corn thing has been getting me which means I don’t sleep too well and get some sleep around 6 in the morning for a few hours or so. I lay in bed getting as much rest as I can which means I get up around noon and now it’s time to eat for the day. I need to eat three meals in one meal as each time I eat or drink anything after getting a corn hit I get hit again for a week or so before it tapers off.

That means I eat a big meal about a quart of soup or something to really fill me up so I have enough energy to do the kinds of things I like to do, which means by the time I eat all of that I need a short nap. :O)

I needed some more onions too so around 1:30 I drove to town and went to the store and bought ten big onions. They always ask me something stupid about what I’m going to make with all the onions or all the potatoes I buy and are sorta surprised at my answer of the corn problem and almost every thing in the store is corned in some way and not marked either. It’s something I’d never wish on anyone and sometimes wonder how come I haven’t jumped off a bridge yet. :O)

But life goes on with whatever you get or got until it’s over and I don’t want to miss my share of it. That all mans I deal with the corn problem the best I can.

Headed to the river

Anyway I got my onions and headed on down to Monte Rio. I was thinking of going to Jenner by the ocean but it was cool out and there was a bit of wind down there so Monte Rio it was.

I put the boat in the water and parked the car and headed down river which looked pretty good eh. As I pushed my boat off the ramp and was gliding out I was thinking this is great and am fortunate to be able to do this. 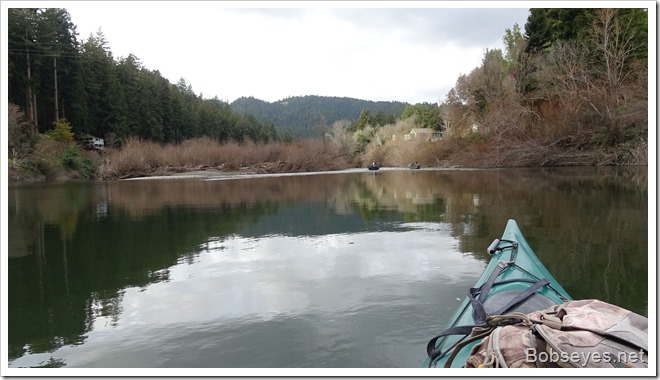 There were a couple boats in the slot and fishing was slow today. I shot the bull with them for a bit then continued on down the river. 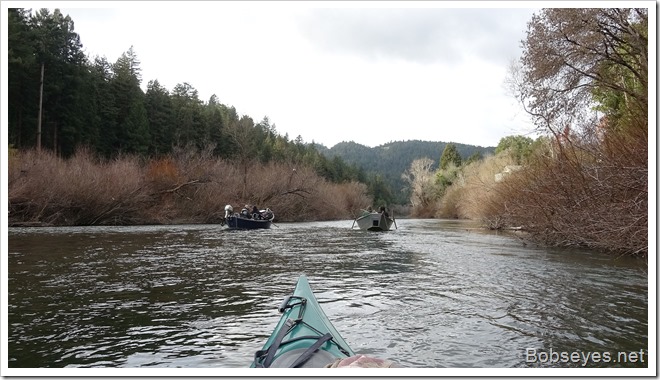 I didn’t get far when I ran into this guy I met the other day who lives down here. His name was Chris and we talked for a bit then I headed down river some more. 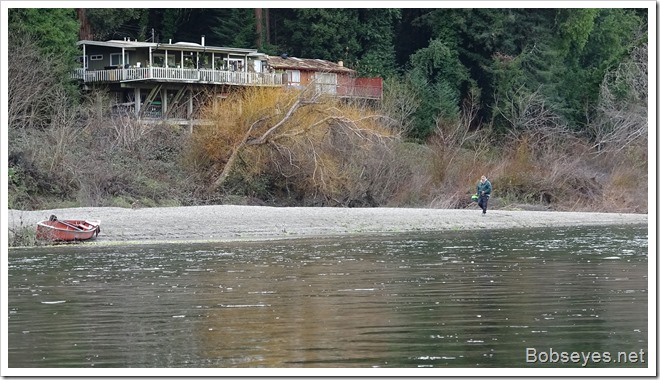 Shortly I saw this guy sitting on the bank who I thought might be fishing so I paddled closer and he waved when he saw me taking a picture. It turned out to be Sam and he wasn’t fishing but he was a fisherman doing some sheetrock work in one of he houses and he was on break. He wanted to know if the guys in the slot were doing any good. We shot the bull for a bit then I took off down stream again. 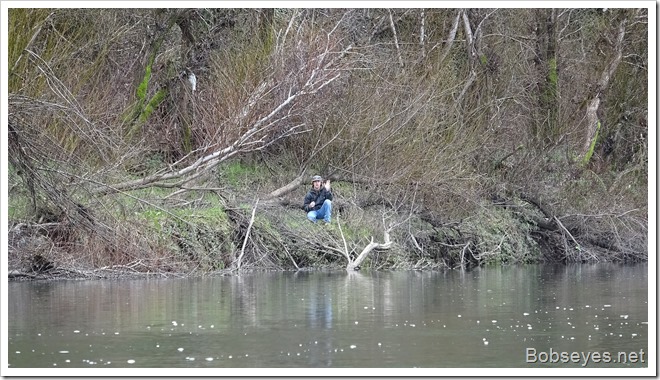 Just below him I saw some turkey vultures flying out of the trees over the water so I pulled in to see what they were eating. They were eating some kind of fish which was in the water below them which you don’t want to see. :O) 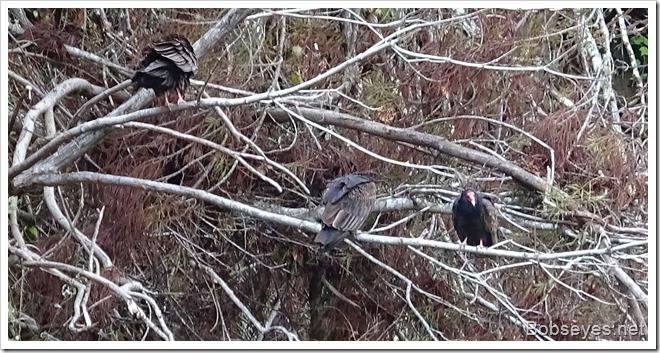 Check this out instead, view down the river. 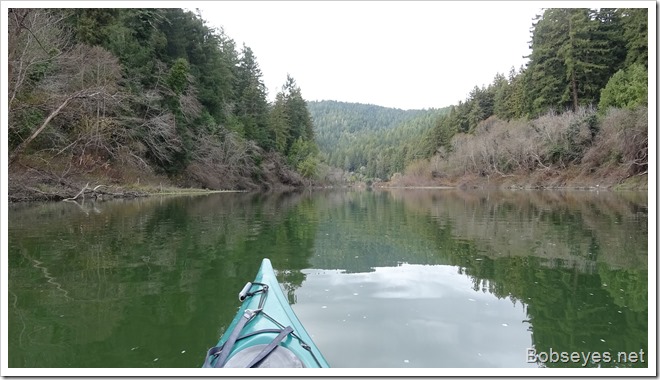 I pulled in here at the Villa Grande pool and saw a guy fishing down there on the gravel. 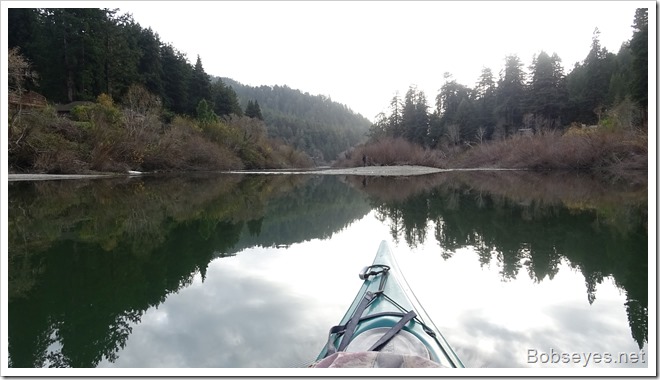 Yep it was Andrew a guy who lives here and fishes. He said not much action right now. The last couple days he said he’d fished all day with no action but the last twenty minutes of the day he had fish action and it was the same to day, at least the no action part and the day was almost over so it was maybe action time. 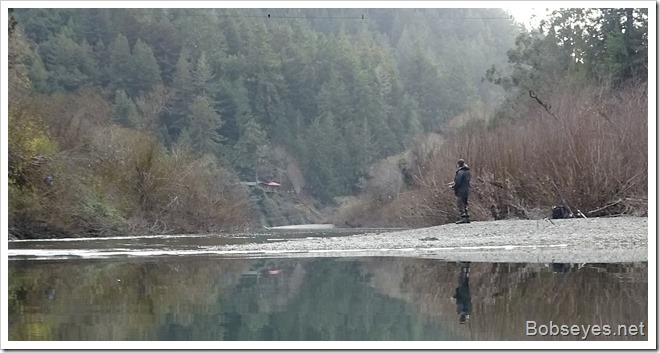 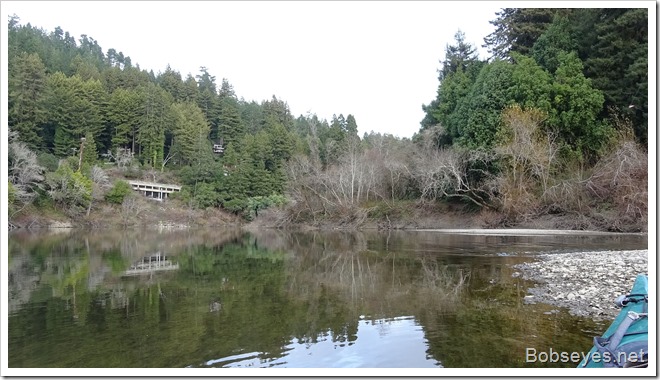 So I paddled over closer coming up the side of this rock as not to spook them too much. 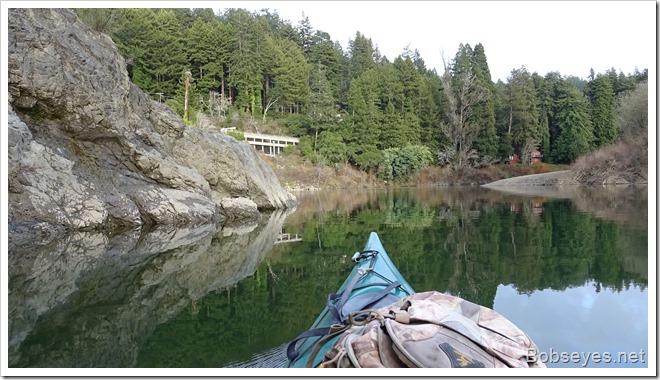 I watched them dive and come up and eat something but I couldn’t make out what they were eating so  took some pictures hoping to blow them up on the computer to see what they where eating but no luck there. I never did see what it was.

Two river otters that had just surfaced to swallow something but I didn’t’ see what it was. 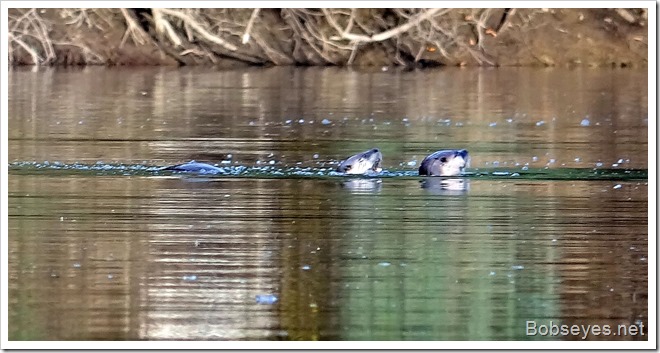 Whatever it was it must have been small as they spent no time getting it down.

I was looking to see what they had in their mouths but saw nothing.

I paddled back over to give Andrew a report and after a bit I headed on up the river as it would be getting dark soon.

I saw the guys in the slot heading their boats in the direction of home before I got to them.

I caught up with one of them at the boat ramp just up ahead taking his boat out for the day. 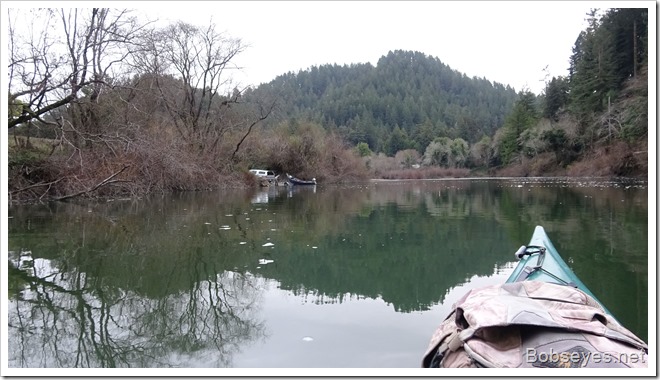 I paddled up behind him and we started shooting the bull and did it until it was almost dark. This is a guy who went to school with my brother Barry and cousin Eric. He told me about the time he was with Eric. He and Eric crashed George’s car on Forth Street a teenage hang out in those days. They were racing another car and crashed into a car that ran a stop sign. His first name is George. He’s also the president of the Duncan’s Mills Sportsmen’s club. 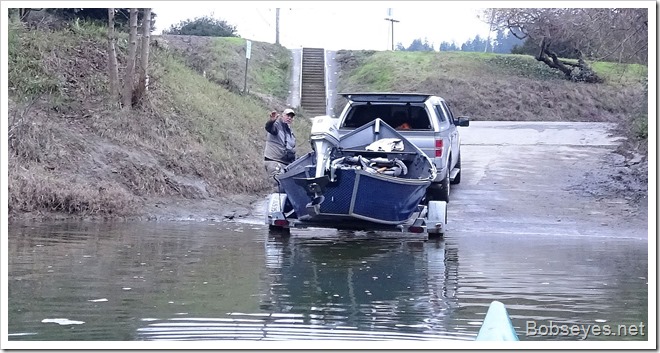 We talked so long it was getting dark as he pulled out. 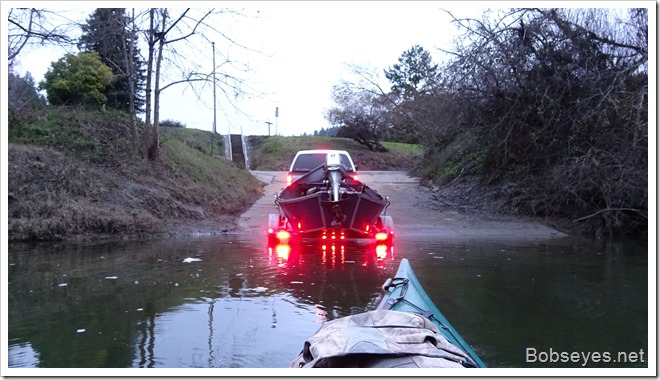 I pulled out as soon as he moved out and loaded and went on home for the day. 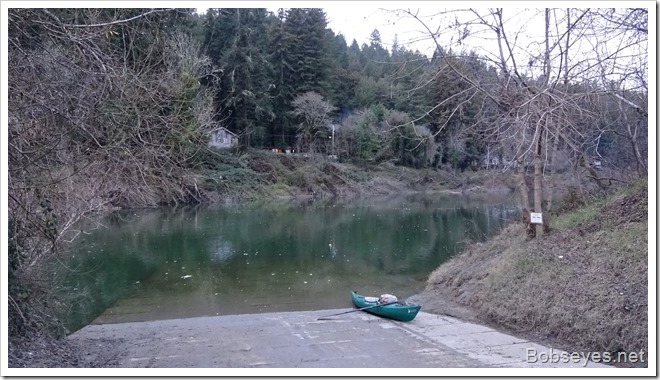 It was dark when I got home and the chickens were in the roost so I closed them up for the night.

That was my day. Nice one on the river.