Yesterday wasn’t one of my better days. The corn got me the night before and I was up all night with the itches so I spent most of yesterday trying to catch some sleep.

Trimming up the kiwi’s

I did get out to cut on my kiwi bushes. I have a male and a female bush or I had.

I started cutting with the loppers until I had all the male vines off the female plant.

The female plant is that thing with no brush on the right and the male plant is on the left still with lot of vines. 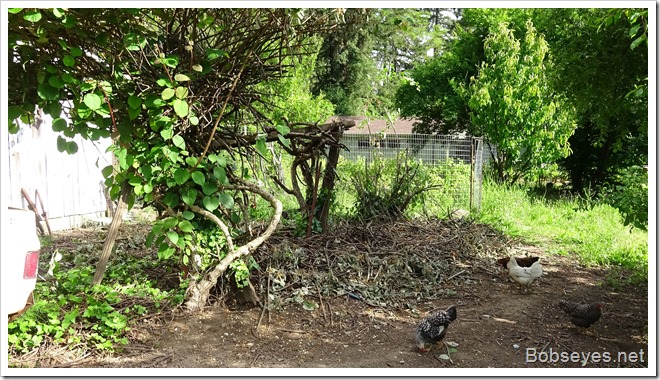 That means no fruit from the kiwis any more unless I get another female plant.

That was it for yesterday and I got to bed early and sleep well last night.

Today the third of June

After checking on the chickens I was off to Jenner to kayak the estuary.

I put the boat in the water and parked the car and was off across the river to Penny Island where I sat for a spell before deciding to head on down the river to it’s mouth where it dumps into the ocean.

I’m heading down the river along Penny Island. It’s a bit foggy out but still real nice. It’s always nice when the wind is down which it is. 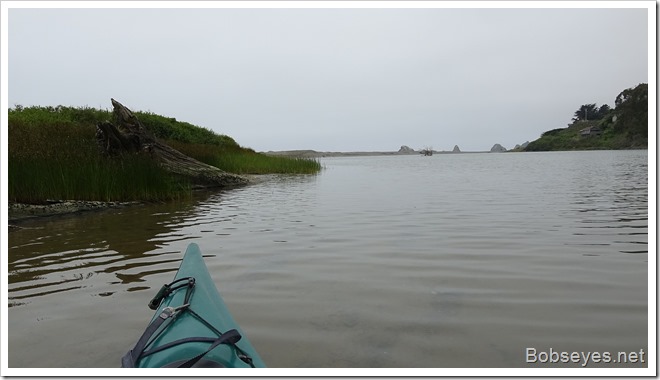 I stopped in this spot for a bit on the way down. I’m headed down there where you see the rocks where the river goes into the ocean. 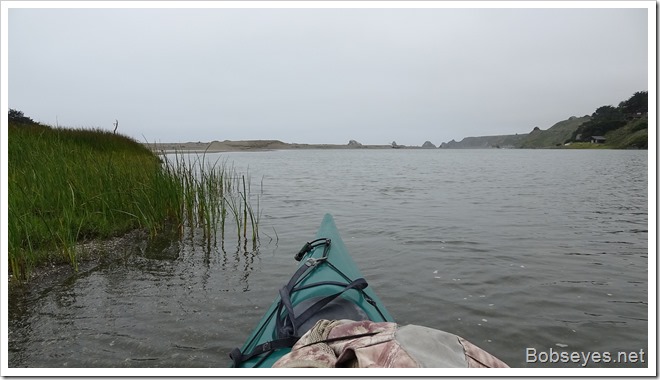 There were two terns I paddled by hanging on the end of Penny Island, just resting. 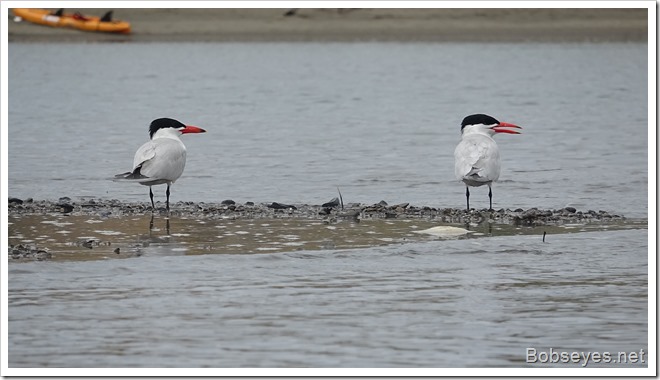 I’m paddling across the river headed down to the mouth where the big rocks are. Not much wind. 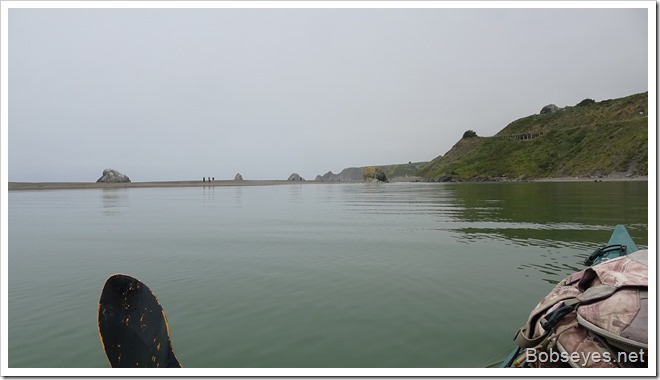 I cruised by these cormorants resting on the rock. I think that’s a young one of the left. 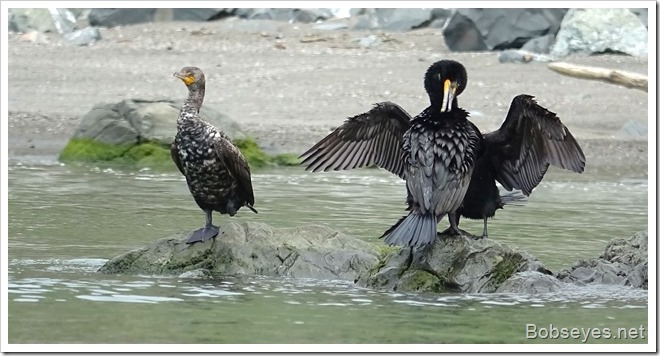 There were some geese resting on the beach across from me. 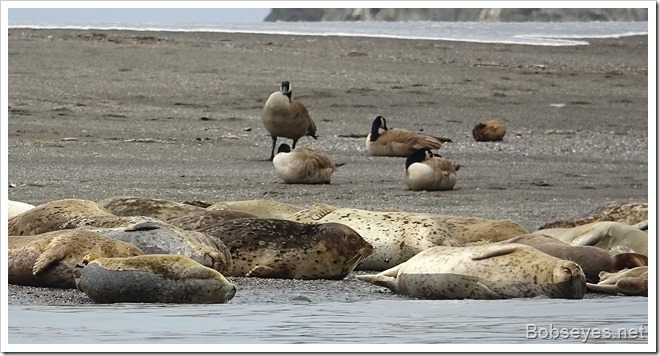 Paddled into the river’s open mouth

I paddled into the river’s mouth and stopped here as the waves were getting more turbulent and I get sea sick easily especially looking through the camera. I’m looking out into the ocean. 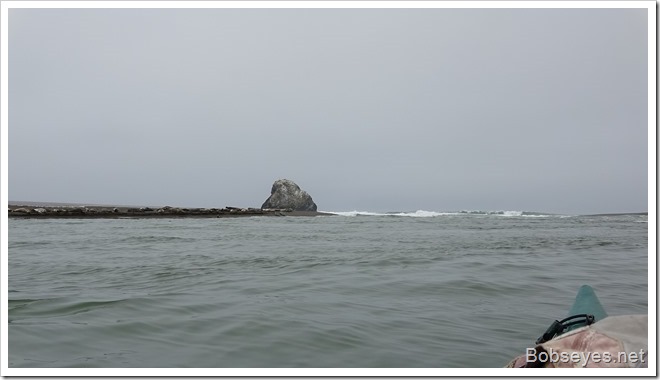 The harbor seals were resting across from where I was at. 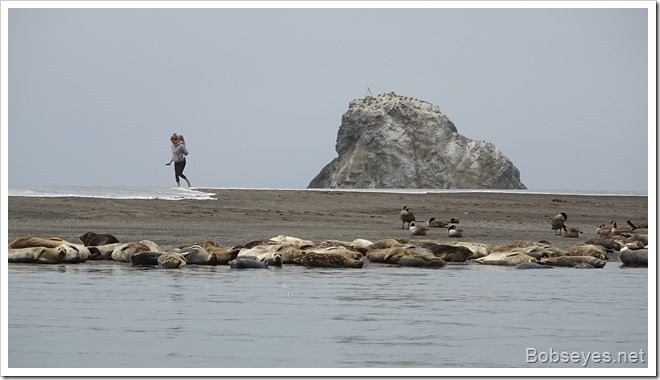 And there were some more seals at the end of the sand. 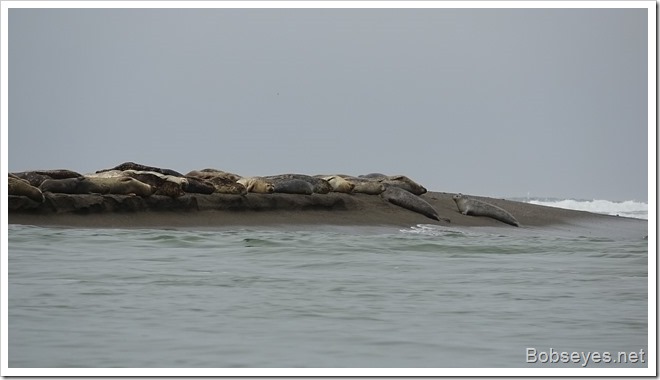 I noticed this sleepy seal as I paddled on by heading back up the river. 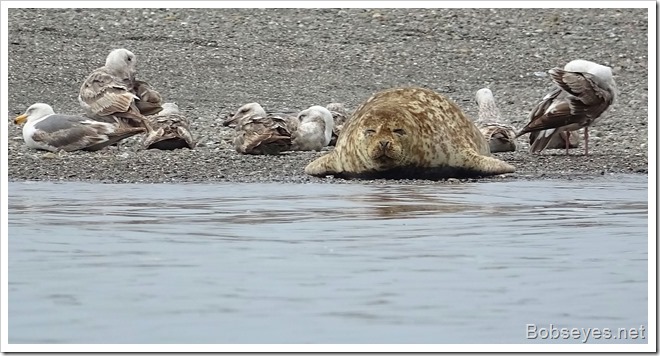 Something for the chickens

As I paddled along I was looking for some small gravel for my chickens. They eat the stuff to help grind up seeds and there’s a good supply of it down here. I picked up a small bag of it here. 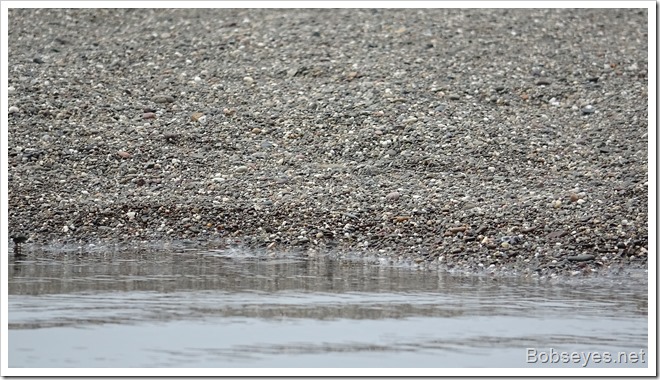 While I was collecting gravel these two birds walked right by me while I was still in my boat. I don’t remember what they are called but I looked them up once. Some kind of rail if I remember right. 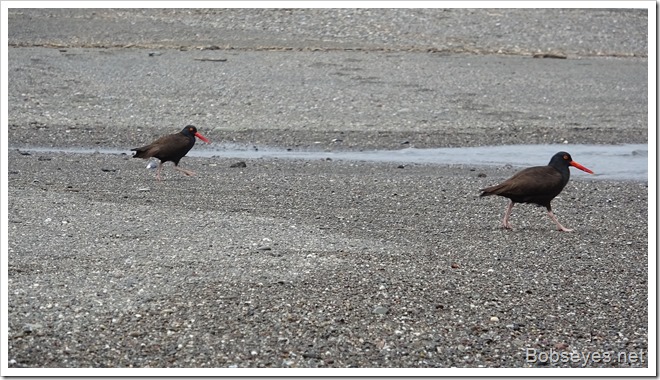 This one picked something up to eat from the water’s edge. 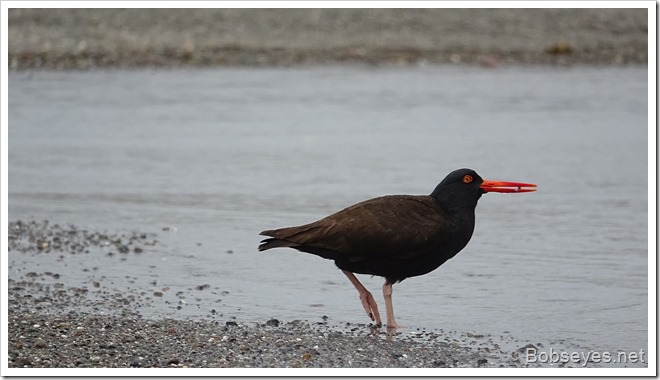 Hiking and berries on Penny Island

I paddled on going up the island’s back channel and landed on the upper end of Penny Island. I had berries on my mind.

I headed down along the south edge of the island. It was very overgrown and not easy to get down the trails. One has to know where the trails are to get anywhere on the island and they are not always obvious. 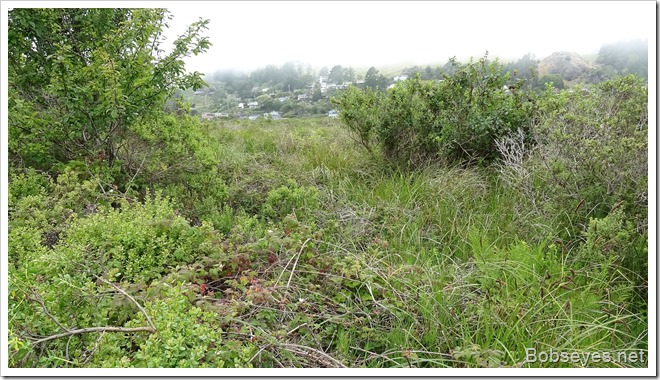 There’s weren’t a lot of berries ripe yet but there’s lots of them on the way.

I did find some of my favorite blackberries. They disappeared fast. 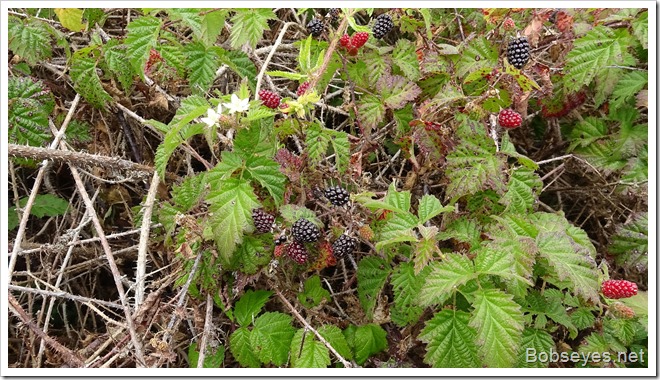 I found some salmon berries too but they aren’t my favorite I’d rather eat blackberries. Much better taste. 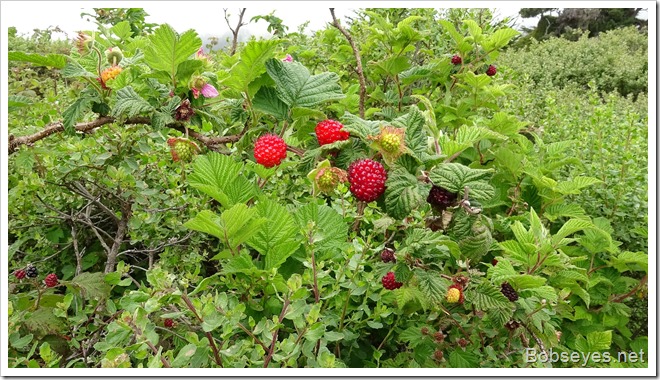 I made it about half way down the island to this plum tree. I tried a plum but they could use a bit more ripening. Pretty sour. 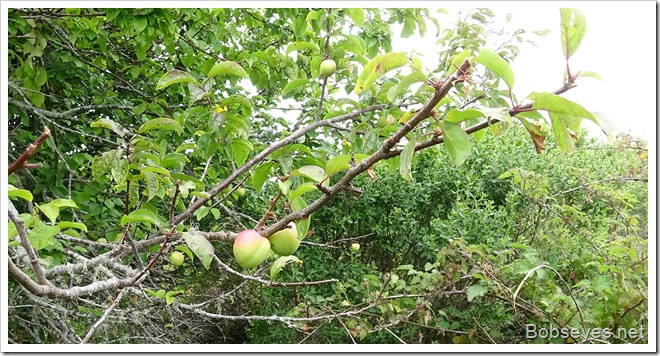 After doing my best to get around the island pushing over brush, I headed back to my boat by this big log. That green grass is nice to sit on so I made myself comfortable just behind the log by my boat for about an hour or so. 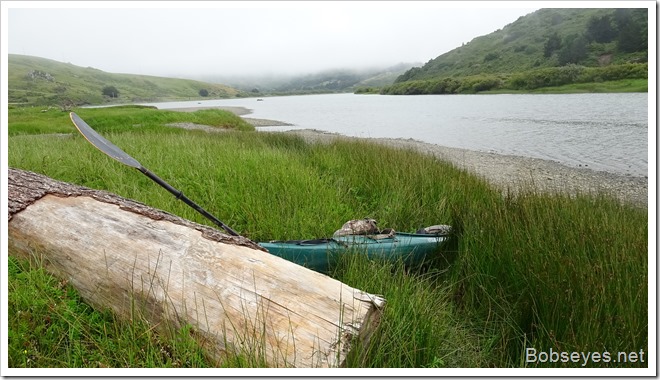 It turned out to be a good spot for a rest and a nap just enjoying the day. 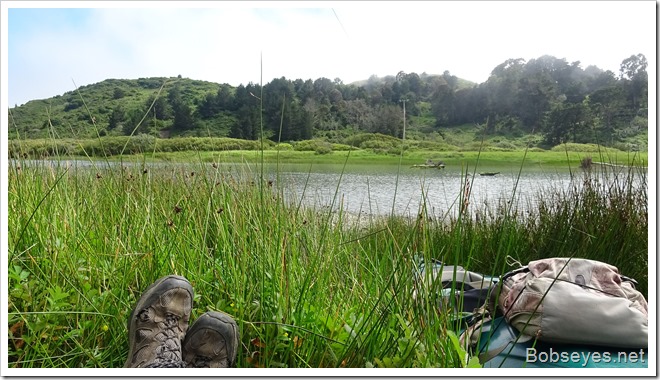 After a good rest there I put the boat back in the water and paddled around the upper end of Penny Island and headed in for the day to the boat ramp just up ahead. The fog has been waffling around most of the day. 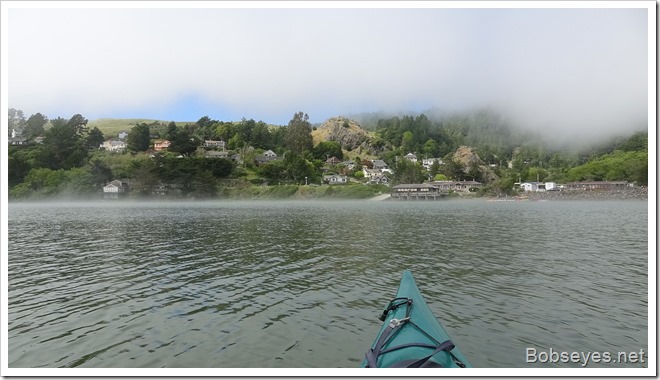 I loaded up the boat and went on home for the day.

It seemed like another nap was in order then I went out to see how the chickens were doing.

Another hen wants to be a momma

They seem to be doing just fine. I do have another broody hen that seems to be persistent even though I’ve taken her eggs away every day.  I hunted up a cardboard box for a nest for her and I’ll try and transfer her and her eggs to the box tonight and put her in the nursery.

In the  mean time the little peeps I bought are doing well. 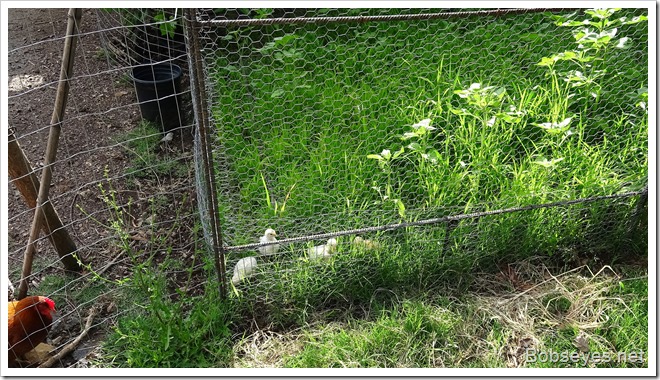