This morning finds us camped under some big cottonwood trees.

First thing Marty had to get under his van and adjust his transfer case shifting linkage as his low gear was popping out of gear on down hills. He got that done. 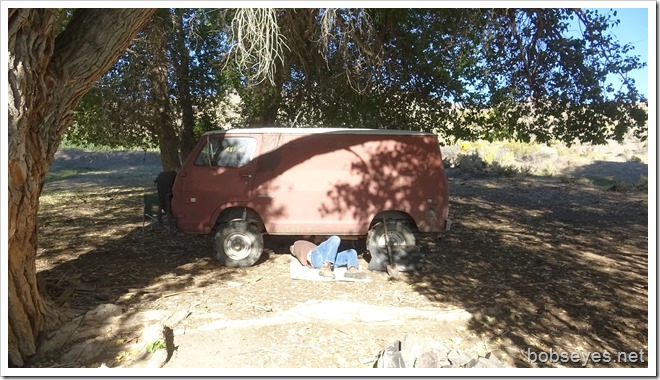 Here’s our camp under the big cottonwood trees just before we headed out for the day. 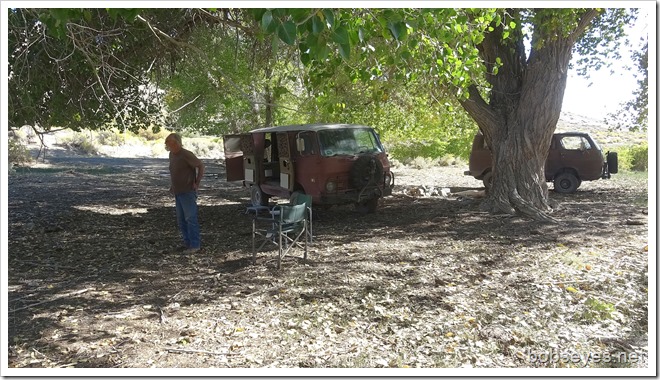 We drove by the mine where the miners were rearranging this area. 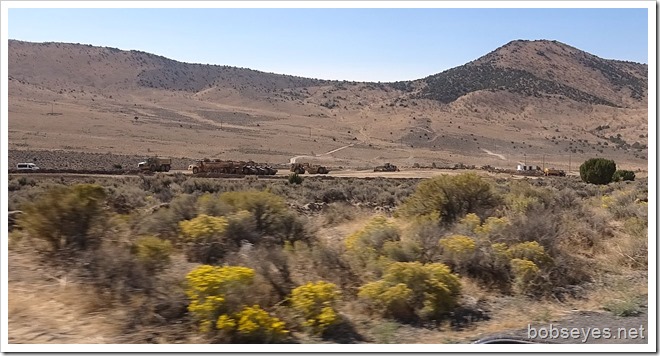 We needed a cell lock so we headed towards Highway 80 near Lovelock and parked here less than a mile from the highway and the signals were good so I caught up on posting posts and Marty phoned his wife. 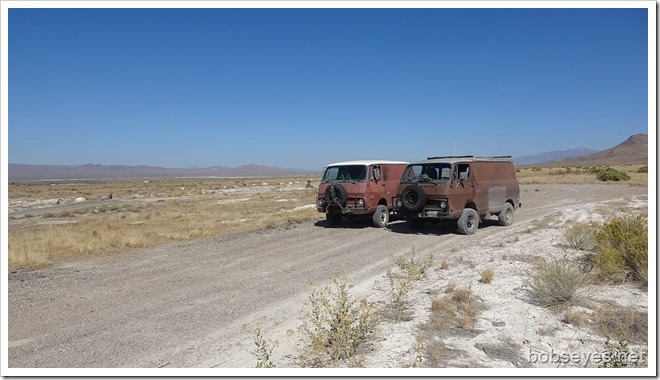 Looking for a way over the mountains

We were good to go so we headed back out this paved road I think it was called Coal Canyon Road. 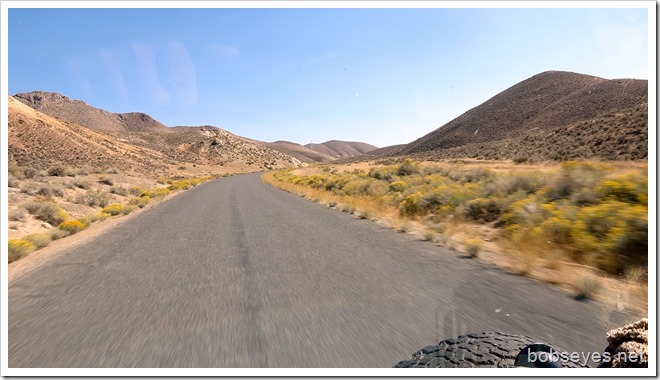 Eventually that paved road turned to this and we drove on looking for a road that was supposed to go over the mountains and down  into Dixie Valley. 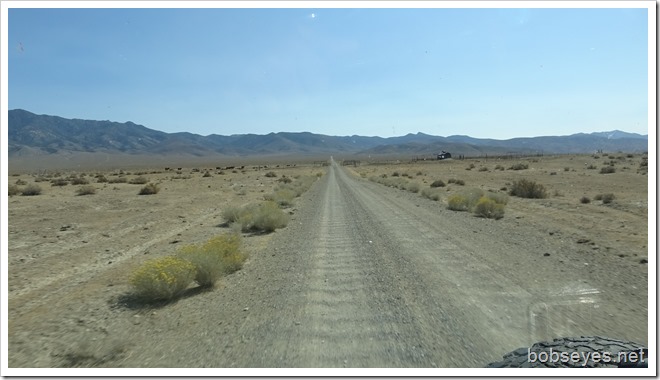 Missed our turn off

We traveled on down this way until eventually we realized we missed our turn off road and were headed up to a place we camped a couple days ago where all the wild horses were at the water hole. 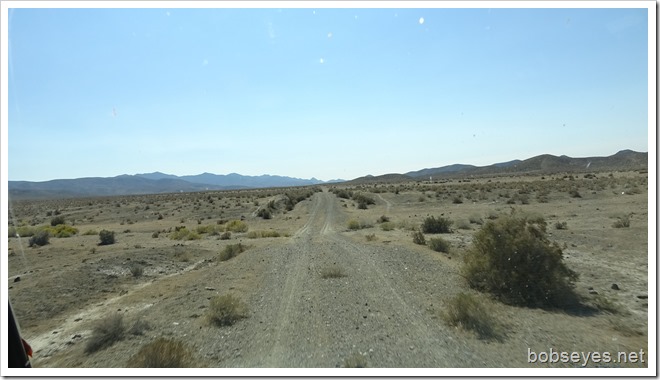 Once I saw all the horse trails on the road I knew we were on the wrong road so we turned around and drove on back to another road we thought would go over to Dixie Valley,…. But.

Talking with a local

We pulled up to this corral that we went by the other day and stopped at and there was now a cowboy there on a horse that signaled me with his hand that he wanted to talk as he rode up to the corral pipes on his big ol horse. 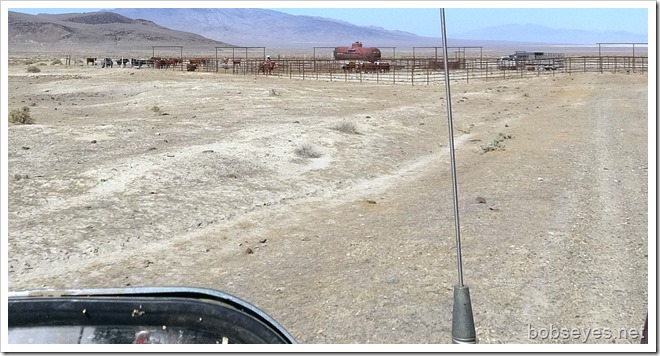 I asked if he was a rancher or a worker on one and he said we’d been on his ranch for the last couple of days. This is an ok thing as the desert is classified as Open Range which means one can go anywhere and camp anywhere out here even on ranches.

Not without one of these

We told him where we wanted to go and he said not that way and I say what about this way and he nods down at his horse and says not without one of these.

So I say, well, do you have a suggestion and he does and explains things well and we were off hoping to find a camp spot soon.

He directed us down this road. 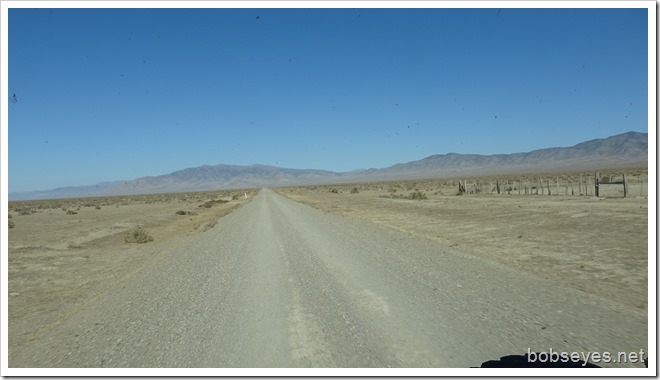 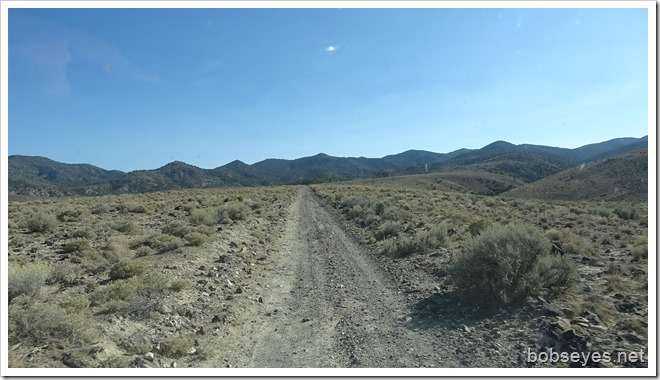 We crossed over this spring water running down the road which turned out to be firm and no slipping. 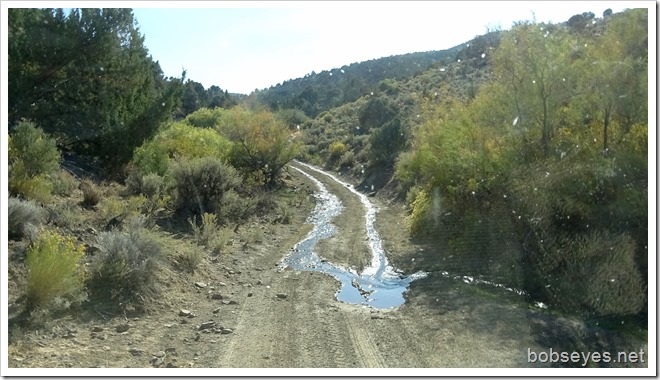 That road just went and went with no place to turn around or camp and I was telling myself if I see a spot where we can turn around I’m going to but that road just went and went until finally we came to this one little spot by the side of the road so we camped as it was  a dead-end road and we were near the end. Marty said it was our worse camp spot but I think it’s how one looks at it. 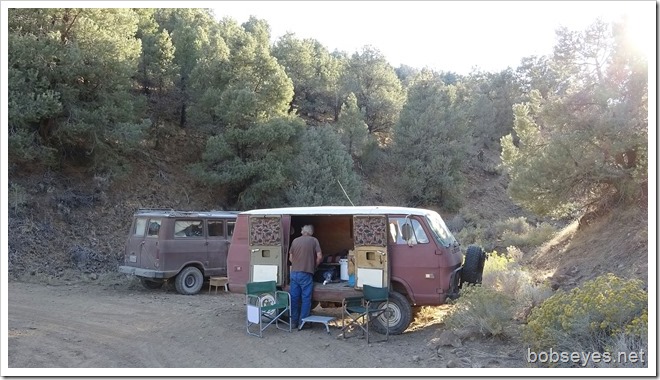 I though the spot we camped at was near the hill top so I headed out for a short walk up the road to have a look.

This was looking back at our nice camp spot as I took off up the road walking. 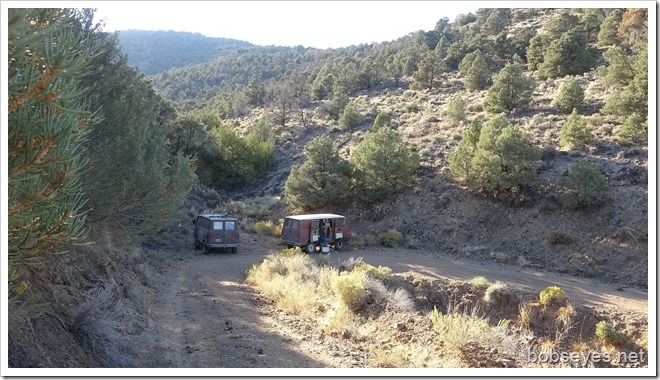 Hike to the top

So I took off up this road thinking if it seemed to go and go I’d turn around but each time I went a bit further it looked like I was almost to the top so I walked on until I got to the top. 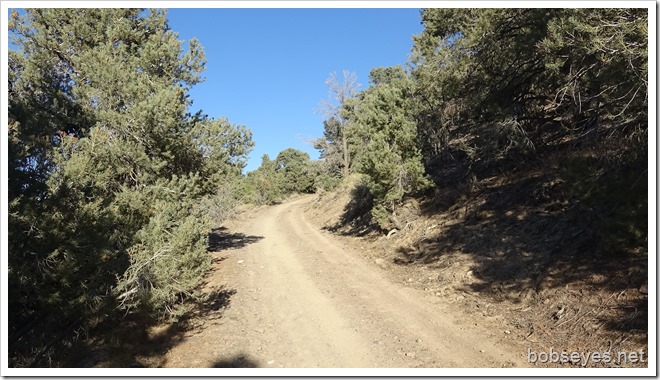 This was the view from the top. I looked around and decided our camp was good where we were and headed back down the road. There was a small place to camp here but not much and it was tight to get into. 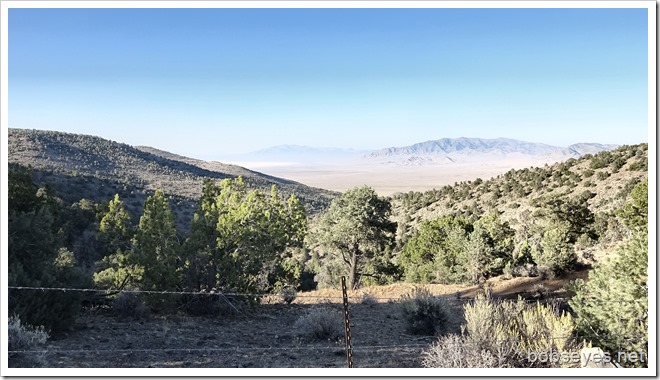 As I walked down the road and saw tonight’s camp I thought yip, it’s all how you look at it.

This will do nicely for the night. 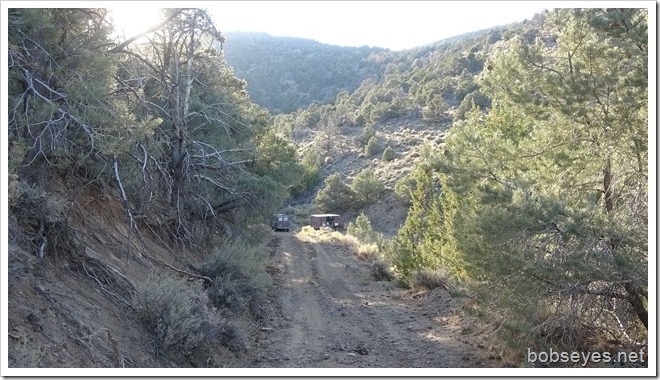 Now todays story doesn’t quite end yet. After dinner we plopped our chairs down in the road saying now someone will come by on the road. It works every time, just block the road.

Sure enough it doesn’t take long

We were sitting there enjoying the evening when we heard a quad runner coming down the road. The guy stops and shots the bull with us and says there’s two more behind him and he’s got to leave to stay ahead of them but doesn’t leave and turns out he’s from near were we live. The other guys show up and they all head on down the road in the dark with their headlights on. We moved our chairs back into the road and enjoyed the rest of the evening until it started to chill down so we went into our nice cozy vans.