As you remember I posted my blog at Winnemucca in the morning and drove east on 80 fifteen minutes or so and turned off at Golconda.

From there I  drove sorta northeast on this mining haul road which is called the Midas Tuscarora road. It’s usually in excellent shape unless it rains then it can get quite sloppy. It rained a day or so before so it was real nice now. It dries out real fast. 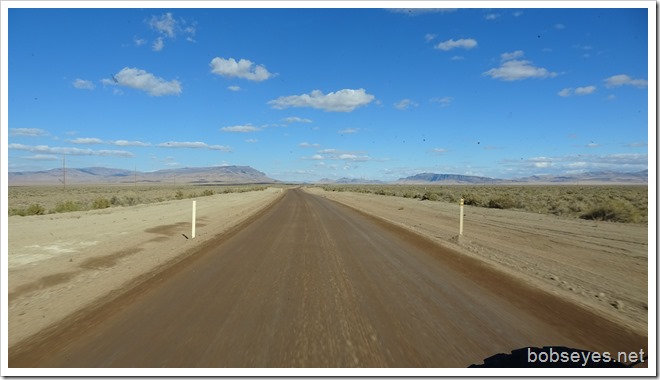 Checked out this side road

While traveling along I passed a side road so backed up and went down it to this water hole. It’s a place they get water to water the road. I walked around a bit to have a look. 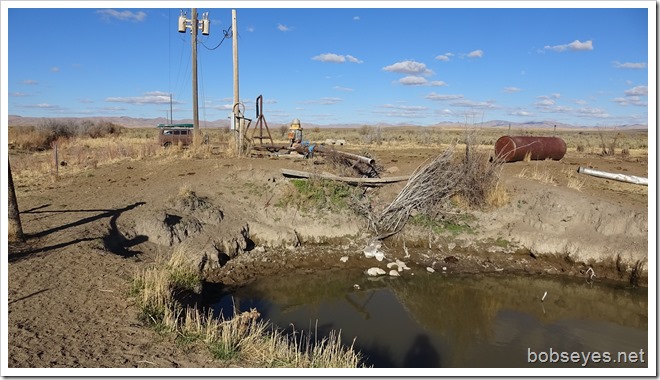 Continuing on up the  main road I was thinking of camping along Willow creek here so I drove to this spot that I’ve camped at before. But the creek was pretty dry so I passed on it and drove on as the reservoir wasn’t far up the road. 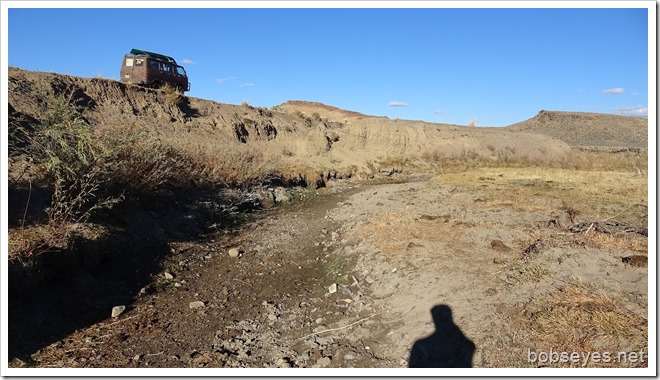 The reason the creek was so dry is they’ve drained the Willow Creek Reservoir to do some repairs on the dam which they were doing last time I was here in the summer, or was it spring.

I stopped here to have a look at the dam repairs. Looks like no one is around and I was eyeing that parking place down by the water. 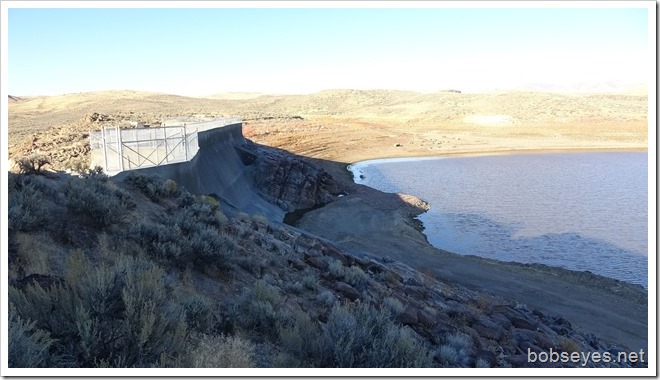 I thought if I didn’t camp there now while the water was this low for repairs I’d never likely be able to camp here as they’d block this repair road, so,,,,,,,,,,,,,,,,,,,,I drove on down there and parked here. 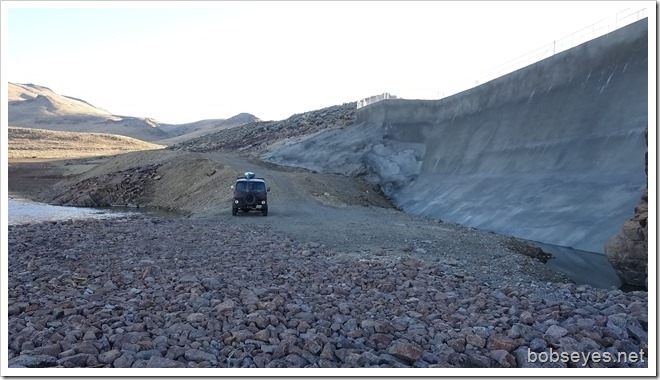 I checked out the controlled water outlet they were working on last time and it was completed. Good place to fish when the water is higher, see those nice hiding pipes on the right, five places for fish to hide. 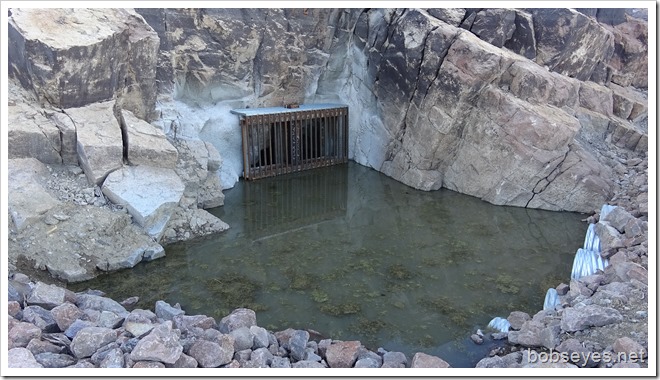 One of the reasons I wanted to come down here is this stuff caught my eye. It’s new. I’m thinking maybe bird nests, but it’ll be under water most of the time. 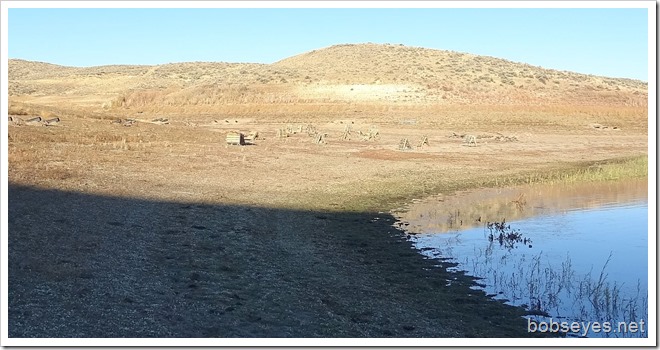 So I walked over there to have a look and this is what I saw. 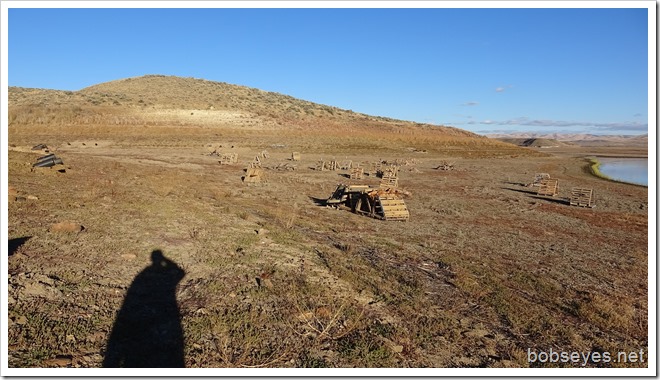 Ha, ha, not bird nests but fish hiding spots or fish habitat. They are constructed to stay under water once the reservoir is back up. They had about a dozen of them and a bunch of big black pipes buried you can see in the upper part of this picture. 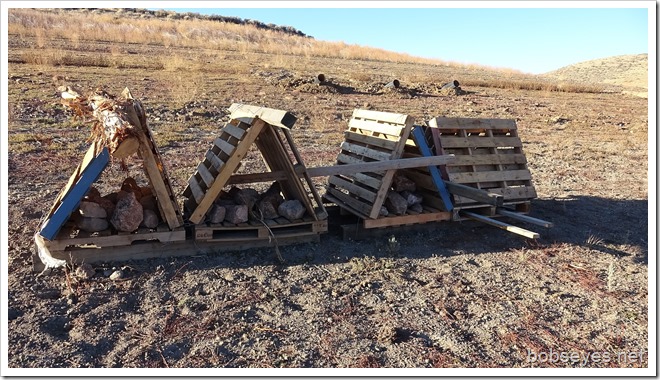 Some more of their designs. 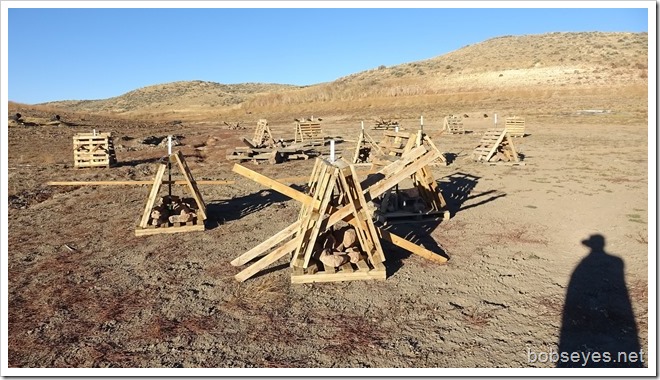 After checking those out I walked back to the van for the night. 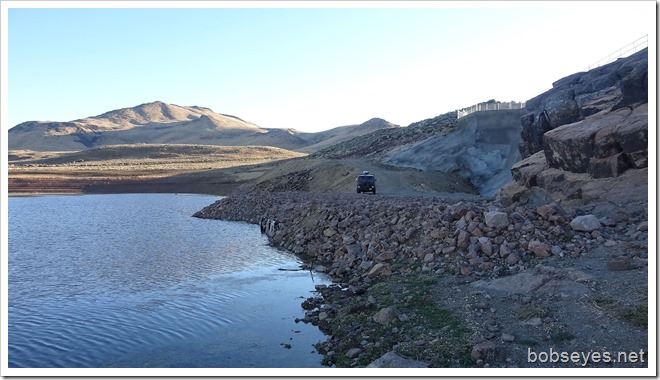 While I was sitting in my van I spied this thing swimming by outside so carefully opened the door and took a shot at it.

I wasn’t sure if it was a beaver or a muskrat but finally determined it was a large muskrat just cruising around likely checking me out. 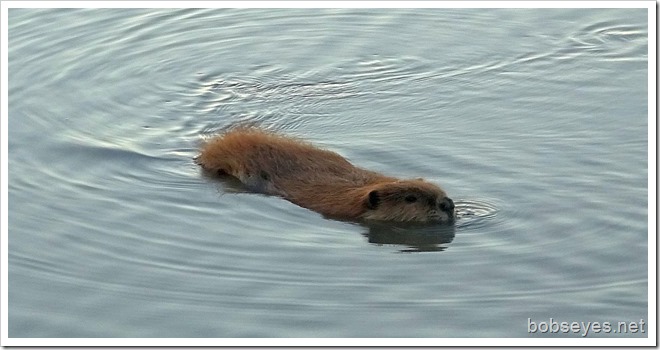 That was it for that day and I had a nice peaceful night, at least until morning.

Friday the next day

Like I was saying I had a nice peaceful night. Just before day break I woke with a large diesel truck running right outside. It turned around and three guys got out for a bit, then they all got back in the truck and left.

I stayed in bed until about nine to let the day warm up a bit, besides I was up until midnight reading last night.

The reservoir and something’s going on

When I did get up and looked out over the water it looked nice. I could see some big trucks across on the other shore doing something. 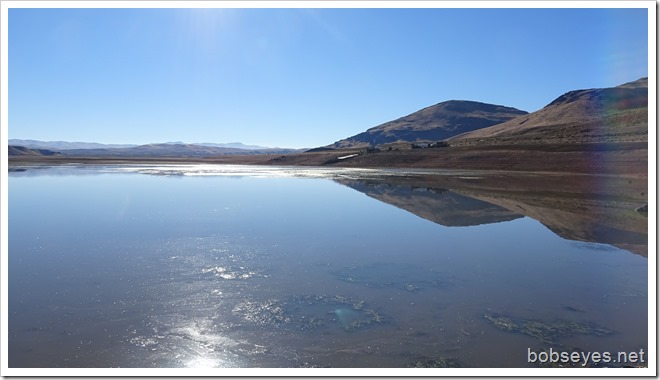 It looks like they are pouring a new boat ramp as this place doesn’t have one and most of the time you can’t get near the water with a boat trailer. 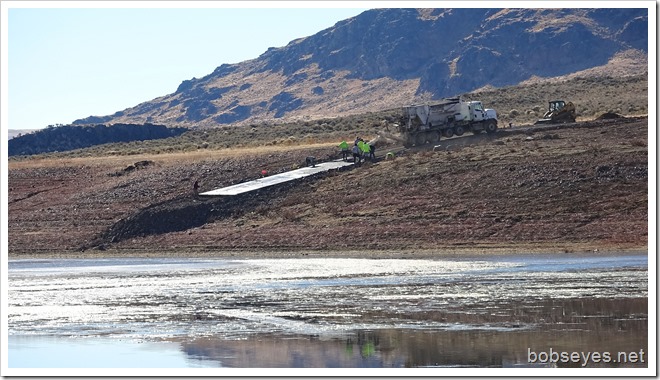 So I watched them work and enjoyed the reservoir for most of the day. 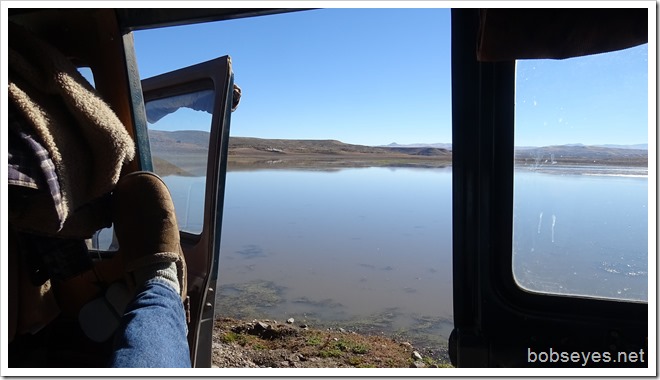 I watched a bunch of geese come in and land on the shore. 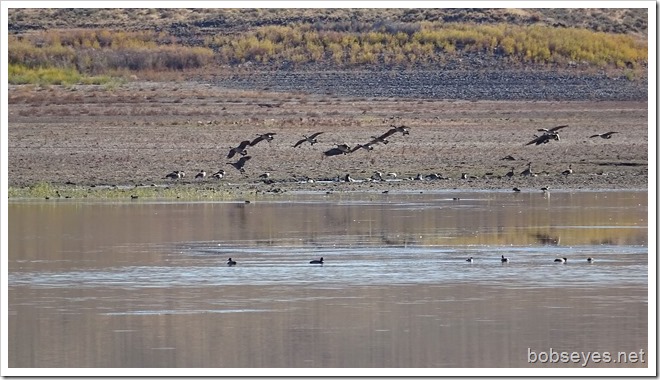 Eventfully the guys got to the top of the ramp. I was checking out their cement truck. They are different than the ones I’ve seen before in our area. It looks like these mix the cement as it’s needed. Maybe that’s because all the jobs in the desert are a long way from the cement plants. 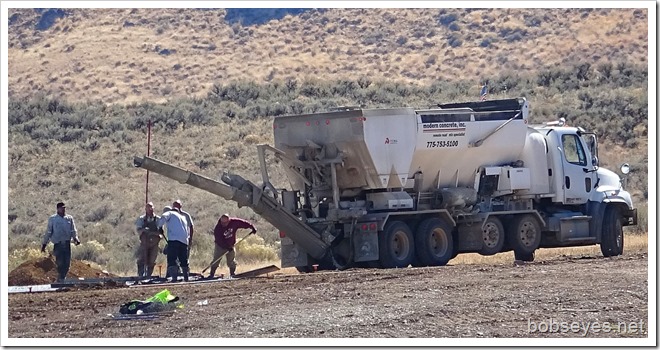 The guys had been working non stop since day break and got to have lunch around two. 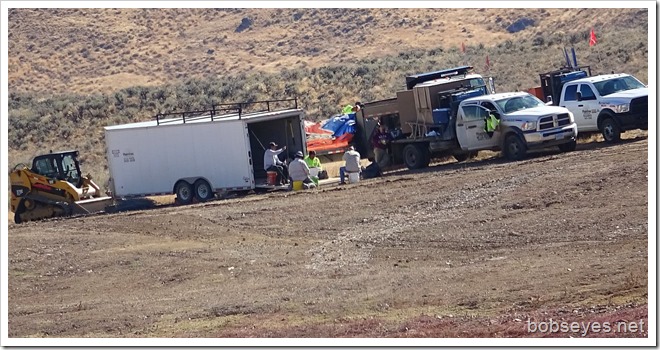 They were waiting for the cement to set up enough so they could put these big tarps over it. I think that is to prevent it from freezing during the night. The pulled the tarps over it at 3:30 and left at 4:00. 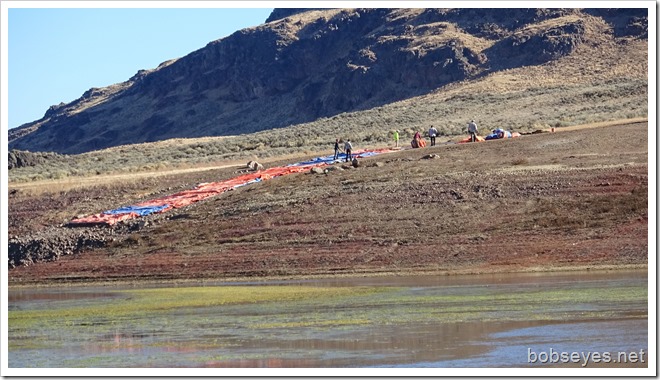 Getting the kayak wet

I’d been thinking of getting my kayak off the top of the van so after they left and a cup of coffee I got it down and put it in the water. I was planning to go for a paddle this evening and then one in the morning,……..But.

I put the boat in the water and started towards the new ramp area. I soon learned the water was too shallow in most of the reservoir. Most of it was less then a foot deep and I need about at least four inches and was almost getting stuck in the mud every which way I went. 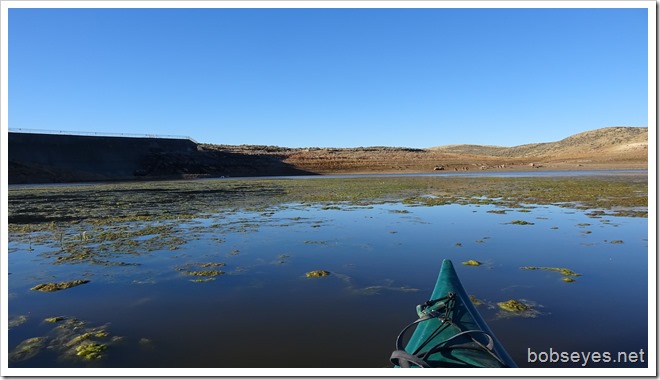 I went where I could and then headed back checking out the five pipes that lead to the water outlet. 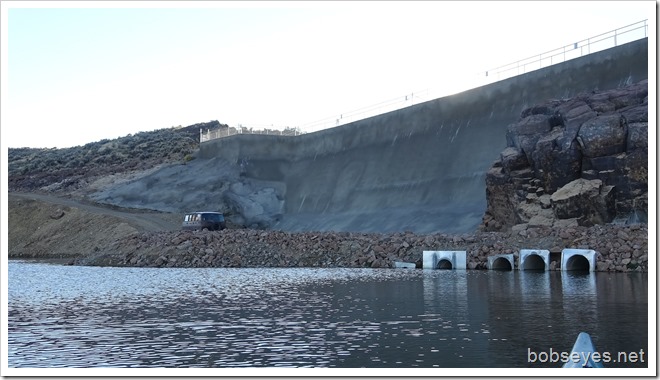 I was almost back to my van with the muskrat showed up and started circling me and did this. About the same warning splash as a beaver makes but muskrats don’t have the flat tail that makes the really loud slap as the beaver does. 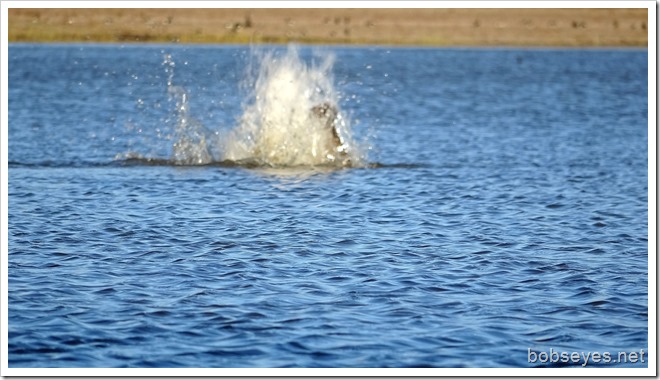 I decided I wouldn’t need my boat in the morning as the water was just too shallow right now so I put it back on my van top and had a little break before heading off for a little walk to check out the new ramp.

I’m headed over to the new ramp and looking back at my camp. 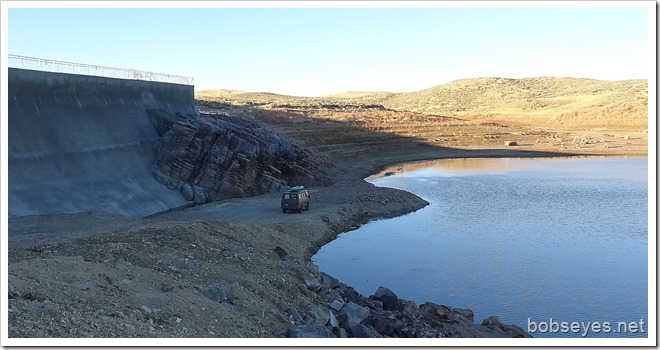 They had to cover up the new cement to keep it from freezing as it got cold at night.

Here I am at the top of the new boat ramp all covered up with tarps. Looks good but a bit steep towards the bottom. 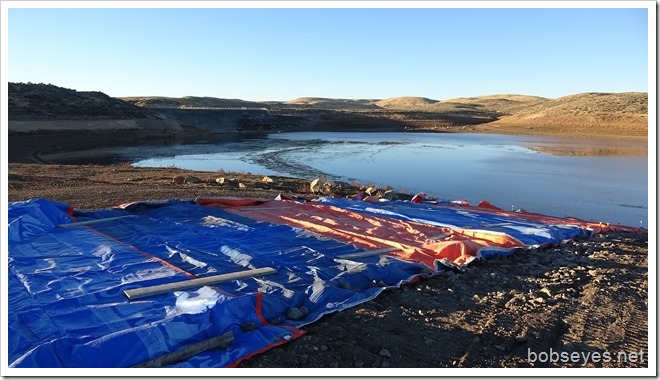 I walked back to the van and on to the fish habitats again to check them out some more and I thought I saw a little cave over there. The cave turned out to be a big rock that looked like a cave entrance.

Back to the van and I’m in for the night.

Not sure what I’m going to be up to tomorrow, but I’ll think about it and come up with something.