Cutting Up Trees, Wood and a Brush Pile and Pruning My Kiwi Bushes

Waited for the sun but it didn’t show

I just waited in the house this morning until the sun cleared the redwood tree that was blocking it from my yard, especially since it was overcast anyway, but it did finally make an appearance later in the day.

Ordered up the brake shoes

As long as I was inside I looked for brake shoes for my Toyota online and found some and got them ordered up so they’ll be on the way soon.

I also found some heavy duty fan belts for my van and ordered them up as it needs new ones as the ones that are on there are wearing and making squeaking noises.

I was going to order up a new fan belt for the Toyota but couldn’t match up the numbers that were on it so will just get it from the local parts store when I get by it on the way to kayak next time.

By now the sun should be out but it was overcast but a bit warmer so I went outside to do some stuff.

Cutting trees down and up

I got the chainsaw out and started to cut these two small big leaf maple trees down. During the process I could see the one tree wanted to fall the other way which would likely smash some stuff so I got a rope and fastened a small piece of wood to the end and threw it up into the fork of the tree so I could pull the tree down which I did. 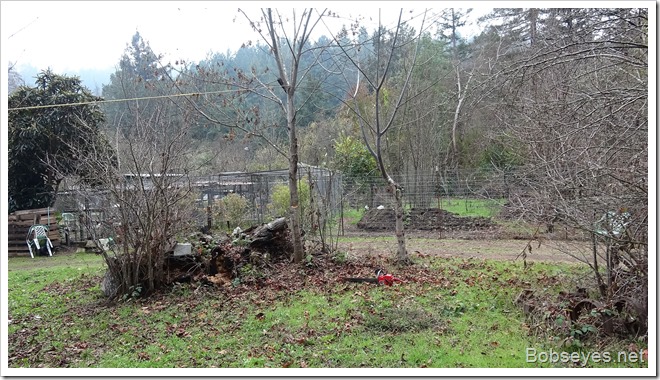 I go the trees down and was cutting them up when the saw ran out of gas so I filled it up and continued to cut up the wood. 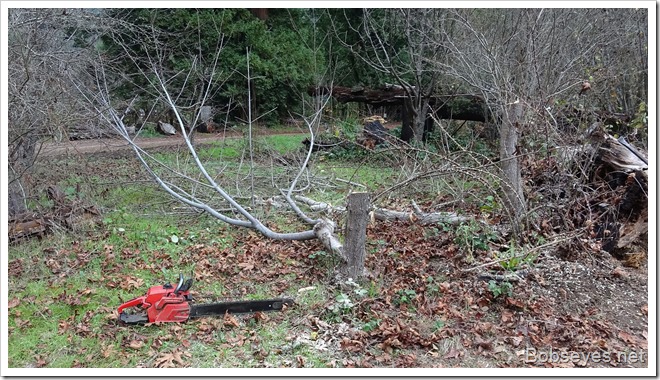 Now all the wood is cut up. I’m leaving the stumps so they will sprout and grow, but not so high to block the sun from other trees that give fruit. 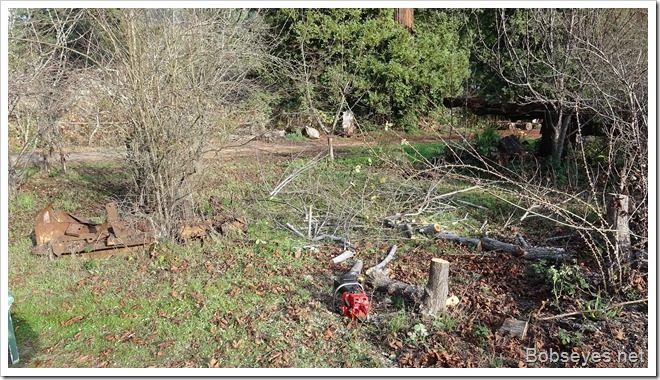 I left that mess to clean up some other time as I had other stuff to do with the saw.

My bother Tom left this wood in the yard uncut. He said something about it haven’t beetle bugs in it. The wood was riddled in worm larva from some kind of beetles. Beetles don’t bother me so I cut it up for the wood stove. 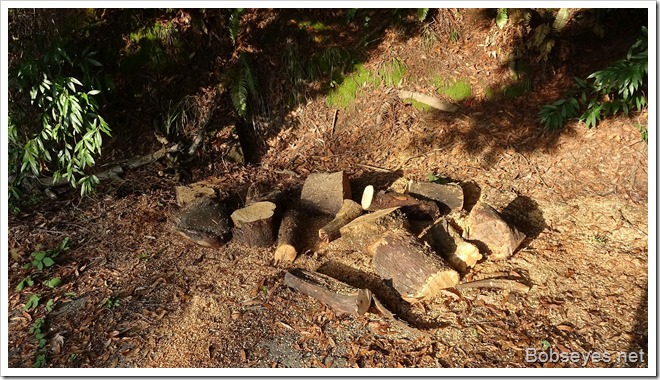 Cutting up the brush pile

Once that was done I stopped for another break and checked out this brush pile that is in the way of my vegetable garden. I can either move it which is a lot of work or use it where it is. 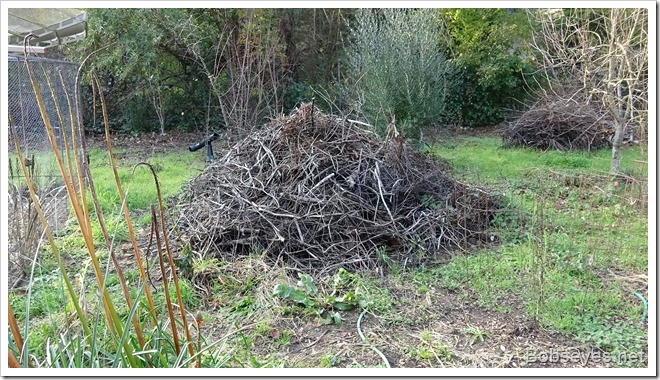 I elected to use it where it was but I needed to condense it. I used the chainsaw to cut it up more into smaller pieces. I was doing well about twenty cuts until I took a break and started again when the chain came off the saw so I guess that was enough for now. 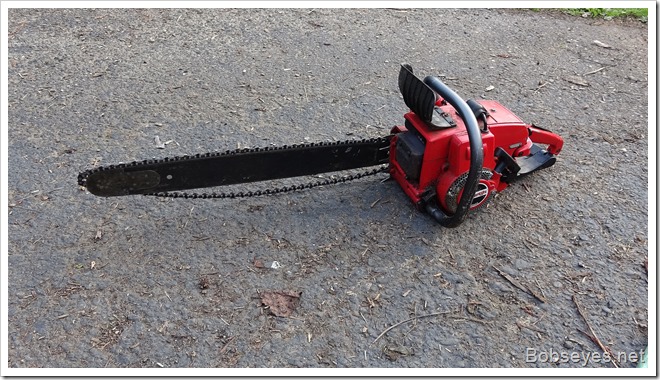 Here’s the cut up pile.I’m thinking I can just plant stuff in it with a bit of dirt until it disappears. I’s like to get a few more cuts in it first though but I’ll save that for another time. 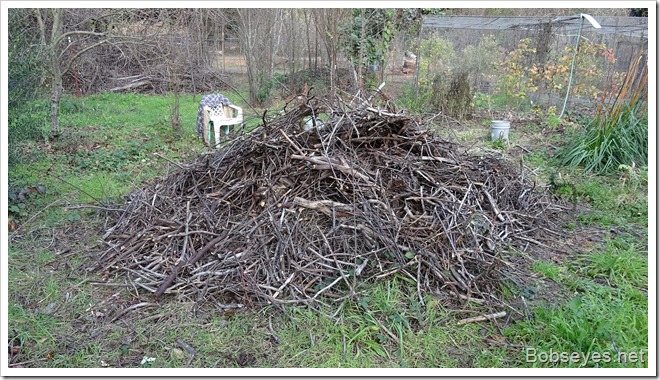 I did get the chain back  on the saw before I took another break.

I checked one of my smaller grow panel to see how it was doing as I let the chickens start eating it a couple days ago.

It’s doing what it’s supposed to do. The chickens eat it down to here and then it has to grow some more before they can eat some more preventing them from destroying it in one eating. 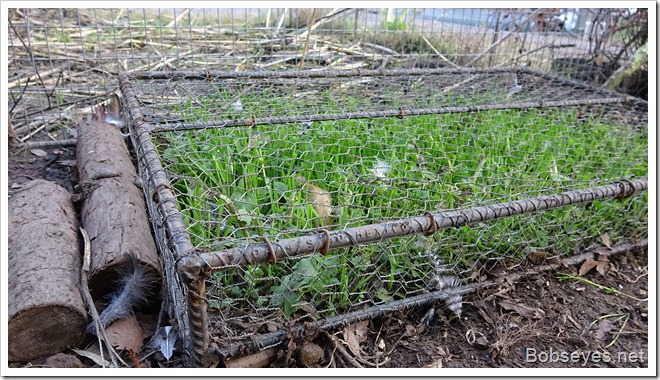 Around 4 the chickens where begging to be let out to graze so I let  them out. 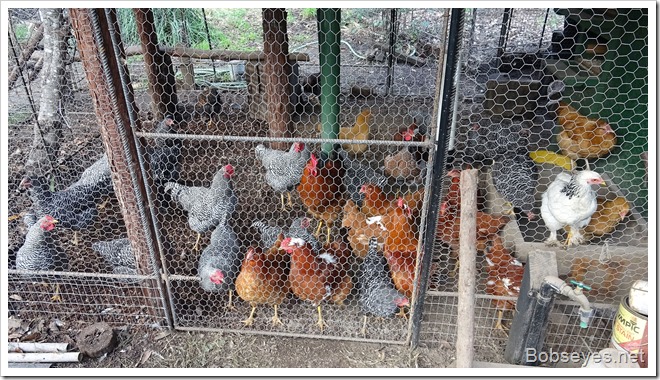 They always head right to the raspberry patch first as that’s where the best stuff is. 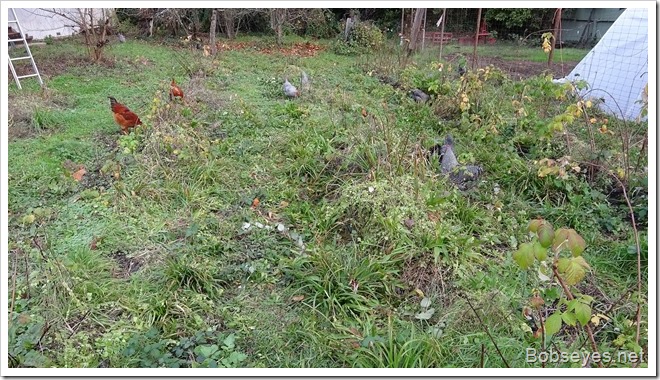 While the chickens were grazing away I worked on cutting up my kiwi bushes some more.

I got it this far yesterday. 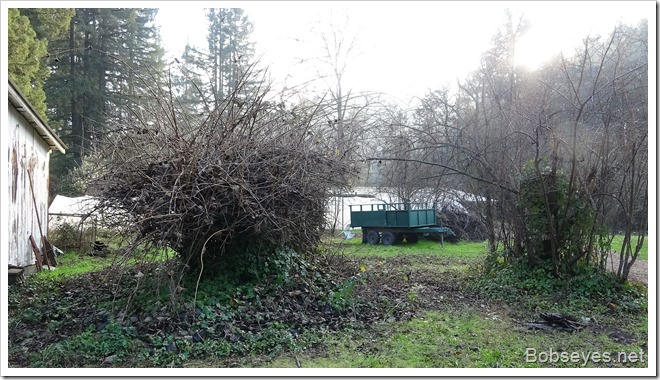 Don’t have to pack it off

I decided to cut the bush up into small pieces and leave them for mulch. Of course it takes a lot longer to cut all the pieces up into small pieces so it’s going to take a bit of time to get it all done. This way I don’t have to pack it off to a brush pile as I can just use it where it is.

I got it this far today. 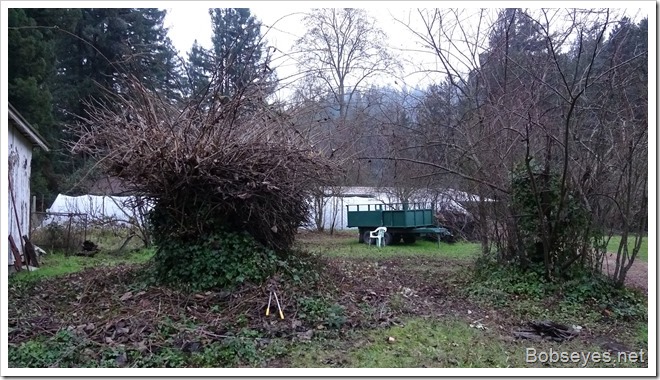 Around 5 the chickens went back to their pen to roost for the night. That also meant it was time for me to go in for the night which I did.