Cutting and Moving a Big Log Off the Trail, Carefully

I had cooked up the chickens a big pot of goulash, chicken broth, crab shells and food scraps and flour, and put it in their bowl and fed it to them this morning.

They seemed to like it, something different for a change. 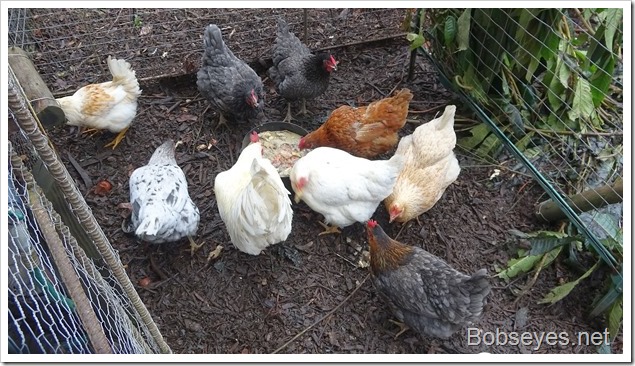 Headed up into the hills

It was supposed to rain again tonight but so far it was holding off for the day. That meant I could go up into the forest and do some work and get some exercise.

I got my chainsaw sharpened up and gassed and oiled and on the quad runner. 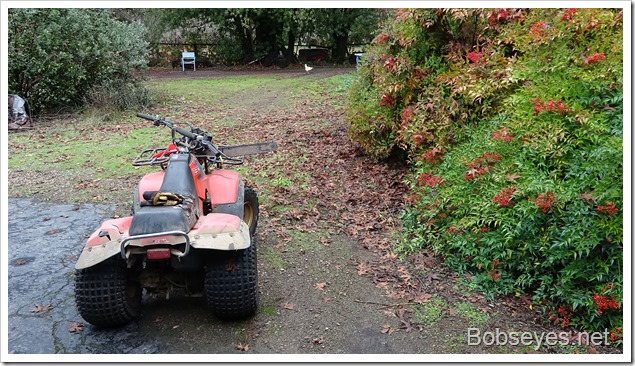 I rode on up where I was working on the trail and got ready to cut a section out of this log where it crossed the trail. It had fallen down a number of years ago. 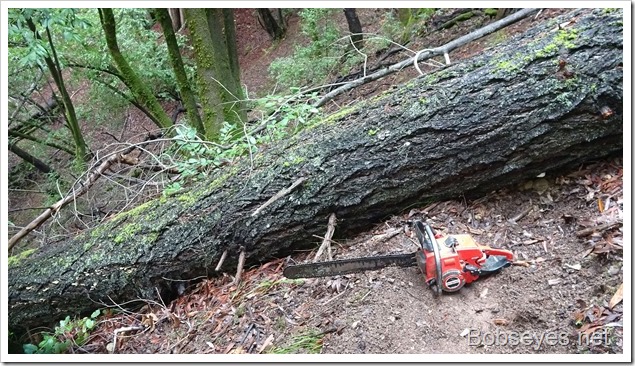 I had to be careful as it was a big log and heavy. I’d be able to move it only because it was on a steep hill. I started the first cut on the upper side. 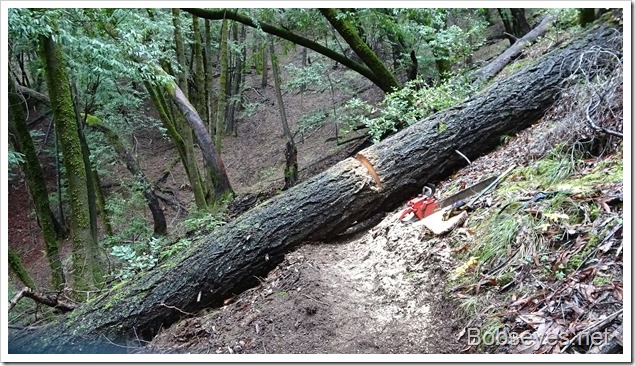 And carefully cut it through and it popped up a bit which was good. 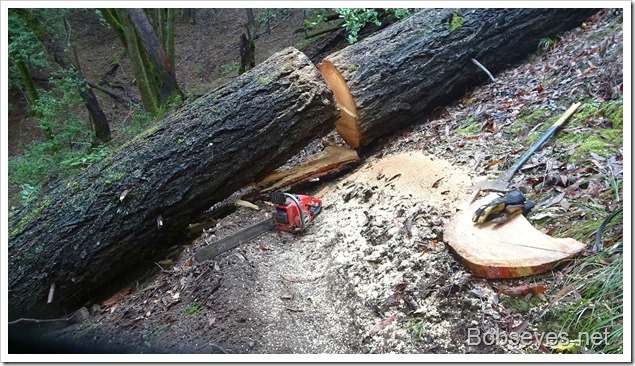 I stuck this piece of wood under the log to give it something to slide on when it got cut and lucky I did. I didn’t want the log to get stuck on the ground so I wouldn’t be able to move it out of the way. 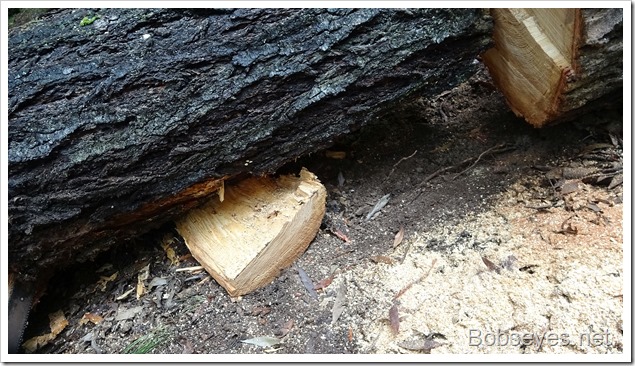 When I cut the bottom part, the chainsaw got pinched and stuck when the cut, cut through the log so now I had to free the saw. 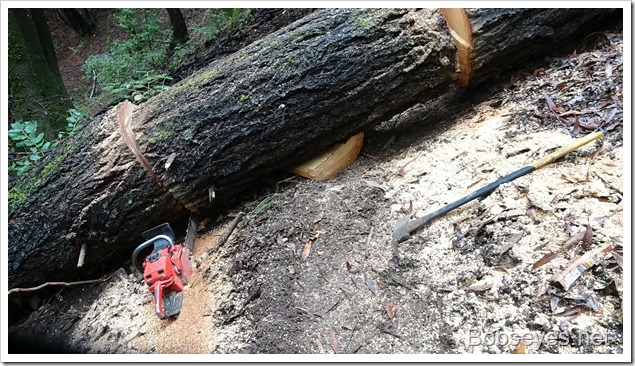 Got the saw freed up

That’s when the block of wood I stuck under the log came into play as I was able to just push the upper part of the log and it moved this much so I could get the saw out. 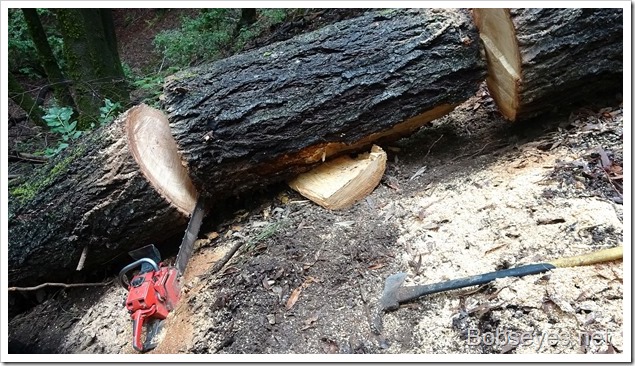 But now the log was hung up on this little smaller log. I was able to get in there carefully and move that little log and when I did, the larger log started to go down the hill pretty fast, but I was off to the side of it and it sped past me safely. 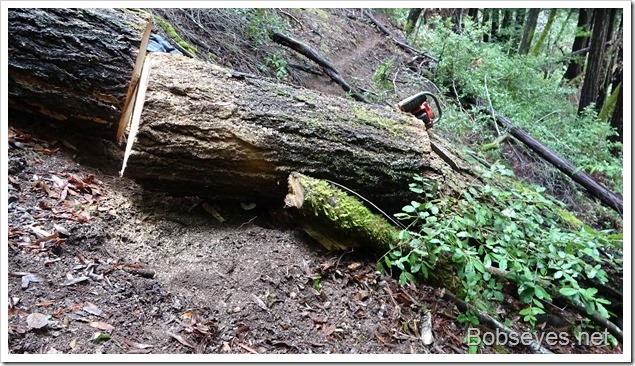 But now the six foot piece of log I cut was stuck here, just barely, and it needed to get pushed down the hill, just for safety. I was thinking I could lay down on my back and push it with my feet, so I tried that. 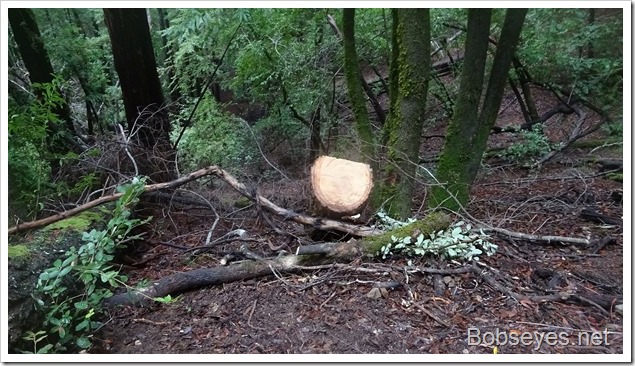 Gave it a good push

I was able to give it a good push doing this, only because it was on a steep hillside. I did have to put the camera down to accomplish that. 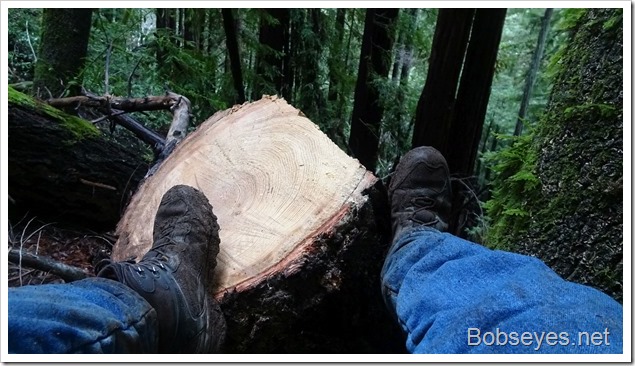 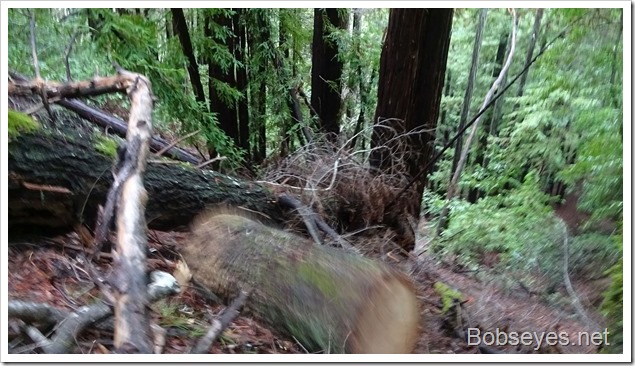 With the log cut out, it looked much better. 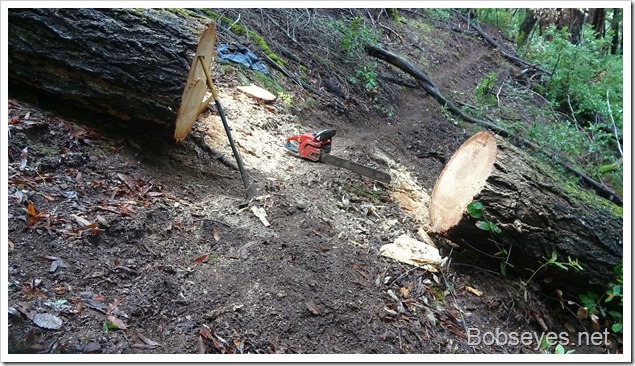 Cut these logs too

Compared to that log, these little guys were a piece of cake. I got them cut out. 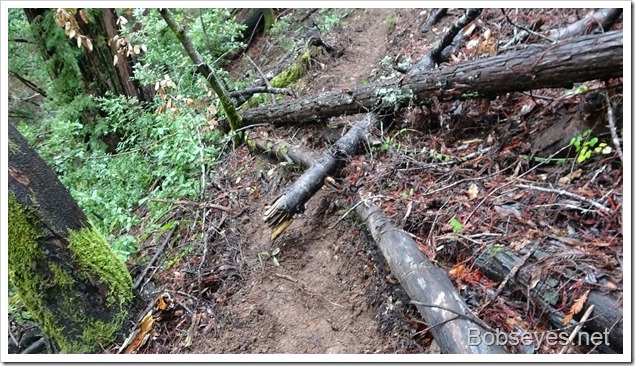 And I worked on the trail and fixed it up after getting those smaller logs out. 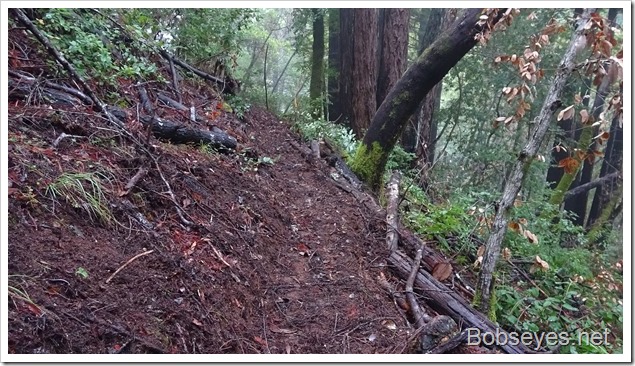 That was enough work for one day so I picked up my saw and rode on home.

At least the weather guys were right and the rain held off until after dark.

(Visited 111 times, 1 visits today)
This entry was posted in Uncategorized and tagged cutting a big log, trail work in the forest. Bookmark the permalink.

2 Responses to Cutting and Moving a Big Log Off the Trail, Carefully