Cruising Around the Jarbidge Area

I entered the town of Bruneau in the evening. I went to the library to check email and then decided it might be nice to do an evening wildlife ride. I had about a two hour or more ride from Bruneau to the main Jarbidge road to do on a road called Three Creeks Rd. It was mostly grass land so I thought it might be good for viewing some evening wildlife but I was wrong.It turned out that while I was up in Oregon a big fire burned through this area and blackened both sides of the road for miles.

The fire was huge that went through this area. I heard it burned about a 100, 000 acres. It was a nice ride otherwise. 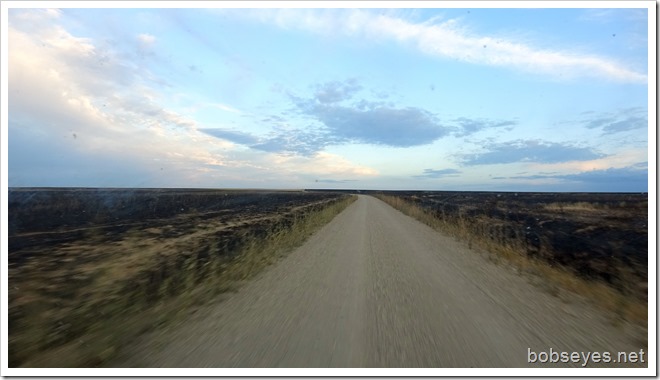 This was the only animal I saw before it got dark. 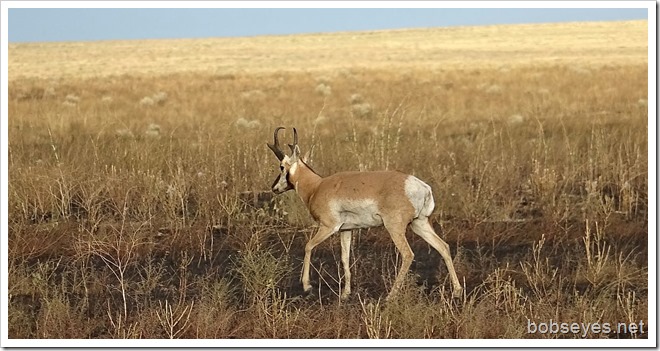 Pulled over to camp

Eventually it got dark and I had to find a small side road to pull into to camp for the night. There’s not much traffic on that road I think I truck came by during the night.

The next day I got it going and saw a sign that said Bruneau Canyon Overlook about four miles so I drove on out to have a look see.

The Bruneau canyon is nice but I think the Jarbidge Canyon is nicer where it leaves the road at the boat launch area.

Looking down the Bruneau River Canyon from the overlook. 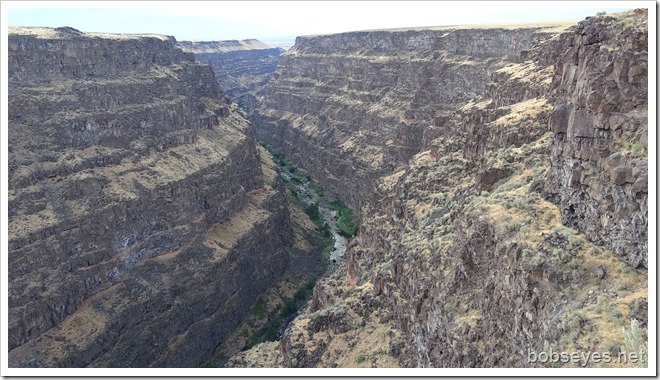 Back on the Three Creeks Road I passed by quite a few cowboy trucks with trailers for their horses. They were out checking up on their cows. 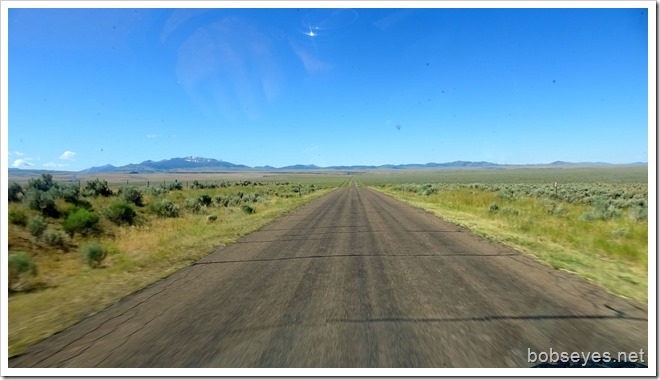 I stopped at the boat launch area on the Jarbidge river on the way in. Here’s looking down the canyon. I think they flout this river early in the spring so there’s enough water. Looks like good fishing. 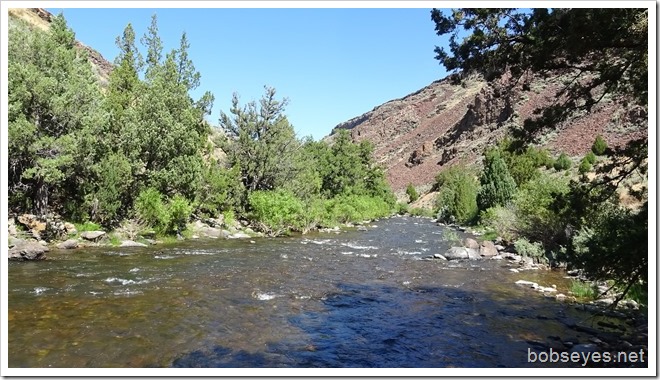 Just as I got back on the road from the boat launch a pickup truck came down the road with flashing lights and said he had four of these big trucks behind him scattered out. I said thanks and pulled over and waited for them to pass which took about 15 minutes. I thought that was better than having to back up for them. 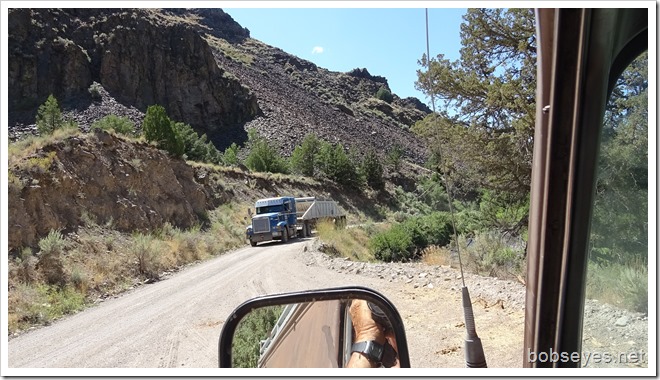 I continued on up the road to Jarbidge. 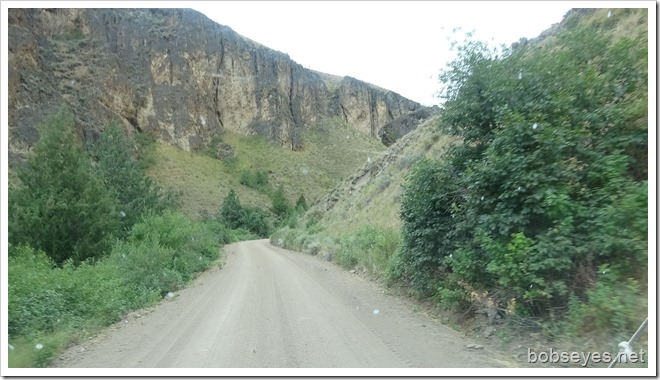 I always stop at the dump on the way in to dump of course and the price is right, free. 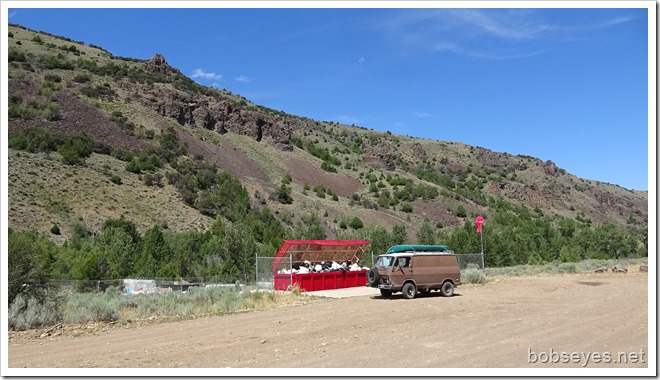 This looked like a neat  machine. There’s some heavy duty mining going on in the area that just started up a couple years ago. 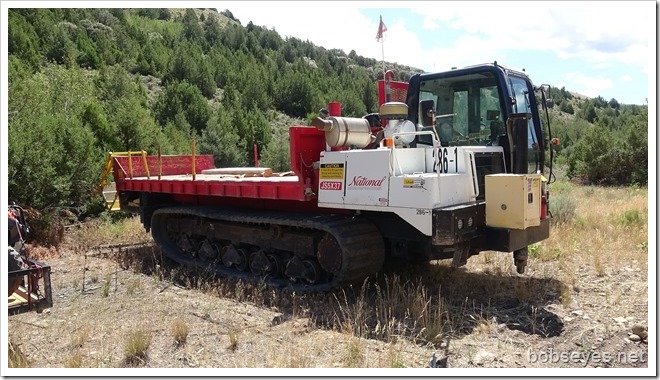 I continued on the road to Jarbidge. It’s fairly rough and rather long, a lot of it 20 miles an hour. 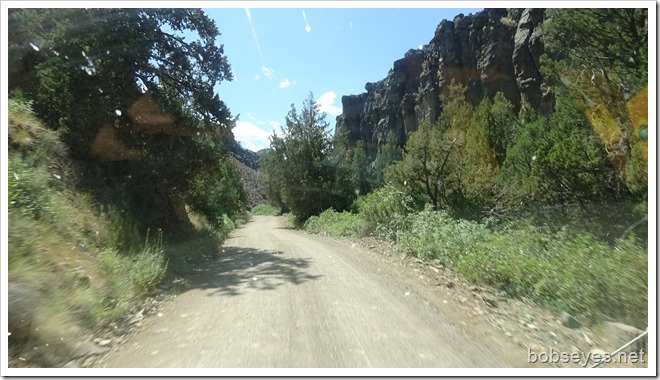 I drove on into town and drove on through it than turned around and came back to the bar on the left to stop and have a look for Jenny. 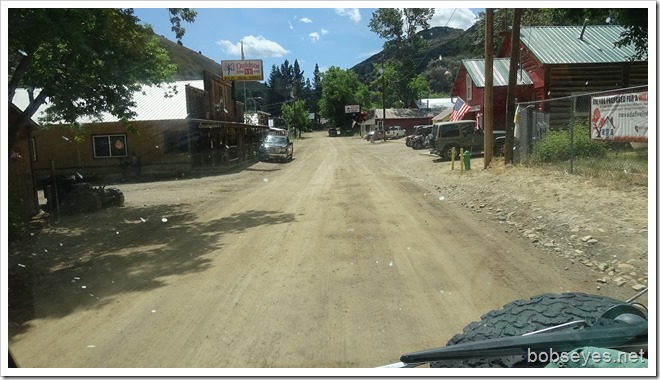 Here’s the bar where Jenny in comments said she once sighed her name. I looked but there’s names everywhere. 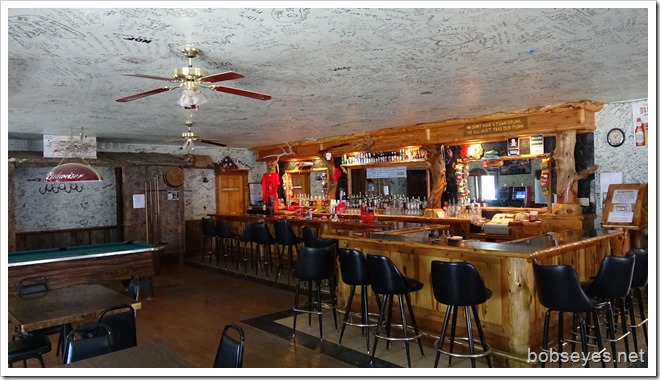 A small sample of the name signing, sorry Jenny. I also remembered the bar burned down a number of years ago and was rebuilt so Jenny’s name is gone until she gets back there to sign it again. 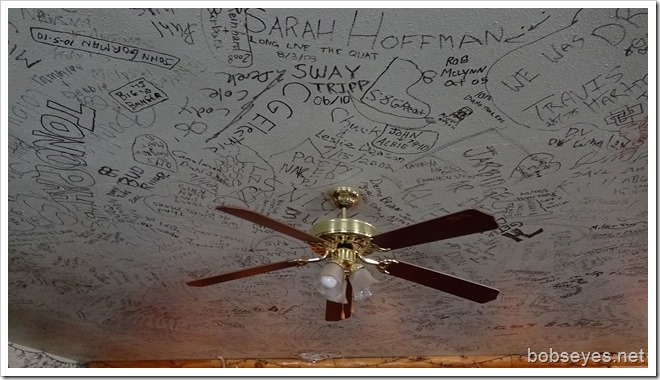 Next I drove over to the Trading Post where I usually stop to shot the bull with Ray, but Ray died a couple years ago. I stopped in anyway to see if there was still any bull left in the place. Cindy took it over and expanded the store quite a bit but there wasn’t much bull to be had there so I drove on out of two. 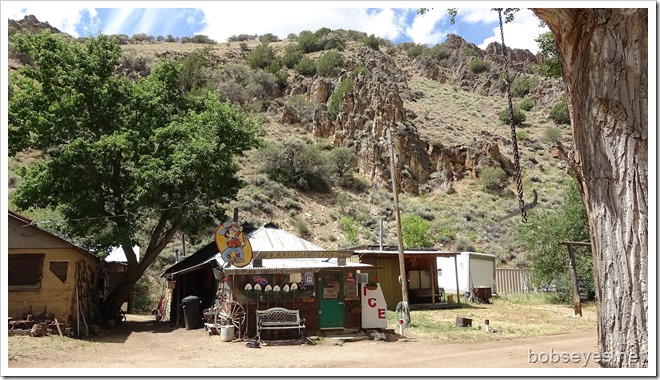 On the road out of town you come to this view of the rocks with the hole in the one there. I was told by a local there is old Indian writings there on the back side but I’ve never checked it out yet. 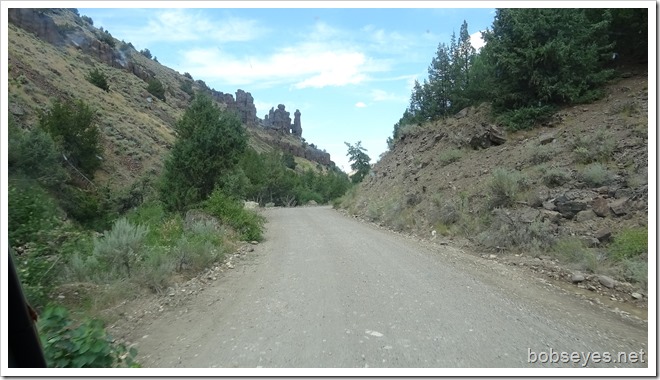 I made my way to this ranch, Buck’s Ranch also known as the Diamond A ranch which is their brand. 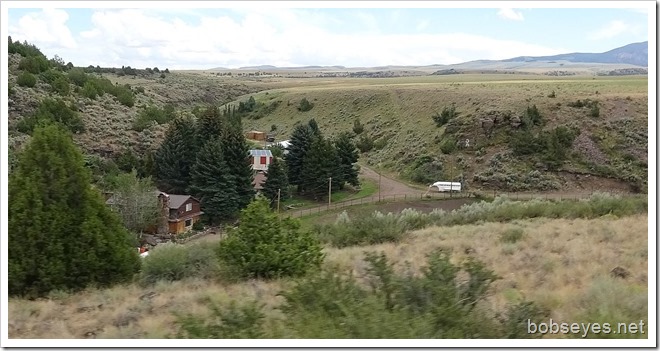 I was hoping to visit with a little five year old girl here, but she was out on the trail with her Dad. I did talk with Jackie,  her Mom for a bit. 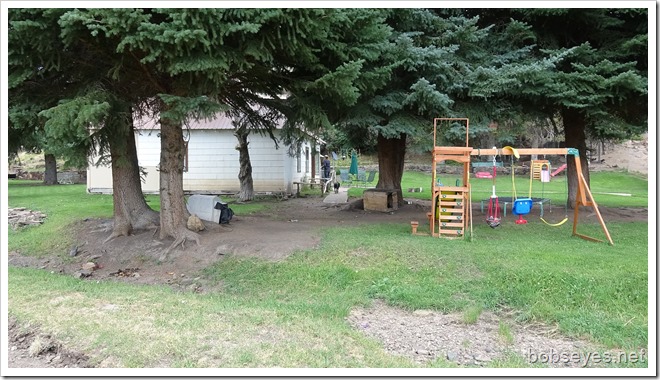 I’d never heard of this

Her Mom told me about a big Indian face painted on a rock on the road out of Jarbidge I hadn’t heard of before and showed me some pictures of it. It was about six feet high and very well done. I guess I’ll have to look for it next time I’m driving down that road. Look for the big x on a big rock.

She was taking care of a sick horse so I left her at it and drove on down the road as the day was still early. 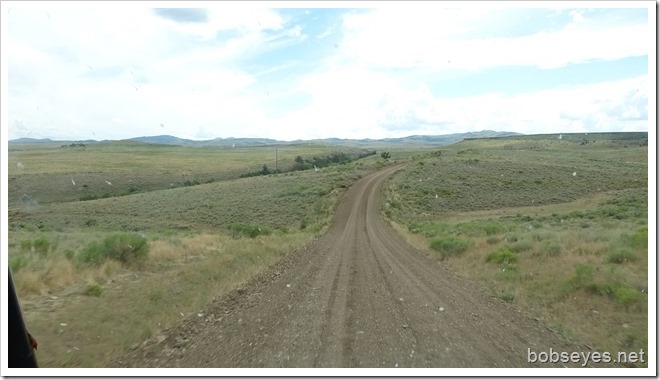 I stopped here for a break for a bit. 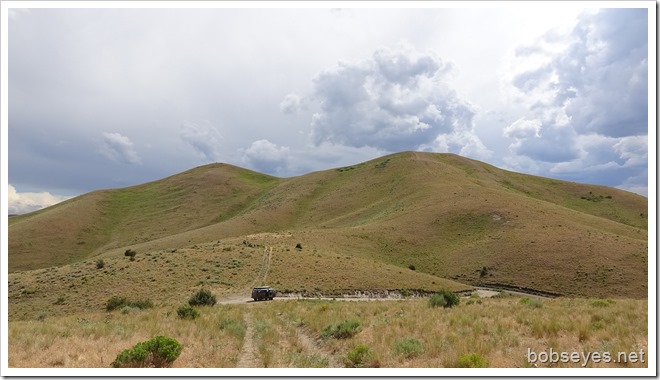 The road winds through some nice country, high desert. 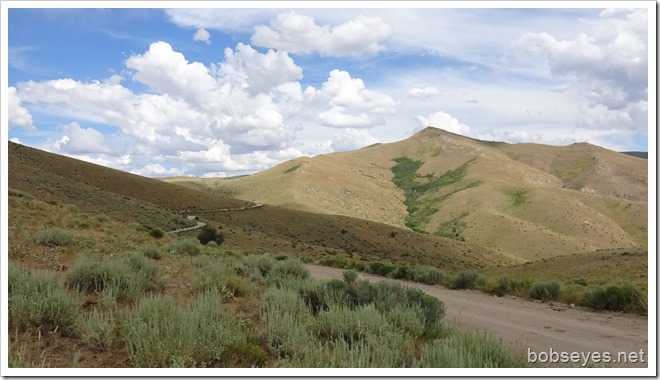 Around 4 PM I was close to my camp spot when it started to rain with lightning and thunder just as I was coming up on Sunflower Flat which is up on the mountain tops. 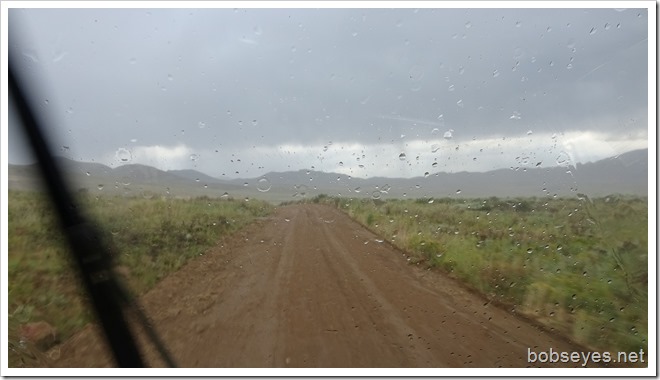 That turned out to be an evening rain shower and it only lasted about a half hour or so and it stopped.

Here’s the view out my side doors of Sunflower flat. 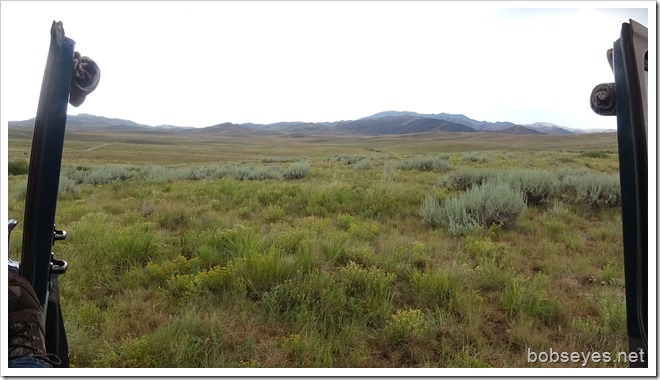 I walked around my camp spot just before dark. 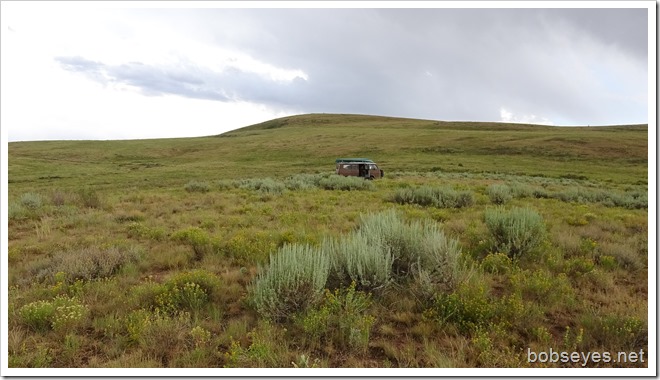 Lots of lightning during the night

Once it got dark the lightning and thunder started all around me but mostly far off. I could see a long ways in all directions being up on top like I was. The lightning flashes continued until about midnight when things settled down for the night.

I always enjoy the drive through this area. Nice day, nice camp spot.

2 Responses to Cruising Around the Jarbidge Area