Coop Roof Extension and Working On the Toyota’s Brakes

My goal today was to get the Toyota’s brake shoes on but when I went outside it was overcast and where I was working on the brakes it was a bit damp so I needed to wait awhile for things to warm up a bit.

That meant I could work on something else for a bit and that something else was to extend the chicken coop roof I was working on the other day which I decided needed to be longer so I could put  the smoker under it too which is sitting there on the left. 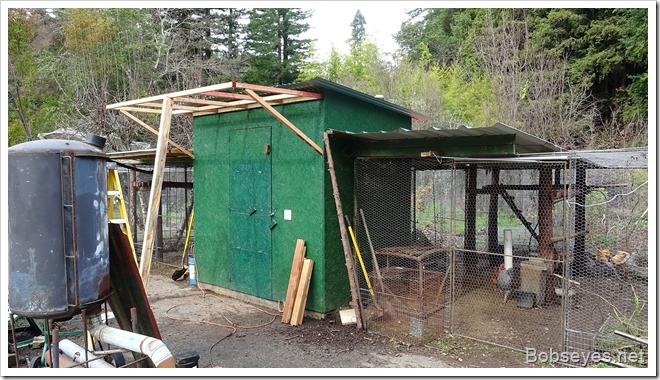 Luckily I used screws to put the thing together so all I had to do was unscrew everything and make the frame longer.

I stopped for a bit to go over to my brother’s and raid his cold room for some veggies to make up a pot of vegetable soup. I found a split cabbage and some broccoli pieces he’d set aside as they had some defeats, not fit to sell but plenty good to make a big pot of soup. Cost zero, except for the heat to cook it up and real yummy too.

I set those aside to cut up and cook tonight and went back to work on the roof project.

Here I’m extending the roof frame to eight feet from the 4 feet I had originally. 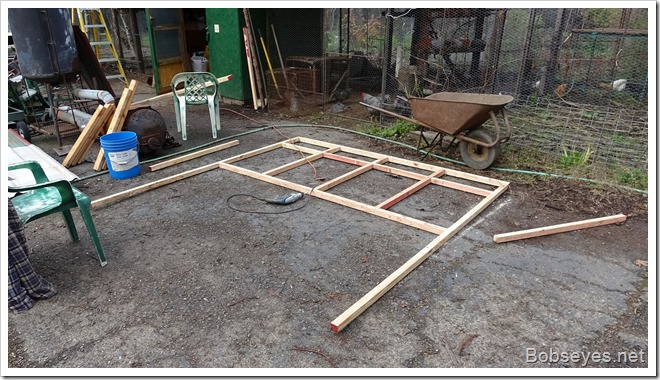 I have the frame extended and ready to put back up on the front side of the chicken coop. 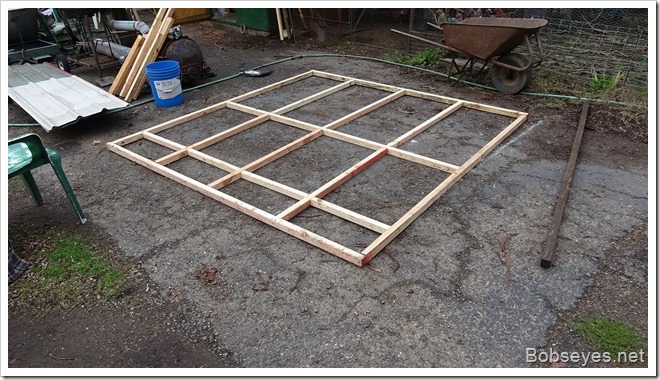 It took a little doing to get the heavier frame back up. I used some little blocks I screwed up first then pivoted the frame up on the blocks. I  had a support pole ready to go to hold up the end until I could get it screwed to the coop side. 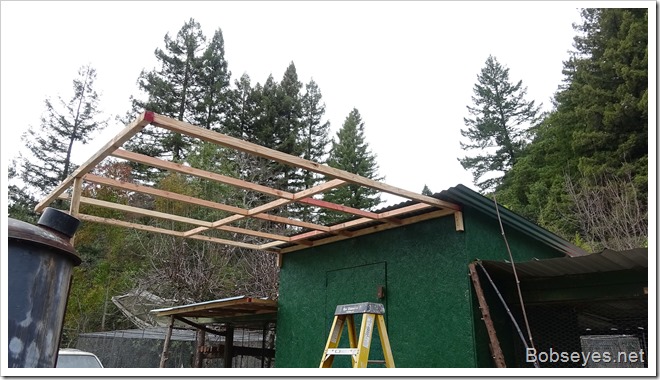 The roof frame is rather light but it doesn’t have to support much weight as the metal roof is light and we don’t get much snow around here. But to make it stronger I put some supports under the end of the frame and pushed it up past where it would be when I took the supports out. Once I screwed down the pieces of metal roof it makes a sorta box which is pretty strong. At least that was the plan. When you have to build things heavy then you also have to support the heavy so by building things light you can build things light. Makes sense to me. :O)

I put one piece of metal roof up and screwed it into place and sealed up any holes in it with silicone. 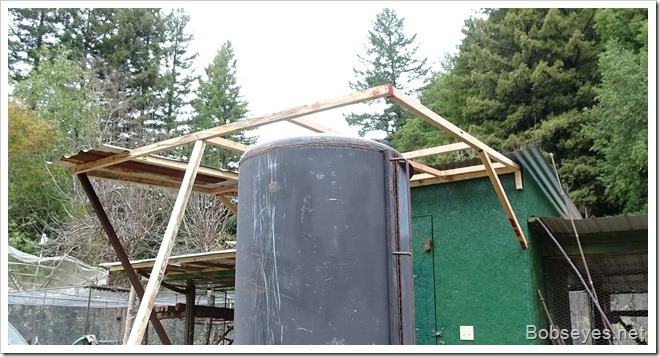 Working on the Toyota’s Brakes

Surprisingly the sun came out a and warmed up my Toyota work area so I needed to get to work on the brakes. I’d decided to at least try to get both back brake shoes on.

Here’s my work area where I’m getting ready to install the new brake shoes. 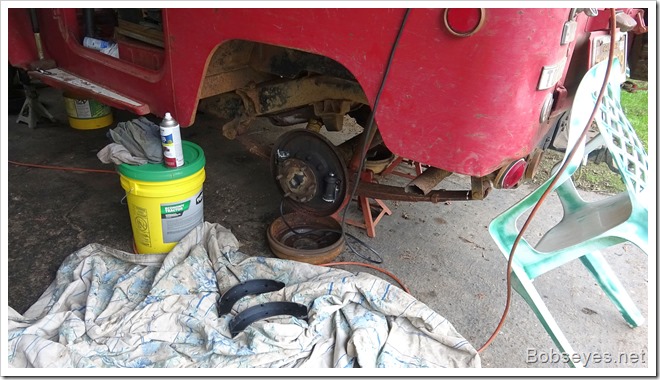 I cleaned up the unit and put the springs on the shoes and put them up there but they seemed to want to come off because the springs were pulling them off. Something wasn’t right but I wasn’t sure what. I sorta put that one together and decided to do the other side and see how it goes.

While doing the other side I realized I needed to turn the springs around so it pulled the shoes into the backing plate so I did that and things worked out much better so I went back to the first one I did and made it right. I thought I was going to have to look at the service manual but not now.

I still have to adjust the brakes and install the front ones too, but getting that much done was at least something so I was pleased as I’d like to get the old beast going soon.

As always the chickens were squawking to get out to graze so I went over to let them out as it was time. 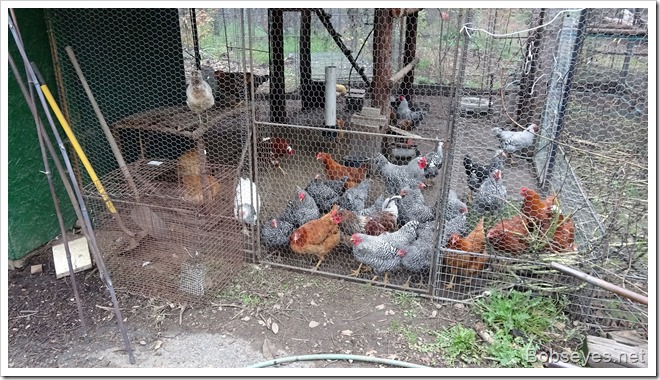 I’ve let them out often enough now where I’m feeling a critter isn’t going to get them and they seem ok so I went back to work on getting the rest of the chicken coop roof up.

It was almost dark when I put the last screw in and looks like this. 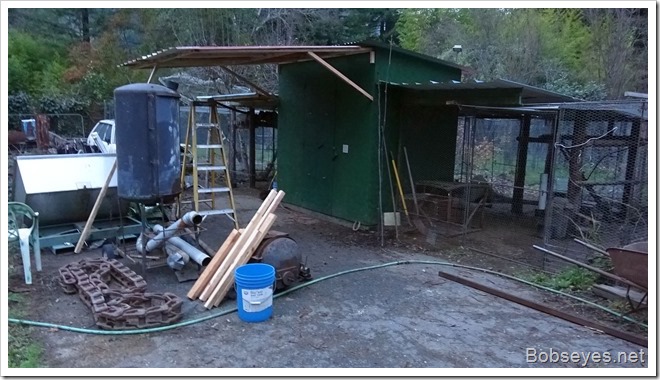 Stronger than it looks

I took the temporary supports out and checked out how sturdy it was by hanging on the end of the roof. Not bad, stronger than I’d hoped. 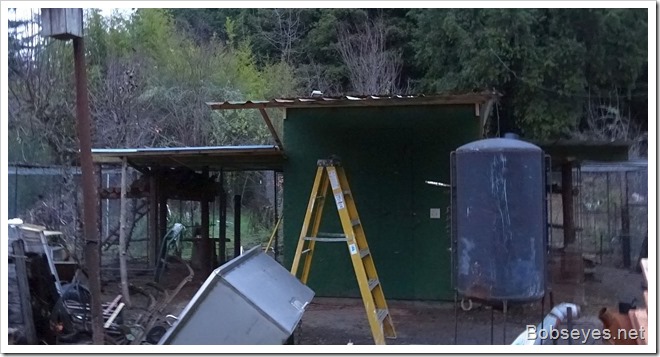 I may add a couple redwood tree poles to the corners eventually if I think it needs it and it would give the place more character.

Glad to get that project done. Let it rain.

The chickens all came in and I closed the gate and gave them all a pat and went in for the day.