Yesterday was a lost day

Yesterday was one of those lost days. I didn’t sleep well until morning so didn’t get it going until two. This was my third day on a food fast so I had no energy either, so I got up and then had a nap. I really wanted something to eat, but I resisted until today and pigged out early this morning. I‘m trying these short food fasts to see if my system might change a bit from the corn problem. Only way to find out is to try.

I find that after fasting for a few days, anything sounds delicious, even anything I might be tired of eating so that’s a good thing. :O)

I was hoping to feel some difference how much my body itches from the corn stuff, after fasting, but I don’t think there was much difference, maybe a slight improvement.

So my plan for  now is to fast for a few days, then pig out for a few days then fast again,  hoping fasting becomes a bit easier in time. My biggest problem doing this is keeping  my weight up as I’m not trying to lose any more weight, I’m slim enough.

I get to eat

Anyway, after eating early this morning and then going back to bed for a bit I got it going around noon. I went outside to see how the day was and  it was clouded over which blocked the sun and it was cool in the yard, so I decided to go on down to Jenner to kayak for the day.

Drove to Jenner to yak

I dressed warm just in case and drove on down to Jenner and put my boat in the water.

There was some sun out and the wind was down, but there was a cool breeze off the ocean. And when the clouds covered the sun, it was a bit cooler.

I paddled up stream along the south side of the river going by this big redwood log. Actually I pulled in behind it for a break and to sit and watch for a bit. 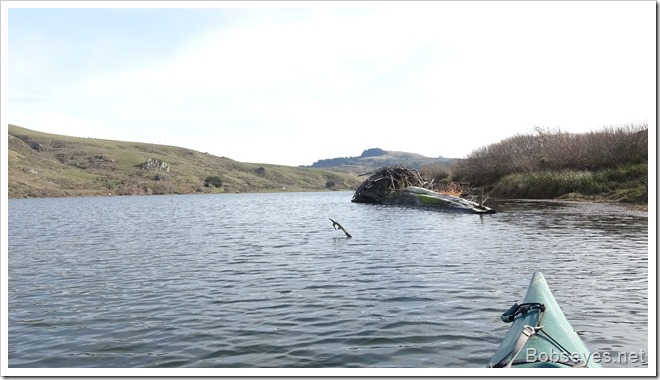 I paddled up the river about a quarter mile and stopped again in this spot and watched. There were a few birds out on the water, but not too much else. 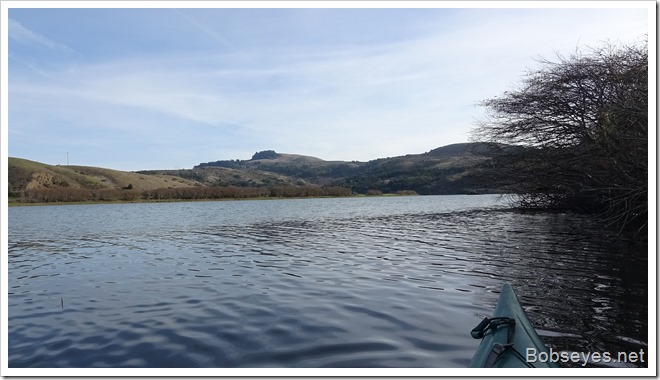 Turned around a Muskrat

I continued on up to Muskrat and stopped and rested and watched and after awhile I paddled across the river to look for birds on that side. 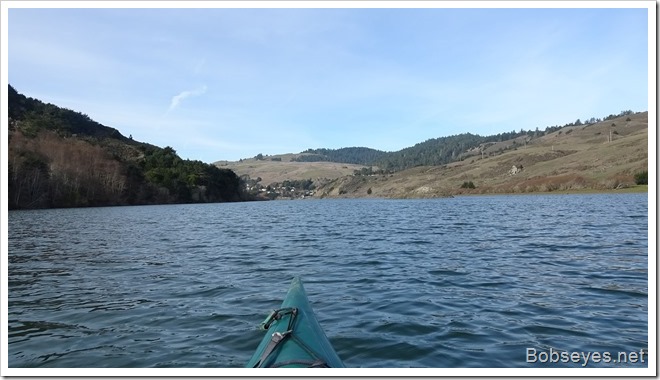 I saw these golden eyed ducks over by Paddy’s rock. 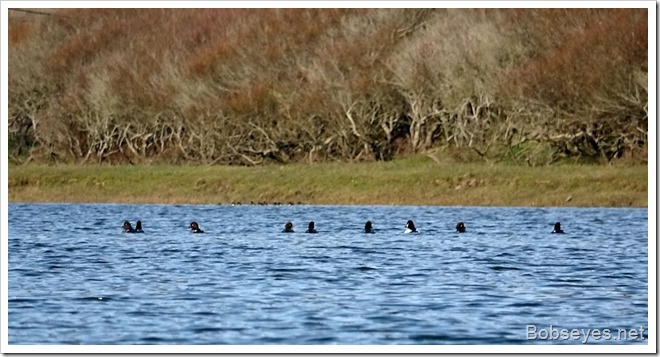 And I paddled by this grebe, there were several of them in the water. 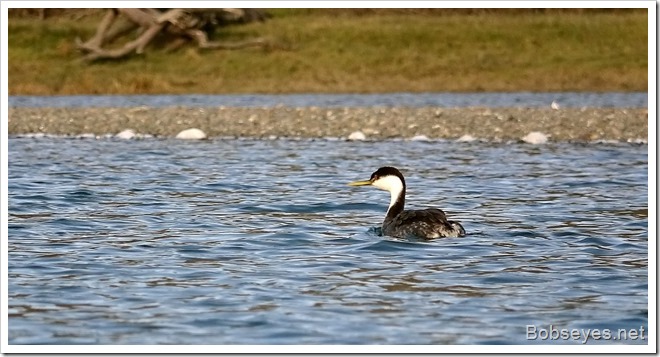 I continued paddling on down along the north shoreline and then started a cross over towards Penny Island and went by this pair of loons. 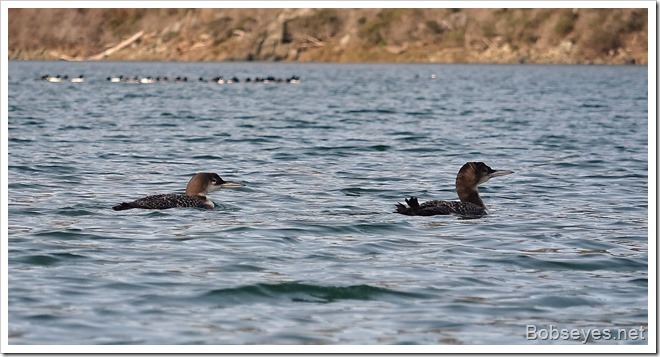 I’m crossing over the river to Penny Island, to the left. 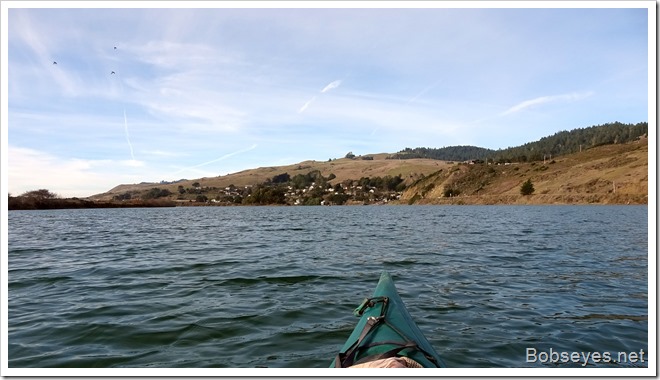 Penny Island is up ahead. I started down the back channel on  the left and entered the little channel on the upper end of the island under the big trees there. 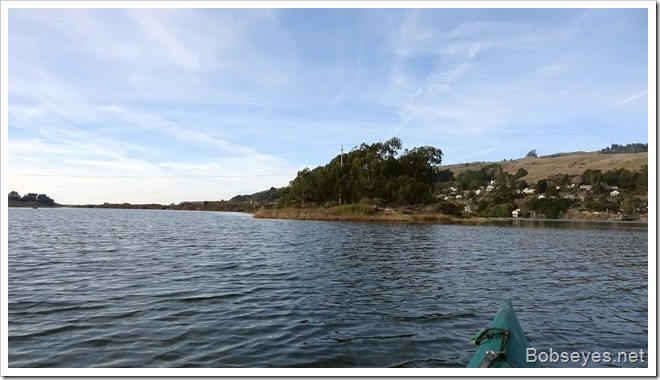 Here’s the little channel on the upper end of Penny Island where I pulled into and sat for a bit. It’s usually out of the wind and in the sun if there is any. Most of the  sun was being covered up by clouds now and I was getting chilled. 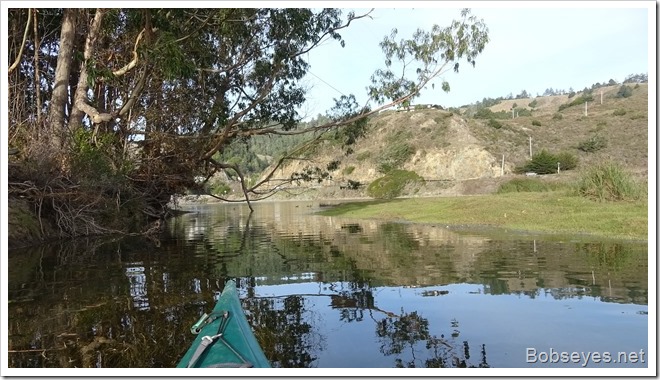 I thought I might head down to the mouth to see if it was open or closed so I started that way going by this pair of mallard ducks which were swimming around me to avoid me. 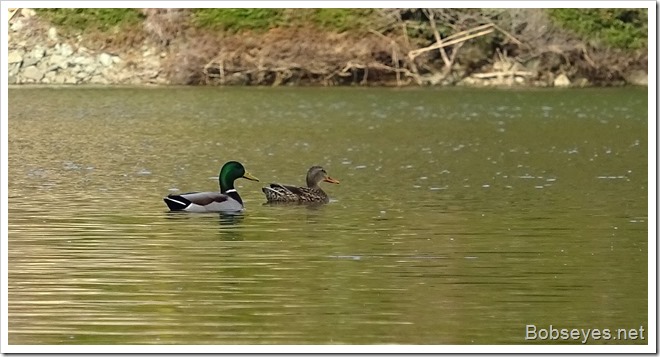 Go in or to the mouth

I stopped at this spot and was thinking of going in for the day. A bunch of coots were feeding out in front of me. 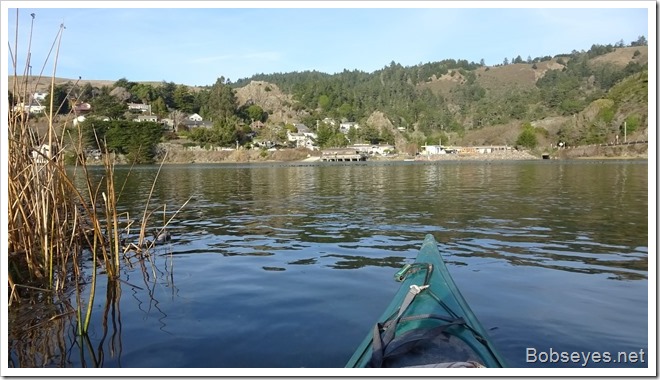 There’s the bunch of coots feeding in front of me. They like to eat the dead vegetation that grows under the water and is now dead. 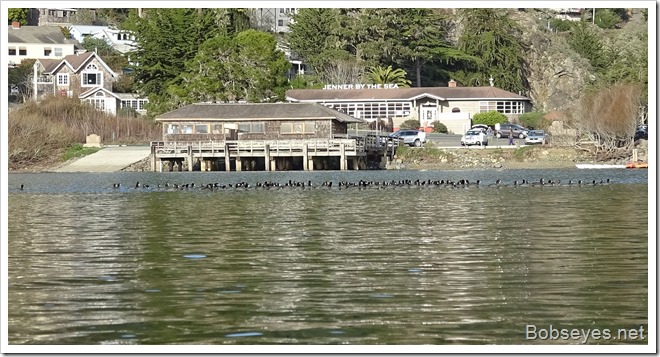 I paddled around the reed patch where I was sitting to maybe paddle down to the river’s mouth. The cool breeze hit me off the ocean so I pulled in by shore and took a photo down towards the mouth area. 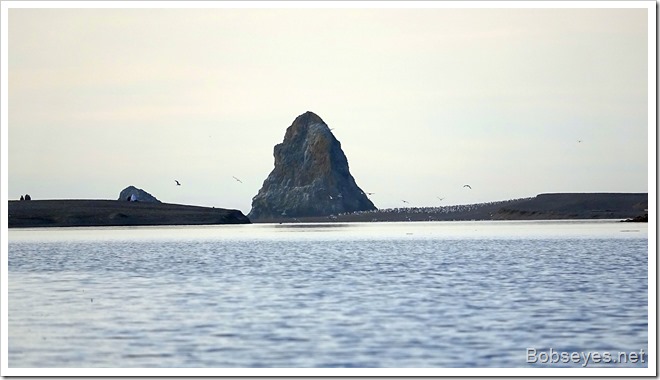 I can’t tell if the mouth is open or closed. It is either closed or almost closed as the water level didn’t drop when it went to low tide today, so I’m not sure what condition the mouth is in as I turned and headed in for the day.

By now I was chilled to the bone so I paddled on in for the day and went on home where I had some work to do.

So I’ve been thinking of another idea that came to me the other night.

The idea was to make a levered ramp that I could tie the motorcycle to.

I wasn’t sure if it would work or how long or short to make things. Metal stuff is much more permanent so a wooden model is better to make first to see what works and what doesn’t as wood is easier to cut than metal. 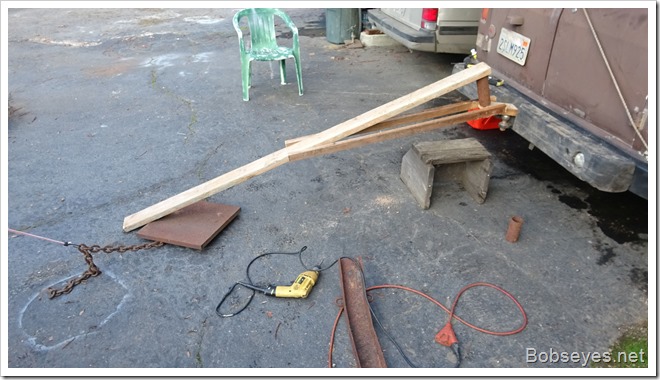 The unit will mount on the towing ball on the back of the van.

Here’s the going up position about half way up. All the way up the bottom lever boards will point up straight and support the unit in the up position, picking the cycle off the ground. 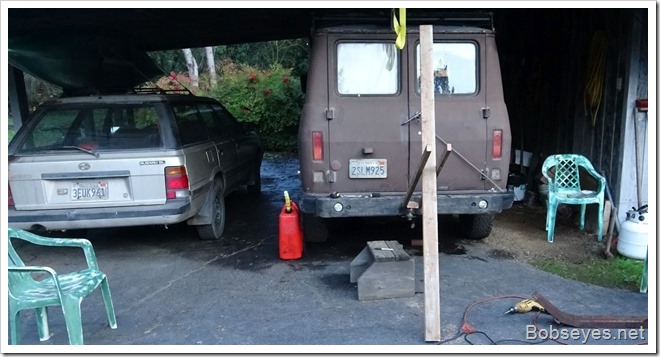 I fiddled and fussed with that for a bit until the day started to cool down too much.

This method has some possibilities that might work if I can work the bugs out like keeping the unit from hitting the back of my van when going up. I’m thinking I might need parallel lever boards to make the channel board rise up as it lifts to miss the van.

I have the hand winch I mounted on the upper part of the van to pull the unit up, but it might be able to be pushed up by hand. Only testing the actually unit will show whether that will work or not.

Working with the model

Anyway, now that I have somewhat of a model I can work with it and see if I can come up with something.

I brought some firewood into my house for the woodstove and that was it for me today.