Yesterday was a yuck day

Yesterday I woke up with a head. It not only kicked my butt but the rest of my body too. It’s been a very long time since I last had a cold. So long that I don’t remember.

I got it going and went outside and was feeling so poorly from this cold that I went to bed shortly thereafter. My fever broke around midnight.

I can barely move today

Today I got up and my back was hurting from being in bed so much and I had very little energy. I put a cold pack on my back which helped quite a bit and after went outside and chair hopped as that was about all I could do. Every time I moved to a new chair I was beat, so I didn’t move often.

I did easy stuff like turn the timers on for the water. 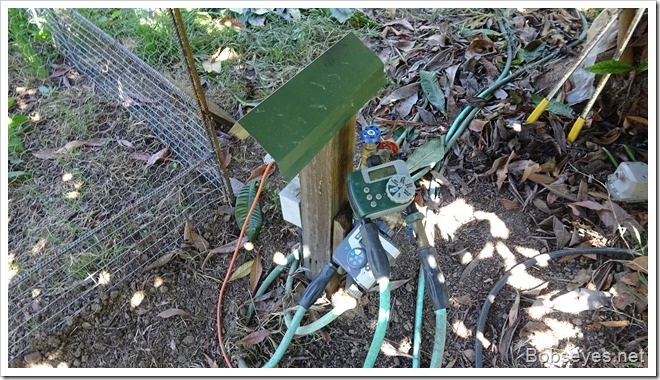 To water this area where a chicken enclosure will be and I did the other enclosures too, including my gardens. 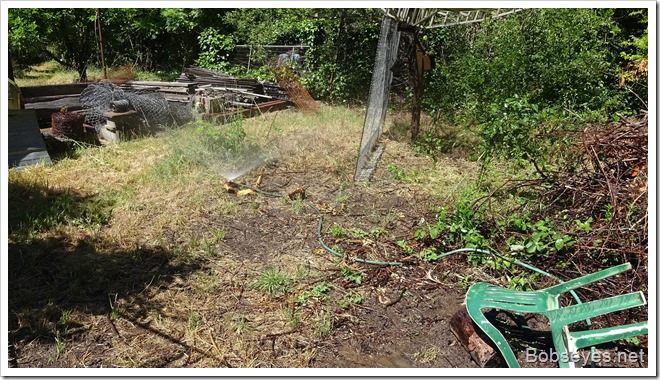 Cherries and raspberries are getting riper

I managed to get to my cherry trees and eat a few cherries. 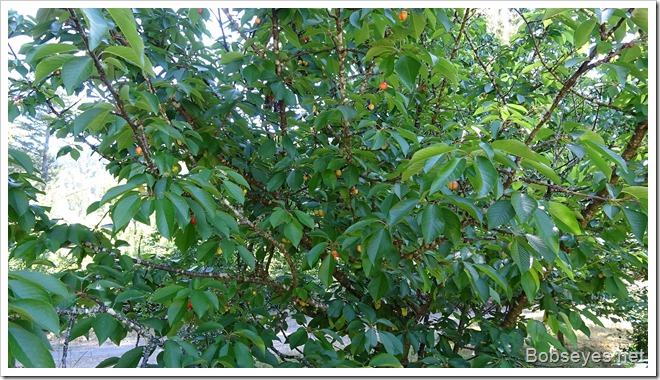 And my raspberries are getting ripe so I ate all of them that were ripe. 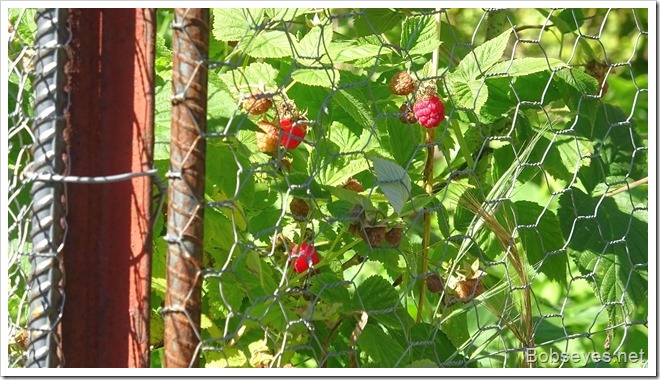 Around noon I was feeling a bit better but had no energy and I was hungry not having eaten the day before so I went in the house and got a bowl of soup and made a cup of coffee which seemed to perk me up a bit.

I wanted to plant some more seed in my garden so I got the seed out and some burlap, an old rice sack I cut up. 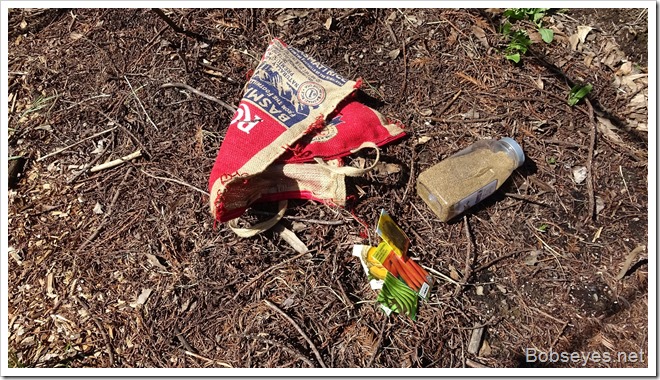 I saw my brother Tom using some burlap over his carrots to help start them by covering his seed with the burlap so I did the same. I also started some celery seeds in there too as they are very small like the carrot seeds. I can transplant them if they come up. Since the seeds are so small I mixed them with fine mulch dirt in the container and then  spread the soil out to hopefully spread the small seeds around and not get them too crowded. 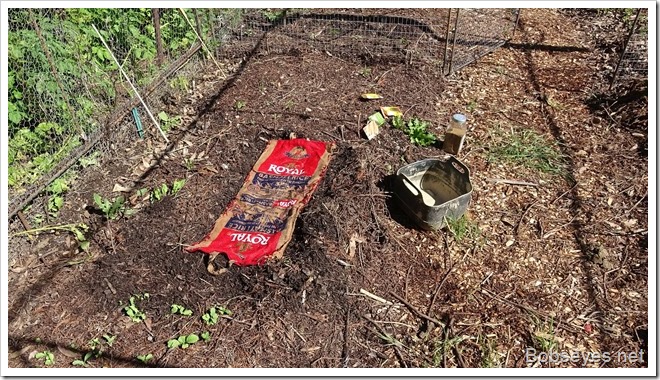 Eventually I’ll need some gas for the bike

After a good break I looked through my stuff for a gas container I can use to get some gas for my brother’s motorcycle since I’m the one that rides it mostly. I found a serviceable one that I will get filled in town next time I’m there.

I hopped on my brother Mike’s motorcycle and rode up into the redwood forest to have a look for some small trees I can use to make the chicken roosts in my runs as I’d like to use forest products to make them.

Looks like plenty of small trees in this area that should work. 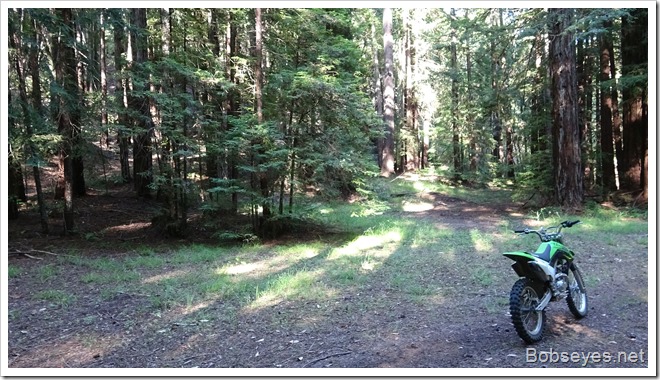 I rode the bike to the ridge top that overlooks the town of Guerneville and stopped for a break. 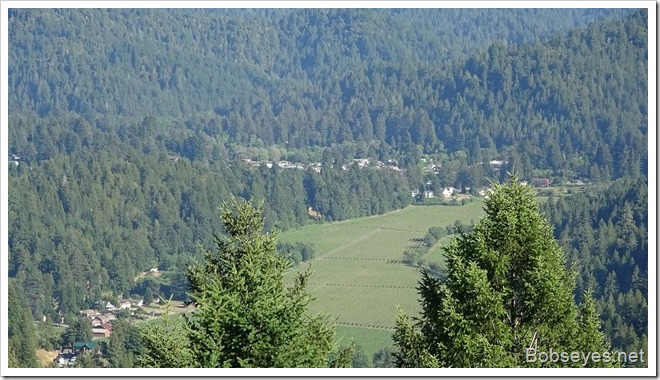 On the way down I stopped to check out the water level in our spring fed tanks. They were almost full. 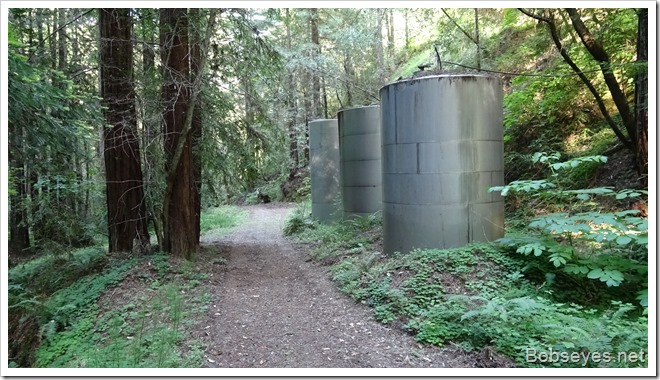 By now I was feeling quite a bit better although my energy level was still pretty low, but not near as bad as this morning.

I needed a hoe so looked around for the old one I knew I had, but couldn’t find it.

What to do about that hoe. I found an old broken handle shovel head that I thought I could cut off and bend a bit to make a hoe. I also found a broken shovel handle I thought I could attach to the shovel once it was a hoe.

So I marked the shovel for the cut. I tried a hack saw but found the shovel was a good one and it was hardened nicely so the saw wouldn’t cut. 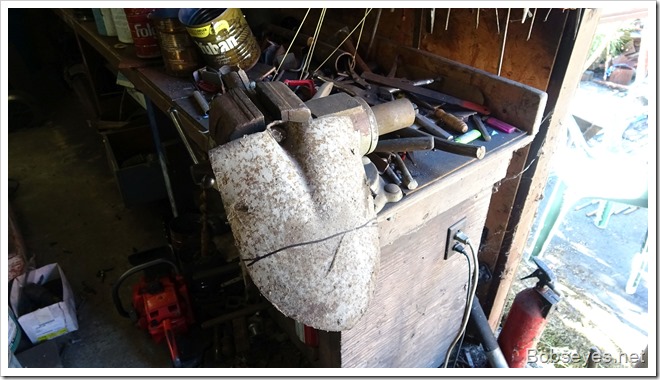 But my big disc grinder would do the job with lots of sparks and sharpen it nicely. No need for a perfect cut. 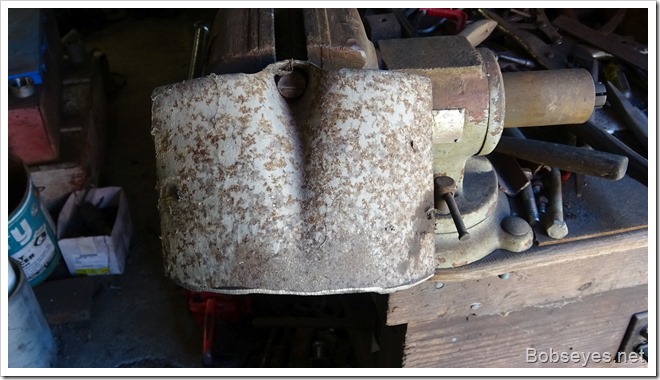 I had to bend the end a little to make it a better hoe and that wasn’t easy. I had to get my torch out and heat the hardened metal up to bend it but that did it. I used a quarter inch bolt to fasten the handle to the hoe. 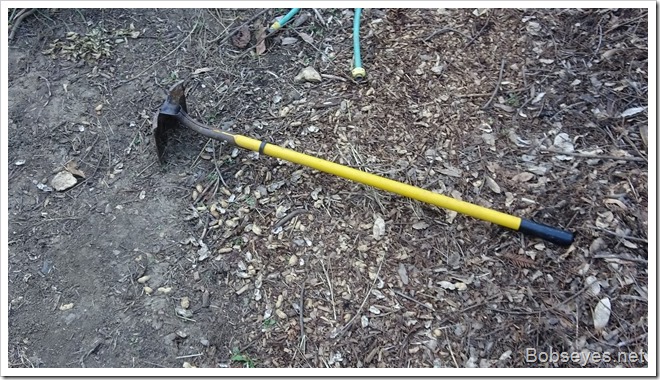 I tried the hoe out making a watering ditch around a tomato plant and it worked well. Now I  have to make something to auto water these plants. I need water in the ditch as the tomatoes don’t like overhead watering as they will split the tomatoes. 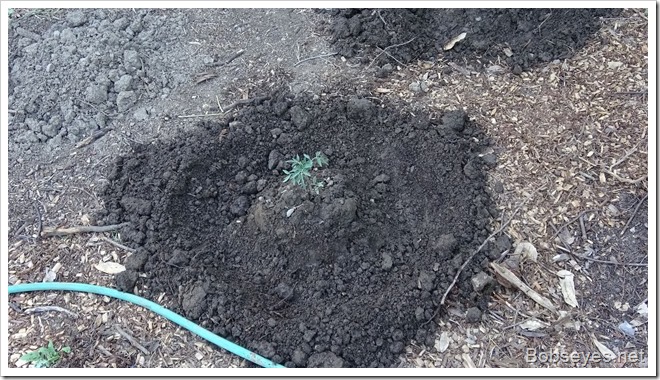 After that I chair hopped and visited the cherry trees several times before it got dark.