Cold But Worked On Projects Anyway

It’s not freezing, but it’s cold out

I went outside about noon today. Boy was it on the cold side, went right through me so I went back in the house and warmed up for another hour before I tried it again, expecting it to be cold this time.

I wasn’t really in the mood to work on stuff, but I picked up my tape measure and started putting things together. I first worked on the van’s motorcycle carrier design. I added the ramp on the left which is also the part the bike frame will be bolted to in the final design. 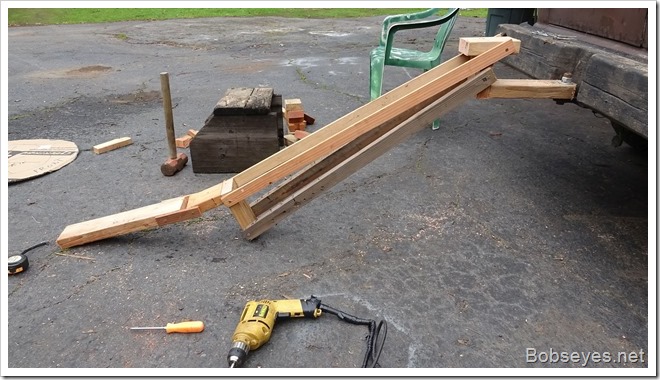 This is the part I added. It’s the part the bike will be bolted to under the bike. The final part will be quite a bit different than this part This part is just to get measurements and see what might work and what might not work. 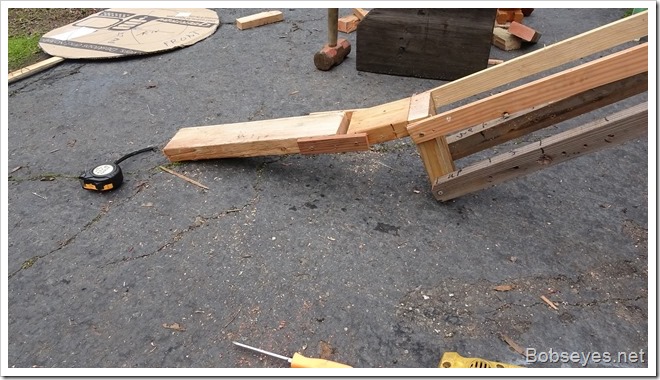 I mounted my motorcycle onto it and raised it up to see how it looked. Looks ok to me. 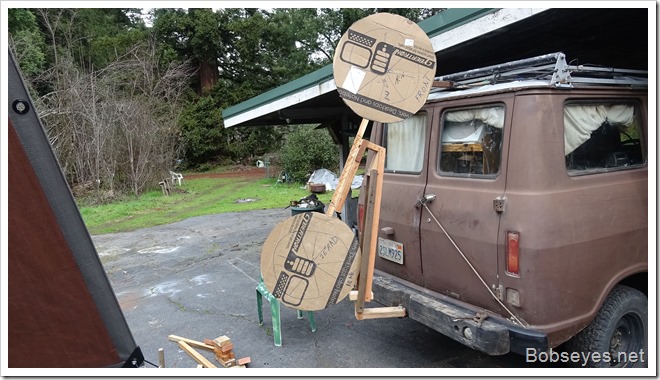 It’s supposed to rain a bunch so I put my  motorcycle away in the garage to keep it from getting soggy.

Gassed and primed the Toyota

The next thing I did was put five gallons of gas into my old Toyota Landcruiser’s new gas tank. I cranked it over to try to get some gas to the carb, but the pump wouldn’t prime.

After a bit of thought I found my brake vacuum pump and used that to pull gas to the carb gas line which worked like a charm. I then turned the engine over to see if the fuel pump would pump and it did so that was ok. I next pumped about a half pint of gas through the gas line to make sure it was all new, good gas..

I didn’t try to start it as I just didn’t feel with messing with that today.

Project for my brother

The next thing I did was take apart this motorcycle lift of my brother’s as it needs to be shortened an inch, so I unbolted the bolts and took it apart. It’s just a lift to raise the bike off the ground to work on it. 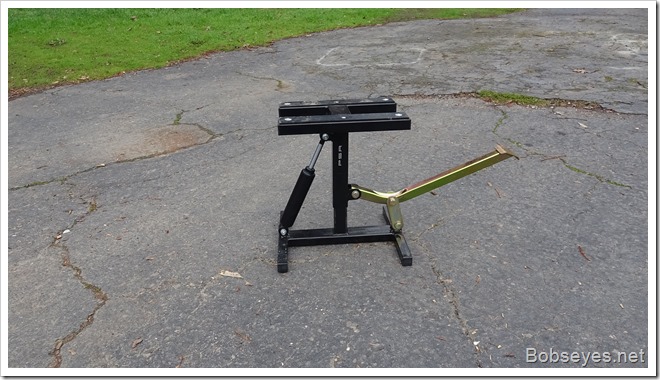 I next cut an inch off of the parts and now needed to weld it back together, but didn’t feel like doing that today either, so put it aside.

Tires been leaking for years

Back to the Toyota. It has a slow leak in one of the back tires I  haven’t been successful in fixing it so I needed to jack it up and remove the wheel so I can find out where it’s leaking.

I jacked it up to take off the tire. 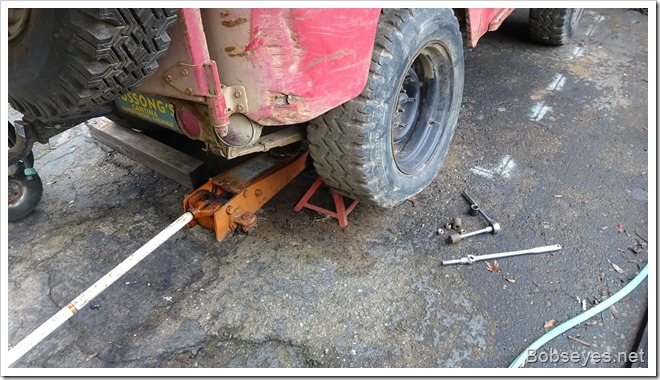 Looking for the leaks

Once I had the tire off, I aired it up to fifty pounds and sprayed it with a soapy water solution to find out where it was leaking. 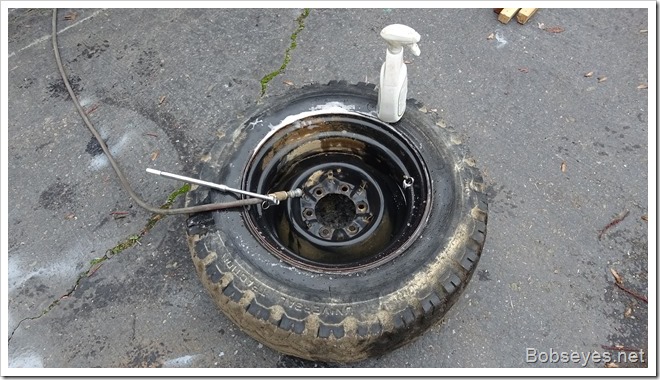 It turned out to be leaking where I thought it was around the rim which means I’ll need to get some sealer applied to the rim to stop it. 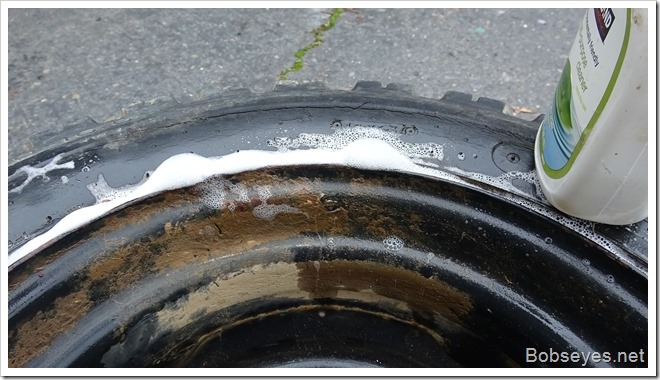 I also noticed the valve stem was also leaking which also needs to be replaced. I’ll be taking it down to the local tire guy to get it fixed up.

I wasn’t going to weld this lift up today, but I did anyway. It’s real thin metal and I wasn’t sure I could weld it up with my arc welder without blowing holes in the metal. I did blow some holes in it, but was able to fix it up so it will work. A coat of black paint and it was good to go. 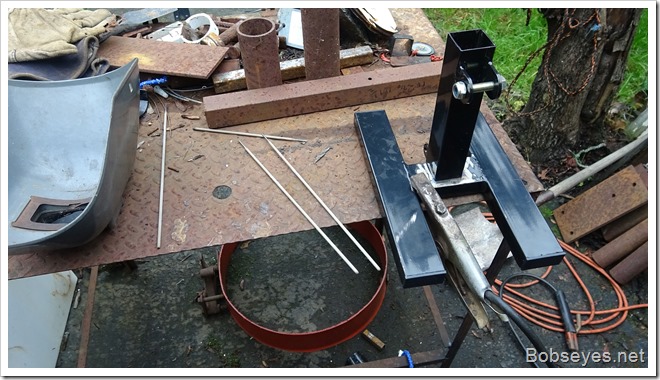 I went in the house to warm up after which I noticed I still had some day light to burn.

Pruning time of the year

It’s that time that all the fruit trees need pruning so I started with this peach tree with the pruners. 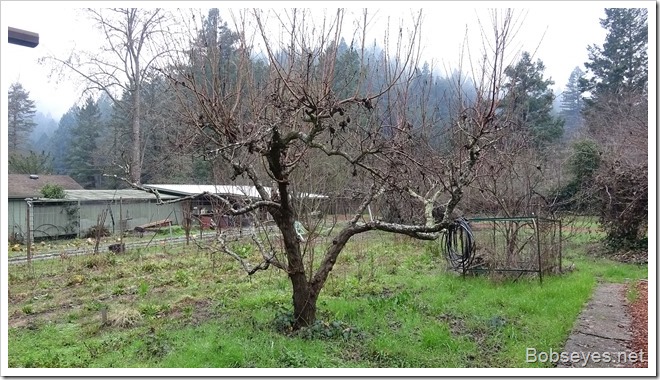 I trimmed all the big suckers off and thinned things out a bit and then even picked up the brush for the finished product. 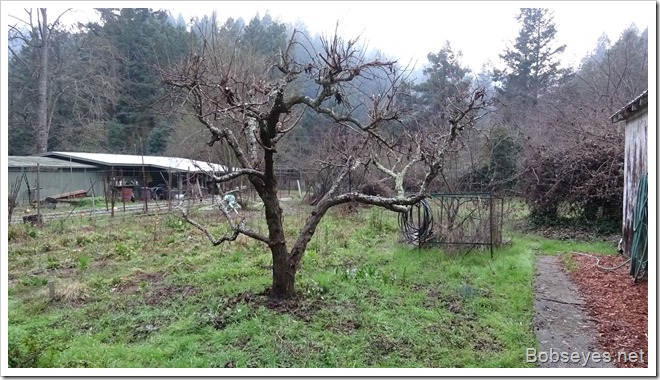 My back said it’d had enough

After picking up the brush and dragging it over to the brush pile, my back said enough for one day and it was cooling down some more anyway just before dark so I went in the house for the day.

That was my day, a fairly productive one.

1 Response to Cold But Worked On Projects Anyway