Clogged Radiator, Diamond A Ranch and the Town of Jarbidge

I stayed for another day on Bear Paw Mountain, as it was about 75 degrees with a good breeze blowing, better than the ninety degrees down a little lower. I just hung out and gave myself a haircut and enjoyed the day from the top of the ridge.

Check the radiator for seeds

Last night I was thinking I better check the radiator of the van to see if it had any grass seed plugging it up. The grass is about three feet high in a lot of the spots that I had to go through the other day and more than that,  as I climbed the hill back up to this spot I was watching my engine temp gage closely as it started to climb as I started up the hill. I know my coolant is good to 270 degrees before it will boil over so I know to stay below that, so my plan was to stop the van with the engine still running if I hit 260 degrees as I wasn’t real sure where exactly the boil over temperature was. And this is the first time I’ve had the van’s new V8 engine in some real heat so I wasn’t sure how things would do with keeping the big engine cool.

So as I watched the gage and climbed the hill the temperature kept, climbing almost getting to 260 degrees F. just as I was getting to the ridge top. It climbed to 262 as I let engine idle and very slowly went down to 250 where I thought it might be safe to shut down and it was.

So I opened the engine compartment and had a look and sure enough there was a couple inches of grass and seeds covering the radiator front  and now what to do to get them out?

I needed a good high volume air compressor but the compressor I carry is low volume so wouldn’t be of much help. I did have a little whisk broom so I got a tarp out to lay on and sweep back and forth getting a lot of the seeds off but there were still a lot of them stuck inside the radiator fins, so what now.

Of course I had a plan. I also have an electric fan wired in with the regular fan. If I reverse the battery connections the fan will blow out instead of pull in so I maybe could get some more of the seeds out by blowing them out the front.

So I looked in my tool supplies for some little wires to change over the battery polarity to the fan and was fortunate to find two little wires with female spade clips already on and that should do the trick.

Could use a big air compressor

I hooked the wires up and turned the fan on and it was blowing a lot of seeds out, so I worked the broom again while the fan was working and I figure I got a good deal of them out, enough to head on out and I would try to find someone with a big air compressor that would help me out. 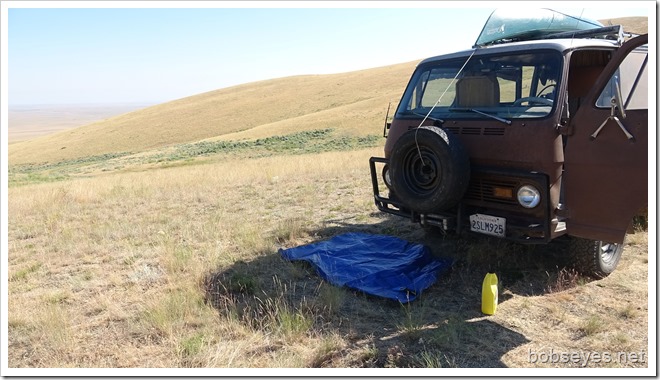 So once I got it all together and things all put back away I headed on down the hill and on to the Diamond A Ranch.

The people at the Diamond A Ranch

At the ranch I planned to just visit with who ever was there as the ranch is owned by a big corporation and it’s been changing workers lately, so some I knew and some I didn’t.

I also planned to ask to refill my water bottles there if they would let me and maybe use their air compressor. 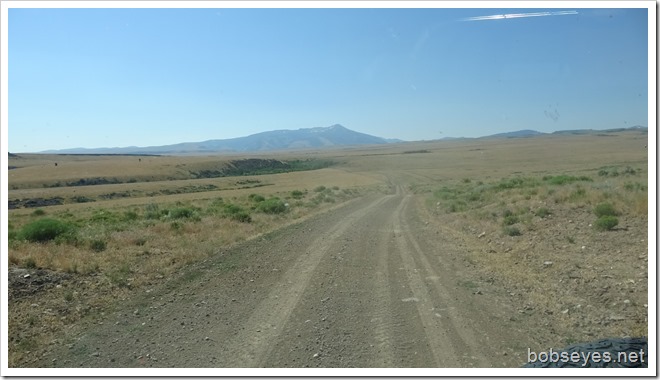 I pulled in the Diamond A Ranch and the dogs were all barking and there was a little girl about three standing in the yard watching me, in her pajamas, but otherwise I couldn’t see anyone else around so I knocked at the door and her Mom Jackie came to the door. I explained who I was and asked for water which she gave me and said if there isn’t anyone home when I come by feel free to get what water I need from the faucet there. Greattttttttttttttttttt.

So we were shooting the bull while I filled my water bottles and I showed her my blog on her internet connection which she would also let me use, but I figured I could get access in Jarbidge so I passed on that.

We talked for a good while and she said I could use the air compressor which I forgot about and took off.

Blowing the rest of the seeds out

But I only got out of the driveway when I remembered the radiator and went back  and Jackie opened the shop up and set the air compressor up for me. I didn’t get a lot of seeds out so it meant I’d been fairly successful this morning which is good to know that method works when I needed to use it.

Here’s the shop and Jackie opens it up and get’s the air going for me. And yes, I was eyeing her bulldozer. 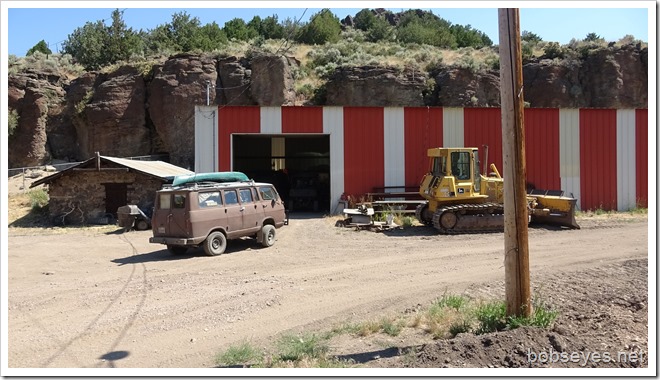 Here’s Jackie with her three year old daughter. I’m all fixed up and on my way to Jarbidge from here. Thanks Jackie. 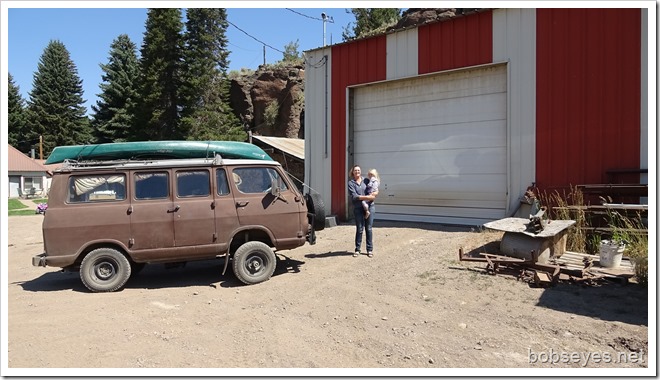 So I drove off and was headed to the town of Jarbidge along this road. 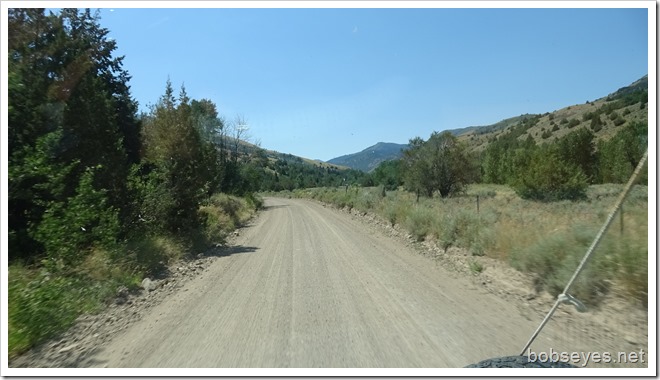 Here I am coming into the town of Jarbidge. The town’s people insist on a 10 mile an hour speed limit, so you can stop and shot the bull in the middle of the road without getting run over. 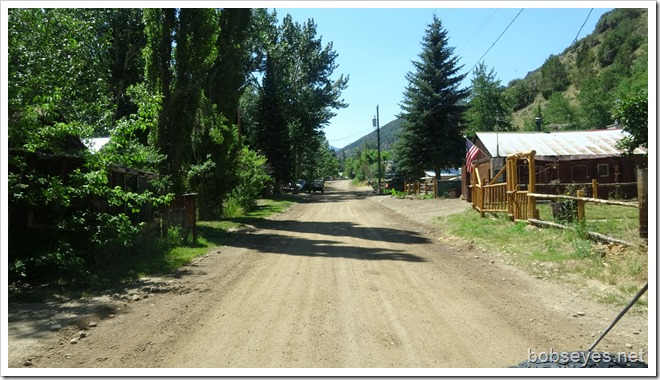 Here’s a sign in the town’s park explaining a bit about this place. 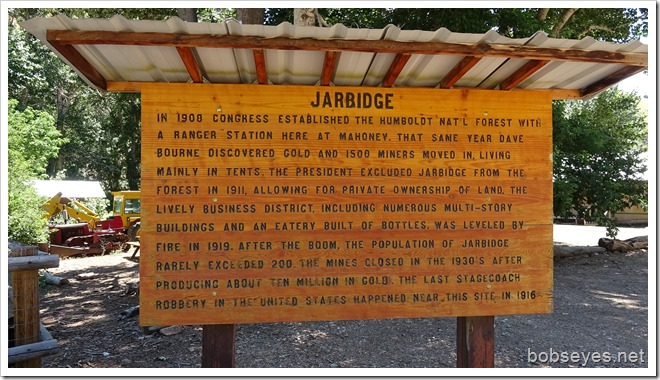 My plan was on to spend a couple of days in town which is an unheard of thing for me to do,……….. so what to do?

I knew Ray who has been running this little store for years and I always stop in to shot the bull and sign his guess book. Ray’s 87 and going blind and has hearing problems but it seems some of the local ladies have been helping him keep the store open. 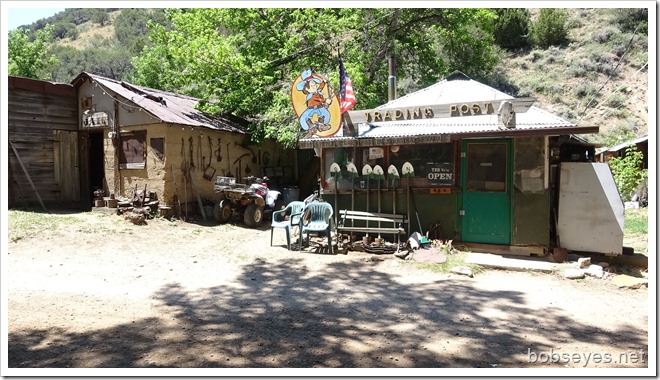 This is the inside of Ray’s store and I spent a few hours in that chair there by the table shooting the bull with them and customers that came in.  I especially found a lot in common with one of the ladies helping out, Lil, so we talked a lot while Ray listened falling off to sleep in his chair on and off. 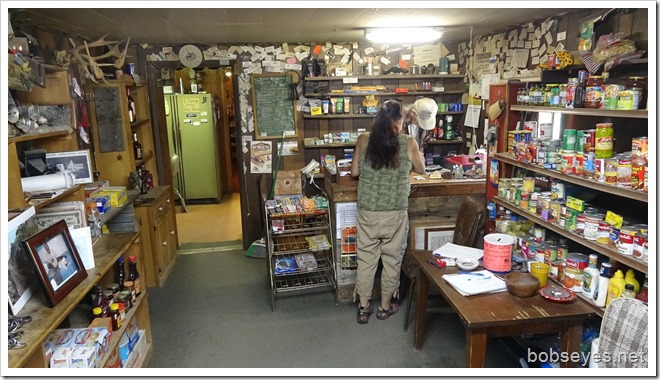 So what else should a person do in a small town? Well, Marty had told me there was a blue eyed blond lady that used to ranch sit the Diamond A Ranch and she worked at the local café, so I walked up town to the place where this lady worked and asked for Robin who’s name I found out at the store.

Talk with this guy instead

But Robin wasn’t on until the night shift which I found out in the bar, but the old guy that told me that at the bar directed me to this guy who often does work on the Diamond A Ranch. 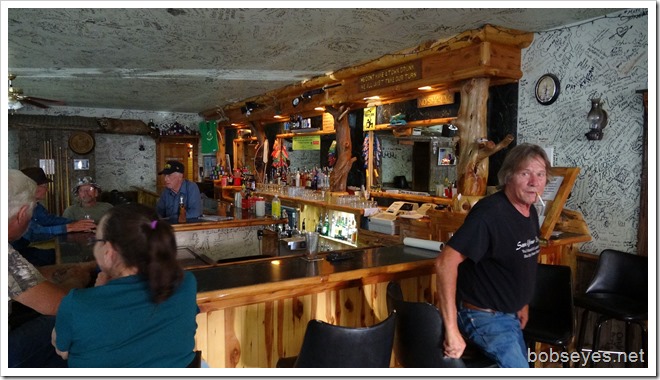 Of course the lady at the bar asked if I wanted something. I said I sure do, but I’m allergic to corn stuff, so no, sorry and I started talking with this guy, whose name was Guy.

The bar lady asked if I could drink well water and poured me a glass of ice water and even refilled it once while me and Guy had quite the discussion. He also was in the Vietnam war just after I was there so we reviewed a lot.

Shooting the bull with Guy

We sat in the bar chatting until some one said Guy’s dog is jumping out his van’s window which Guy knew meant the dog was looking for him so we went outside and shot the bull here on the porch for a couple more hours and with some other people that worked at the café. They said I could camp in my van here tonight, but I decided to drive just outside of town along the road as I figured I could sleep in better.

There’s Guy after we solved about half the world’s problems. 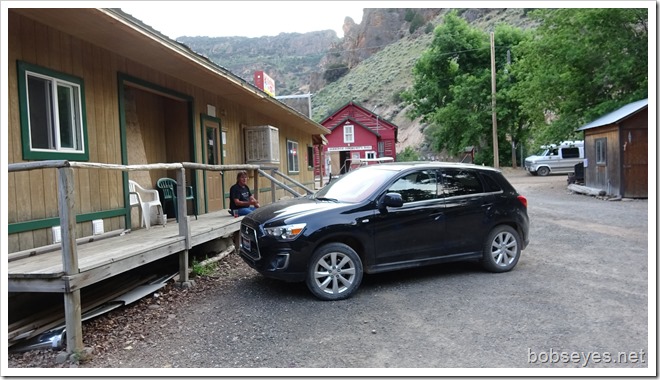 That all made sense now.

So I’ve had a successful day visiting in town and it looks like my calendar will allow one more day before I have to head north for our Continental Divide trip meet. I understand Marty and Patti have been having some problems with their van not running real good. Marty’s blog is listed in my blogroll in the sidebar if you want to follow his view of our Divide Trip and I’ll  bring the address in here once we get closer together.

That’s it for today.

2 Responses to Clogged Radiator, Diamond A Ranch and the Town of Jarbidge