Clearing Trees Off the Mountain Roads In the Rains

It was raining this morning again. But at around noon it got real heavy for a bit, like coming down in buckets.

I needed to put the chain that came off the other day, back on the saw bar and gas and oil it. 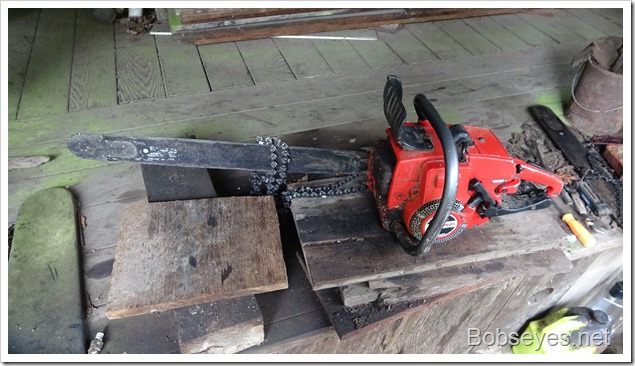 I also sharping the chain up.

I got that done and the rain was letting up some ,turning to showers.

It seemed like a good idea to put on my heaviest rain gear so I did,  just in case, as it was supposed to rain some more.

It was raining hard as I approached the hilltops, but soon let up for a bit.

This is where I left off the other day when the chain fell off the bar, so that’s where the work needed to be done.

This tree and some more trees behind this one needed to cut off the road. 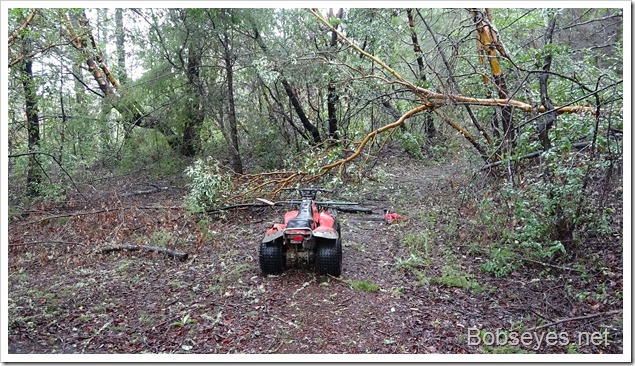 I started cutting these trees up so the pieces were small enough for me to move off the road, easily. 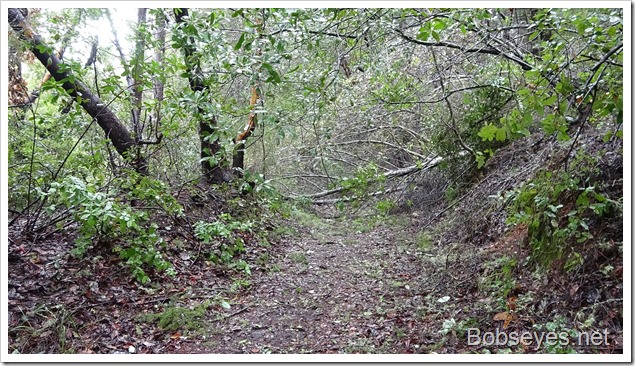 I cut them into small pieces like this and then moved enough of them off the road to get by. 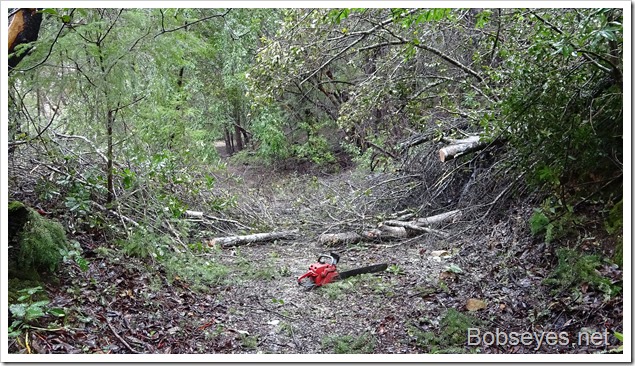 Then, I cut this one up. 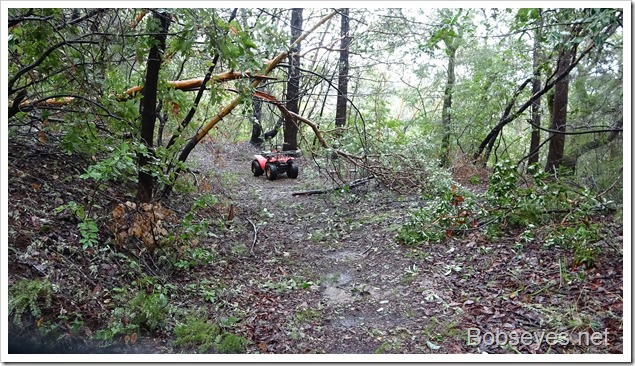 The road is cleared enough to get by. This is called Oil Can Flat because that old oil can has been here for years. It’s just full of water these days. 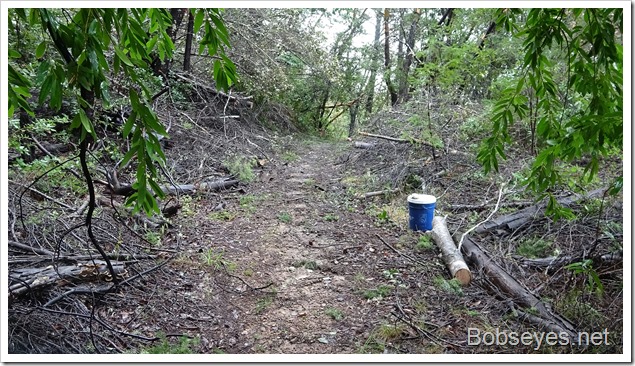 I continued on up that road, doing some ditching along the way, here and there, where it was needed, to get the rain water off the road. 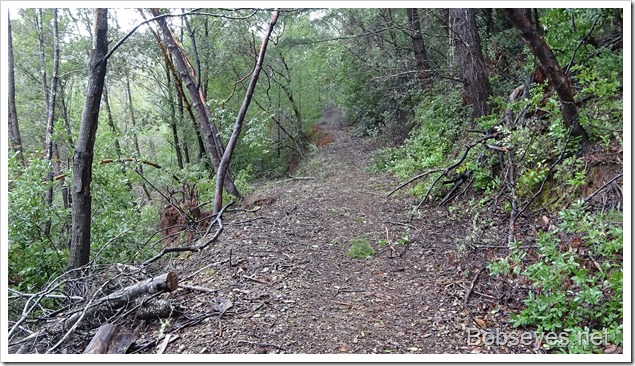 It started to rain some more as I approached the hill top again, so I buttoned up, or rather zipped up.

Headed to my Cousin’s place

I made my way over here and cleaned up this road from a lot of smaller stuff. I’m headed to my Cousin’s place to cut trees off the road. 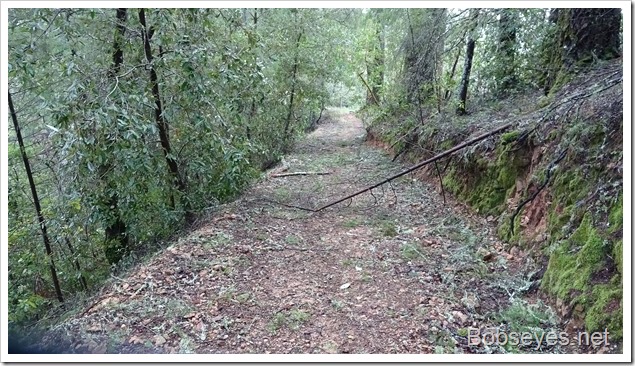 But first, I needed to clean these limbs off the road to get by. 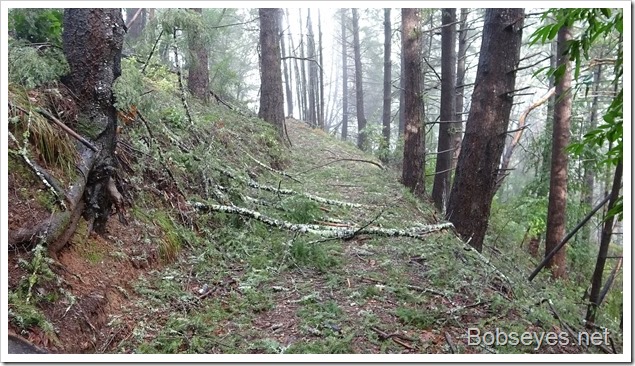 Just around the corner from that spot I ran into this big fallen fir tree that was blocking the road. It was too big for me to get off the road, but maybe I can make a trail around it. There was a lot of dirt on the log, so cutting it was likely going to cause my chain to not be very sharp if I wasn’t careful. I cut it up a bit, but then had a hard time moving these cut logs off the road. I used the shovel as a pry bar and almost broke the handle on it. 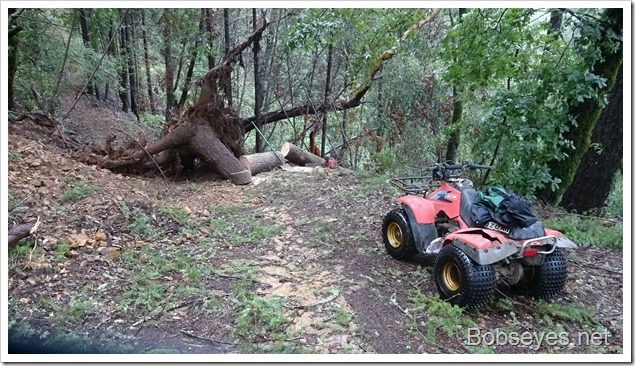 Finally, with a couple more cuts the logs were ready to get moved off the road. 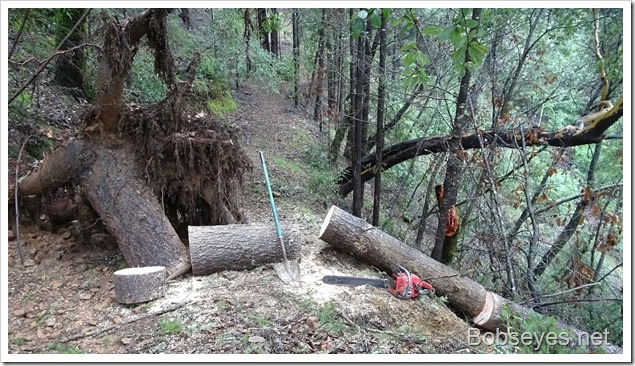 I was able to just get around the stump with the quad runner. 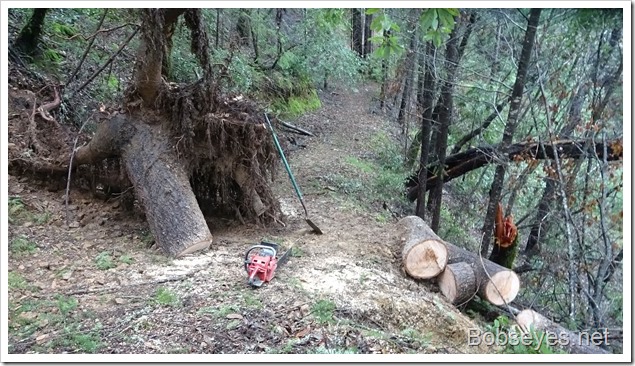 I was headed on up to the Top of the World, but had to cut a couple  more small trees off the road to get there. And I did a bunch more ditching.

This is the view from the top and it’s staring to rain again, picking up a bit. It’s getting real close to getting dark. Time fly’s when you are having fun. :O) 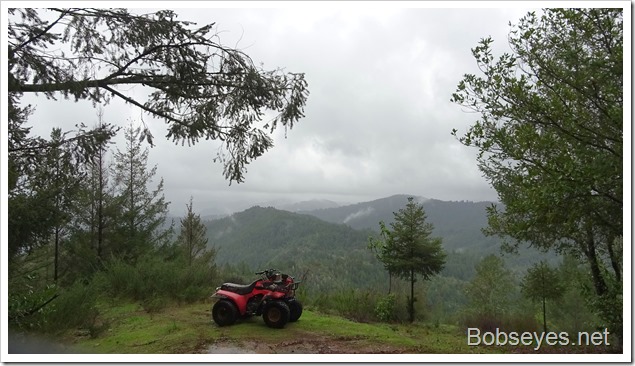 I had one more spot I wanted to cut, but when I rode down the ridge to this log, I noted there was another even bigger one behind it. 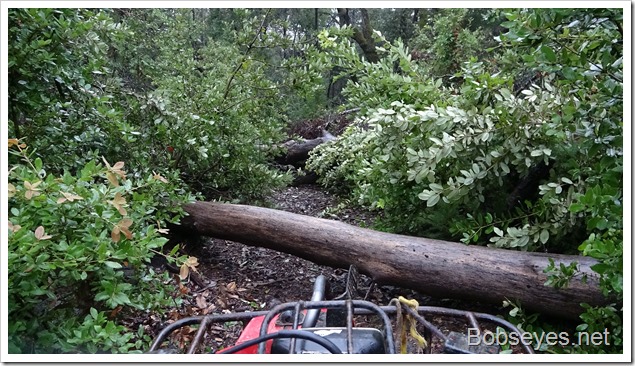 Since it was getting dark and I was beat and the saw was dull and these guys were going to take some time, I turned around and headed for home in the pouring down rain. It was a good thing I wore the heavy rein gear.

(Visited 121 times, 1 visits today)
This entry was posted in Uncategorized and tagged Clearin ltees off forest roads. Bookmark the permalink.