I got up a bit late today and when I did I saw Barry out in the front yard unloading his dirt bike so I got it going so I could join him.

It was about 45 degrees F. as we got ready to go and very chilly out. There was a dampness in the air.  I decided to add another sweater before we left and borrowed some leather groves from Barry as I couldn’t find mine. I knew it was going to be a chilly ride and it was even chillier than I thought it was going to be. Burrrr.

So we rode up into the hills and Barry takes a short cut so I followed  him. As I went around  a turn on a steep hill there was a two inch small tree hanging across the trailer where Barry had just gone though. He said it wasn’t there when he just went through. I hit it and veered to the right where there was a big tree I barely missed but by now I was going slow and lost the bike after just barely missing that tree and it was now on it’s side on a steep hill. I was able to hale Barry back as he was waiting just up ahead to see if I made it or not and came on back and volunteered to get the bike up and out for me which helped a lot. Did I mention it was cold out and we were both about frozen or at least felt like it.

I went down coming up the hill to Barry’s left onto this road and am back on the bike now and we will turn around and ride on up the road. 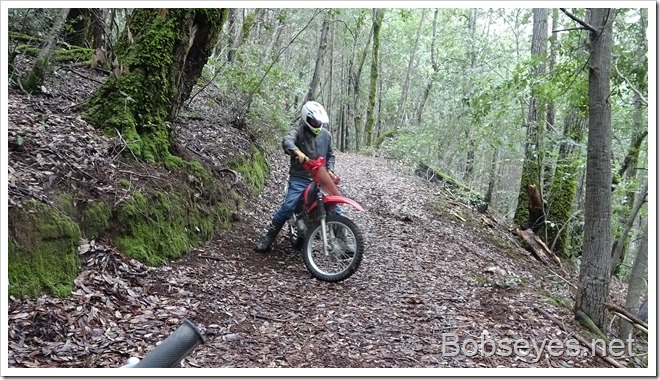 We rode around for about an bit freezing our butts off and made it to the Top of the World where we usually stop for a break, but not today as it’s cold and overcast so we didn’t even get off our bikes, well but did stop for a moment otherwise I wouldn’t have gotten this picture. Well I guess I did get off the bike to take the picture. 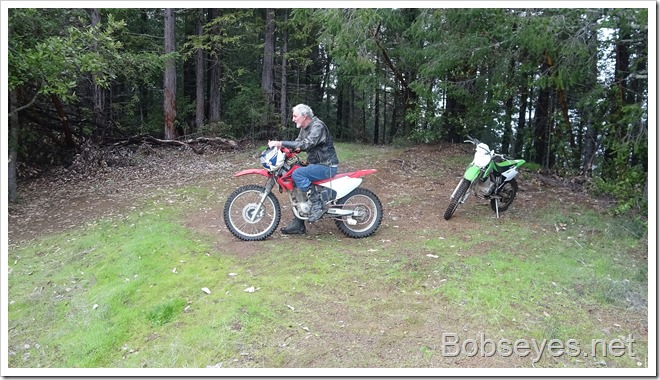 View from the Top

This was todays view from the Top of the World. It’s not raining but is supposed to in a day or so. 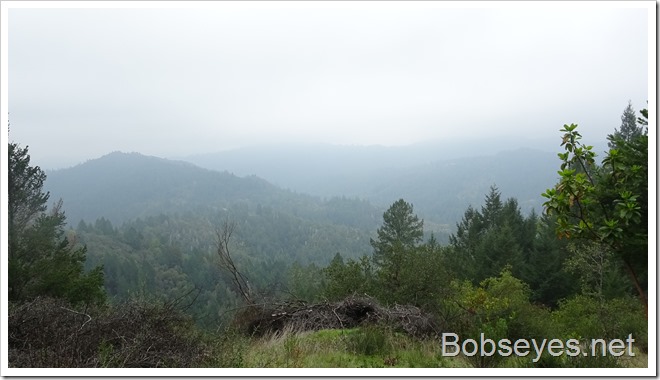 We took off and rode around some more roads when Barry stopped for something he saw on the hill above the road so he got off his bike to check out some oyster mushrooms. 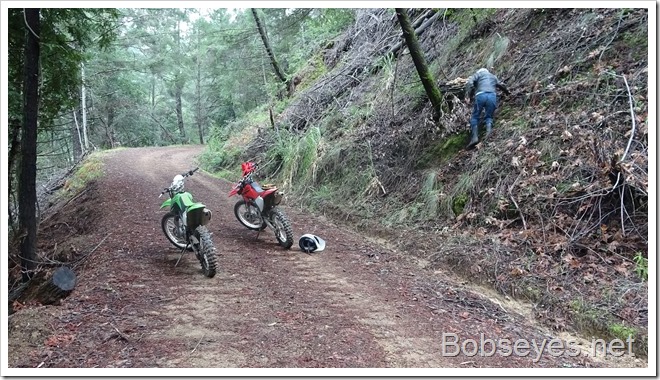 On inspection they were over the hill, too old. 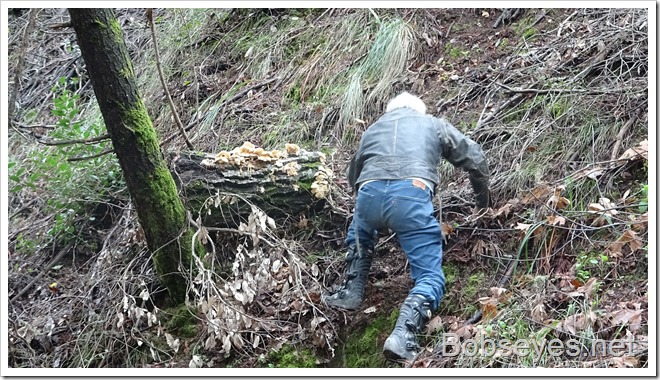 Lost Ridge, we had enough

We still had more roads to ride on so we continued and stopped at this spot I call Lost Ridge and stopped for a bit. We were chilled through and both said we’d had enough for the day and would head towards home, but not a direct route going on several roads on the way. 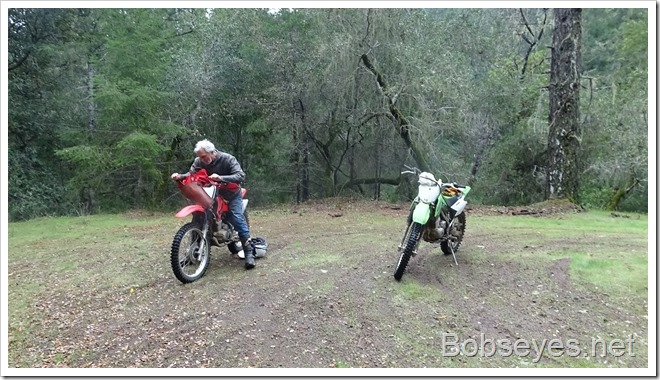 Barry is loading up his bike. It was a good ride even though it was chilly out. The forest was nice and fresh from the recent rains. 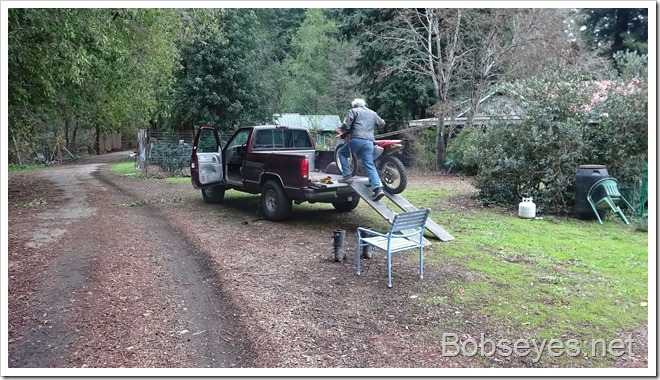 I went in the house and warmed up until I was nice and toasty.

I still had time to do something constructive today so I changed into some warmer clothes and took the quad runner back up in the hills to check on how some trails were holding up after the last rains that I hadn’t had time to check out yet.

I rode on up this trail. The quad goes slower than the dirt bikes so the chill wasn’t so bad and it was later in the day too. 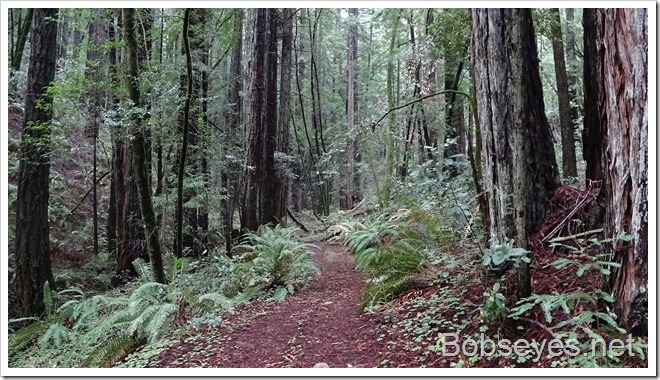 Most of the trail was in real good shape with no damage from the rains. 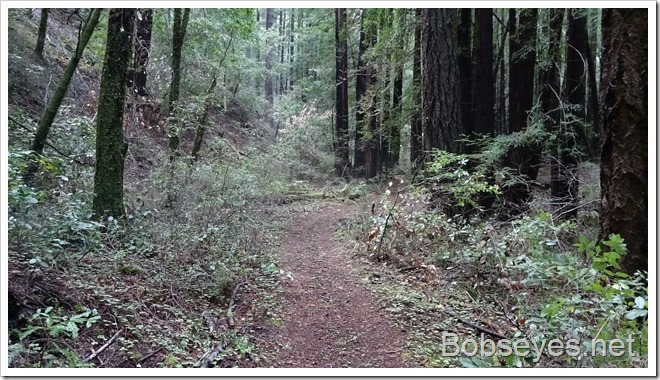 I knew the trail section just above here had a ditch jump it’s course so parked and walked up to put the ditch back where it was supposed to be. 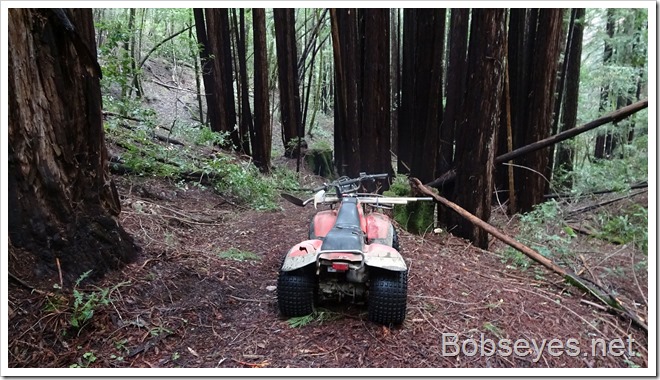 I set  my stuff down on this log for a break log. I find a chair is handy where ever I am. That log is in the ditch where the water is supposed to be flowing when it rains so I worked just above it to put the water back  so it flows through here. 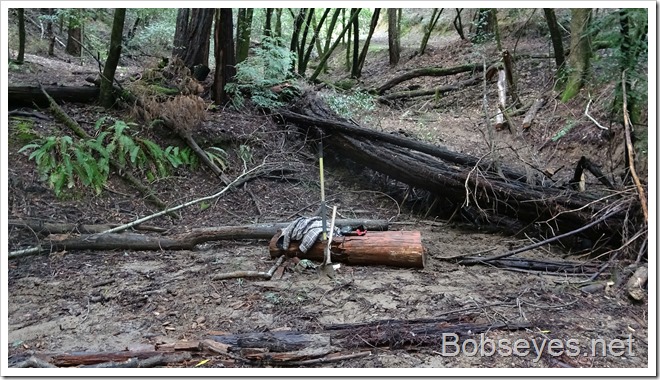 It took awhile and was just starting to get dark when I finished up and headed back to my quad runner parked here. 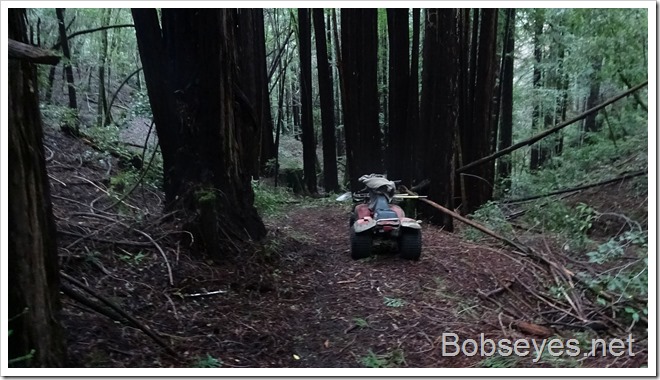 Even though it was getting dark it didn’t take long to get down the trail and back to  my house. 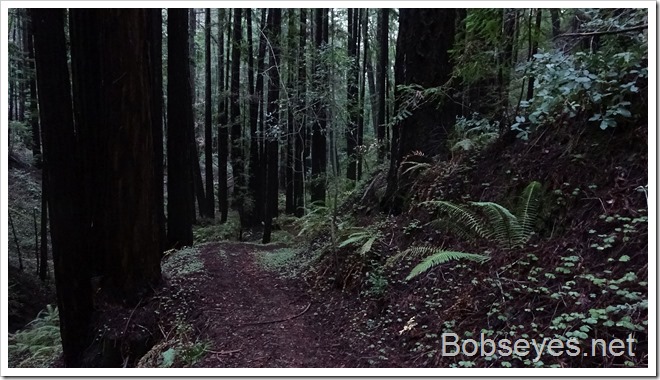 The chickens were waiting so I let them out and sat around with them for a bit until they went in to roost for the night. 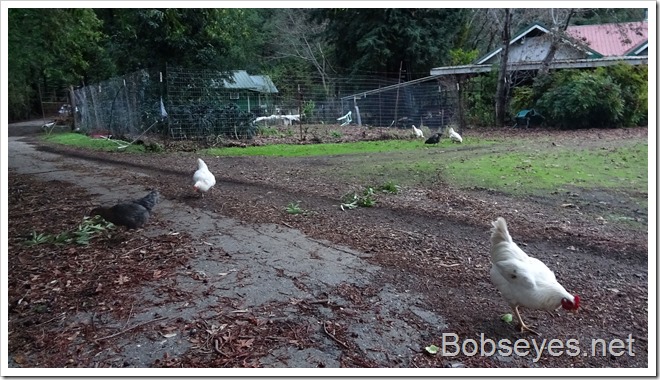 Chilly but still a nice day playing in the forest.

(Visited 138 times, 1 visits today)
This entry was posted in Uncategorized and tagged dirt bike ride in the forest, trail work in the forest. Bookmark the permalink.