That’s usually the first thing I do everyday.

The hens get theirs. 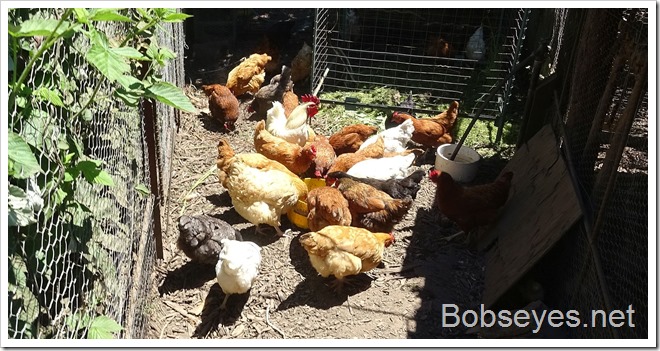 And the little chicks get theirs too. I fed them some of the chicken eggs back after I boiled them up and crack them up. They eat the shells too, usually first. . This time of the year I get more eggs than I can eat. When I feed them to the hens I just get them laying even more eggs. 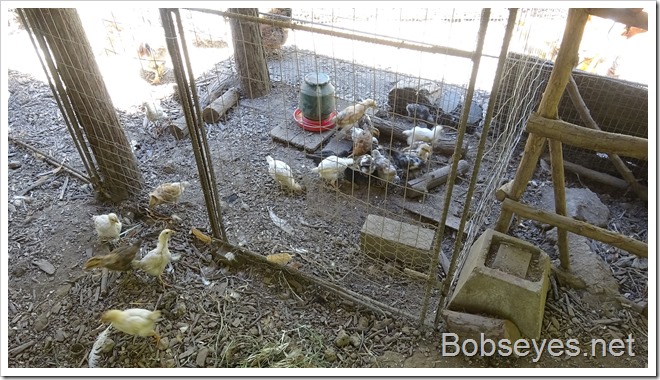 Final sediment removal from the old well. I wanted to give the old well a good shock to maybe loosen any sand caught in the inlet slots on the six inch steel pipe so I tried hitting the steel pipe with a big hammer but that didn’t seem to do much.

My plan was to wire it to the suction head and light it and drop it into the well hoping to get it down in the water where I thought it would do the most good doing what I wanted done, but I was wrong about that.

I pulled the suction pipe to the surface. 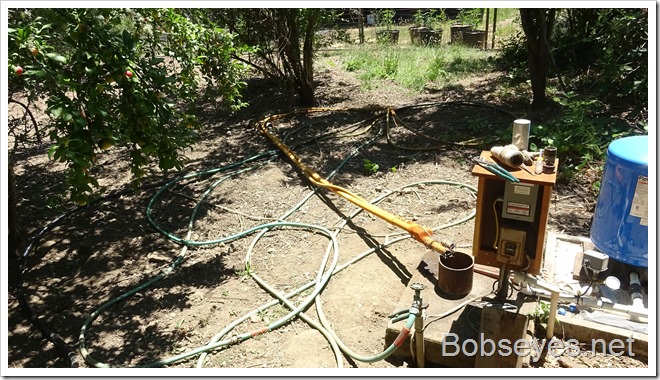 And wired the fire cracker to the digging pipe just so I could get the paper parts back maybe so they wouldn’t be in the well water. I think that fire cracker may be called a block buster and I’ve never lit off one this big but I have done some dynamite so I was game. 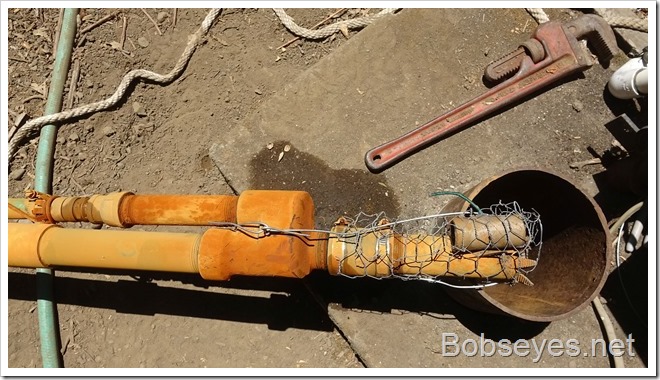 The only problem I had is I wasn’t sure if the fuse was fast or slow, I suspected it was fast so I’d have to hurry.

I lit the fuse and stood to the side of the six inch pipe and lowered the pipe as fast as I could. Ka-boom.

It went off a lot sooner than I thought it would and didn’t make it into the water which actually ended up better than if it went in the water.

Now since I was standing next to that six inch pipe I found out what it feels like to be near a six inch canon when it goes off. Other than the surprise of it going off, it all worked out well. That was a rush.

I figured out that with the big canon blast there was also an opposite reaction that did a better job of blowing out the slits than if it went off in the water. I think now if the charge went off in the water it would of dampened the blast  a lot. Some times things just work out. 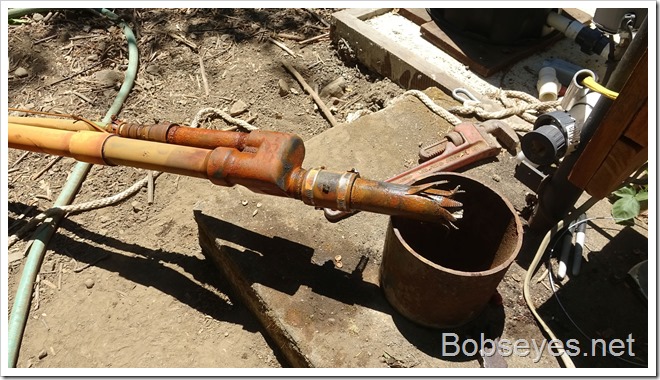 Lots of muddy water after the charge went off. 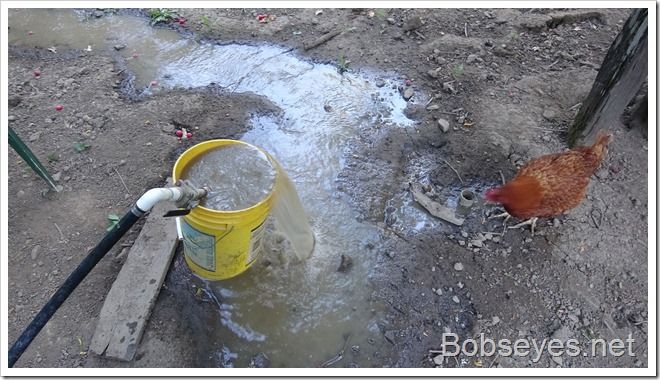 I pumped fine sand into the bucket so I’m about ready to install the water pump as I think the well is good to go. 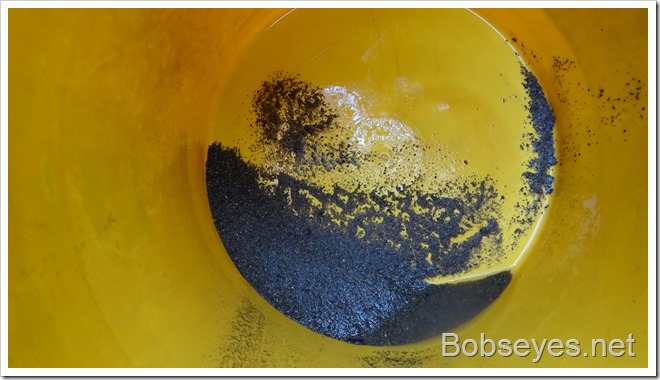 I will continue to remove sediment until the muddy water runs clear.

All my little chicks are now sleeping in this nest box without a momma as she couldn’t take care of them all after taking them all over from the other hens. I’m not sure how many chicks I have, 30 or so I think. 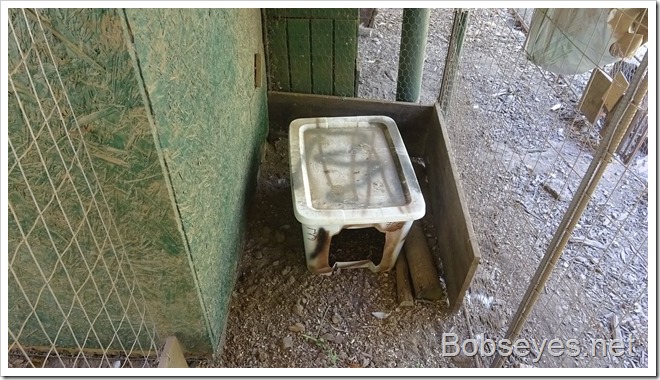 I removed the nest box and now they will have to sleep on the ground which I think will be healthier for them.

After a nap and a good break I rode the quad runner up into the redwood forest to work on some more trails.

Working in the redwood forest

I rode up through here. 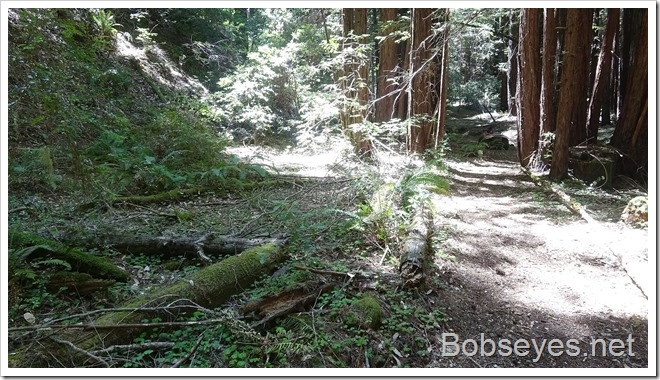 And stopped to work on a trail that goes to a waterfall off to the left. 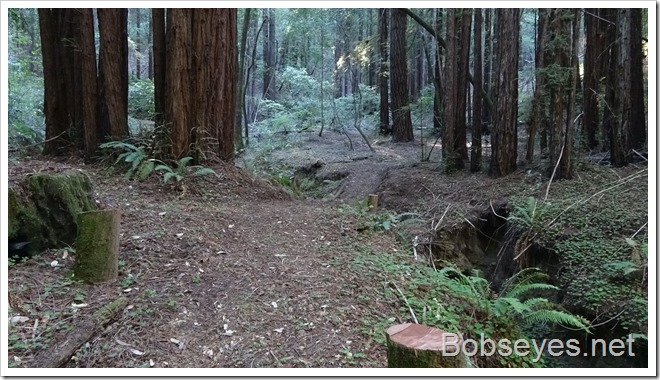 I over did it on the trail work a bit and my back was hurting pretty good when I went on home for the day which meant I needed to do some resting up.

While walking around the yard in the evening I thought the loquat tree could use some trimming over the chicken pen as it’s dropping leaves that are piling up on the pen roof. So I trimmed some of the branches off the tree and  now they have to go to the brush pile. I will leave them out to see if the chickens will eat the leaves as I’ve seen them eat them before. 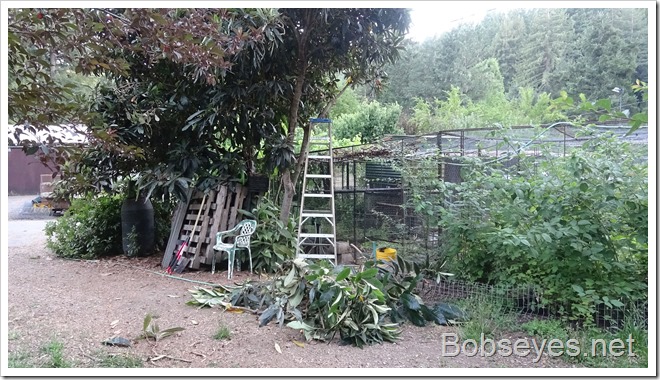