As I was having my cup of coffee getting it going this morning I was watching my chicken pen camera on my computer when I saw this. 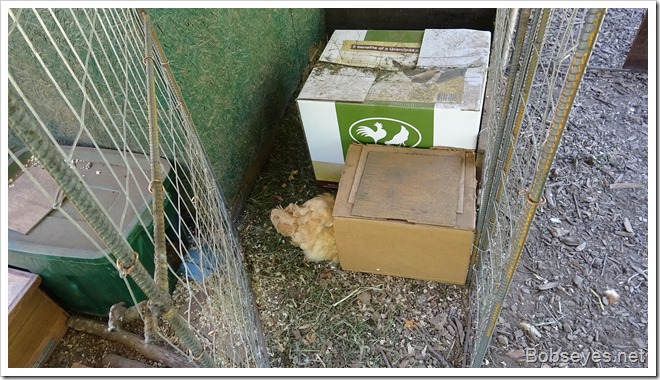 That looked to me like the momma hen wanted to get back in on her eggs but there was another chicken on her eggs so she couldn’t get back in the nesting box, so I went out to have a look. Originally that chicken started out in the green box but the two hens changed boxes on me early on so they each had a nest and all was well.

I was headed to the shopping area today and was on my way out the door when I heard the chickens clucking like they do when eggs are being laid but this clucking was from the mulch run. I’d heard them do this once before out in one of the grazing pens. When I went out to check on all the noise the first time there was deer in the yard they were all staring at. I chased that deer out of the yard.

The deer in the yard

So today I was looking for the deer and sure enough there it was. 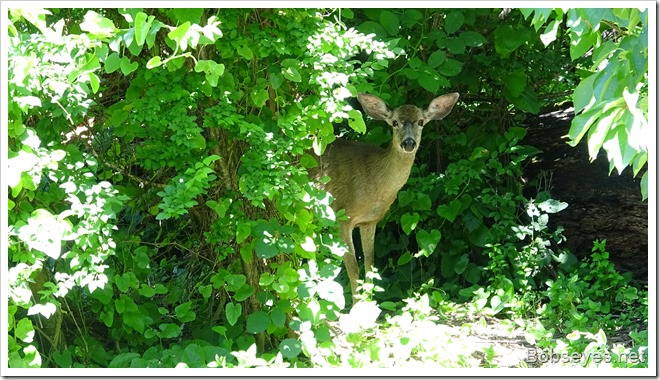 I chased it out of the yard over through my brother’s yard.

He was working on cleaning his vegetables to sell at the farmer’s market.

He gave me one of these five inch onions he’d just grown, a big red one. Looked yummy to me. 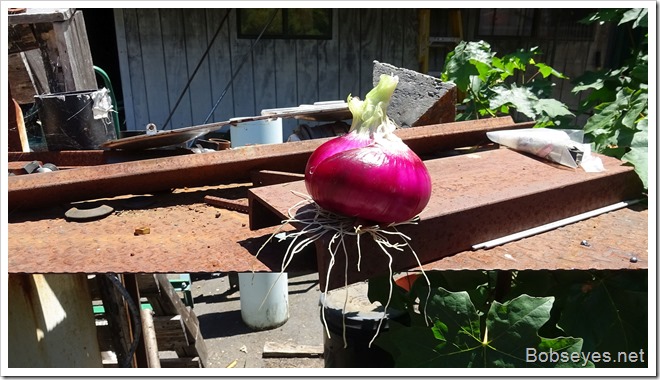 I finally got on the road and headed on over to visit with my friend Joe.

I found him in his shop doing some work. We shot the bull for awhile and as long I was there I needed to reactivate my cell phone to show them I use the thing so we did that.There’s no signal where I live so it’s pretty useless most of the time except when I travel.

Then we went out to have a look at his garden which puts mine to shame.

We entered his garden here. 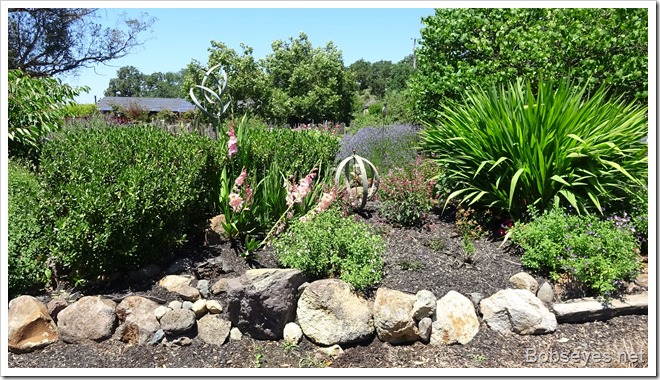 Here’s Joe walking down one of his paths showing me around and changing the water as we went. 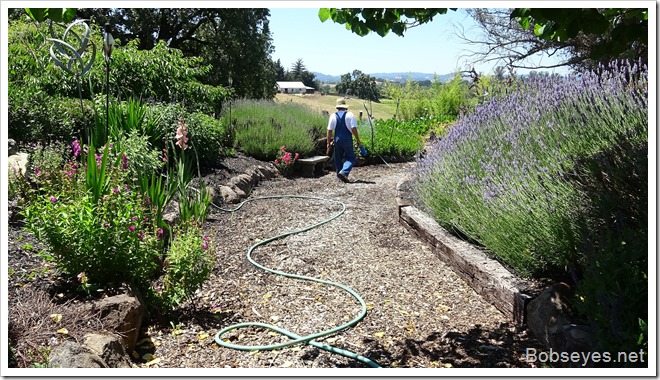 He has things in good shape and it looked like he spends a lot of time out here. 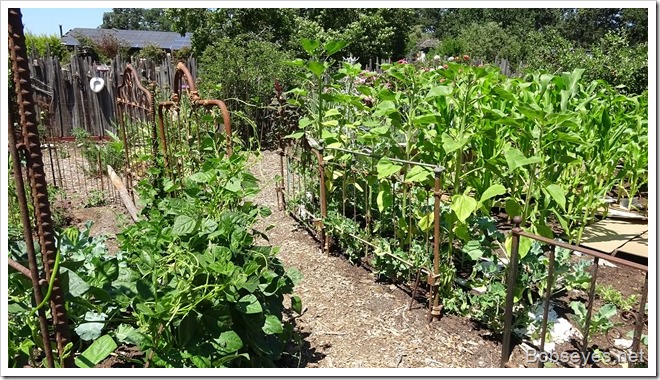 A view of his neighbors place. 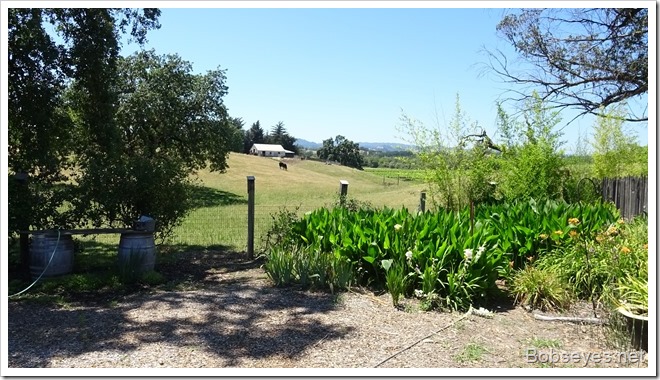 We approached some chairs and he says sit in this one it’s his favorite view so I sat down and yes it was a very good view from that seat looking down the path and out into his neighbors pasture. There’s a full blown airport on the other side of his neighbors place, just out of sight. 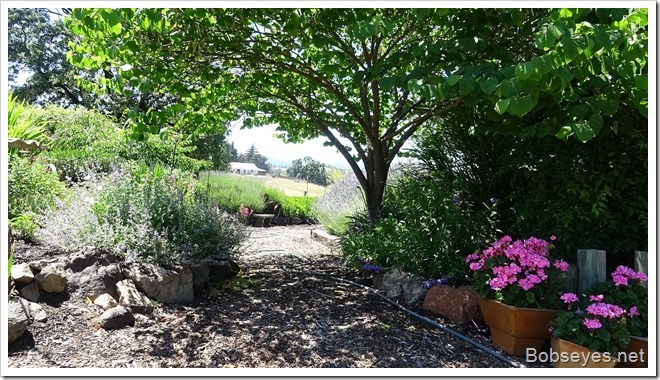 This area sure looked nice. 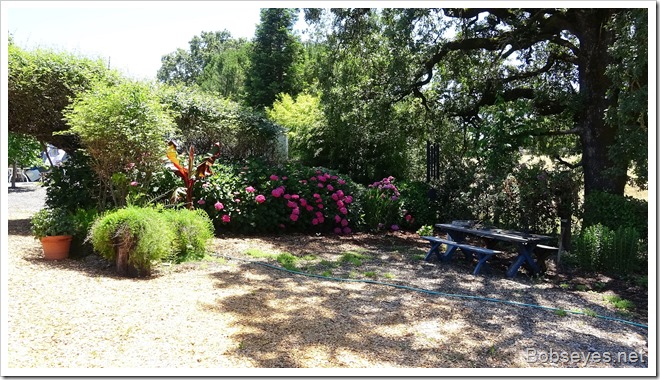 And this lily area he changing the water in you can see in in it there or at least his hat. 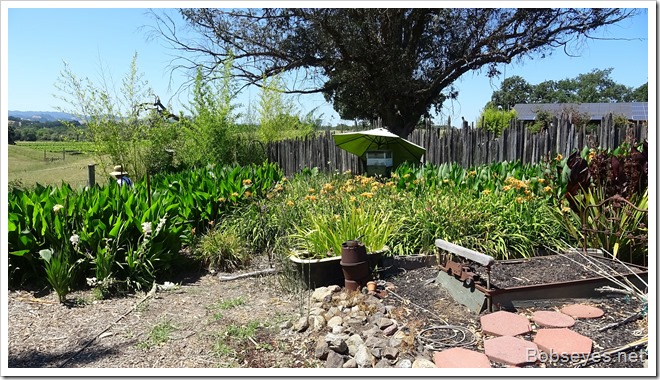 Joe had a bunch of little tomato plants he gave me which I put in the car. That was good as all  my tomato plants I’d planted didn’t make it so things worked out great.

Checking out some junk

After a good visit I left to go check some old metal out my brother Barry told me he wanted to get rid of.

I drove on over to  have a look. The metal is on this old trailer that isn’t really a trailer but a unit someone was making for the Burning Man thing in Nevada but never finished. 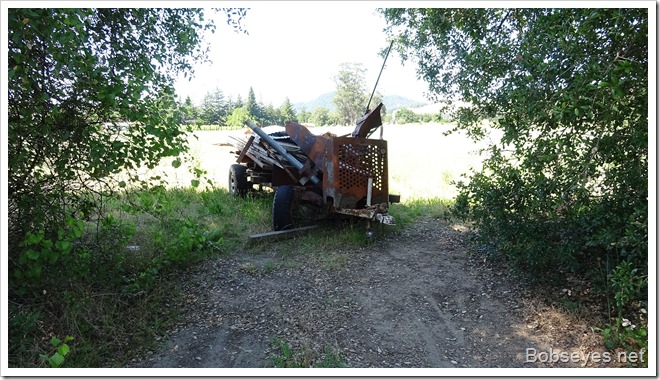 It turned out the thing was loaded with lots of steel more than I could really deal with. Fortunately I had my cell phone with  me that I’d reactivated while over at Joe’s and I’d put his cell phone number in it so I called Joe and told him to bring his truck on over and he could have all the metal.

Being a person that used a lot of steel and knows what it costs he was on his way.

Here’s some of the metal on the the unit. 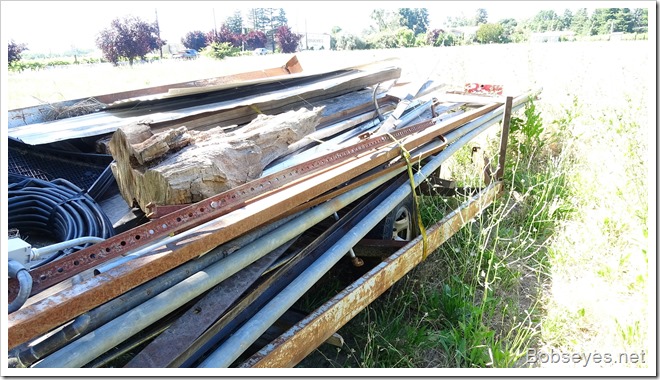 More steel than I thought

Looking more closely I could see there was quite a bit of metal there. 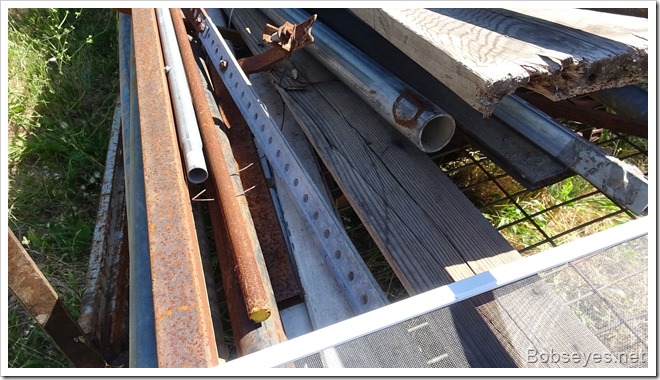 The pipe on the right is a new piece of two inch steel pipe twenty one feet long and some more galvanized pipe. Nice stuff. 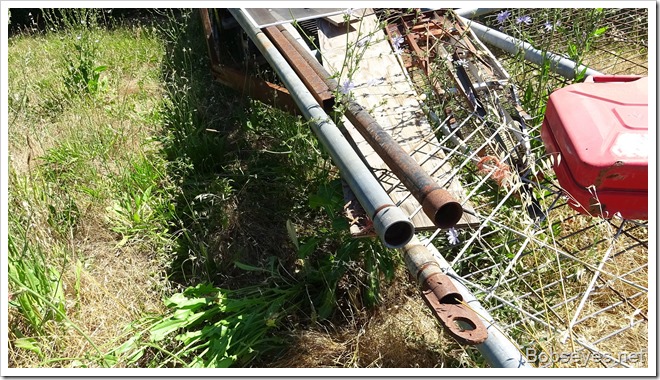 It took Joe about a half hour for him to arrive and I helped him load some of it but he wasn’t feeling too good so I told him to take his time and come back for more of it. I asked if he knew a junk steel man to get rid of what he didn’t want and he did so he’ll arrange to get rig of it all for my brother.

I left him tying the steel down to  his truck and drove on up to Healdsburg to visit my older brother Mike, but he wasn’t home. He must have been out on his walk.

A bit of shopping

From there I drove on back to Walmart and did some shopping. I had planned to do some more shopping but that was all I had time for and I was already shopped out. It doesn’t take much shopping these days to shop me out. Just to many people around here.

I headed on home from there and put my stuff away. The day was almost over so I did some chair hopping  and puttered around the yard for a bit and that was pretty  much my day.