Chickens and Forest Work, and An Unexpected Rain Gets Me Wet

I fed my chickens then went over to feed my brother’s chickens, letting them out in the yard first. 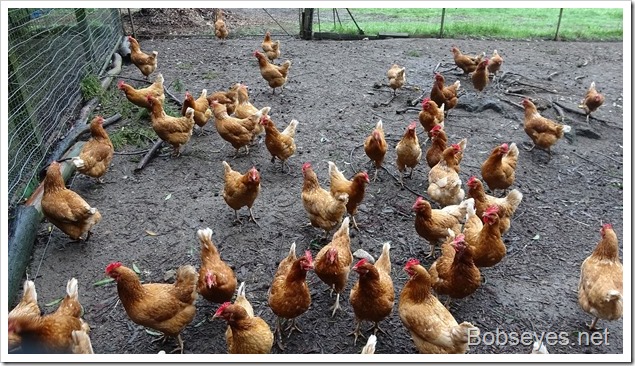 Then I dumped the chicken feed into the feeders and collected the eggs for the day. 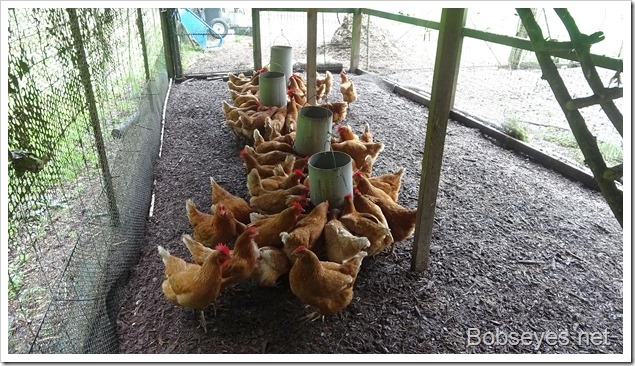 Then I checked the rat bait to see how it was doing and it was mostly gone so I filled it again. They seem to like this new stuff. 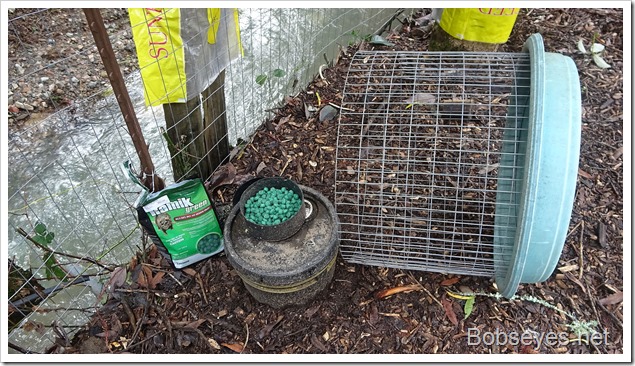 The game cam is on the white bucket so I took it in and checked out last night’s action which showed there are several rats eating the bait. 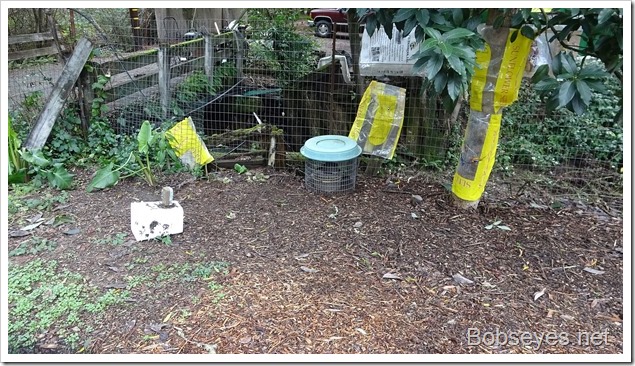 Should of checked the weather report

I didn’t get around to checking the weather report today, so just went on up into the hills without any rain gear which turned out to be a  mistake.

Going up this trail, I stopped to remove some of the tree limbs off the trail. 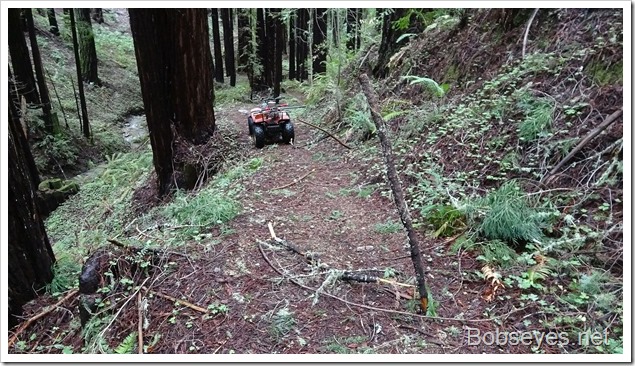 A little further up, some ditching was done to divert the water that was going down the trail when it rains, across the trail, instead of down the trail. 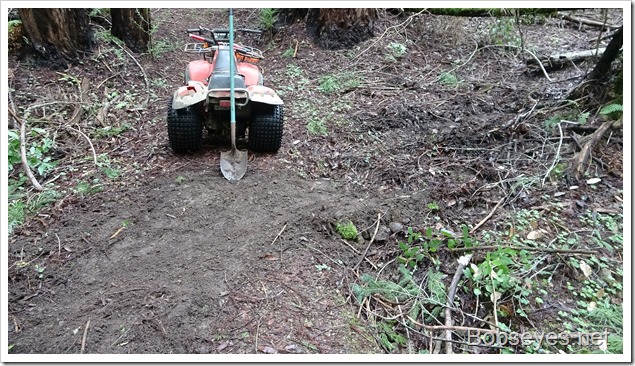 I was headed over to my Cousin’s place to continue removing fallen trees off her roads.

This was the first one I removed. I’d brought up my smaller saw and was thinking maybe the larger one would have been a better choice today, but the small one is what I had, so I made the best of it. 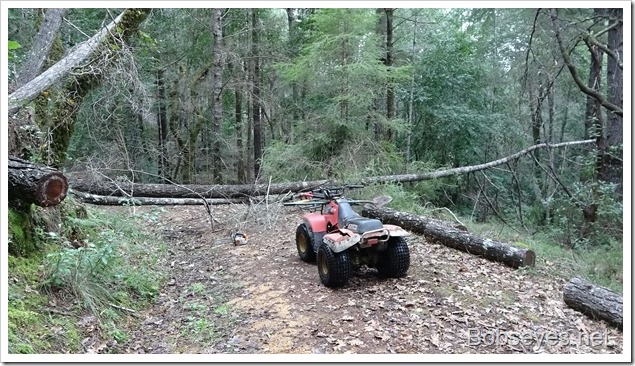 This log was the next one I ran into. 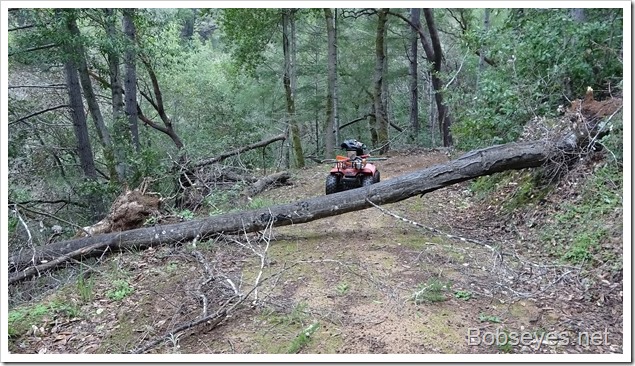 About that time a light mist started to fall which I wasn’t expecting. I kept working hoping it would stay a mist. It was very slowly getting me wet.

I chopped the tree up so was able to roll the logs off the road and I was off to the next one. 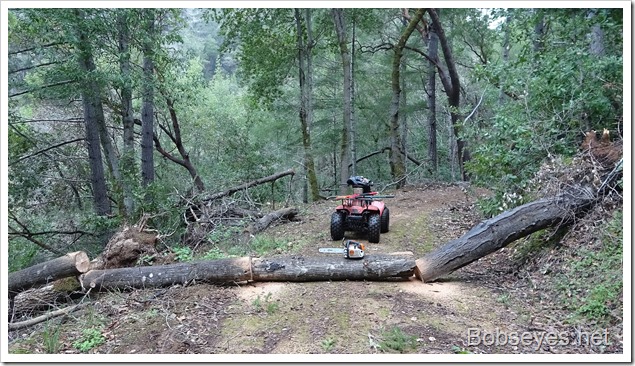 The next one was some smaller stuff which I cleared off the road. 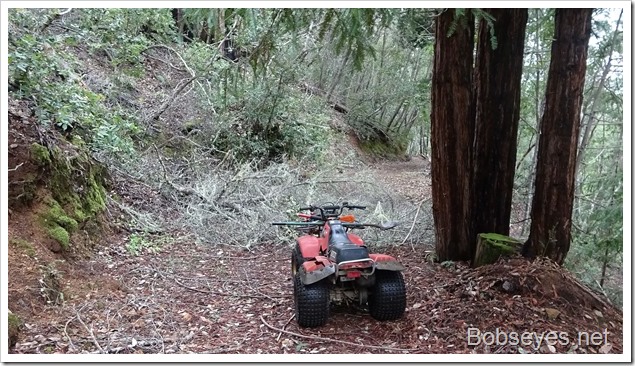 Boy, there are sure a lot of downed trees on this road, which is the lower one, going down to Howards Landing 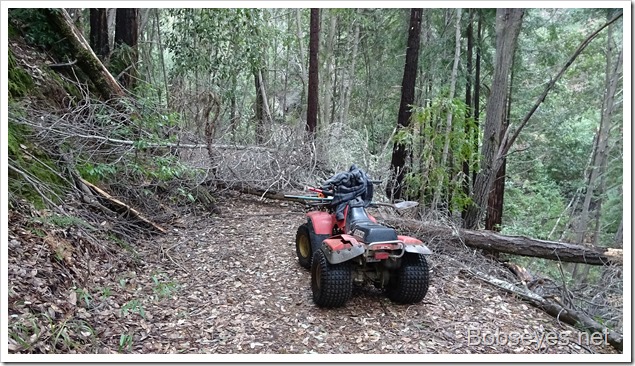 This fallen redwood tree was the largest one I cut. It had a nice overhang off the road. 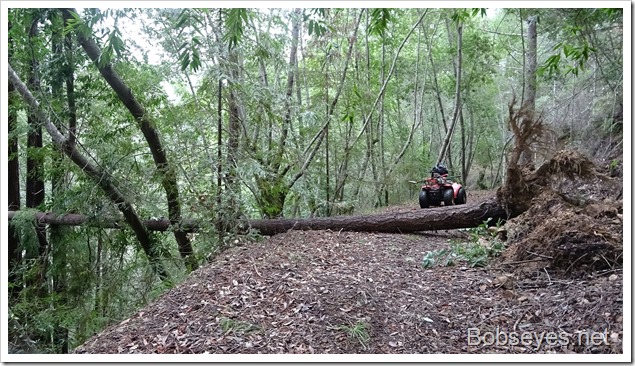 I figured if I made one cut next to the stump, the part over hanging off the road would pull the log off the road, like this. That worked out well and made the job  much easier. 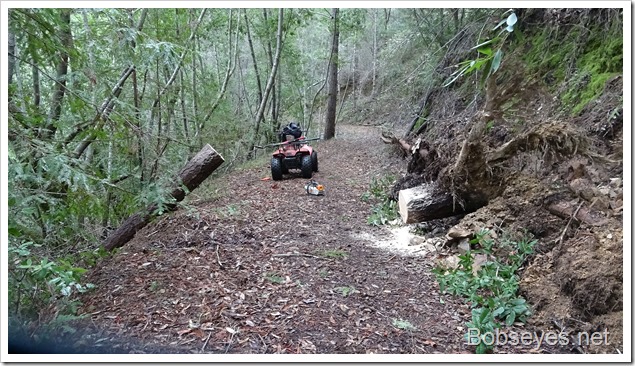 Up the road to the ridge top

When I got to Howard’s Landing I went up the ridge road, that goes to the top and cut a couple more smaller trees off the road.

I remembered there was a one more tree on that road I wanted to get, as it had fallen over, but was still stuck on the stump. It looked dangerous, like some vibration from a rig might make it fall off the stump, so I was going to cut it down,……But. 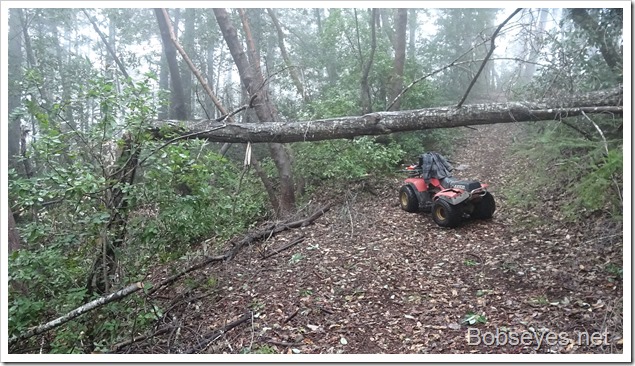 I started the saw. It ran for two seconds and quit, out of gas, like me.

About that time the ran picked up and I was getting wet, so I headed for home getting wetter. It stopped raining about half the way home. I was a bit on the damp side as I went on in the house for the day.

2 Responses to Chickens and Forest Work, and An Unexpected Rain Gets Me Wet