I was a bit slow getting it going today after all the work I did yesterday.

Once I got it going I went out to check on the chickens. This chicken has been sitting in the egg laying nest box most of the time meaning she wants to be a momma. I’ve been taking her eggs away from her each day but she keeps at it so I’m thinking I’ll give her some eggs and let here go for it. 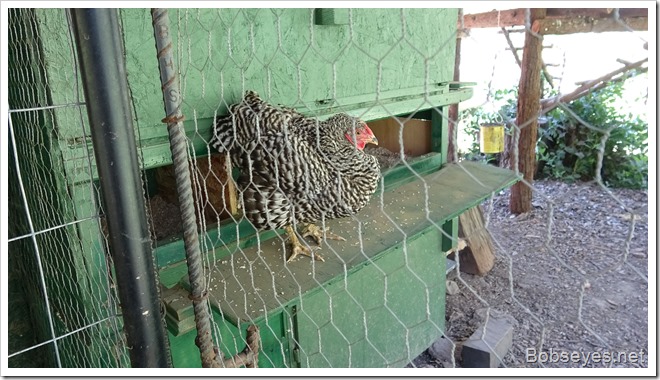 You ever do this

Last night I was making a double batch of spaghetti. When I was adding pepper I opened the wrong lid and accidentally dumped a few tablespoons of pepper into the sauce. I quickly removed what I thought was most of the pepper and forgot about it. As I was eating it I thought wow my neighbor who I got the home made tomato sauce from must of used a lot of chili, forgetting about my boo boo.

Boy the first helping sure made my mouth hot. On the second helping I started to get wise and remembered the pepper I spilled and decided this was just too hot for me to eat.

Chickens don’t care, worms to them

With chickens nothing gets wasted, they turn things into eggs. I scattered it around and the chickens loved it 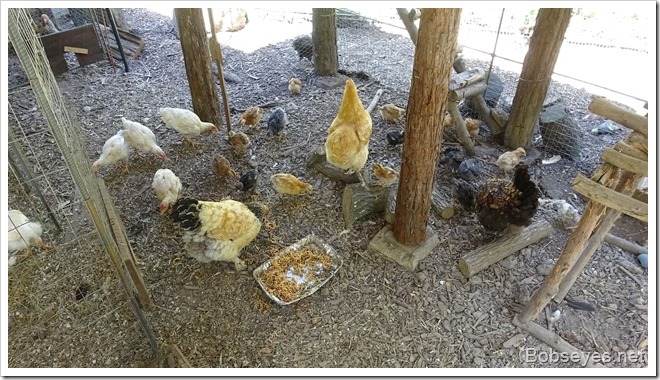 While I was in  the chicken pen I was thinking my rat proof feeder needs to be in another spot as I’d like to shut the bigger chickens out of it sometimes to let the smaller chicks feed without being harassed as chickens tend to do the pecking order thing and the smaller chicks don’t get enough to eat.

The feeder has been working well as I shut the led at night to keep the rats out and the chickens trigger the lever in the morning and the lid opens so they can eat early long before I get it going. It’s been mostly doing a good job. I haven’t decided what to do about it yet, but I will. 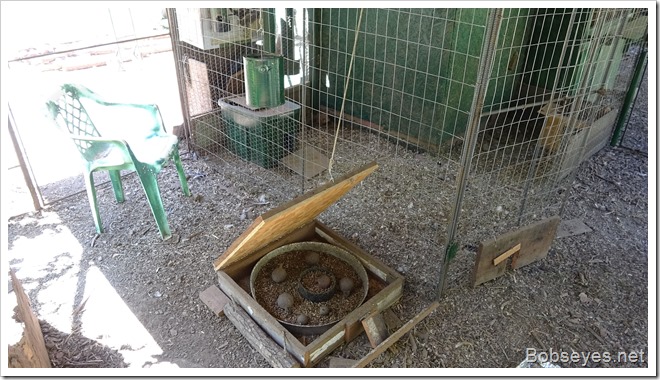 Finally got it going

Around 2 I finally got it going and rode the quad up to work on the spring tapping project I started the other day.

But first I stopped at this old apple tree. When I was a kid growing up I used to eat the apples off this tree as soon as they got the size of marbles and they were already sweeter and crunchier than most mature apples so I stopped to pick a few to take along to eat. These are gravensteins.

That’s the tree with the ladder under it. I believe these apples were planted around 1900 by a well known guy from around here by the name of Luther Burbank. Yummy apples. 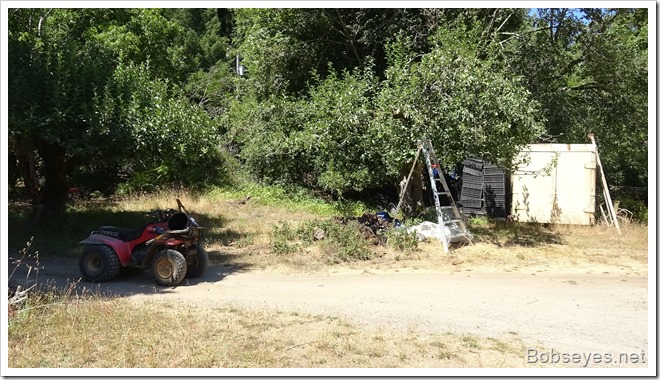 I took my apples and rode on up the hill to the spring area. 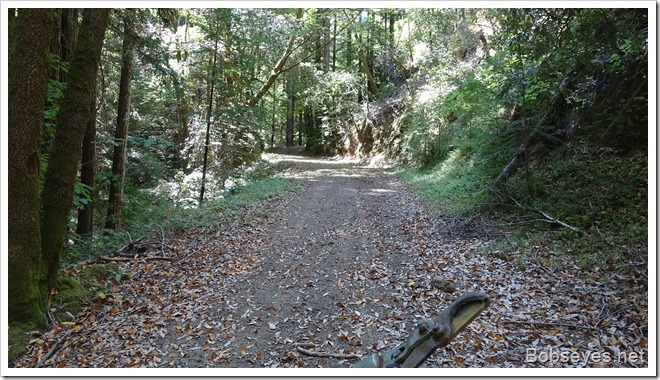 No water was coming out of the pipe as expected. 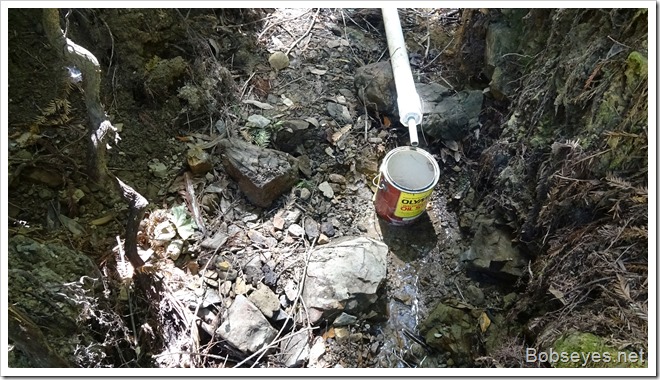 This is the area of the spring tap where the water comes out of the ground. 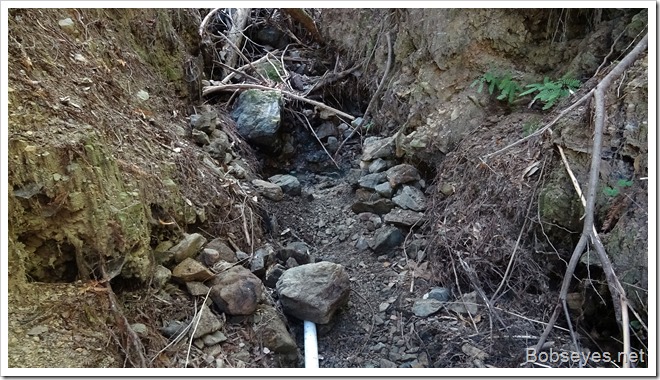 Here’s the spring tap I put in yesterday with water, but the dam is gravel so it’s all leaking out and running down the hill. 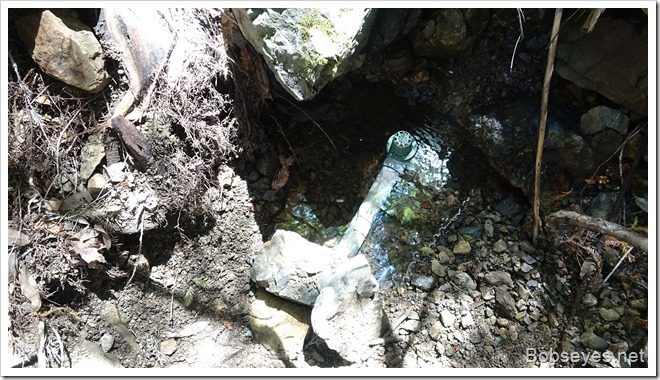 Clay for a dam

I have a remedy for that, clay. I looked around for some clay around the spring area and found a little here so started getting what I could. This isn’t the best clay but it’s close and I only have so  much energy to  move it to the spring in half full buckets about  100 feet away. 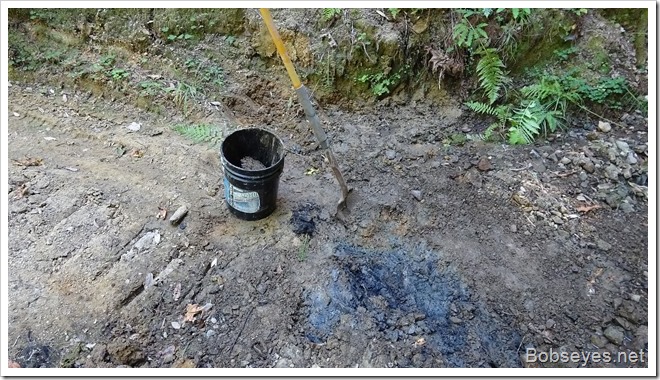 I finally did get into some better clay after about 6 buckets.

Here’s the spring tap. I carved out the gravel around the pipe inlet and have dumped some clay in the water to wet it and  make it nice and formable. 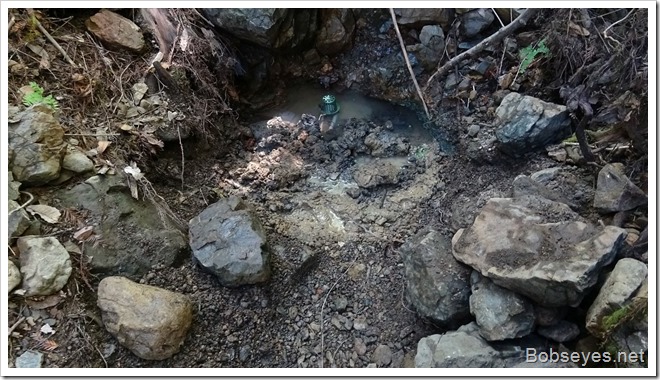 Than I played in the mud and formed this little basin to catch the water coming down the hill and not let it leak out. It’s a sorta dam and will be more of a dam as I add more clay later. 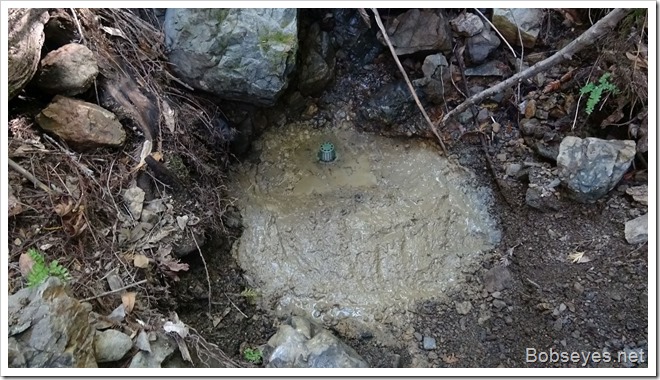 Here’s a close up of the operation. When I’m done adding clay all the water will go down the pipe without any puddles forming. Puddles are a place for things you don’t want to get into the spring so eliminate the puddles and those things don’t cause any problems and you get a sanitary spring tap. 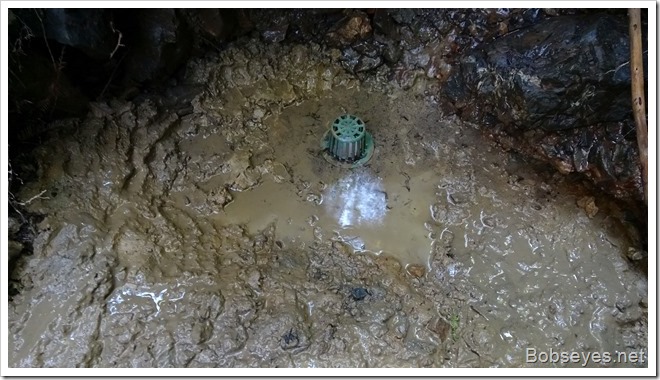 That was all the clay I was able to move today as the ol body was revolting.

Measuring how much water

Now it was time to check gallons per minute to see how the new spring was doing. I usually think there is more water than there actually is which I did on this one but that’s the way it goes. 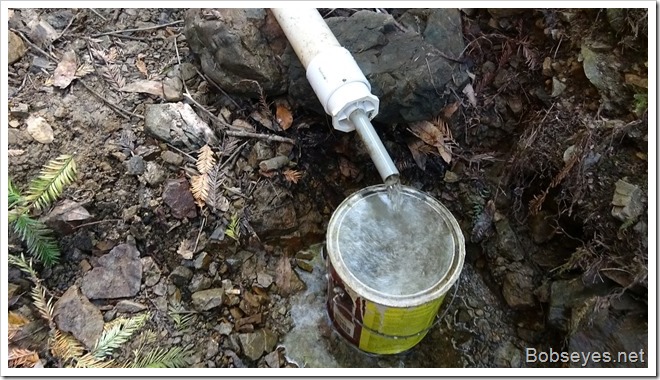 I measure how long it takes to fill that gallon paint can. It took 60 seconds to fill it so that means this spring is giving out 1 gallon a minute which is  pretty good for this area. 1 gallon times 60 minutes is 60 gallons and hour which works out to about 1440 gallons in a day. Not bad for a little hard work and this is likely it’s lowest limit as it’s that time of year and most of the time it will give much more water than that. Tasty stuff.

I was worked out so I rounded up my stuff and headed down the hill to check the water level in our tanks. 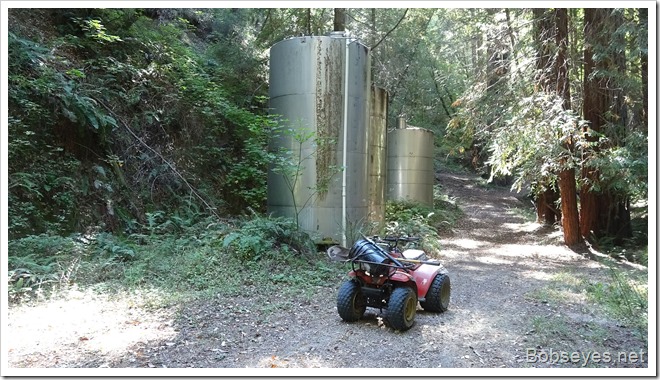 It’s hard to see but those metal balls on the string on the left side of the tank show the tanks are almost full of water which is good eh. 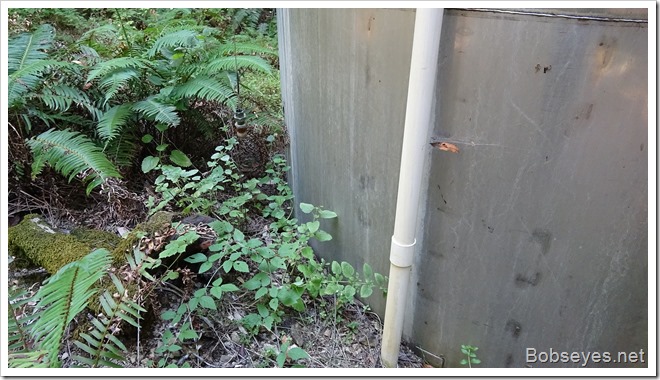 It was about 5 PM when I got home and I was beat and needed rest so that’s what I did.

Nice day up in the woods working away. Nice fresh tasty water is always nice.