Chicken for Dinner and Poo For an Apricot Tree

Two for the dinner table

With my roosters maturing and starting to make a lot of noise it was time to prepare two of the largest noise makers for the dinner table.

I got my old cage out that I repaired the other day and set the mulch pen up for catching chickens as it’s narrow and easy to catch them in it.

I looked for the leg hook I made the other day but couldn’t find it. I know I put it someplace I could find it easy, but it was out of sight for now so I didn’t need it anyway.

I basically drove the chicken’s into a narrow spot and put my hand on the back of the selected chicken and pushed it down and then was able to grab it’s legs and put it in the small cage. 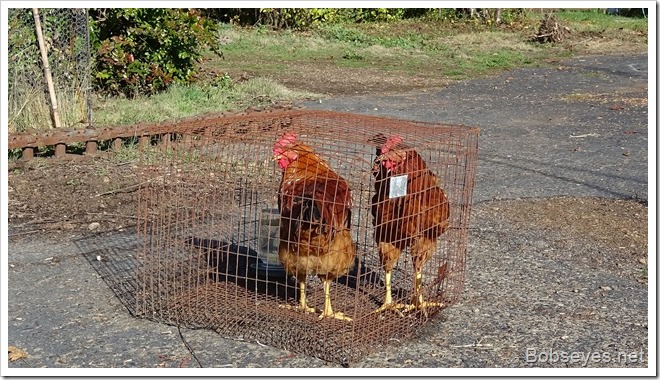 A small reprieve for the chickens

I wasn’t ready to work on the chickens yet so I put them in the sun and gave them some water until I was ready for them. They did a bit of crowing while in the cage so I selected the right ones. These birds are New Hampshire’s about 22 weeks old.

Finished up the grow panel welding

I waited a bit for the sun to come out from behind a big redwood tree and shine on this spot and finished up the welding on the grow panel sides. 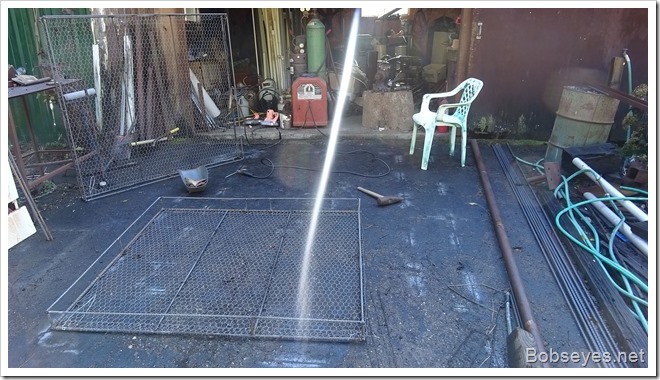 Cutting up the wire for sides

I still needed to put some wire on those sides but first I had to cut it into four inch wide pieces which took awhile as I had to cut all those wires, one every inch.

Here’s my wire cutting set up which took most of the rest of the day, on and off to give my cutting hand a break. 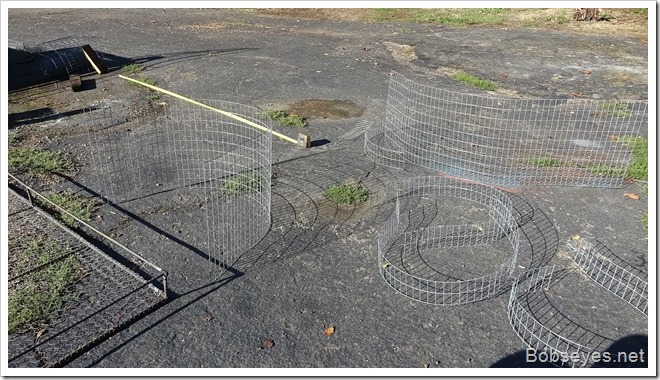 Not my favorite job

Late in the afternoon I started work on the two roosters. Since the last bird I did had a bunch of pen feathers to remove I decided to just skin these two out as it would be faster. As it was one of them had pen feathers and the other didn’t. Processing time is about fifteen minutes doing the skinning process with about a half hour setup and a half hour cleanup.

The bird waste got buried in my blueberry patch by a plant.

With those two birds gone it was nice and quiet out now. The flock seemed to be more at peace too when I let them out just after four.

Here’s a few of the flock out grazing in the yard. 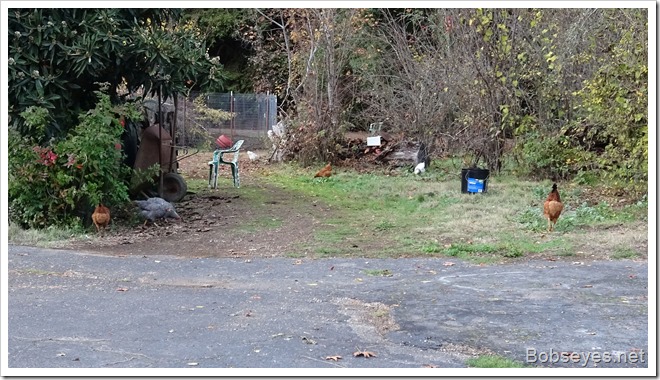 Poo for an apricot tree

While the birds where out grazing in the yard I got the wheelbarrow and loaded it up with dirt from the main pen. The dirt should have lots of poo in it so I’m going to put it on the ground on an apricot tree I’d like to see start fruiting. By putting the dirt on the ground under the tree the rain will wash the goodies into the ground and hopefully dilute it too. I’m not sure how much poo is in the dirt so I’m going to spread it thin just in case as I don’t want to burn the tree with it.

Back is slowly improving

My back is doing a bit better as I’m sorta able to stand up right mostly. It’s still fairly painful when I do most anything but there is improvement. I do something and hurt then sit in my chair until the pain settles and then do something else.