Chick Feeder Test, Some Work, Some More Yellow Jackets and a Fire Somewhere

I needed to test my new chick feeder pen to show the chicks where it was and to see how the bigger chickens do.

Part of the reason I constructed the chick feeder pen was so I could feed the little chicks special food when I thought they needed it.

So I got a dozen of their eggs and scrambled them up for them. It didn’t take long for them to smell the eggs once I put them in the chick feeder pen and they all came a running.

Here’s the pen in action with the larger birds kept out. 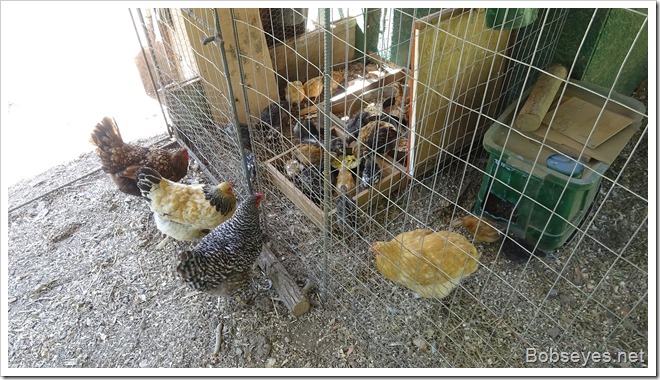 I watched the feeding action and I noted there were still a couple of the littlest chicks not getting any egg as they were small and too timid to get any egg. The other chicks ate all the eggs so the smaller ones didn’t do well.

The remedy I hope

To remedy that I plan to feed only half the scrambled eggs next time so the go getter chicks will eat all the eggs up and feed on the seed that is also there. Then when I add the rest of the eggs those birds will be too full to eat any more egg and the smaller chicks may have a chance to get some egg. At least that’s what I’ll try tomorrow and see what happens. Otherwise I’ll have to catch the smaller chicks and put them in a box to get them any eggs so I hope this method works as catching little chicks isn’t always so easy.

Working on my new spring tap

The next thing I wanted to do was do some more work on my new water spring tab and trail for the pipe down the hill. I had the tools I’d need already up there so I hopped on my brothers dirt bike and headed on up that way.

On the way I  had to stop and remove enough of this little tree that fell down yesterday to get by. 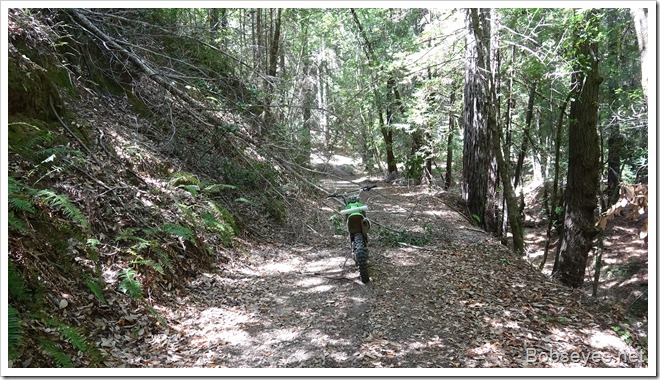 Rounding up some water pipe

Yesterday my brother Tom told me about some black water pipe he saw up in the woods just above where I was working on the new spring so I went up to see if I could locate it.

I found it right where I’d left it a number of years ago. I think I was going to tap some  spring near here but never did as they didn’t put out much water.

Anyway here’s the black water pipe I use to move water around the hills right where I left it. 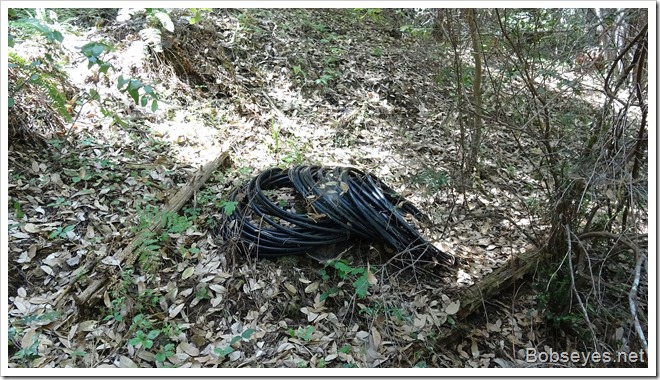 I hauled the roll of pipe down to my work area at the new spring spot for use later. 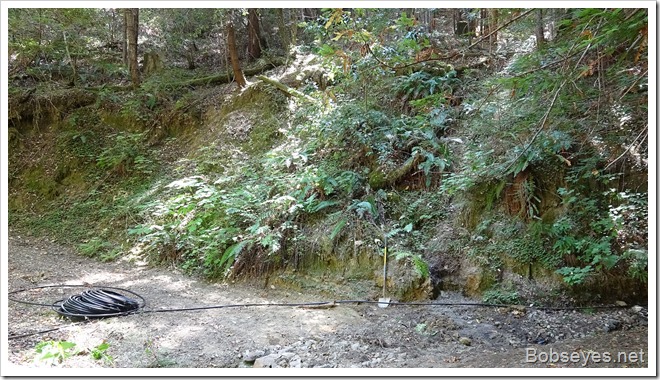 Next I dug and hauled a few more half buckets of blue clay up to the new spring dam. I dumped it there to do some work later in the day.

After a break I did some more work on the pipe trail I’ve been working on along this spot. 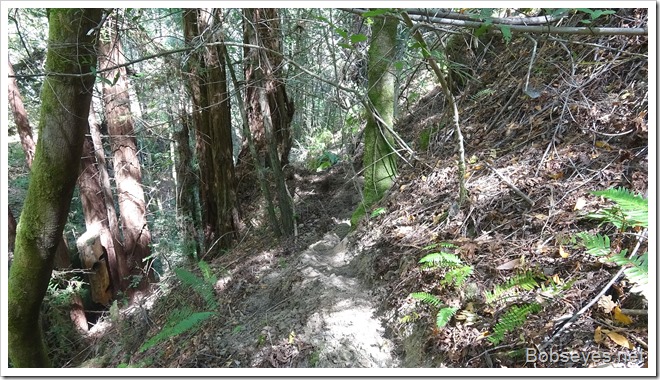 While I was working on the trail I heard a  fire siren going up the road by my house. They turned off and headed off in another direction  but soon there were fire fighting planes in the air but I couldn’t quite tell where the fire was. Eventually a chopper joined the fight.

I was working just under this stump when a yellow jacket stung me in the forehead. I retreated quickly and only got one sting so far today. 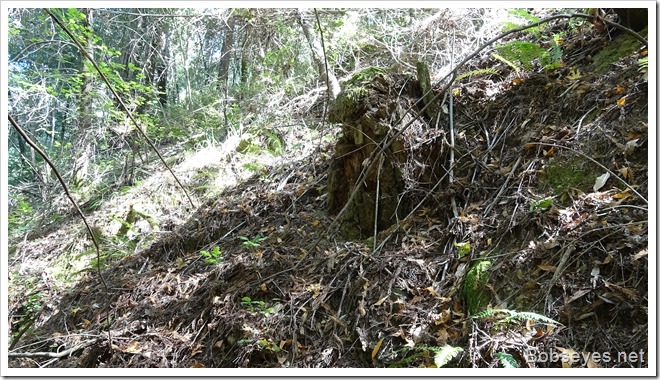 After a break I walked back to look for the yellow jackets hole being careful not to move too fast as I wasn’t sure where the nest was yet.

I located the bees going into a hole at the base of the stump  here. 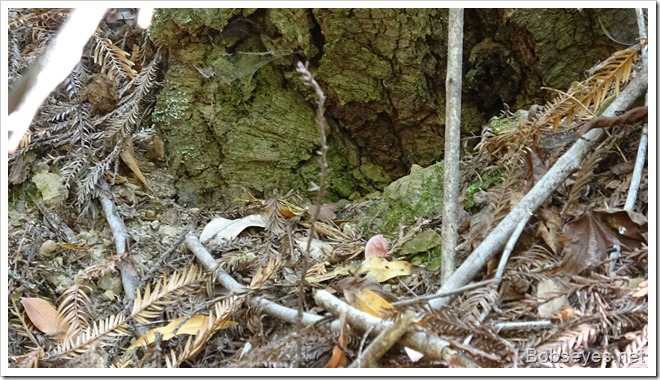 I’d checked the other nest I tried to destroy the other day with gas fumes and it was still active so I needed to do something different. I’d come back near dark to spray them with gas again. Yellow jackets go to bed just before dark a lot like my chickens so I’d come back later.

So more trail working was off for now which was good as I was tired out enough.

So I hopped on the dirt bike and rode up to the ridge top to see if I could see where the fire was, but I couldn’t see in that direction from the ridge top. 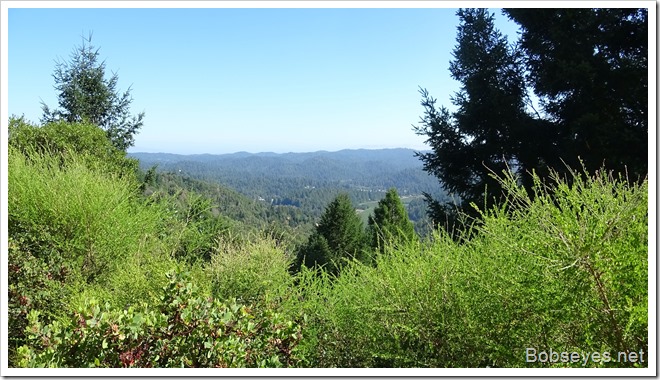 I could see the small town of Guerneville though. 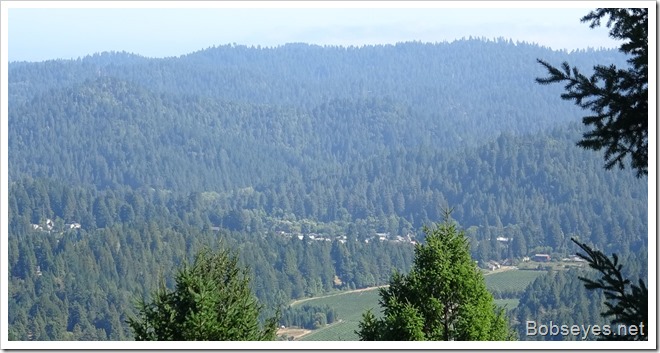 More water for the tanks

On the way down the hill I stopped at another spring we have as I thought I had a water pipe there with water I  hadn’t hooked into the system yet.

Yes there was about a half gallon a minute coming out so I hooked it into the main pipe and now that water goes into our water tanks. 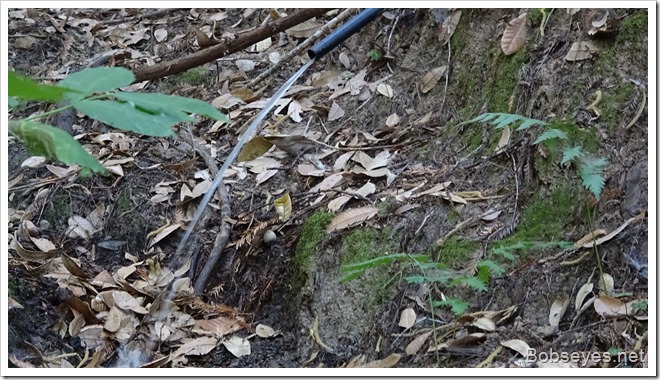 The spot I was in was a spot I’d tried to tap water a number of years ago and the water turned out to smell like rotten eggs and there was an iron bacteria there that caused things to turn rust red when the water hits the air. But last winter we had lots of rain, more than we’ve  had in a long time and maybe it flushed this system out because the egg smells where gone and the red rust stuff didn’t seem to be happening anymore.

Cleaning out the old spring

Best of all there was a lot of water going down the hill. I’d had a water tap there that was all plugged up so I cleaned it out a  bit so water would flow down the pipe again.

Here’s the old spring tap I cleaned out a bit. 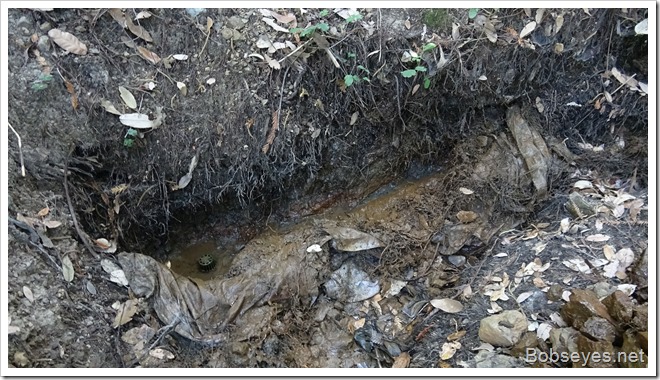 There’s quite a bit of water here I need to get into our tanks but I’ll have to clean things up first. Here’s the spring tap that needs to be repaired. 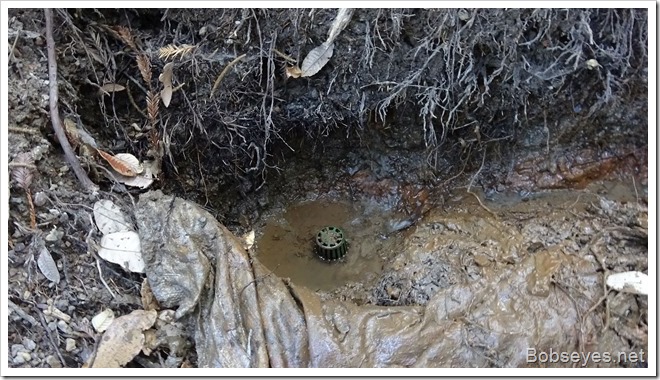 I didn’t measure that spring as I didn’t have a gallon can but I’d guess there’s about a gallon of water per minute coming out of this pipe which I need to get into our tanks. 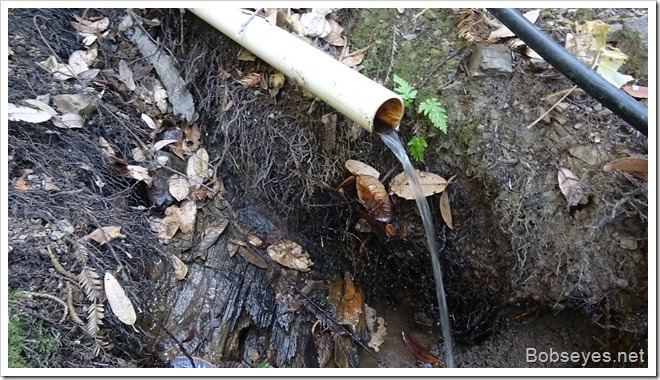 I did what I could at that spring and then continued on down the hill to the new spring area where I was working.

I wanted to add some more clay to this spring dam and change it around a bit. You can see the blue clay I hauled up a bit earlier on the left. 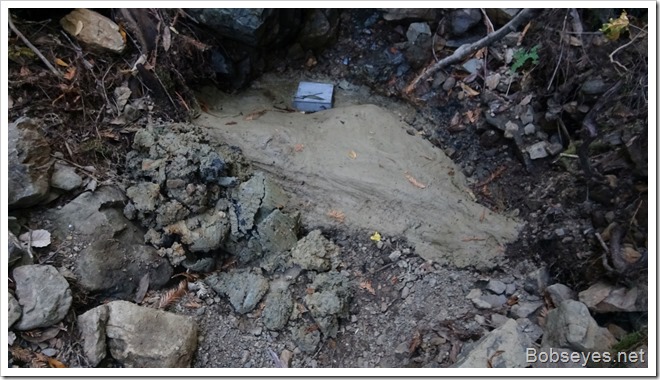 I built up the dam thicker and cut a water drain in the middle. I don’t need a high dam to get the water. The dam is for the winter rains to wash over the whole thing so it doesn’t wash it out. My next step is to start adding rocks to fill in the sink so there’s no place for critters to lurk in the water. 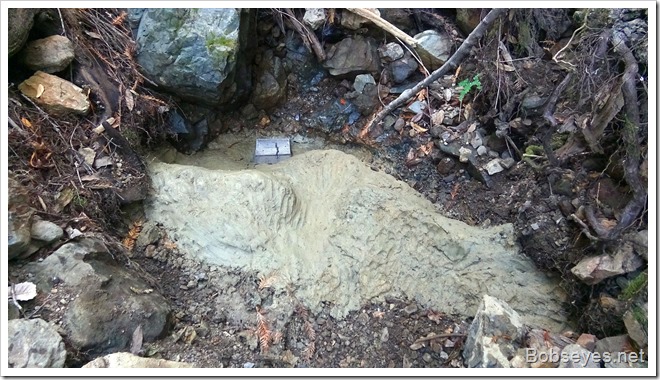 After that I was pretty tuckered out so I rode on home and had something to eat and a short nap.

Chickens in the carrot patch

I was getting ready to go up the hill just before dark when I heard my brother Tom complaining about my chickens being in his carrot patch which was his own fault as he let them into this area when he went through one of my gates. The chickens found a way through this gate so I had to plug it up with some wire which should do the job. I don’t think the chickens did much damage to his new carrots. 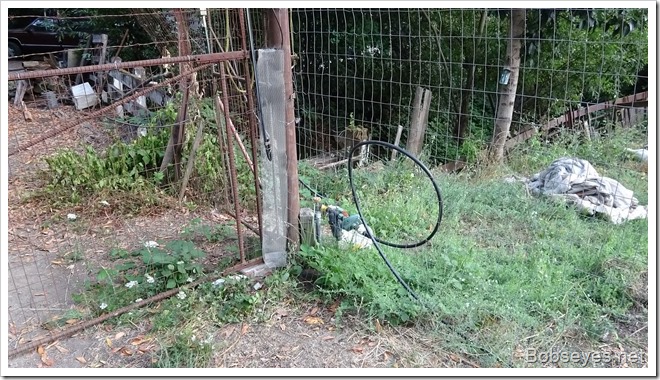 Rode up the hill to kill yellow jackets

I rode the quad up the hill with  my garden sprayer and gas. I walked up from the bottom to get another angle of the shot for the gas as I don’t really know exactly where this ones hole is at. I’m working on the old one first. When I throw a stick at the top of the stump yellow jackets start buzzing over the top of the stump. I suspect they have a small hole down into the stump from the top of it. There’s the stump there as I approached it to gas it again. 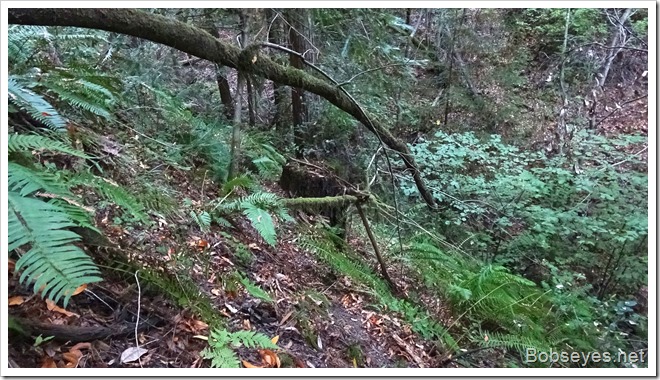 It was almost dark so the bees seemed to be mostly home as there were none buzzing around as I approached. However it wasn’t dark enough yet as one of them found me and got me in the neck on the left side.

I gave them most of the gas and then went around the area to get to the next nest I found earlier today. I knew where the hole of that nest was located so I gave them the gas and left to head back to my quad runner that was parked at our water tanks here. 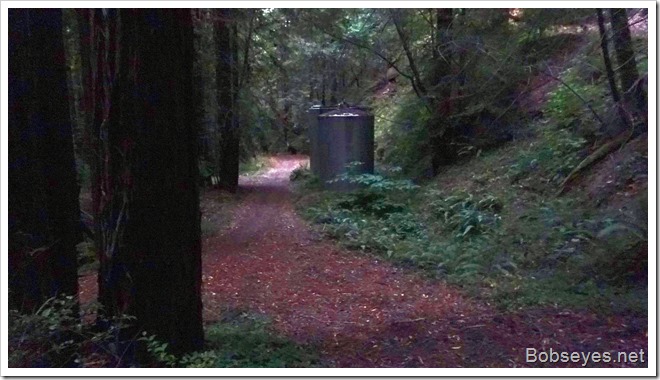 I checked the tanks water level and things are looking good as it’s slowly filling them back up.

I rode on home in the dark. Good that the quad has lights the dirt bike doesn’t. Tomorrow I’ll see if I got the little buggers.

That was my day, another nice one working away.