Checking the Fire Rehab Area and Locked Out Chickens

After yesterday’s rains today’s sunshine was welcome. I took care of the chickens and got something to eat myself.

After that it was out in the yard for some chair hopping and enjoying the day.

I usually let the chickens into this pen early in the day. 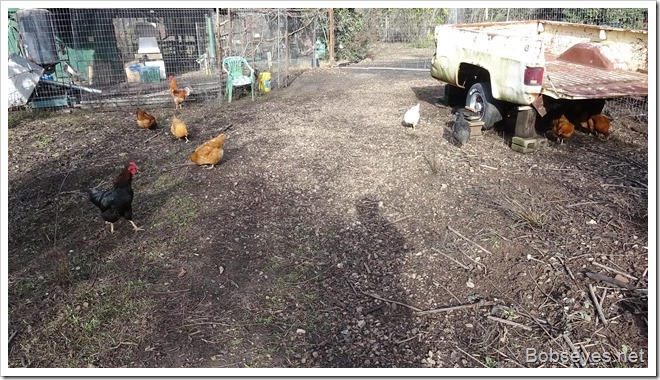 It was so nice out some time later in the day I decided to take the dirt bike up into the hills and see how all the forest fire breaks were holding up as far as erosion control.

I checked the bikes fuel and all was good so I started up the bike and headed out my main gate and across the road and up into the hills. 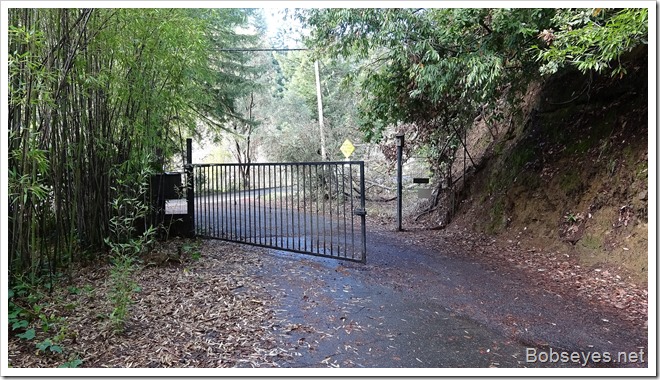 I went by our water tanks and they were full as they should be this time of year. It’s always good to check the water level just to  make sure no  matter what time of the year it is as we depend on this water to live on. 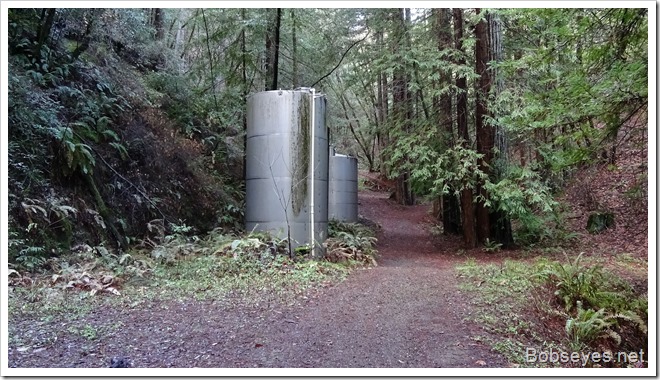 I rode on up to the ridge top to this fire break and looked around. It all looked good with no erosion and some grass and other stuff was just starting to come up. 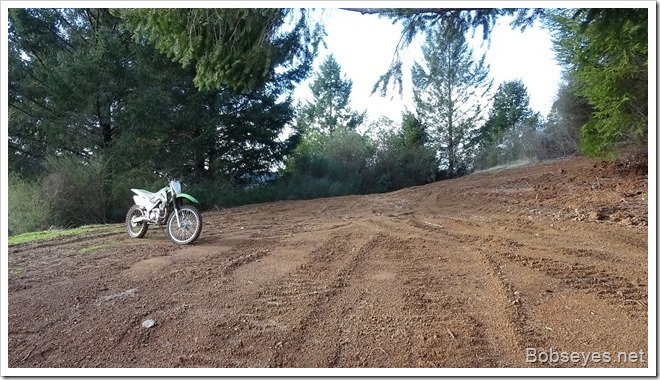 On the ridge top I rode around in the forest a bit to look for mushrooms. I did find this one near a place called Steve’s camp. It’s one of the best edible ones but a little old, about six inches across the top. 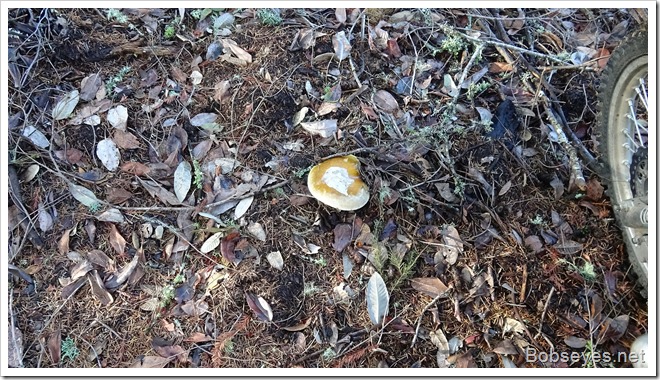 I continued on up the ridge to this fire break and it also looked real good with no erosion. 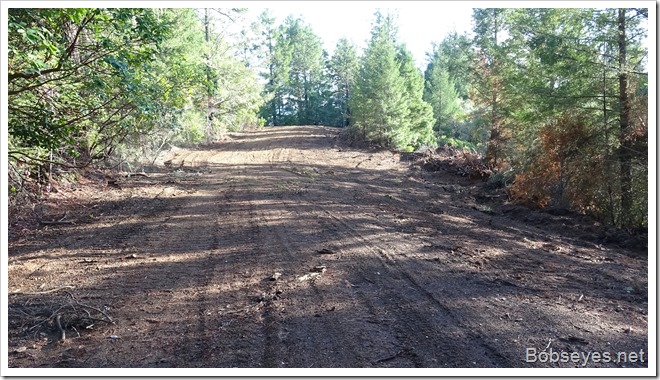 From there I took this road over to the biggest fire break where I did the most rehab work earlier in the year. 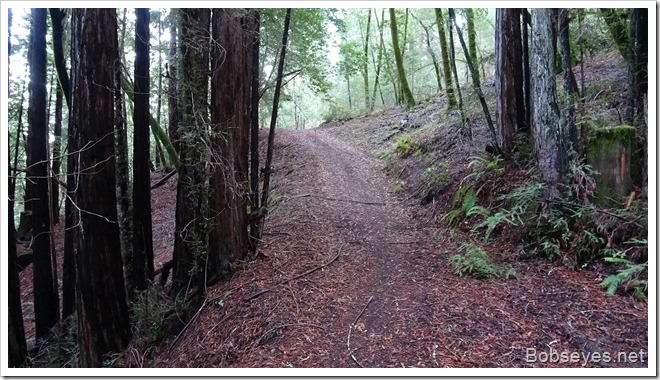 This is the largest fire break. Some very minor erosion but nothing serious. Things are looking good. 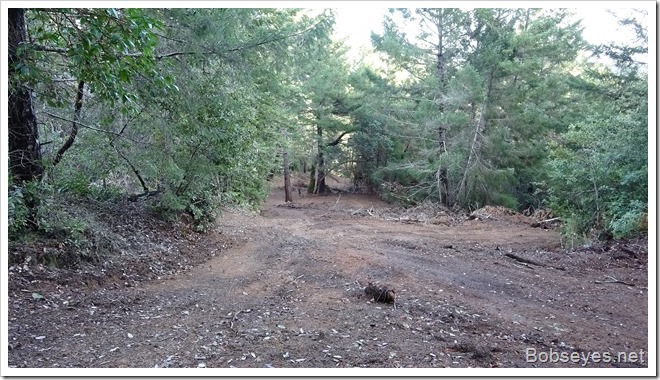 On the way back down the hill I stopped to move this rock off the road. Because this is the  hills there’s always something falling down on the roads. 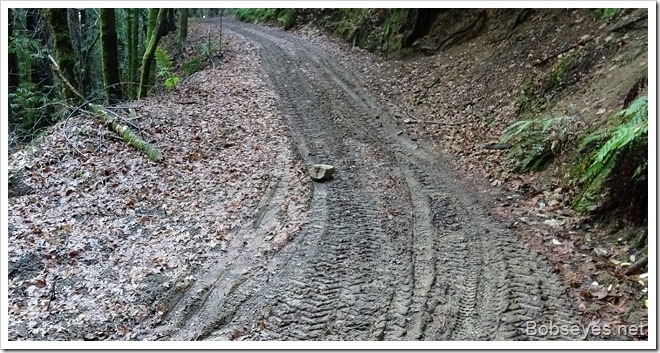 By the time I got back to my house it was past time to let the chickens into the front yard. I opened this gate to let them in and somehow it got closed before it got dark and half my chickens couldn’t get into their roost for the night. 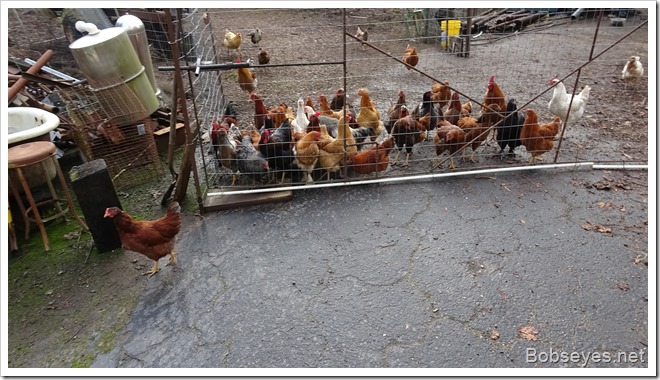 Anyway I let the chickens out into the front yard and went into the house.

Grazing chickens in the front yard. 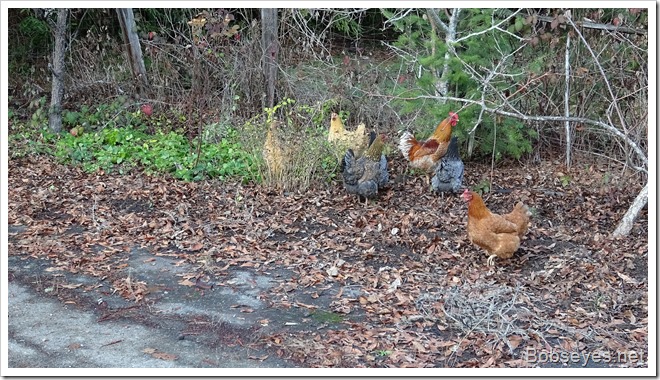 Just after dark I went outside with my light and heard a bunch of chickens clucking which is not normal so I knew I had some kind of problem.

That’s when I discovered the gate got closed somehow. Either I shut it not thinking or one of  my neighbors shut it. I think it was a neighbor.

So now the problem was how to get the rest of the chickens into the pen. Since it was already dark, that’s not so easy but I got a big stick and worked at it until they were all in there and no more clucks from outside the pen.

That was a lot of work so I need to make sure that doesn’t happen again.

With every thing nice and quiet now in the yard I went on in the house for the day.