I thought about going shopping today but it seemed like a better idea to go down to Jenner and kayak for the day especially since most of the stuff I needed to shop for wasn’t really needed right away.

And I thought maybe the Water Agency might have opened up the mouth as the water level was getting high from the closed up mouth.

So instead of going to the boat ramp I drove on down to the overlook off the highway which looks to the ocean over the river’s mouth with the river in the front, here. You can see a channel from the river to the ocean so the guys were here earlier in the day with  machinery to open up the mouth. Lots of debrie flouting around on the flooded river. 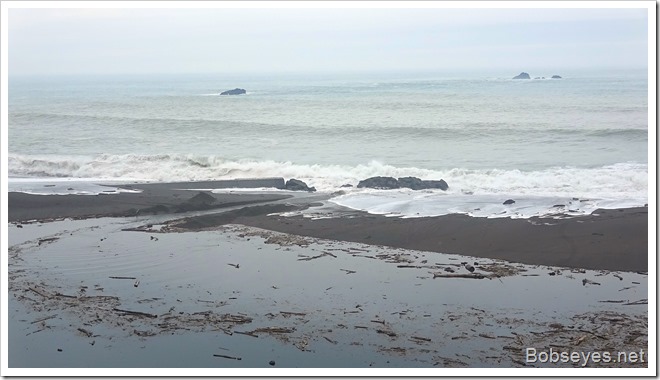 I was hopping to have a talk with one of the County’s seal people as I knew they were usually down at the overlook during a mouth breach so I looked around the overlook and spotted this truck with the scope set up in front so I went over to have a talk. 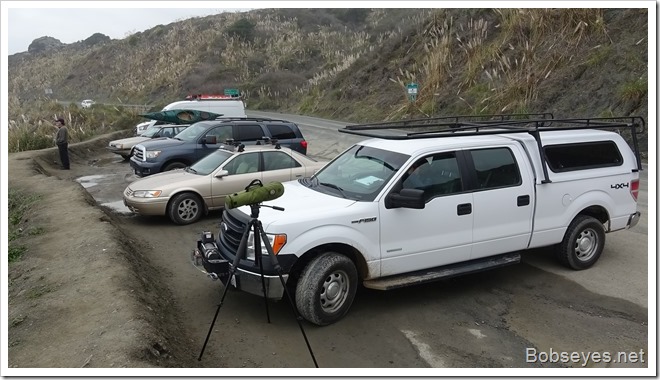 It turned out to be Andy, a seal lady I knew as she’s  been working here for a long time. We exchanged information and had a nice chat.

Get the boat in the water 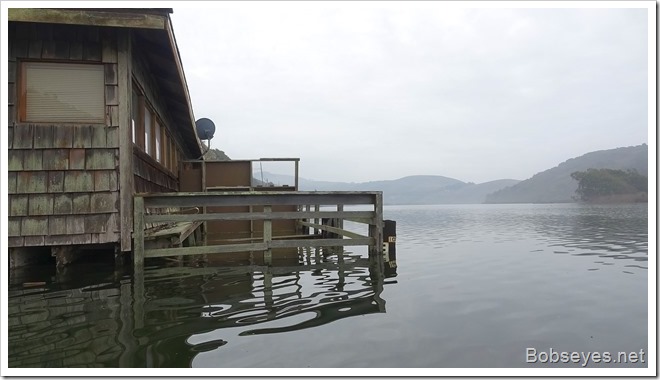 The day was light fog with almost no wind, perfect for a mystical day.

The water was mostly flat as I headed down river along the side of the island. 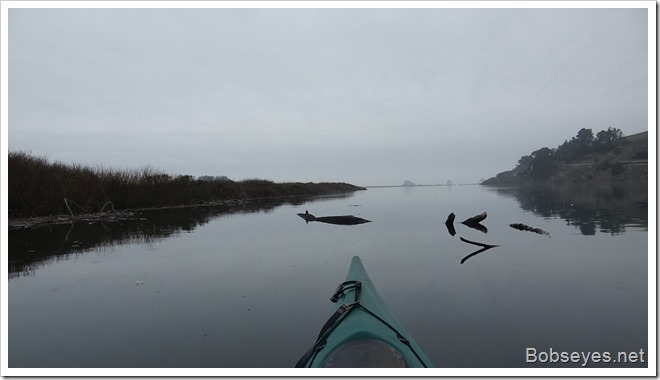 I paddled by this harbor seal resting on the logs. It watched me closely as I passed by. 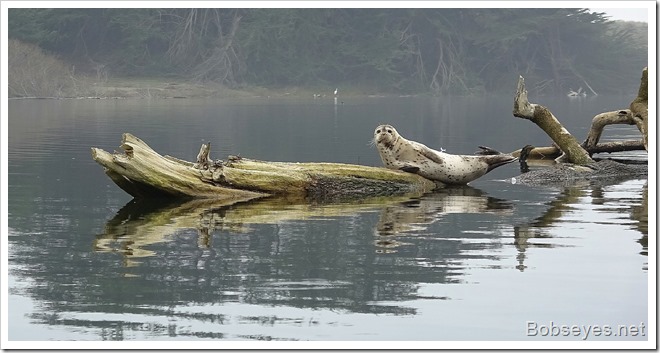 I was headed down to the river’s mouth area to check things out, just up ahead. 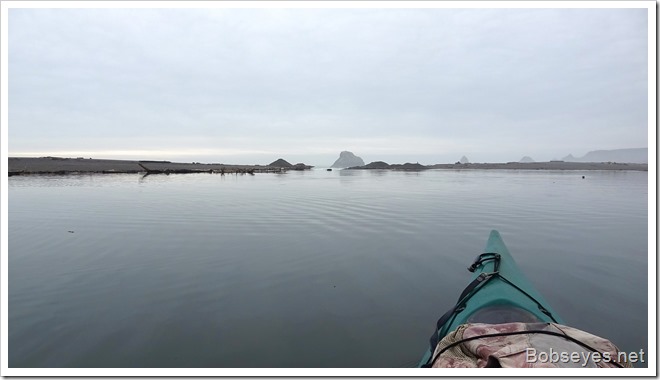 I approached the open mouth cautiously as sometimes there’s a lot of current and I sure don’t want to go out in the ocean. Note the big piles of sand put there from the excavator that carved the channel earlier. The one on the left will soon be gone and washed out to sea before I leave today. 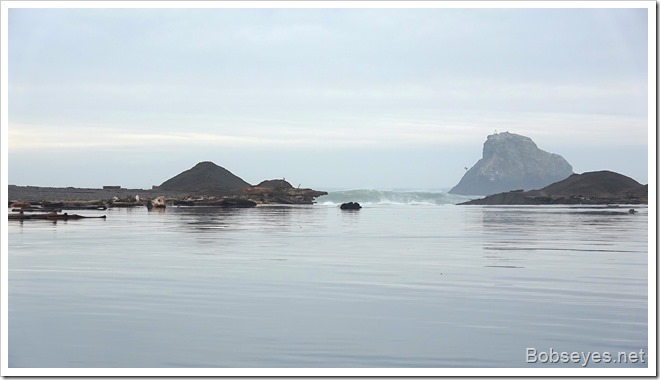 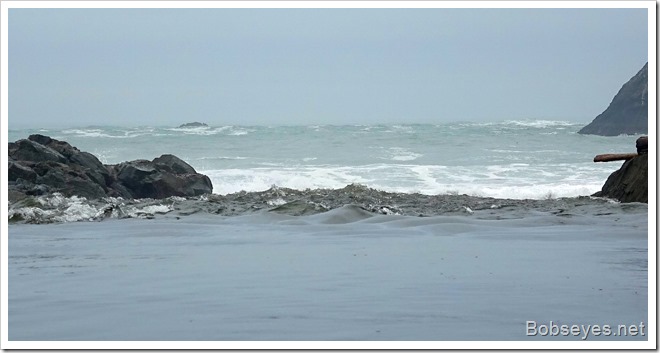 Another picture of that same spot as a big wave comes in. They were pounding the shoreline making a lot of noise. 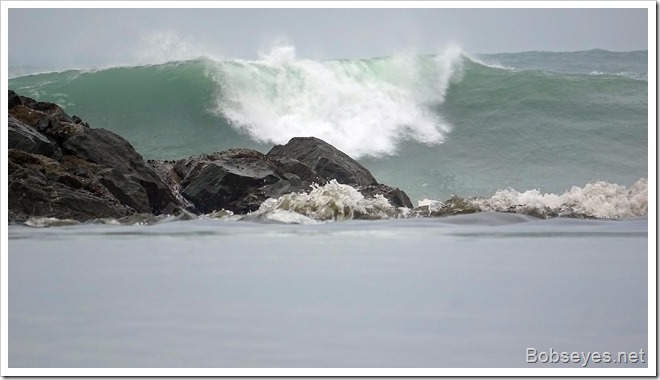 Low tide was at 4:30 and it was just 3 so I thought I’d leave and come back around 4 to see how much of the sand had washed out so I paddled on over to where the water had flooded Penny Island and paddled on in to this spot where I sat and enjoyed the day. This is looking out from the middle of the flooded island down towards the mouth area in the fog. 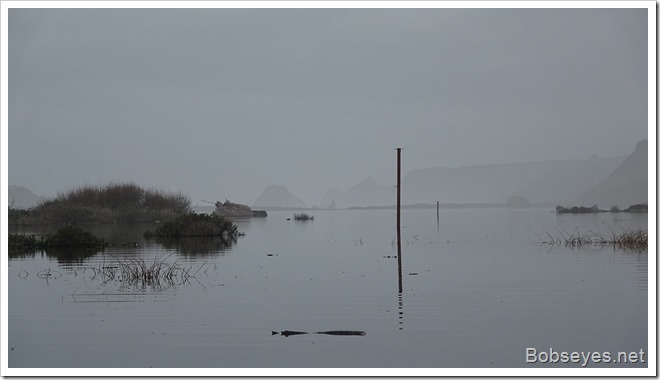 I paddled on back to the mouth and got there about four.. Note the sand piles on the left are gone and most of the ones on the right too. The sun is going down but didn’t put on much of a show. 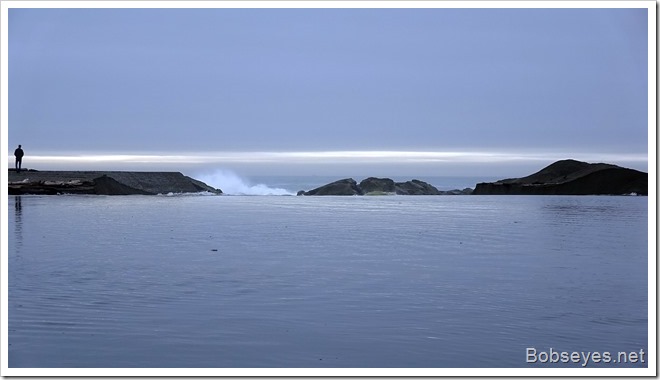 I paddled a bit closer but couldn’t get very close as the current had picked up a lot by now so I had to be extra careful. 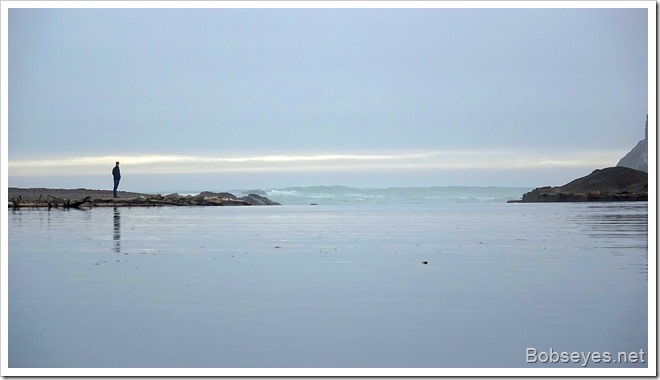 I was hoping to see some spawning big fish come in so I waited around as long as I could but the mouth was taking a long time to blow out which let’s the river level down then the big fish start coming in from the ocean and the seals usually work them over but I had to leave before that happened.

Once last look out the mouth and I turned and headed on back as the day was starting to dim. 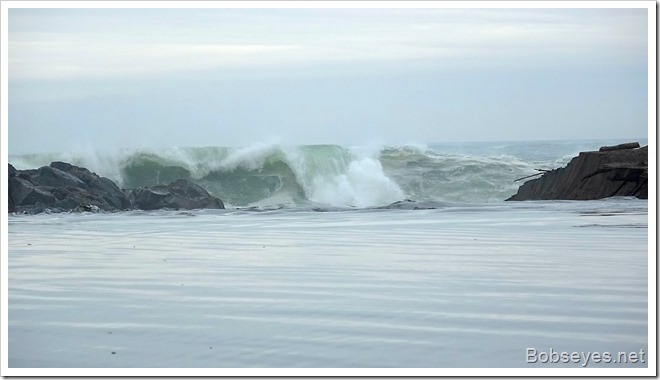 This merganser duck and I went past each other on the way in. 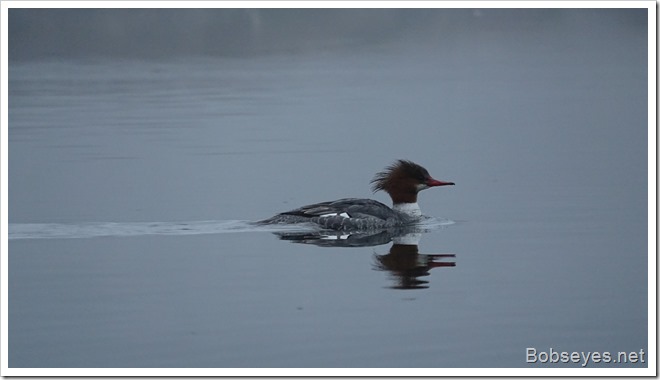 Living life to the fullest

Lights were coming on but I saw a lady I knew in the house on the left so  stopped and chatted with her for awhile. Since I know a lot of people on the river it seems I have to stop and shoot the bull a lot but that’s all part of the enjoyment of living here and living life to the fullest. 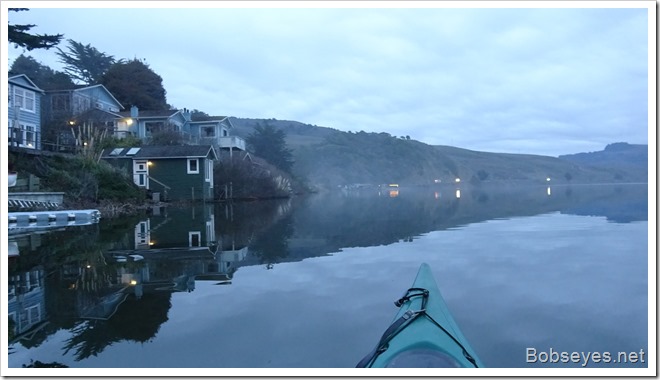 Just a little ways to go to the boat ramp. 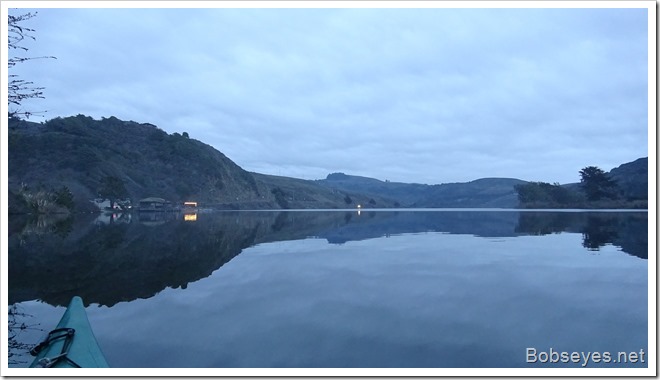 I checked the water level gauge at the boat ramp and it showed the river had dropped about a foot so far. It should be down all the way by tomorrow morning.

With the mouth opening up there should be a lot of fishermen on the river tomorrow so maybe that’s a good excuse to go again tomorrow.

I drove on home and since it was dark the chickens where all in and on the roost so I shut them up and went on in for the day.