Checking Out the Flooded River and Driving Through the Flood Waters

It was raining again this morning just as the weather guys said it would, but not quite as hard as they’d predicted.

Not wanting to hang around the house all day, I got in the car and headed down the road hoping it wasn’t flooded by the school.

More water than I thought

It was, but not as bad as the other day when I decided not to try and go through it. But today, it was down a bit and I thought it would be about six inches deep. As I drove into the water I was having second thoughts about driving into it as it was a bit deeper than I thought, more like about a foot deep. I was too busy driving to take any photos.

I made it through ok and drove to the gas station to gas up. Then I drove into Safeway to get some corn less ice cream to satisfy my craving. There’s only a few of them that are corn less and I wanted chocolate, but no chocolate. The other one was coffee which they had, so I bought one of those. I wanted it to warm up a bit so I didn’t dig into it yet. I put a spoon in my pocket before leaving the house.

I headed on down towards Jenner stopping to check things out as Monte Rio which looked like this looking at the river coming under the bridge there. 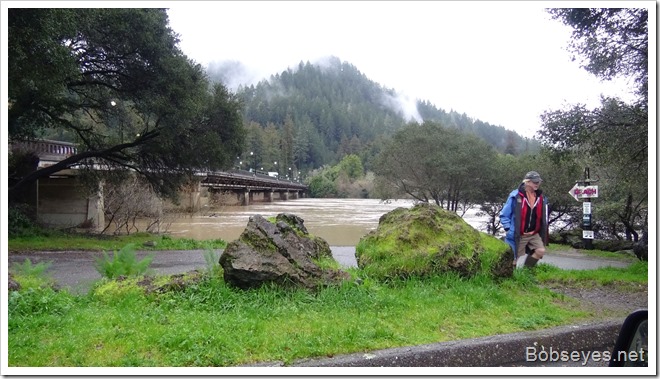 I still needed to give that ice cream some more time to warm up so I didn’t dig into it there, but continued on down the road toward Jenner. There were quite a few of these small flooded sections on the road down and it was still raining pretty good. 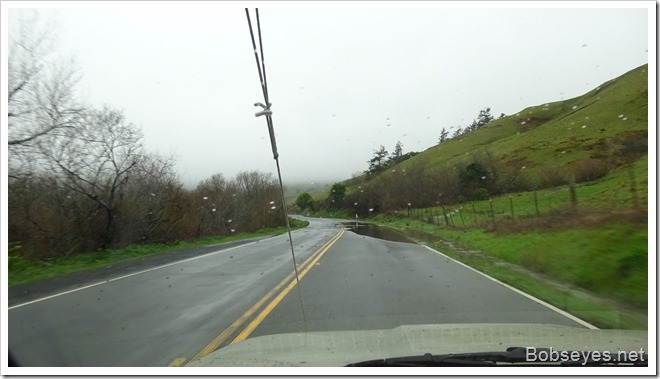 Dug into the ice cream

I drove on down to the overlook at the mouth and had a look and dug into the ice cream. Yummmm.

Back to the overlook

After a bit I turned around and was headed home and passed by John Sundberg headed towards Jenner, so I turned around and found him at the store getting some coffee. I continued to indulge in my ice cream. When he came out, I suggested he lock his truck up and jump in the car and we’d go back down to the overlook which we did.

By now the rain had mostly stopped so we were able to get out and stood around shooting the bull for about an hour.

Here’s what the river’s mouth looked like from the overlook as we shot the bull. 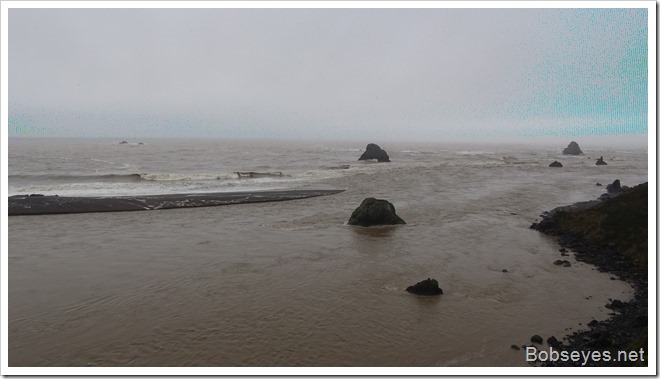 Ocean buries the jetty back up

If you’ll remember the other day the cement jetty was almost completely exposed from the recent rain storms, but today, the ocean had pretty  much completely covered the jetty back up with sand again as can be seen in this picture. All that shows now are some rocks on the end. 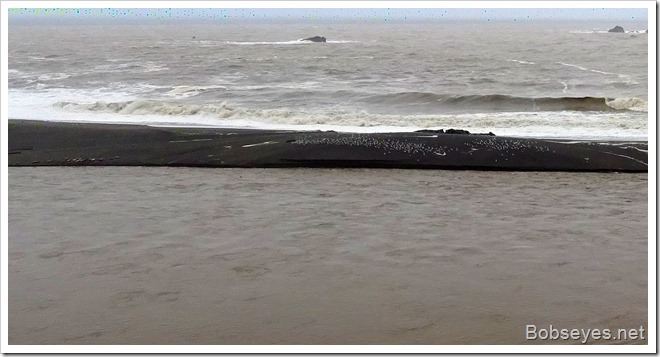 This shot is looking south towards Goat Rock down there and it’s starting to rain again. 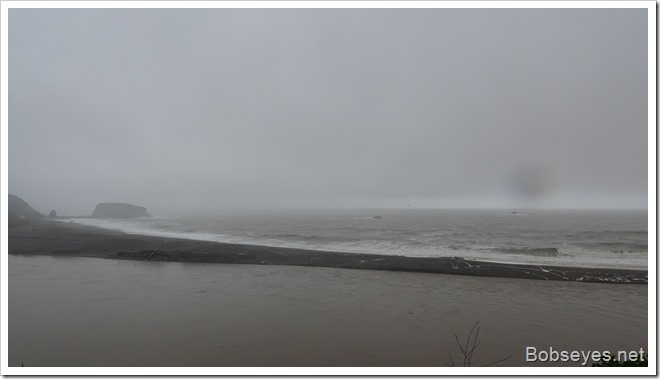 Another guy named John from Jenner drove up and we were talking about the eagles we’ve been seeing around the area and when I looked down at the jetty, I said, isn’t that one now. Sure enough it was. 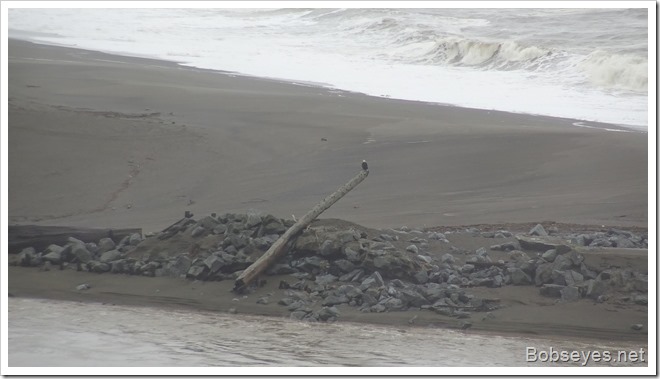 I took John back to the gas station at Jenner and headed on home. I’d decided that if the road home was flooded like this morning I’d take another road home so I had a look.

Roads not flooded too bad

It was still flooded, but not as bad, so I waited for this car to clear and drove on through. 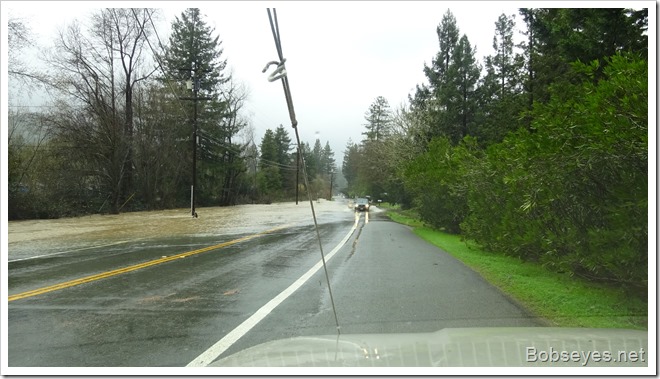 Here I’m driving on through. That’s the creek on the left. 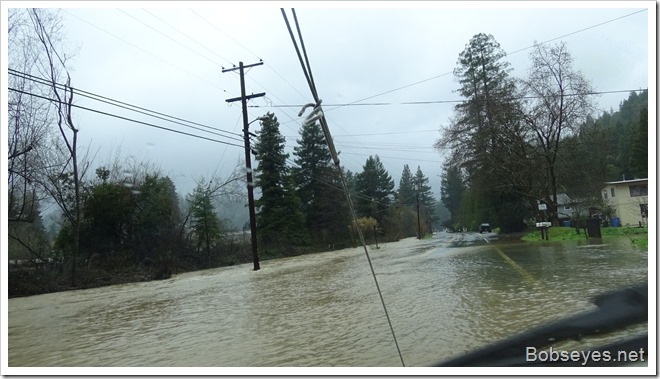 I drove through and turned into the school road to visit Ray and his wife that lived there.

Road crew has worked on the wash out

As you’ll remember the road there was getting undercut the other day so I had a look at that. The county road crew had been there and put some big rocks in the undercut and the creek was flowing muddy from last nights rains. 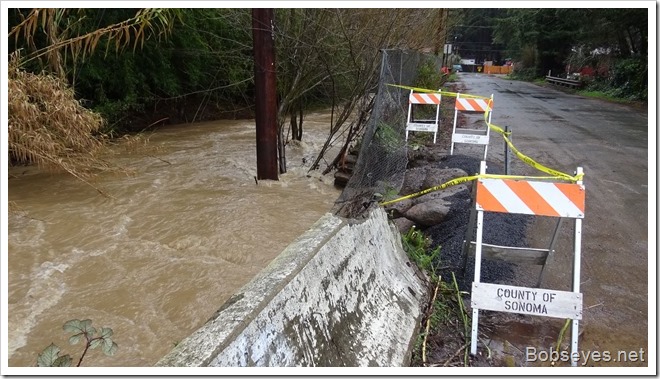 I walked over to Ray’s house and visited with him and his wife for a bit shooting the bull, then drove on home.

There wasn’t much daylight left, so I hung in the house and that was my day.