Checking Out a Neighbor’s Spring and Some Old Memories

Checking out the spring

Rob, a neighbor that lives up in the hills asked me to check out another neighbor’s spring that also lived up in the hills, but at another location, more to my north, Rob is to my west and I’ve been helping him tap his spring.

Anyway he said he’d be up there doing some work, so I decided to take a ride up there to check things out.

The guy lives up in the hilltops just off to the right of this picture. I’m driving to his place on his dirt road driveway. Unfortunately a couple years ago, during the forest fire, his place got all burned up and he’s working on putting it back together. 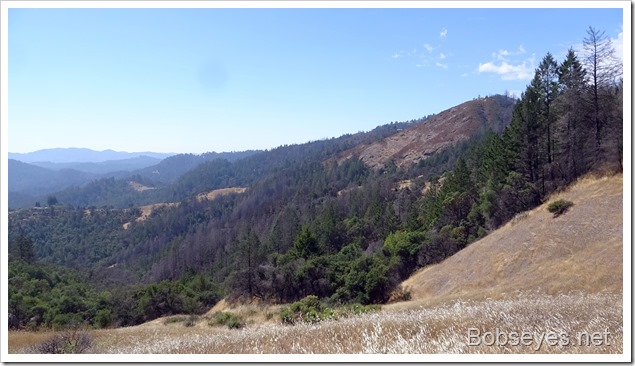 I drove into his place and found him and Rob doing some work so I parked the car and met Dave. 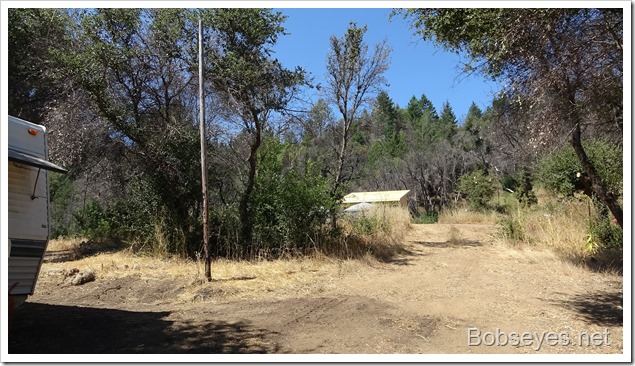 Now, when I was a kid, around 15, us kids used to ride our mountain scooters around all these places as at that time there weren’t many gates like now. Anyway, this place had a house fully stocked but no one was ever there. And it had a real old orange tree and that’s why we’d ride over to here to eat an orange or two when they were ripe.

We walked up to his spring area so I could check it out and for some reason, likely too much bull, I didn’t get anymore pictures.

His spring was mostly not working as the hookups were broken since the fire and he had an old cement box in the ground to catch the water which is something I learned was not the good way to tap a spring. We talked about what he needed to do about setting things up my way which he will do then I will come back and have another look and get him some water.

Something else to checkout

After that we shot the bull a bit more about the history of the place and Rob left to go somewhere and I followed him out but at the main road went the other way as I had something else I wanted to check out.

I drove about a quarter mile down the road from the hilltop to this spot. My old friend Bryce owns it and I used to come up to do stuff with him, especially a lot of riding around the hills. His folks were original Italians that settled here sometime after the 1850 gold rush. They didn’t have much and they farmed the area and mostly lived off the land like  most people did in those days. 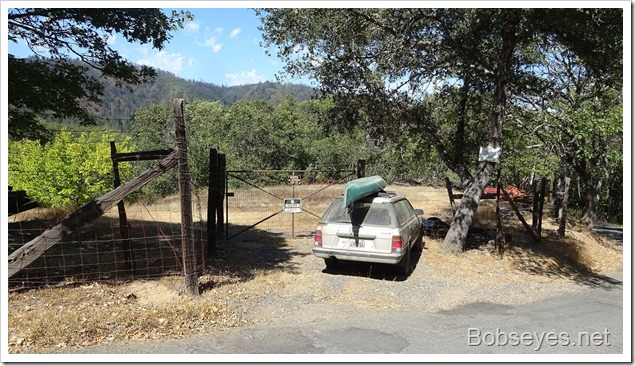 I had an old key for the gate and it still worked so I walked on in. The forest fire came through here a couple years ago also and burned a lot of his orchard and stuff down.

But his real old barns are mostly still standing. These are some of the originals of the farm. 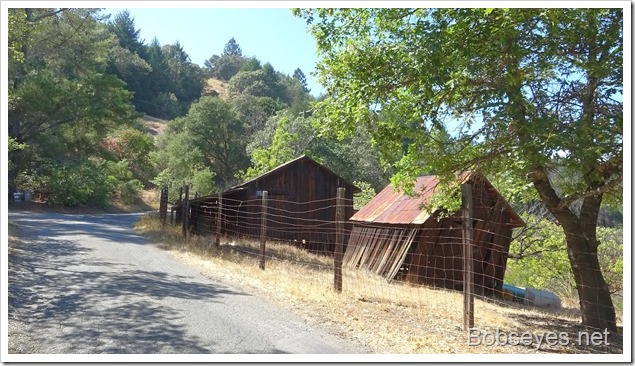 I looked in one of them to see if  his dozer was still there and it was. I operated that for quite a few hours building roads and stuff up in these hills. 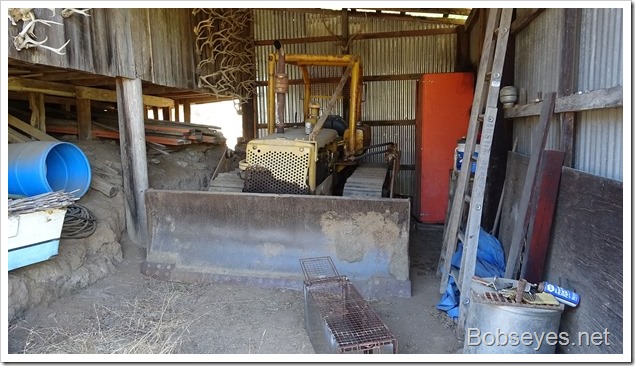 I took a walk across his old orchard with this view. He used to  keep it emasculate in the old days, but he is older with Parkinson’s now. Seeing what happens to a person’s place makes me do some contemplating of older times thinking about what it really all means. 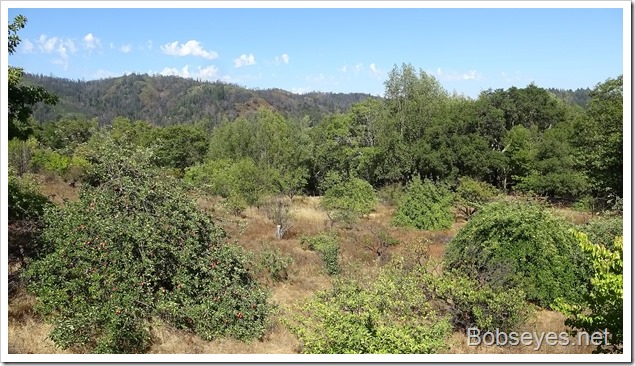 I looked things over and checked out the old man’s place that used to help him out. It was burned to the ground and gone.

I stayed a bit and thought about it all and then headed back over to where my car was parked by the barns. 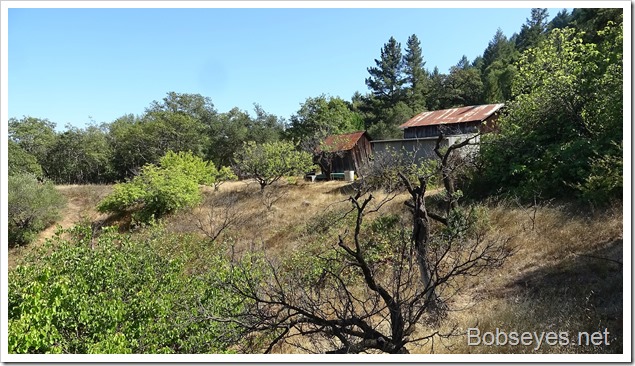 There’s still some of the original equipment parked there from the old days. 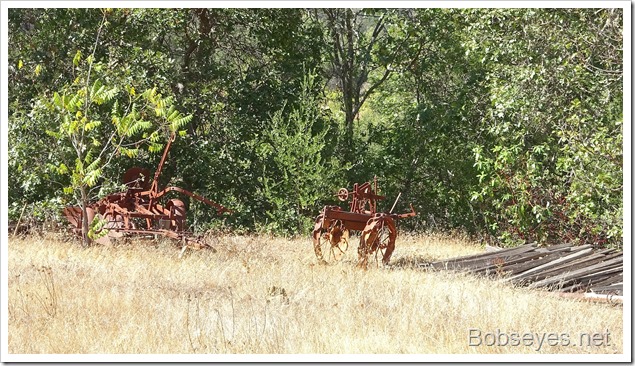 I was on my way home and going down the main road when I went by this old quick silver mine. My Dad worked there in the early days and I spent some time there with a family that worked there in my teens.

I stopped to get a picture and this guy was getting into his truck so I said hi. It turned out to be the guy’s kid I was just up looking at his spring so we shoot the bull for a bit. 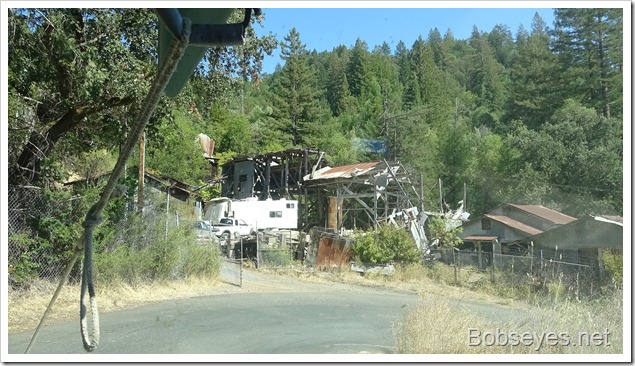 From there I drove on home about a mile down the road and was tired out so I napped for most of the rest of the day.

(Visited 118 times, 1 visits today)
This entry was posted in Uncategorized and tagged Old mine, Water spring tapping. Bookmark the permalink.