Checking Our Water Springs and Discovering the Leak Just Before Dark

Spring maintenance as in water

I got it going and let the chicks out of the coop and into their runs. Then I sat around for a good while.

A bit later I got the shovel out and did some digging in the mulch run for some worms for the peeps. I was hoping they’d get the idea and go for the worms as I dug so I didn’t  have to pick them up for them.

So I started to turn over some ground with the shovel and saying chick, chick, chick and  it worked. At least some of them were hunting worms as I turned over the soil and soon more of them joined in. 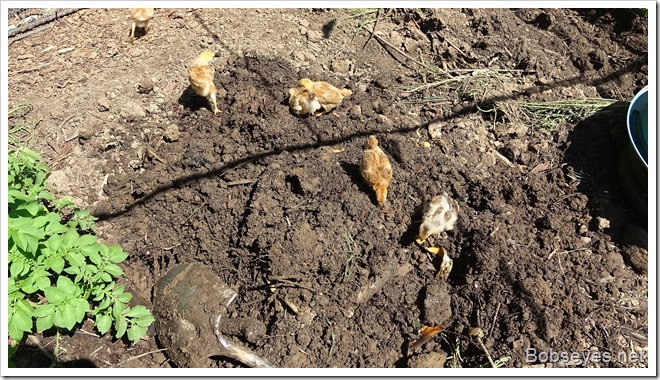 More of the chicks joined in the worm hunt. They get all excited over worms. 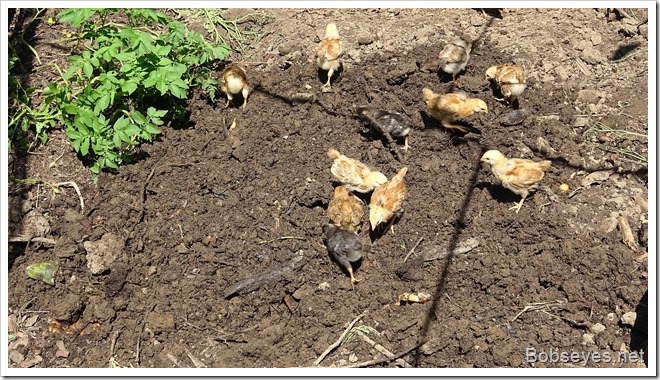 Riding up the hill to check on  our springs

In the afternoon I jumped on my brother’s motorcycle and rode up to our spring fed water tanks to see how they were doing as far as how much water was in them. 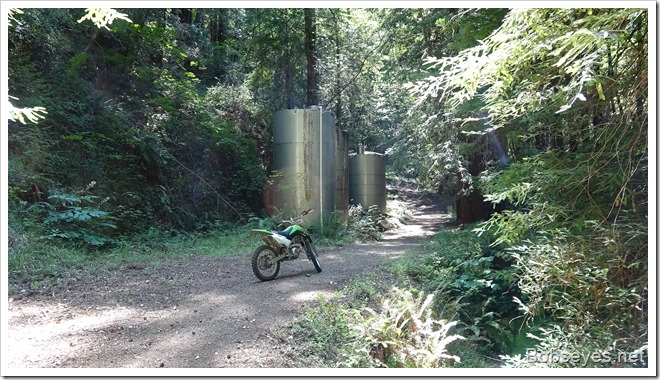 Only half full so did some measuring

Well, they were only half full which showed someone was using too much water or something?

The thing to do was measure the input from our springs so I had to walk up this gulch where I have some water valves to measure the spring inputs. 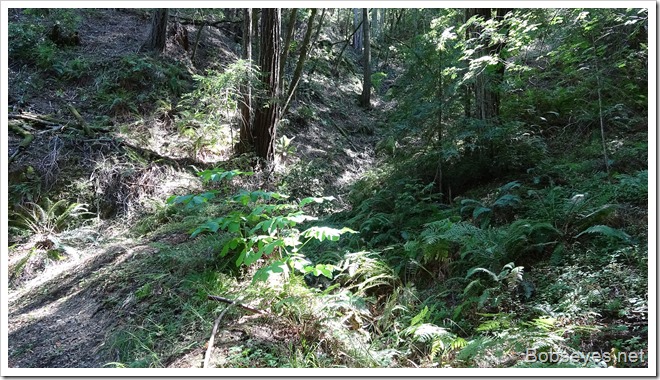 I measure the two spring lines here. I fill the gallon container while timing how long it takes to fill. 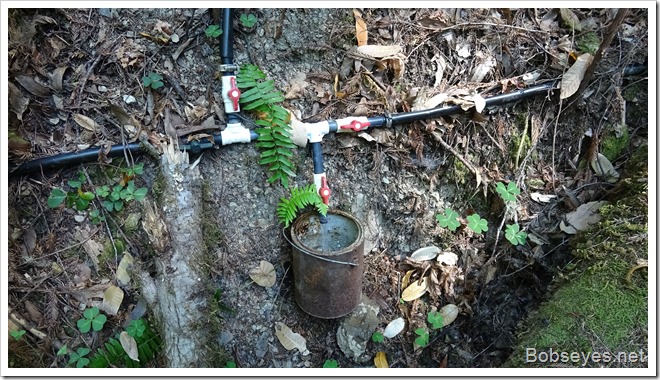 Springs slowing down which is normal

The main spring was one gallon, down one gallon from two the last time I measured them.

That meant I  should ride up the hill and check spring pipes and springs for leaks just to be sure it was only a normal slow down.

I headed back down the gulley watching my step. 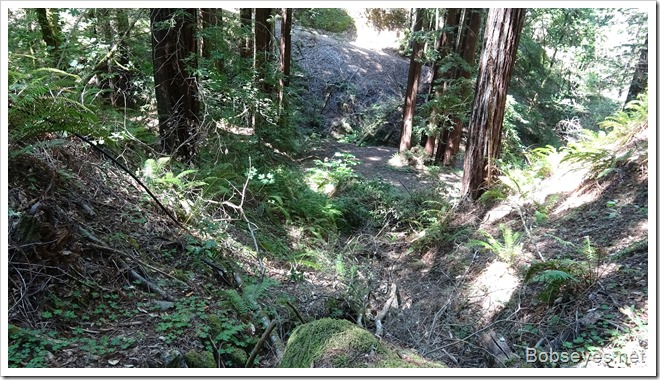 And back to the tanks where the motorcycle was parked. 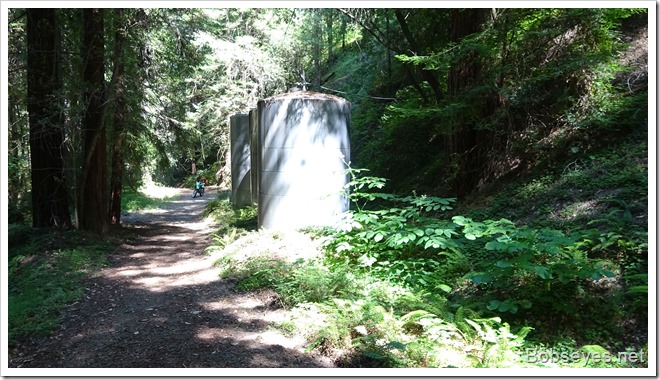 I rode up to this spring which we call Indian spring to check things out. I found about a gallon of water going around our main spring, but where it was coming out of the hill was not a good place to tap a spring. 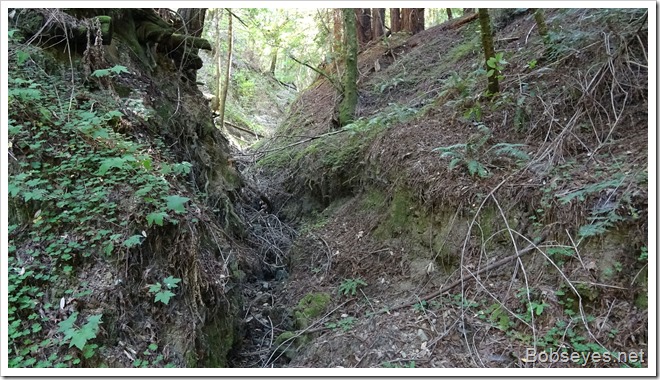 From there I rode to the top of the ridge and looked down on the town of Guerneville. 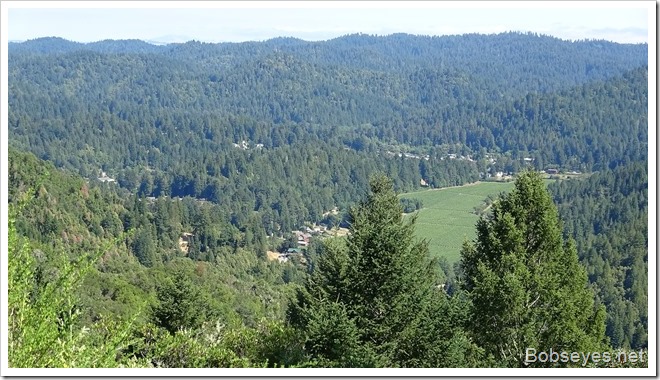 On the way down the hill I rode over to another spring and checked it out in these bushes. 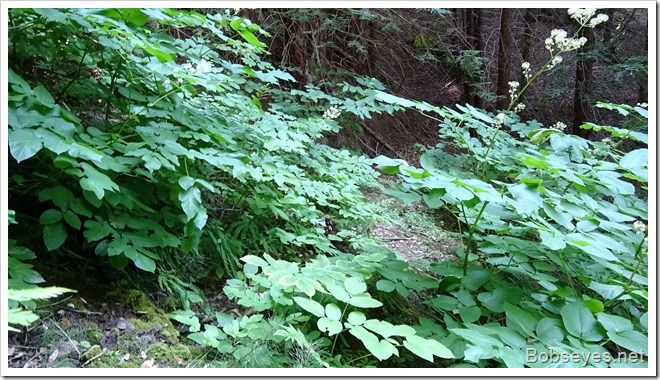 Advise Tom to cut down on watering

Everything looked ok so I rode on back to my house where I ran into my brother Tom and told him he’d have to cut down on his garden watering somewhere. He said he’d turn a well on and use it instead of the spring for one of his garden plots.

We discover where all the spring water is going

Later in the day, just before dark, I was making a cup of coffee when my brother Tom comes to the door and says I think I know where all the water is going, come on over to one of his rental houses.

So as soon as my coffee was made I walked on over to the house. There was a big leak in the wall which could be heard easily as lots of water was gushing out.

It was under the bathroom sink so I got under there and found the wall panel had been removed before and put back in a temporary manner so I removed them. There was a big leak in the copper pipe. My uncle had driven a steal nail next to the pipe to hold it in place and the nail was touching the pipe. Two different metals cause a battery which cause the copper pipe to get a hole in it. By the size of the hole I’d say that leak has been there a long time and finally got big enough to make enough noise to discover it.

We try a repair

I went back to my house to find a cap and my soldering equipment and a saw. My brother says just cap it as that pipe isn’t being used right now.

I cut the pipe and tried to solder on the cap, but when I heated the pipe water would come down and mess up the solder joint. I tried twice to solder the cap on. The second time there was a little sixteenth inch leak which would be ok until tomorrow. Tom is going to the hardware and get one of the newer bolt on copper pipe fittings that should do the job.

That should improve the amount of water we have for sure.

That was my day and a good one now that the water shortage problem is solved.